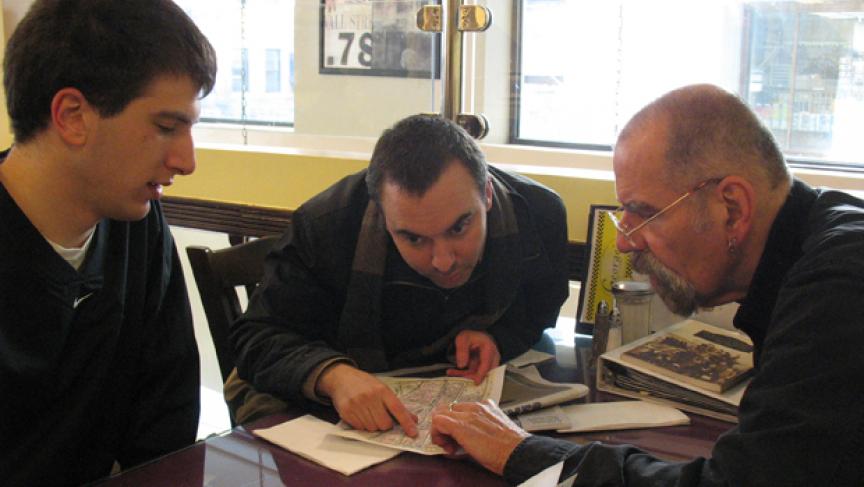 A funny mix of people are fighting to preserve the remains of a once-bustling immigrant neighborhood on Washington Street in lower Manhattan.

“I remember when I was young going to the World Trade Center, just to see it like any tourist would," he said. "My grandma and aunts would point down the street and say 'That’s where our history started in this country.' "

Todd Fine, a Harvard-trained historian is inspired by the neighborhood’s literary history.

“This neighborhood was the birthplace of a very significant Arab literary movement,” Fine said. “A number of writers — some of them we know very well, like Khalil Gibran, who’s a phenomenon — but others like Ameen Rihani, Mikhail Naimy, are lesser known. But they’re still very well-known in the Arab world.”

Joe Svehlak is a verbose New York City historian and tour guide whose Moravian ancestors immigrated to the neighborhood in 1912.

“There is no other neighborhood in New York that mixed these various different ethnicities as well as this neighborhood mixed it,” Svehlak said.

That these three should find common cause in saving an old building says a lot about the neighborhood that used to be here.

In the 19th century, the neighborhood, which covered Manhattan south of the World Trade Center site and west of Broadway, was the first stop for many immigrants arriving from Central and Eastern Europe, Greece and Ireland.

By the 1880s, large numbers of immigrants from present-day Syria and Lebanon were also arriving. The neighborhood came to be known as “Little Syria.” To the immigrants coming from the Arab Middle East it was also called “The Mother Colony,” since so many of them started their lives in the U.S. here.

Importing and textile stores lined the streets, along with tea shops and restaurants. A 1917 survey counted 27 nationalities living in the area. Joe Svehlak’s mother attended school in the neighborhood around this time.

“The first day she was a girl of 7 years old, not speaking a word of English and the only thing she recognized was her name being called. But she was in the class with the Irish, Lebanese, Syrians, with Italians, with Poles, with Ukrainians and as a result of that these young kids who were immigrants learned from each other and they became friends with each other.”

The vestiges of the immigrant neighborhood are nearly all gone — swept away first by the building of the Brooklyn Battery Tunnel in the 1940s, then by World Trade Center construction.

But one church, established on Washington Street by Arab immigrants, mostly Christian, remains. It once housed St. George’s Syrian Catholic church, and is now an official city landmark. To its right is a construction site that will soon sprout a 50-story tower.

To its left is a six-story brick building which, in the 1920s, was a community center for the neighborhood. Fine, Antoun, Svehlak and their “Save Washington Street” group are trying to preserve this building. It’s currently owned by the same developers who are building the 50-story tower. They wouldn’t discuss their plans for the building, and New York City has declined to declare it a landmark.

National Arab-American organizations are getting behind the “Save Washington Street” effort.

“We want to say ‘Yes, we’ve been here for a long time, we’ve been contributing to these communities,’ ” said Devon Akmon, Deputy Director of Arab American National Museum in Dearborn, Mich.

The museum is putting together an exhibit on the neighborhood. He said recognizing the area’s Arab-American history is particularly important because of its proximity to the World Trade Center site and the Park 51 Islamic center.

“The story in general is really quite moving to me in a lot of ways. I’m a third-generation Lebanese-American, my family came here to Detroit not New York. But just all that’s happened in New York. We see this exhibit and these buildings as a way of both healing and educating.” Akmon said.

A poignant reminder of this history turned up in the rubble of the World Trade Center site: In early 2002, workers there found remnants of another Arab-Christian landmark — the 100-year-old cornerstone of St. Joseph’s Maronite Church.