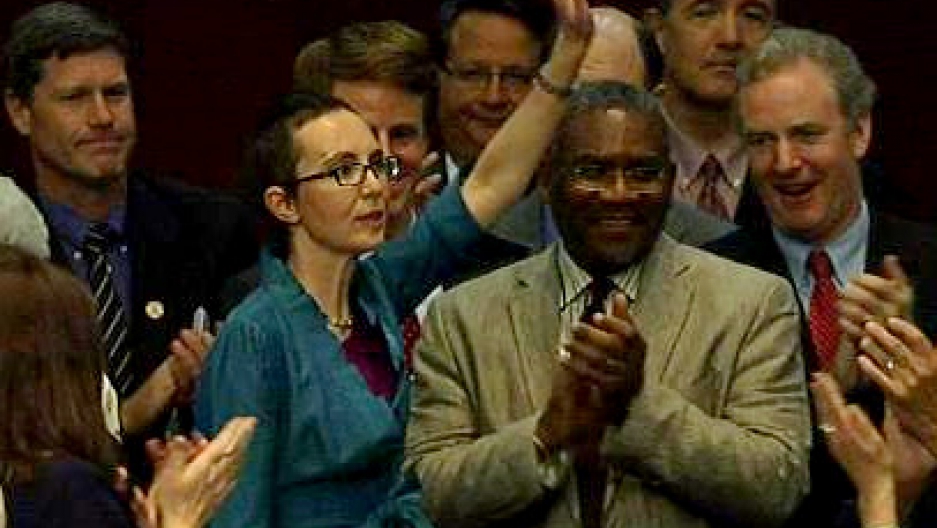 Gabrielle Giffords returns to the House of Representatives Aug. 1, 2011, for the first time since an attempted assassination Jan. 8, 2011. On Sunday, Giffords joined the Tucson community to remember the attack.

U.S. Rep. Gabby Giffords met her constituents and fellow victims in Tucson on Sunday, the one-year anniversary of the deadly shooting that cost six lives and injured 13 others, including Giffords.

Giffords, making her first real public appearance in her district since the attack that she has no memory of, led the crowd in the  pledge of allegiance. Giffords has been undergoing rehab since Jared Loughner launched his attack in the parking lot of a local Safeway.

Buzz Conover, senior political reporter at KUAT, said everyone knew what to expect from Giffords, having seen her do some TV interviews around the Christmas holiday.

"She did pretty well. She was able to walk across the stage; she got a little bit of help from her husband and some of her aids," he said. "When she gave the pledge she had to lift her right arm up and hold it there with her left arm. But she did pretty well. Her voice was a little quiet, but you could definitely hear her."

Conover said Giffords sat on the stage throughout the event and looked to be having a pretty good time at times. Whether Giffords will run for re-election remains to be seen, but Conover said her supporters have made sure if she decides to run, she'll have the campaign funds to do so.

Conover said a decision is expected in the next few weeks.

Most people agree that Tucson has changed irreversibly, Conover said, words said by Tucson Mayor Jonathan Rothschild at the memorial.

"People are very, very aware of it," Conover said. "We hear a lot of foundations being started up to deal with more civility. I don't know if that will translate nationally, but certainly locally people are aware of it."

If any good comes of this, it's a greater appreciation for the need to support mental health treatment. As a direct result of this shooting, Conover said, about 600 people have taken a course in mental health first aid — "the CPR for mental health, to help people in crisis."

A memorial has been erected by Safeway in the parking lot of their store where the shooting happened. Many in Tucson feel a personal connection to the attack, even if they don't have a friend or family member who was killed or injured.

"Everybody does really feel that it affected them personally," Conover said. "We talked to people last week coming into the anniversary who were moved a year ago to act — to go to the funerals — who had no connection to any of the victims. Didn't even live near the Safeway, but still were affected enough emotionally by the incident to go to the funerals, to leave cards and flowers and candles at memorials a year ago and now."