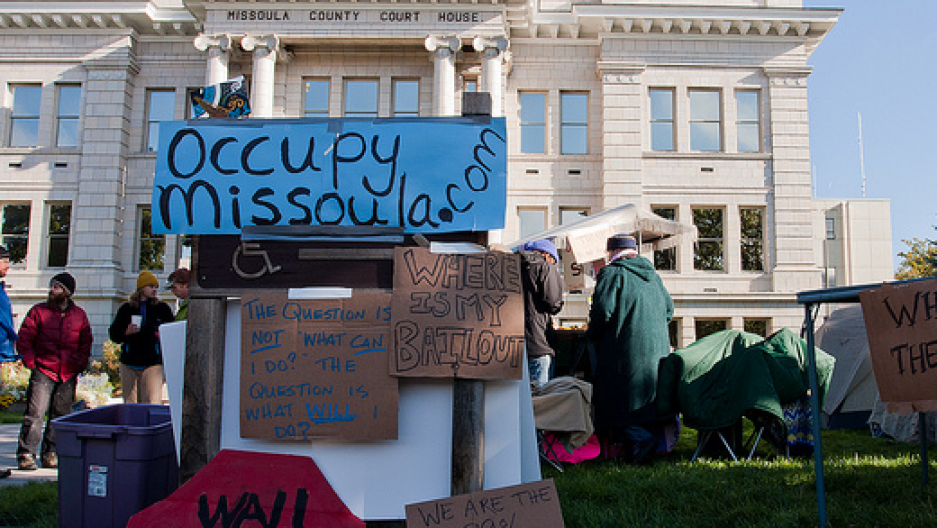 The Occupy Wall Street movement that started in Manhattan is now in its second month and has spread to hundreds of cities around the world and across the country– Mobile, Alabama; Jacksonville, Florida; Portland, Oregon; Grand Rapids, Michigan and Missoula, Montana, are just a few.

Protesters from across the country citie a range of reasons for their activism:

Protester Kim Bostrum, in Missoula, Montana: “I think the reason everyone is here is because we’re angry. I’m angry because I feel like a wealthy minority is controlling our so-called democracy. They control our food our water, they’re outsourcing our jobs and this wealthy minority is taking over the country and we want to take it back.”

Richard Ertle, demonstrator in Grand Rapids, Michigan: “I’m tired of my government calling me a consumer. I’m a citizen. I wasn’t born a United States consumer. I want my government to listen to me, not the businesses that are trying to manipulate me.”

Debbie, an unemployed protester in Missoula: “The chronic underemployment of a lot of my colleagues and friends is a big strain on a lot of people around me. Sexism still exists in the workplace, racism is everywhere. These issues aren’t being fully outed.”

Ryan Peter Gillikin, protester in Grand Rapids: “Corporate companies have the ability to give unlimited amounts of money to campaigns… so that they can get their desired officials… in place so that they are in power without having the responsibility.”