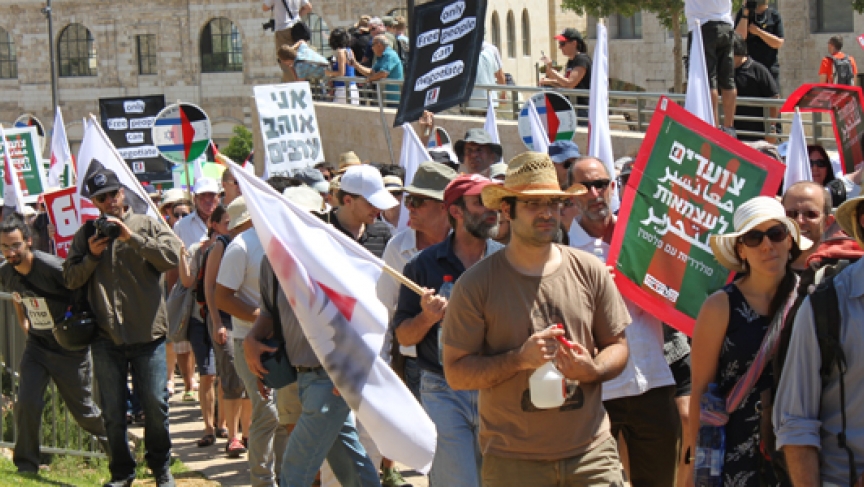 Share
Israel's parliament can be a lively place. But debate in the Knesset this week was particularly intense. Lawmakers engaged in a ferocious argument about a proposal to investigate non-governmental organizations alleged to be "anti-Israel." In the end, the bill was voted down by a large margin. The bill was introduced by the hard-line Yisrael Beiteinu party. Supporters said it would prevent Israeli non-governmental groups from de-legitimizing the Jewish state. But opposition leaders saw it as nothing more than a political witch-hunt. Hagai El-Ad is the executive director of the Association for Civil Rights in Israel, which would have been a potential target for a Knesset investigation if the bill had passed. "I take very little pride in the fact that the parliament voted against an initiative that is deeply anti-democratic and should not have been brought to a vote to begin with," El-Ad said. He added that Israel's governing coalition is putting the country's democratic foundation under threat with a series of legislative initiatives. Every Friday afternoon for nearly two years, Israeli peace activists have marched in East Jerusalem. Demonstrators usually focus their ire on Jewish settlers moving into Arab neighborhoods. Last week though, the theme of the march was broader. They're chanted against the Israeli occupation and for the creation of an independent Palestinian state. The demonstration was also much bigger than usual, with several thousand protestors. That was thanks in part to a new law that just passed in the Knesset. The law makes it illegal to voice support for a boycott of goods or services from Israel or from any of the Jewish settlements in the West Bank. Ada Ravon came to the weekly demonstration from Tel Aviv for the first time. She said the right-wing politicians who sponsored the anti-boycott legislation had crossed a line by limiting free speech. "It's one step further into dictatorship," she said. They might not all use the same stark language, but many Israelis — along with a number of American Jewish organizations — have condemned the anti-boycott law as undemocratic. Hebrew University political scientist Yaron Ezrahi said the new law is part of a destructive trend that is tarnishing Israel's image abroad. Ezrahi blames the man in charge of the current government, Prime Minister Benjamin Netanyahu. "People have begun to realize, people who thought maybe it's just political gimmick, maybe it's just another wave that will pass, (and they) have begun to actually worry about the possibility that this right-wing bloc under Netanyahu is trying to institutionalize its own ideology into the Israeli legal and constitutional system." Ezrahi is predicting a backlash from the Israeli left, which has been politically sidelined for years. But political analyst Yossi Klein Halevi of the Shalom Hartman Institute has his doubts. First of all, Halevi said the anti-boycott law isn't going to galvanize the left because the law itself is doomed. "We have a very powerful supreme court and in the end this law is not going to stand," Halevi said. "It will justifiably be thrown out of court. I see this as grandstanding on the part of certain parliamentarians." Halevi said he agrees with lawmakers who claim that some "far left" organizations who support boycotting Israel pose a threat to the Jewish state. But he called the anti-boycott law, along with the failed attempt to set up investigative committees targeting the funding sources of left-wing NGOs, "stupidity." Halevi added, however, that the moderate Israeli left has another problem. Its view of the conflict with the Palestinians, he said, is seen by Israeli centrists as only half-right. "Where the [Israeli] mainstream is today," Halevei said. "On the one hand, [it is] passionately in favor of a two-state solution." "On the other hand," he said moderate Israeli voters are, "equally passionately convinced that it would be a mortal threat to Israel's survival to prematurely create a Palestinian state." Israelis are skeptical about the willingness of the Palestinians to recognize the legitimacy of the Jewish state. So, if the Israeli left is really going to rise again, Halev said it will have to make the case that things have changed in Palestinian politics.