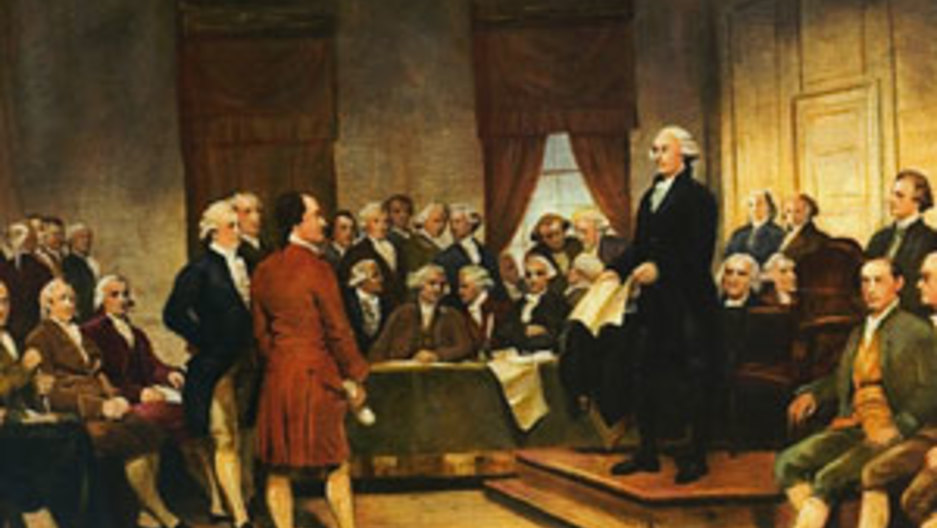 Image of the 1787 Constitutional Convention.

A textbook distributed to fourth graders in Virginia says that thousands of African Americans served in the Confederate Army, including two black battalions under the command of Stonewall Jackson. That's categorically untrue. In Delaware, Senate candidate Christine O'Donnell recently acted incredulously when it was suggested that the separation of church and state was enshrined in the First Amendment.

"There are no national standards for history in America," Kenneth Davis, popular historian and best-selling author of Don't Know Much About History, told PRI's The Takeaway. "They're trying to come up with some," but haven't created any yet. The lack of standards means that states often decide what students should know, leaving different rules throughout the country.

"We've had this problem for a long time," Davis points out. "It's a serious problem, but it's one that has to do with the way we teach history and talk about it. It's more about myth and popular memory than real history."

The history of African Americans in the United States, for example, is often neglected by history teachers throughout the country, takeaway contributor Patrik Henry Bass points out. "You can go to black newspapers to get an incredible account of black life in the early part of the 19th century," Bass says. Unfortunately, many historians neglect to do just that.

When asked what every American should know about history, Mark Oglesby, a high school civics and government teacher in Michigan, came up with an event, a person, a song, a law and an idea. His list was this:

All are important, according to Oglesby. But "to be good citizens," he says that students "need to think critically of the government. They need to know what the principles of government are, what the powers of government are, if government's doing something do they have the right to do it. If not, what steps can we take using our first amendment rights, using our rights to take things to court, even practicing civil disobedience." And that's a lesson that most people should take to heart.

"The Takeaway" is a national morning news program, delivering the news and analysis you need to catch up, start your day, and prepare for what's ahead. The show is a co-production of WNYC and PRI, in editorial collaboration with the BBC, The New York Times Radio, and WGBH. More at thetakeaway.org.