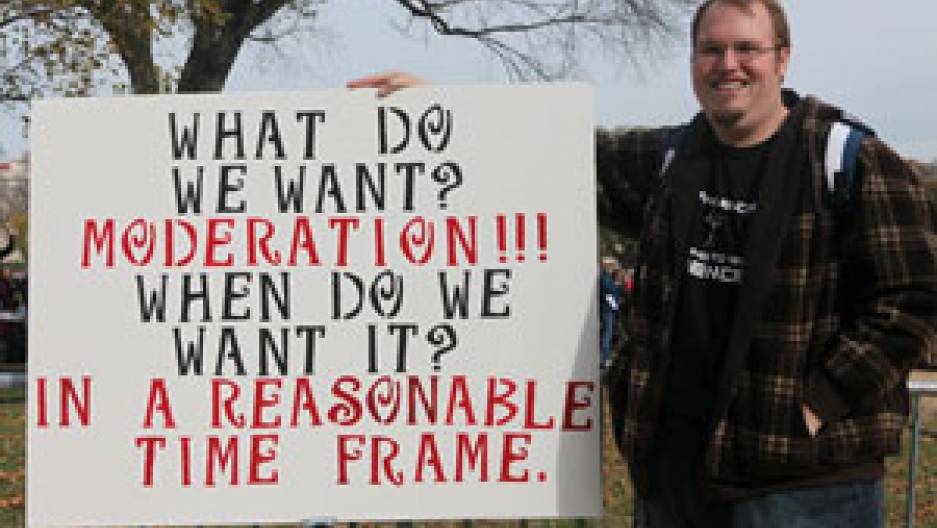 Photo of a sign from the "Rally to Restore Sanity and/or Fear" (Image by Mythili Rao).

By Celeste Headlee: The Takeaway

For more, listen to the audio.

What struck me most about Jon Stewart and Stephen Colbert's "Rally to Restore Sanity and/or Fear"? The attendees were not the people that Washington thinks they are. Yes, there were plenty of college students, pot smokers, and 20-somethings who rarely vote. But of the 20 people whom I spoke to as they passed by me on the National Mall, not one of them fit that description. In fact, only two were younger than 40.

Many politicians (on both sides of the aisle) are comfortable dismissing the Daily Show and Colbert crowd as not serious, and non-voting. I think that's a mistake. The majority of the people I saw were middle-aged or retired, politically active, and fed up with politics.

For a career politician, what makes them dangerous is that many have reached the end of their patience and seem ready to hold people accountable for voting records and their platforms, without being swayed by ads. That's balanced, though, with the fact that they all have different priorities. I asked every person I spoke to the same question: "What should be the first priority of Congress?" I got different answers from almost everyone. Two people said jobs, but one said she didn't think Congress could really do anything about unemployment. So this so-called "middle" group -- the "sane and reasonable" center -- are issues voters who are frequently split on the issues. They likely won't vote as a bloc, which means they can't be courted as easily as the extreme right or left.

I talked to people who had driven down from Pennsylvania, flown in from Colorado and taken buses from New York. I even talked to a woman in her 50s who had bought a round-trip ticket from Honolulu the day after Jon Stewart announced his rally. Were they all Democrats? No. Were they all minorities? Absolutely not. Were they all middle class? Nope. And were they there to see a comedian? Not really. These people drove, flew, and rode from all points of the country because they wanted to be part of a historic moment, and they wanted to send a message to their elected representatitves. It would be smart for Capitol Hill to pay attention, and stop thinking that the sanity movement is at heart a big group of kids that like jokes.

That only applies to that group of college students that were sitting on the porta-potties.

(below, a slideshow of signs from the Rally, as shot by Takeaway associate producer, Mythili Rao.)