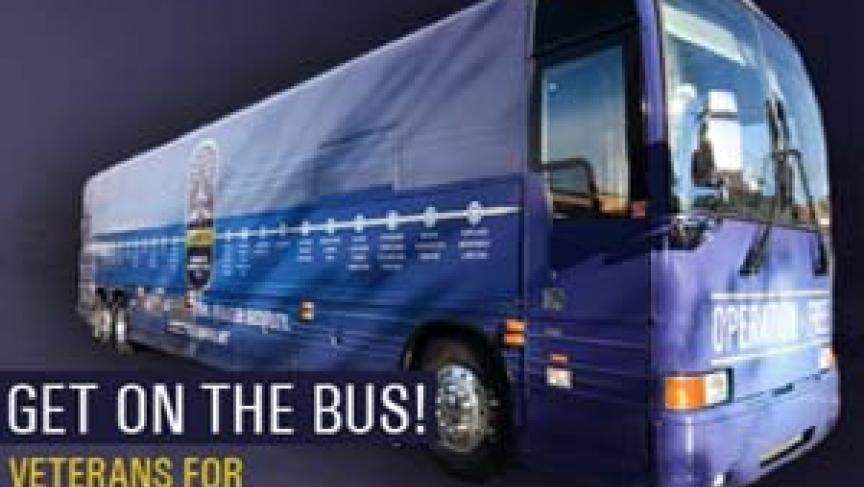 A group of military veterans -- some from Iraq -- is barnstorming American by bus. The message they're trying to get out: American’s dependence on foreign oil entangles the US military in battles with hostile regimes. The veterans want the US to start running on clean energy.  Their main funder is a non-profit group called the Truman National Security Project.

"I’m on this bus because I love soldiers and I love my country," said Army veteran Larry Delashmit. "And becoming energy fee secures both. And the thought of some soldier dying ... for me to have a cheap gallon of gas ... is unacceptable."

Delashmit, who hails from Fayetteville, Arkansas, served in Vietnam.

The bus trip began in Washington DC in January. Since the, it’s weaved its way through small towns and big cities from DC to Arizona, up to Oregon, across the Dakotas and now the Midwest. The passengers rotate -- vets hop on for a few days, then they hop off.  All told, about 35 veterans have ridden the bus, which itself is a huge mobile billboard. The side reads "More jobs, less pollution, greater security."

Delashmit says their message has largely been well received. "I’ve seen a lot of people just put their thumbs up and kind of looking at them, I kind of think they’re other veterans."

But fellow traveler Iraq vet Chris Miller from Carbondale, Ohio, says not everybody has been so kind.

"There’s certain places, you know where I’m from and where Larry is from, being from Arkansas and even here in Wisconsin, there’s certain parts where as soon as you say words like climate change or green energy, everybody immediately thinks 'oh, that’s extreme left wing,' and we’ve been called an extreme left wing group. People have said things such as you’re veterans dishonoring your service, these sorts of things. You’re being un-American."

On the other hand, the vets say their message has penetrated into areas where environmentalists aren’t always trusted.

Iraq veteran Robin Eckstein from Appleton, Wisconsin says people will listen because this clean energy push is coming from them.

"That this voice is not just from dirty hippies and people talking about polar bears. It’s coming from veterans who are concerned about their fellow troops being shot and killed, and the future of this country."

In Madison the vets took their message inside the Wisconsin State Capital where they held a press conference.

Here’s Larry Delashmit: "Every time there is a $5 increase in a barrel of oil, some guy in the Middle East named Ahmadinejad -- I think that we’ve all heard that name -- gets an extra 8 billion dollars that year in income. None of this makes sense when there is a viable alternative to this."

Robin  Eckstein added that their message isn’t just about national security. "It’s also climate change. And that as long as the military is the 9-1-1 for the world, we are going to be going into situations where flooding, drought and famine have destabilized these areas. This is something that the Pentagon knows. The Pentagon just recently came out with their quadrennial report which stated climate change as a destabilizing factor. So when the Pentagon and the DoD are saying this is important, I listen."

The veterans support a bipartisan national climate and energy bill being written by US Senators John Kerry, Joe Lieberman and Lindsey Graham. They’re also supporting various bills at the state level, which is why they stopped at the capital in Madison. President Obama has publicly acknowledged the group, but some days getting traction is tough.

In Madison, only two state Senators and a handful of environmentalists showed up for the vets’ press conference.

Chris Miller, who earned a purple heart in Iraq expressed his frustration at the small turnout. "We’re in here talking about ongoing conflicts in which people from Wisconsin or everywhere in this country are fighting over there. The fact that we can’t get more people to show up and pay attention to this issue, I think is a little bit disturbing."

Back on the bus there was more disappointing news of a different sort: The bus was behind schedule for its next stop in Indiana.

The driver stopped for Arby’s and subway sandwiches along the road -- the usual lunch fare on the bus. For those wondering about the irony of people driving around the country to promote using less petroleum, the bus can run on biodiesel, and the organizers are purchasing carbon offsets to minimize their pollution.