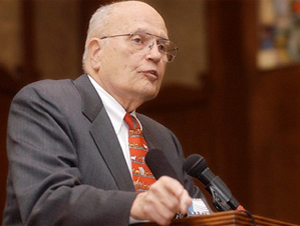 REP. STEVE KING (R-IA) "That outburst was about adjournment. The Democrats forced a vote to adjourn and we haven’t done anything about energy prices."

REP. PETER WELCH (D-VT): "This has really been a lot of political posturing in my view, because the Republicans are using the drilling argument to try to avoid the broader debate about how we get from here to there in a new energy policy."

A cluster of Republicans later returned to the House floor and, with no lights and no sound system, went ahead and gave speeches. The fact that it couldn’t be recorded or broadcast, well, that was part of the point.

Somehow this week the House did find time to pass a bill that gives the FDA authority to regulate tobacco. Congress has been kicking around legislation like this for 15 years. So passing that bill lit up one heck of a dramatic exchange. Beginning with House Minority Leader John Boehner:

At which point, the irrepressible John Dingell of Michigan reared up as only a 27-terms Congressman who walks with two canes can.

JOHN DINGELL (D-MI) "Madame Speaker I yield myself 15 seconds for the purpose of responding to my beloved friend, the minority leader. This legislation is on the floor because people are killing themselves smoking these evil cigarettes and the distinguished gentleman is going to be among the next to die! I am trying to save him as the rest of us are, because he is committing suicide every time he puffs on one of those things!"
["Would the gentleman yield?"]

Clerk: "The gentleman’s time is expired."

Lest we forget: there’s still fire in that Capitol Hill.

Speaking of getting all hot and bothered:

It isn’t exactly the Maxim Hot 100 or People’s Sexiest Man Alive. But this week, The Hill newspaper published its annual 50 Most Beautiful list. The men? Washington likes ‘em tall, dork and handsome. But Beltway Babes outnumber the boys: 29 to 21. The list includes one cop, a couple of lawmakers’ daughters and five Congress members. Apparently scandal hasn’t scarred the looks of New York Republican Vito Fossella. No. 4 is the wife of one Ohio Congressman and erstwhile presidential candidate. Which gives Elizabeth Kucinich license to suggest a different sort of campaign is in order.

ELIZABETH KUCINICH: “I’m going to work on him to get on the list next time – I’ve got some fantastic pictures of Dennis. I think he should be number one next year, definitely.”

Congress is taking the next five weeks off, but CNC’s Jodi Breisler has a look at what some of the lawmakers will be up to:

Most of them are off and running for re-election. We’ll check in for some of the tightest and most interesting races. Meanwhile other politicians are flocking to Washington - like Newt Gingrich and Minnesota Governor Tim Pawlenty. They’ll be in town to raise money and get with Capitol Hill reporters who have some extra time on their hands.