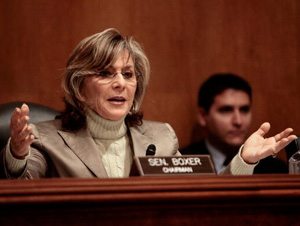 Environment Committee chairman Barbara Boxer has been going hard at the Bush Administration for gutting scientific decision making at the EPA.

Aides say Boxer has a strong suggestion today about EPA Administrator Stephen Johnson’s future employment at the agency. Capitol News Connection confirmed that Boxer is planning to call for his resignation.

And, after weeks of talking past each other on energy policy and oil prices, Democrats and Republicans in the Senate are showing a little give. Republican Leader Sen. Mitch McConnell.

MCCONNELL: "We might well be on the verge here of getting an agreement that would be acceptable to both sides and give us a chance to go forward."

That may not sound like much, but it’s probably the most positive thing he’s had to say about Democrats on the energy issue in a month.

Don’t forget though: the two sides aren’t really debating energy -- they’re still deciding HOW to debate energy policy. Democrats have an offer on the table giving each side four amendments, on drilling or anything else they want. Today McConnell takes the pulse of his Republican rank and file to see what they think.

Olympic fever is building in Beijing. Today the Chinese unveil their new building in Washington. CNC's Yanmei Xie reports from the new embassy of the People’s Republic -- it opens today.

While the Beijing Olympics will testify to China's soaring clout in the world, this gleaming embassy is China's statement that it's now a colossal presence in Washington

Now amid the celebrations, one lawmaker is getting ready to rain on China’s parade.

Kansas Sen. Sam Brownback steps to the podium to expose what he says is hard evidence that China’s been ordering big American hotel chains to monitor the Internet activity of guests staying near Olympic venues.