Just days before the US election, Yaneilys “Pink” Ayuso, who is from Miami, Florida, is still undecided but seeks a candidate who will address police and prison reform — two issues that hit close to home.

“The moment that we are in right now is frightening,” said Ayuso, who uses the pronouns they/their/them.

In early June, following the death of George Floyd, protests against police brutality erupted in the city of Miami, and Ayuso was on the front lines with their friends.

“I’ve been to protests before but I have never been so overwhelmed in my life by police presence and militarization. ...Just seeing people being hurt and not the one inciting violence — that will forever stay with me.”

“I’ve been to protests before but I have never been so overwhelmed in my life by police presence and militarization,” Ayuso said in a voice message to The World. “Just seeing people being hurt and not the one inciting violence — that will forever stay with me.”

Prison reform is an issue Ayuso knows personally. Their dad is formerly incarcerated and was in prison for part of Ayuso’s childhood. Pink now identifies as a prison abolitionist, which means they want prisons and the prison system eliminated and replaced with restorative rehabilitation practices that are not punitive.

Juani Fernandez, 38, Ayuso’s Cuban American mother, explains: “My husband's incarceration has really opened my eyes to how the justice system has fallen short. ... It was definitely a hard time for me, but I had no choice.” 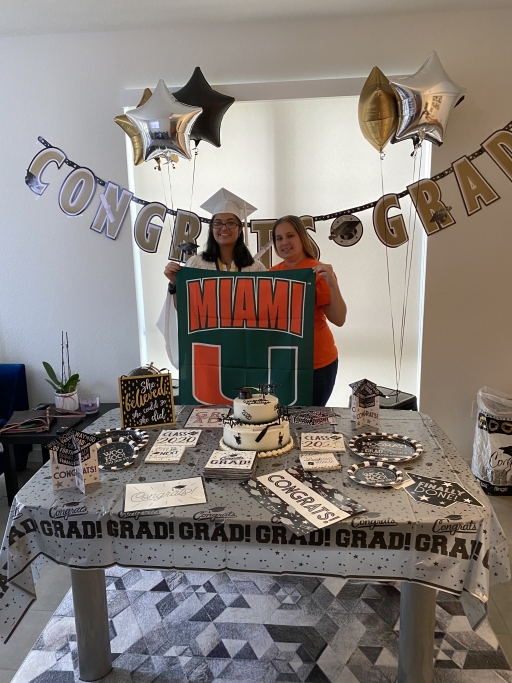 After graduation, Yaneilys “Pink” Ayuso decided to attend Miami University's online classes in order to stay close to home during the pandemic.

For Ayuso’s family, the struggle has intensified since the coronavirus pandemic started. Both of their parents have found it difficult to keep a steady job. Ayuso moved houses with their family. They also decided to take online anthropology courses at the University of Miami, a predominantly white, private university that they hadn’t considered before the pandemic — in order to stay close to her family.

“In the system that we are living in, too many people are working for the benefit of a few,” said Ayuso, whose family comes from Puerto Rico and Cuba.

Earlier this year, Ayuso was excited to vote for Sen. Bernie Sanders before he dropped out of the race. But even he didn’t speak directly to Ayuso’s pressing issue: getting rid of the prison system.

Neither do the main presidential candidates, incumbent Donald Trump or Democrat Joe Biden.

“Biden and Harris have probably gotten more people into jail than most Democrats people know. I mean they do not call Harris ‘top cop of California’ for no reason. And Biden wrote the ‘94 crime bill which is the reason that so many of my friends’ fathers were in prison when we were in elementary school,” Ayuso said.

A couple of days from Election Day, Ayuso can’t decide if they will even vote.

“We’ve had a lot of conversations over Biden and what it would mean to endorse that ticket and give the Democratic Party another vote even though they so adamantly oppose the left and leftist policies,” said 18-year-old Thais Maradiaga, Ayuso’s best friend who is Nicaraguan American.

Related: Young US Latinos are at the forefront of a climate revolution 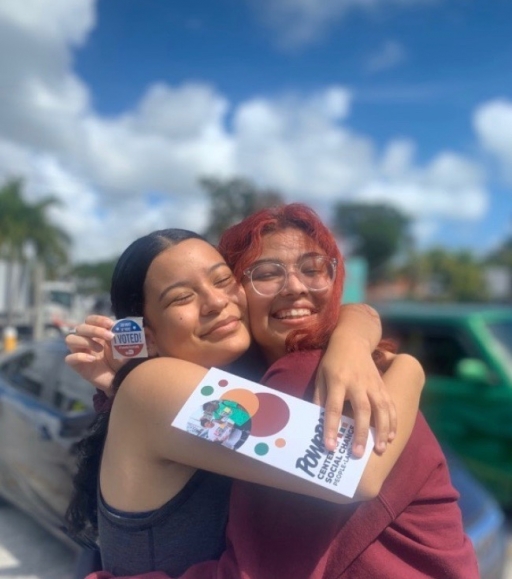 Maradiaga is also an undecided first-time voter. Ayuso and Maradiaga met in high school and bonded while taking a multicultural studies class during their junior year of high school.

Now they’re both members of the Miami-based social justice group, Power U. Maradiaga calls Ayuso the political leader in their group of friends.

“At the cusp of all of my political awakenings and realizations they [Ayuso] have always been there or have been one step ahead of me and have waited for me to catch up, so I think that is really special about our friendship,” Maradiaga said.

‘I’m probably the only communist in my family’

Florida is a battleground state with about 3.1 million eligible Latino voters, which adds pressure on Ayuso to vote.

“Too many people have to starve, have to be homeless, have to struggle to just get by, have to survive, have to live paycheck to paycheck for the 1% to thrive,” Ayuso said.

Ayuso doesn’t believe in electoral politics and instead looks to communism as a possible solution.

“I am probably the only communist in my family. But here’s the thing, my Cuban family came here for a better life to escape whatever they said they were facing on the island to still struggle here."

“I am probably the only communist in my family. But here’s the thing, my Cuban family came here for a better life to escape whatever they said they were facing on the island to still struggle here,” Ayuso said.

Ayuso’s family fled Cuba during Fidel Castro’s communist regime, so when Pink brings up communism to their mom, there's some tension.

“I don’t believe in the communist party,” Fernandez said. “I trust her stance in socialism. I’m not saying that I like it, but, you know, she has experience where she was treated unfairly or bad just because she didn’t have an iPhone or the latest pair of Jordans.”

Ayuso dreams of equality, a nation where resources are shared and distributed equally to all people. They say communism is the answer. But none of the current presidential candidates fit with Ayuso’s beliefs.

“I know that many leftists will be voting for Biden and have made that public knowledge. That is still something I am struggling to decide on because, in good conscience, I can’t vote for him,” Ayuso said. “But I know that despite everything I don’t want to see Trump in office for the next four years.”