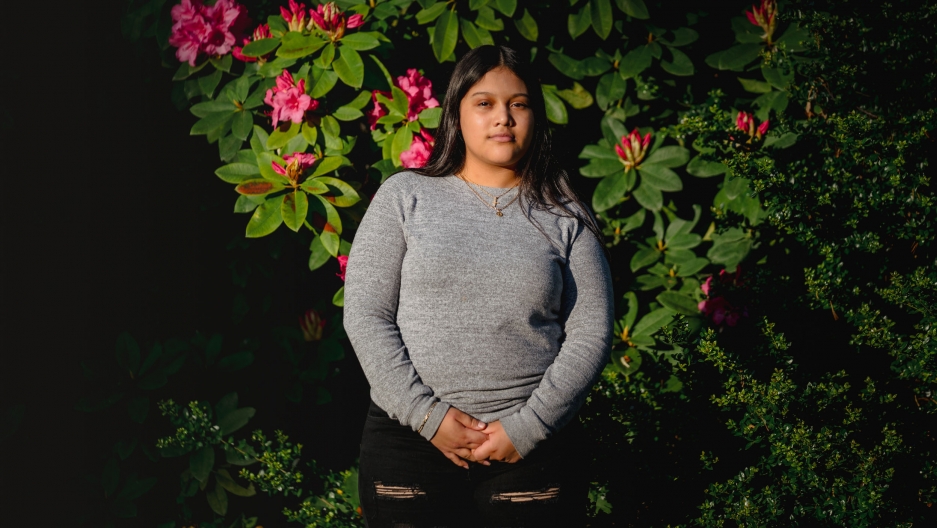 Michelle Aguilar Ramirez stands for a portrait in South Seattle, Washington, May 18, 2020.

Michelle Aguilar Ramirez remembers when she first heard about climate change. It was in her eighth-grade science class with her teacher, Mr. Flanders, in South Seattle.

“Someone brought up heat waves, and then they brought up the California fires. It became a whole debate within the classroom,” she recalled. “Some people are saying it exists, others that it didn't exist. Others like me were like, ‘Huh, what’s that?’”

Aguilar Ramirez started researching the science and what she could do to reduce her carbon footprint. As a 17-year-old who will turn 18 this month, it’s galvanized the way she thinks, the way she lives — and soon, how she’ll vote in November.

She started by eating less meat. She then got her mom and family to use less plastic by reusing their glass and plastic containers.

“My mom is always complaining that I have all these jars and that I don't know what I’m doing with them, but then, later on, I see her with one of my jars, holding her salsa,” she said, holding up another jar that once held pasta sauce but now contains her makeup brushes.

More than half of Generation Z, or people in their teens through early 20s, believes climate change is tied to human activity. That is true even among Gen Z Republicans.

Aguilar Ramirez’s emphasis on climate change is typical of her generation. More than half of Generation Z, or people in their teens through early 20s, believes climate change is tied to human activity, according to a 2018 study from the Pew Research Center. That is true even among Gen Z Republicans.

Millennials think that way, too, but the percentage drops off in older generations — with Generation X (the generation following the baby-boom generation), Baby Boomers and the Silent Generation (born before the Boomers) more likely to say climate change is due to natural patterns or that there is no evidence the Earth is getting warmer.

In a separate report, Pew shows Hispanic people overall are also more likely to say climate change is tied to human activity, more so than their white or Black counterparts.

These trends, coupled with the fact that one in four Gen Zers is Hispanic, set up young Latinos to be a key demographic leading the charge on climate activism — politically and at home.

“They start showing their parents how to recycle, so what we started seeing is a knowledge base that they're starting to teach and engage the parents,” said Micaela Razo, an organizer for the Latino Community Fund of Washington State. She works to engage Latinos on environmental justice issues in Yakima, Washington, where about half the population is Hispanic.

Last year, a group of organizations released the Washington Environmental Health Inequities map. It takes environmental hazards, overlays them with social inequities and then rates counties from one to ten. The higher the number, the higher the risk.

Aguilar Ramirez is a first-generation Guatemalan American living in South Seattle. Her neighborhood rates a nine. That’s because it’s home to a higher number of low-income people and it gets a lot of diesel emissions, along with several other factors that contribute to an overall greater environmental health risk.

Razo thinks this kind of information will motivate young people to get involved with climate activism — especially as they see how it impacts their parents and community.

“We do see a movement more now than we would before. I'm starting to see that more youth, more Latina women are being engaged and are saying, ‘This is really affecting us.’”

“We do see a movement more now than we would before,” she said. “I'm starting to see that more youth, more Latina women are being engaged and are saying, ‘This is really affecting us.’”

Ana Sanchez Medina, a Latinx 17-year-old from White Center, outside of Seattle, says she’s pushed her parents to talk more about climate change.

“It's kind of a thing because I make it a thing,” she said. While they’re politically progressive, she said, they don’t see the urgency as much as she does.

Sanchez Medina would like to see the presidential candidates take on something like the Green New Deal, a piece of legislation that failed to pass Congress last year but would have overhauled large parts of the United States’ economic and social structures to combat climate change.

Last year young and older people alike joined the global climate protest in what is considered the largest-ever worldwide climate action. Sanchez Medina remembers that demonstration — she was on the streets in Seattle.

“It’s really inspiring how events like that have been put on and supported by young people. It really speaks to how far people are willing to take the fight.”

Razo says that kind of involvement from youth is vital.

As the presidential election nears, first-time Latino voters like Aguilar Ramirez are looking for a candidate that will push policies to invest in clean energy or deal with rising oceans. Aguilar Ramirez has said she will vote for Democratic nominee Joe Biden, though she’s not particularly excited about him.

But in the meantime, she hopes more people will invest in climate action.

“I feel like the earth is this like trying to send signals in order for us to, like, make a change, and we keep neglecting it.”