In a widely circulated video from early this year, a Sudanese imam named Muhammed al-Amin Ismail delivers an emotional Friday sermon at a mosque in Khartoum.

Ismail, holding up a sixth-grade history textbook, turns to a page on the European Renaissance revealing a picture of Michelangelo’s “Creation of Adam” masterpiece.

“They justify the depiction of God in human form!” he decries and begins to sob loudly.

Islam is generally averse to idolizing God and religious figures as human beings.

“Close the school and cancel all the classes!” he declares and blasts Omar al-Garrai, then-director of Sudan’s National Centre for Curriculum and Educational Research. He's the government official whom he blames for the offensive content.

For decades under the dictatorship of Omar al-Bashir, Sudan’s school curriculum was infused with Islamic ideology. The new government that came to power in Sudan in 2019 following popular protests set out to change that.

Garrai was put in charge of that effort and sought to “de-Islamicize” the country's education system. Conservative Muslims have taken issue with some of the changes that Garrai implemented — and it has grown into an intense debate over the future of the country’s school curriculum.

The role of religion in education

While the majority of Sudanese are Muslim, not everyone agrees on how religion should factor into education.

“The Muslim Brotherhood, which are supporters of the overthrown regime … whenever they have a problem, they go to the mosques,” Garrai told The World from his office at the Al-Khatim Adlan Center For Enlightenment in Khartoum.

The Society of Muslim Brothers, better known as the Muslim Brotherhood, is a transnational Sunni Islamist organization that was founded in Egypt, with widespread influence in Sudan.

Garrai has been at political and ideological odds with conservative Islamists since his school days at the University of Khartoum.

As a follower of the Republican Brotherhood — a modernist, Islamic movement that espouses gender equality and social justice — he opposed efforts to Islamicize the country in the 1980s.

In 1985, the Republican Brotherhood’s leader Mahmoud Muhammad Taha was hanged for apostasy after opposing Islamic law.

In 1990, Garrai fled Sudan, eventually landing in the United States and going on to study education and curriculum development.

He returned to Sudan during the 2019 protests that eventually led to Bashir’s ouster, and was soon offered a job to reform Sudan’s school materials by Mohammed el-Amin el-Tom, Sudan’s minister of education from 2019 to 2020.

“We wanted a curriculum that would help liberate their minds, show them that there are others, other cultures, other perspectives.”

“We wanted a curriculum that would help liberate their minds, show them that there are others, other cultures, other perspectives,” Tom said.

In other words, a school system that reflected the values of the uprising: freedom and equality.

“But we don’t decide for them. We should not try to indoctrinate,” like the previous regime, he added.

Tom knew Garrai’s affiliation with the Republican Brotherhood would make him a target of more conservative Islamists.

Still, he said that Garrai was widely seen as the most qualified person to take on the herculean task of reforming an outdated education system that was infused with religiosity — and poised to become the latest ideological battleground over the country’s future.

For Garrai, the central goal became “to purify the curriculum from all negative Islamic ideas.” 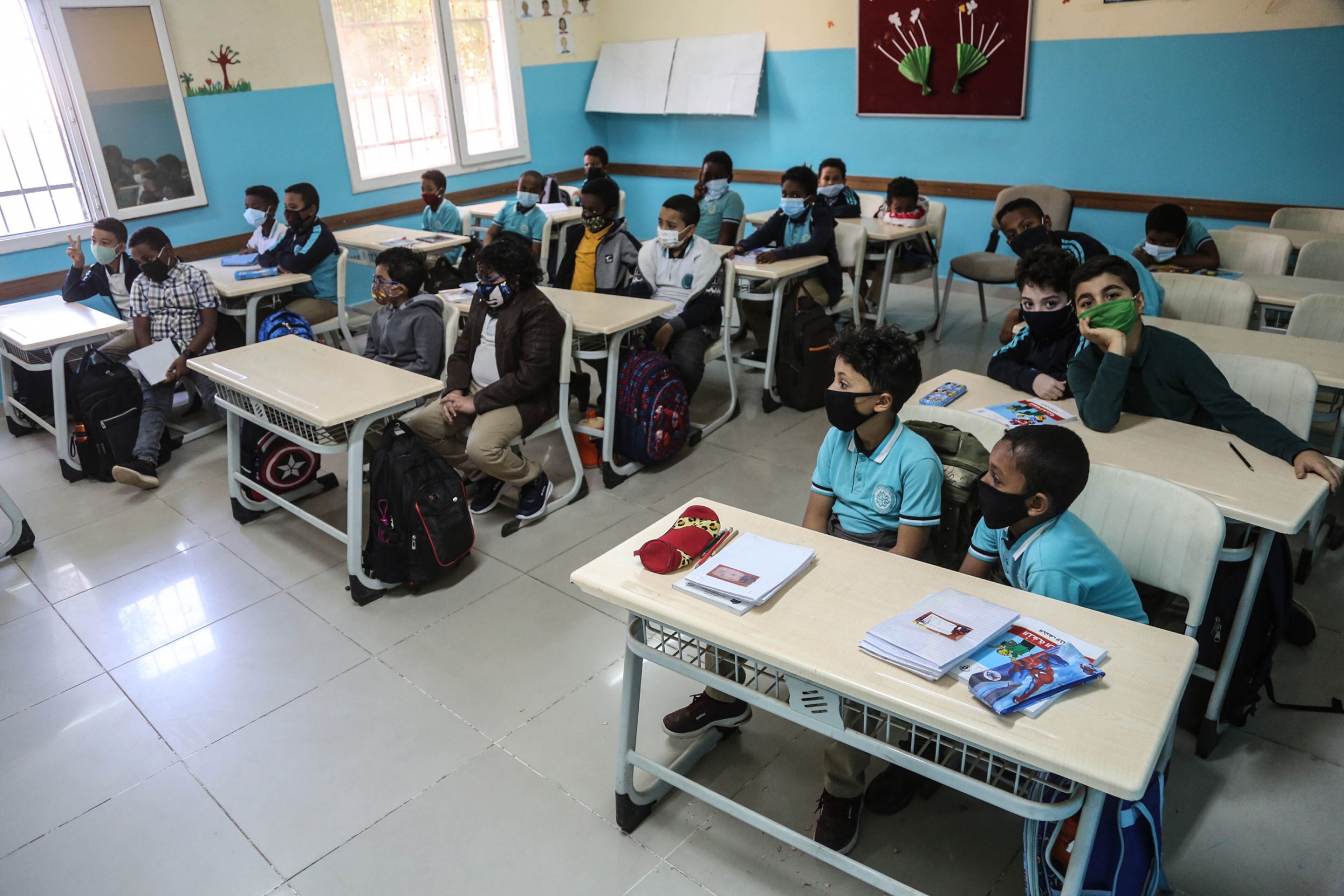 Students are seen at their classroom in Khartoum, Sudan, Feb. 1, 2021.

Subjects such as language, science and math, Garrai said, were filled with religious references that either counteracted learning or encouraged violent rhetoric.

That meant removing religious verses from school subjects other than religion.

For many non-Muslims, the obligation to memorize religious verses at school was a burden and yet another sign of exclusivity.

“That reduced my marks in education,” said Kazam Rahman Kabazi, a young Christian who runs the Kush Youth Organization, a skills-building nongovernmental organization in Khartoum.

Like many of the Christian youths with whom The World spoke, he supports Garrai’s efforts to de-Islamicize school lessons.

“I didn’t learn about my Christian religion at school.”

“I didn’t learn about my Christian religion at school,” he added, speaking from a small church in Omdurman.

After traveling across Sudan to meet with educators, Tom and Garrai created a 64-person committee to review the school textbooks from kindergarten through sixth grade.

But when the new curriculum was released in late 2020, the two men quickly faced criticism from all sides — not only from religious conservatives in line with Bashir’s regime but even from moderates who had supported the uprising against him. 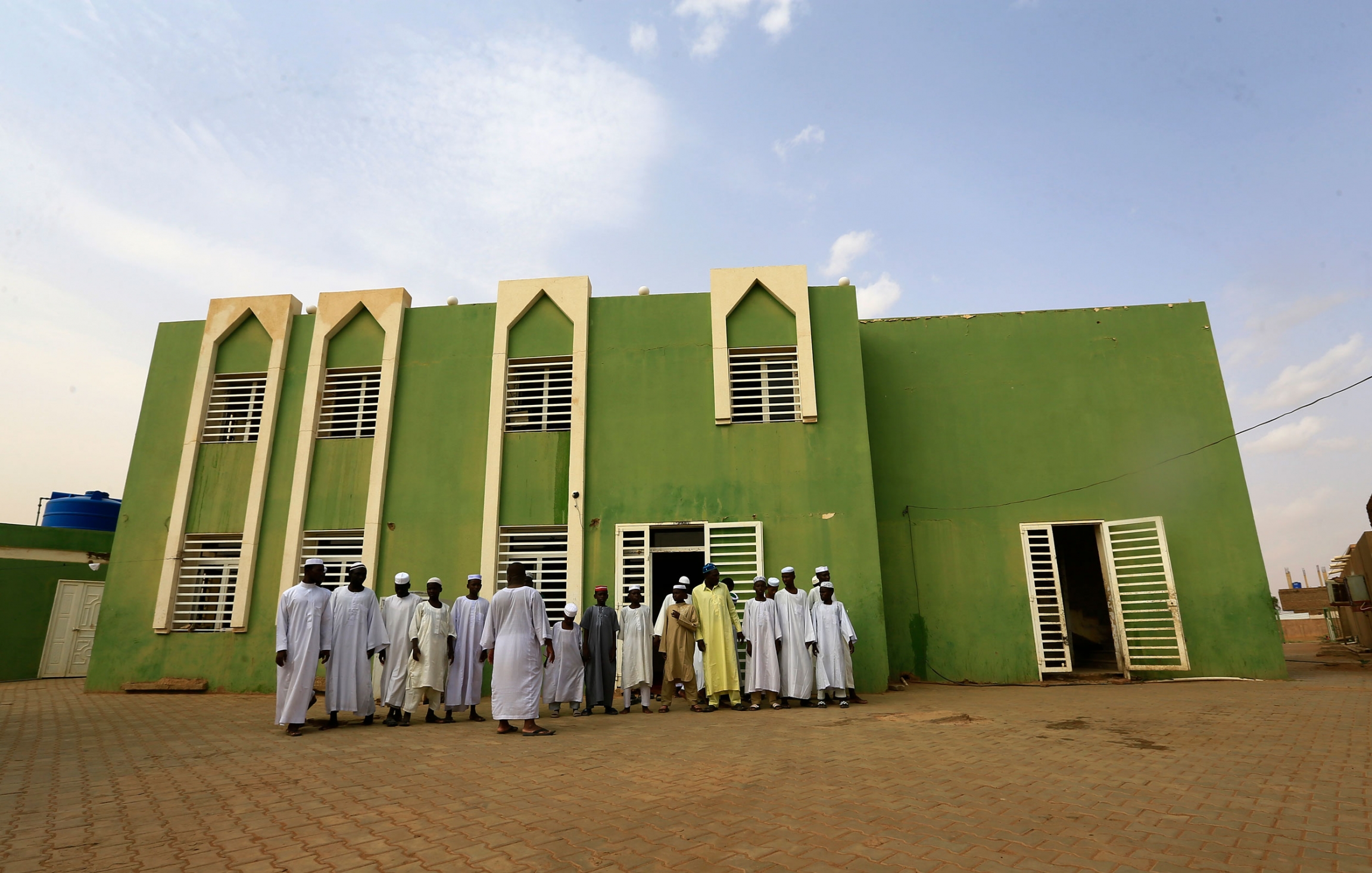 A group of young men stand outside of the Haj Yousif Mosque in Khartoum, Sudan.

At the sprawling Haj Yousif Mosque in Khartoum, worshippers young and old washed their feet before prayer.

School is out, but children of all ages have been sent here for their religious education.

Sheikh Abdelrahman Hassan Ahmed Hamid is the head of the mosque — and a leading Sufi Sheikh in Khartoum. Hamid says he was harassed and monitored by security officials for being critical of the Bashir regime.

“They wanted us to defuse people, to tell them not to go to the streets, and to tell people that disobeying your leader is haram [forbidden by Islamic law].”

“They wanted us to defuse people, to tell them not to go to the streets, and to tell people that disobeying your leader is haram [forbidden by Islamic law],” he said.

Sufi Sheikhs have a social duty to fight oppression, he added.

But Hamid took issue with some of the fast-paced social changes by the transitional government. 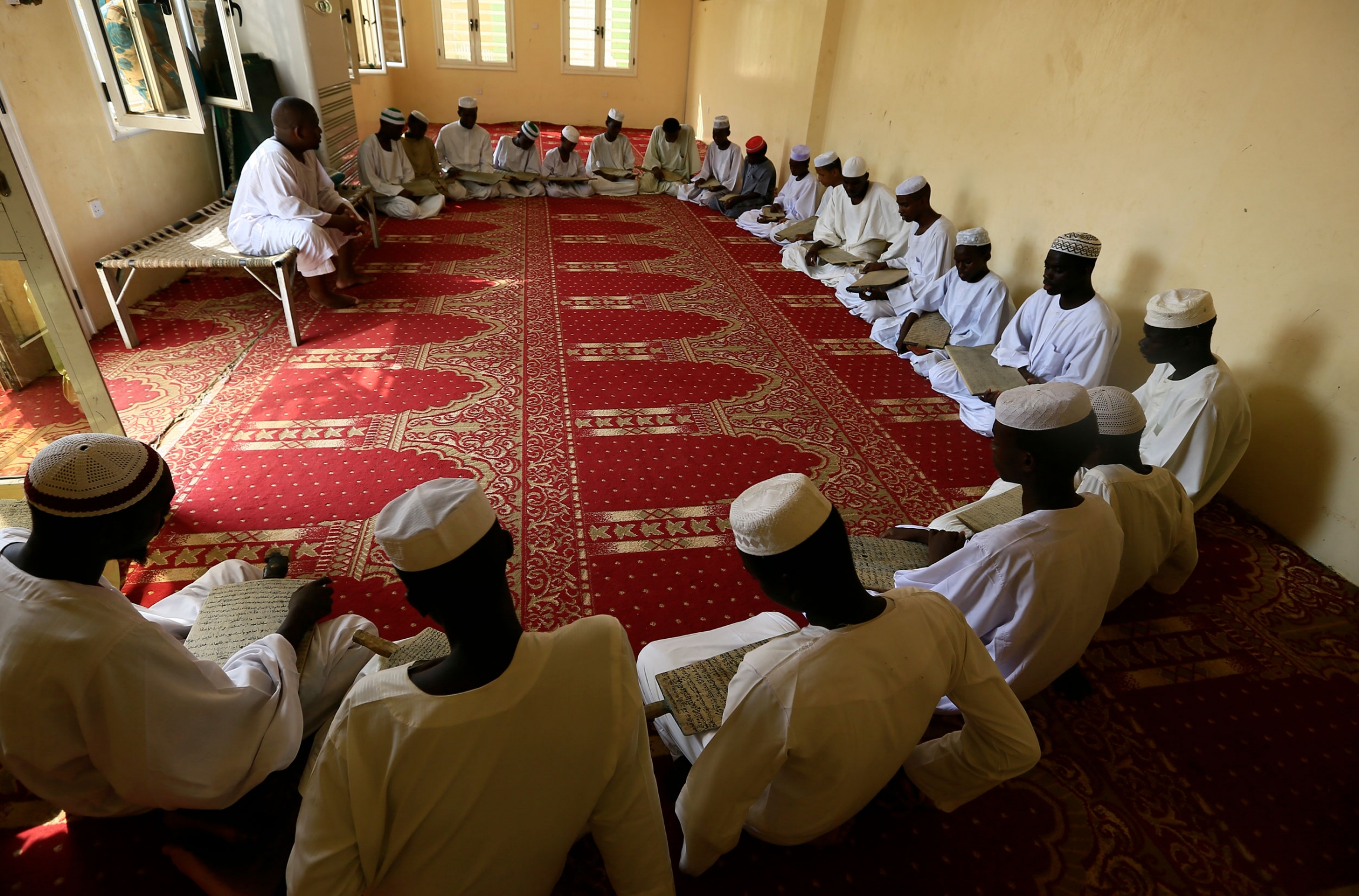 Earlier this year, he and other religious leaders went to Prime Minister Abdalla Hamdok’s office and called on him to fire Garrai.

Their grievances ranged from the inclusion of the “Creation of Adam” painting in the textbooks to controversial revisions to 19th-century Sudanese history to reducing the number of Quranic and Hadith verses that children were required to memorize.

“He can’t just mold kids’ brains from one person. This is the future of the kids.”

“He can’t just mold kids’ brains from one person,” Hamid said, referring to Garrai. “This is the future of the kids.”

Among regular Sudanese, opinions were mixed.

“There are a lot of good changes in the Garrai curriculum,” said Mohammed Hassan Mohammed, a pharmacist with three school-aged children who prayed at the mosque. “I agree with separating the Quranic studies from the sciences.”

But he said Garrai shouldn’t have touched the religion course itself. 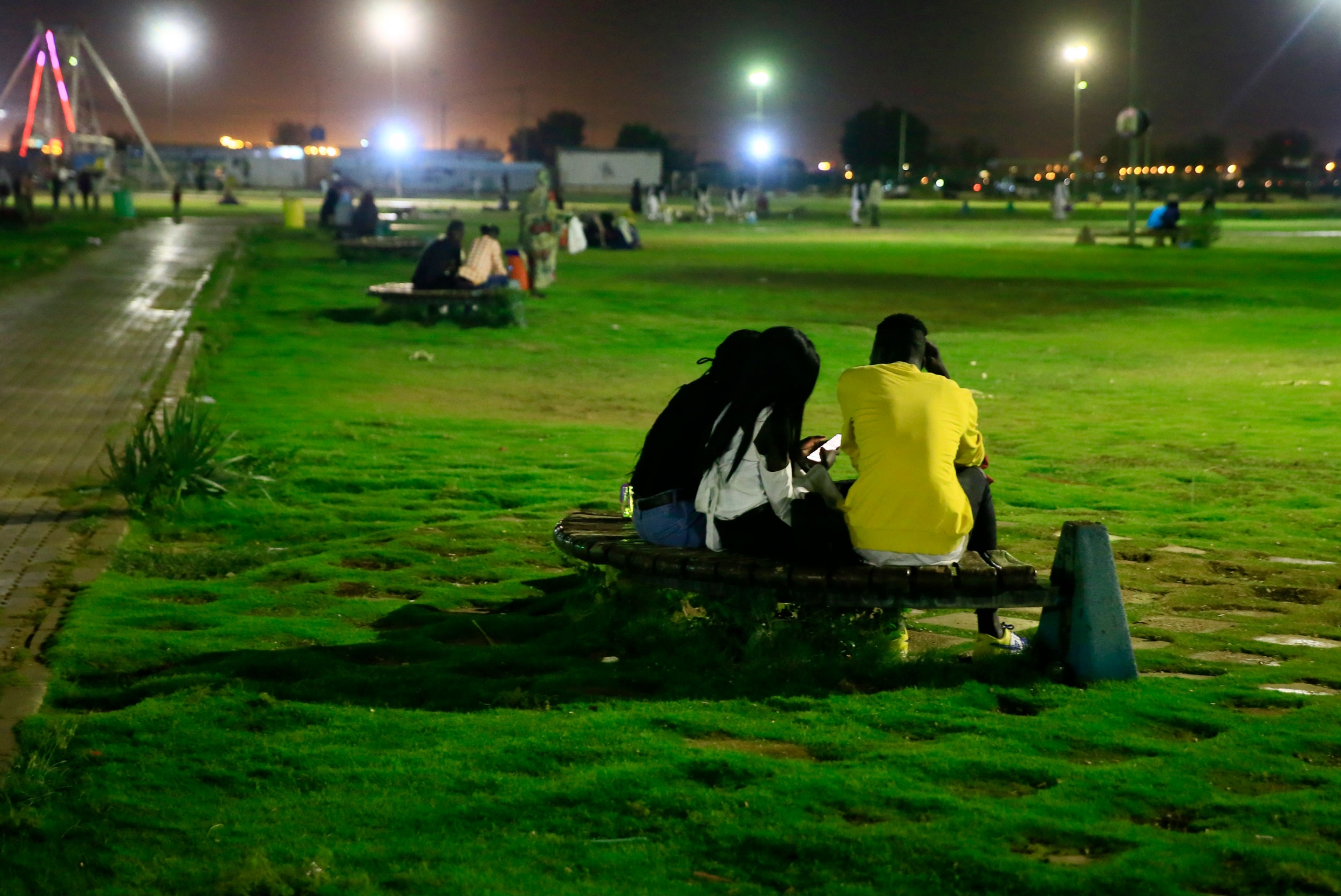 People sit on benches in Green Park at dusk in Khartoum, Sudan.

He sat on a bench with his friends in Green Park in Khartoum, a recreational ground full of families and youngsters.

“To learn about the European history is a good thing,” Abrahim began. “But it’s bad to bring controversial things to kids.” 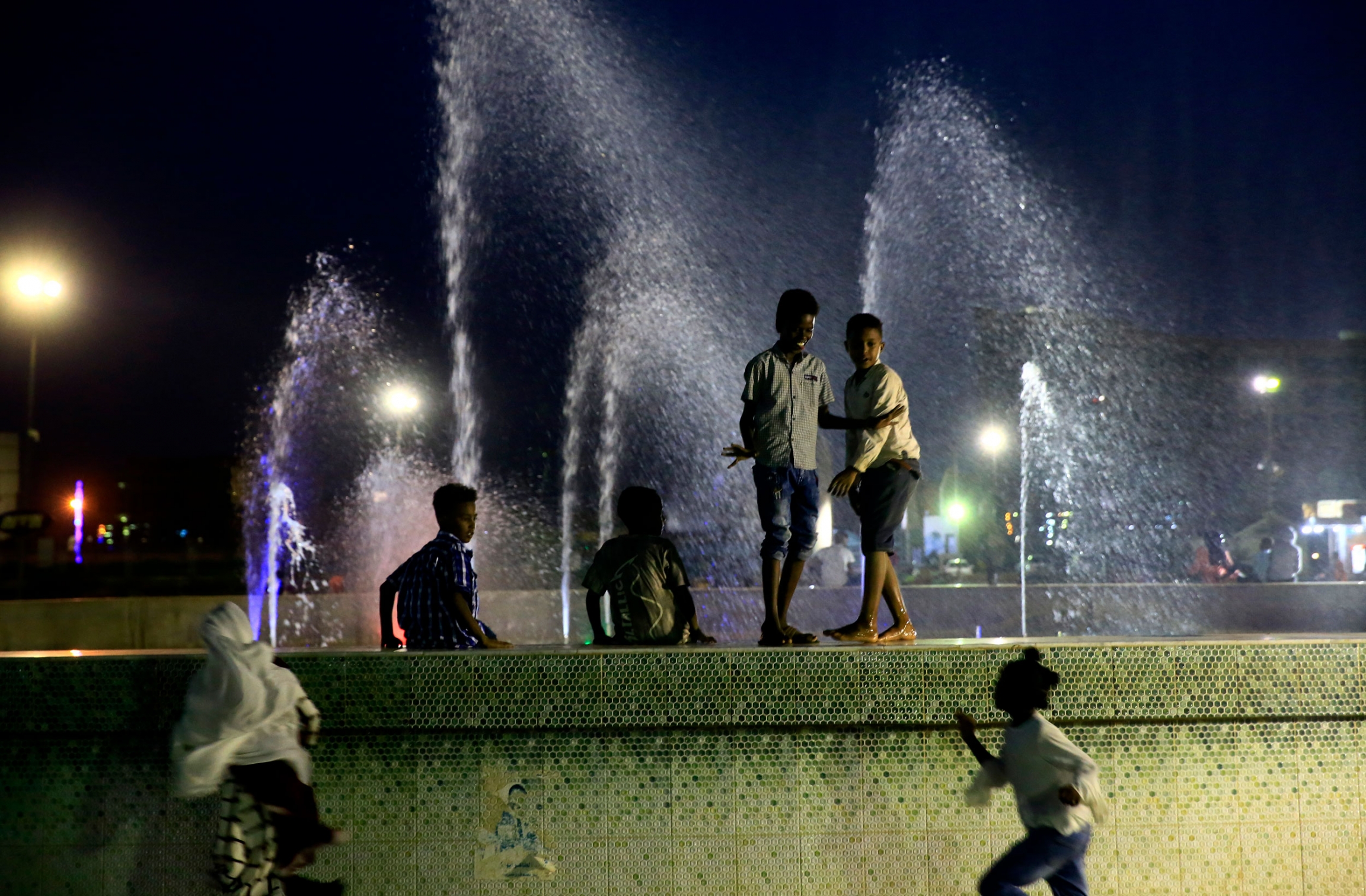 Children play near a water fountain in Khartoum, Sudan.

A system in disarray

Despite dozens of educators being behind the material changes, Garrai was at the center of the controversy.

Garrai said he received hundreds of death threats after a number of imams publicly called him an “infidel” — an accusation that is now considered illegal and punishable by law after the reversal of Sudan’s apostasy law.

Still, as the backlash grew, the prime minister called for a review of the new curriculum, effectively pausing the teachings in the middle of the school year.

For Garrai, who felt unsupported by the government, that was the last straw.

“Your government has chosen to side with the defunct regime. I chose the side of the people.”

“Your government has chosen to side with the defunct regime. I chose the side of the people,” he wrote in a scathing public resignation letter to the prime minister in January.

He sees it as a major win for conservative Islamists, moderates and other opponents competing to shape Sudan’s future.

Since then, Garrai hasn’t been replaced and amid other reshuffling, there’s no minister of education at the moment, either.

Garrai’s absence has also left Sudan’s education system in disarray, effectively trapping students across the country in a limbo between a restrictive Islamic past and aspiringly modern, if not secular, future.

Other schools simply ripped out the controversial pages and carried on with class. And that’s where things stand today — as students and parents prepare for the next school term that begins in August — there’s still no consensus about how and what Sudanese students will be learning.