It’s more than 100 degrees in Khartoum, but that hasn’t stopped hundreds of people from gathering in an open field to watch athletes wrestle each other to the sandy ground.

Many of the young wrestlers, and the audience for that matter, come from the Nuba Mountains, where this style of wrestling originates.

While people are here to enjoy the weekend sport, the politics of home are not far from their minds. Few can forget how the Nuba Mountains area has been in armed conflict with Sudan’s central government for decades. 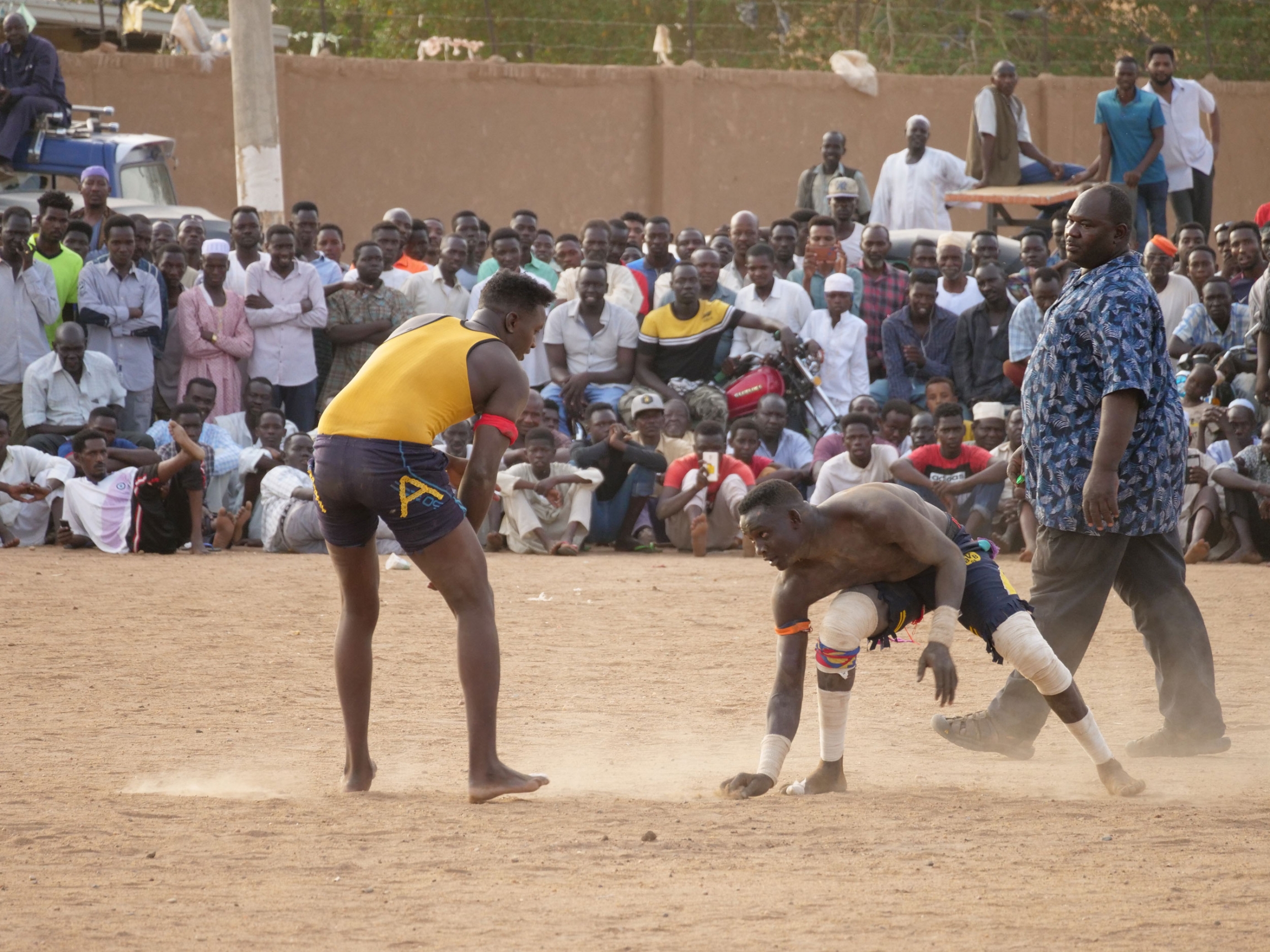 Wrestlers circle each other at a match in Khartoum, Sudan.

The Nuba Mountains in Sudan’s South Kordofan region is made up of predominantly Black African tribes who are religiously diverse — consisting of Christians, Muslims and animists alike. Mixed families are common.

For years, Nuba rebels fought against the aggressive regime of former President Omar al-Bashir, which pushed a strict Islamic and Arab version onto a diverse country. In 1993, he declared a holy war (jihad) against the region — calling them enemies to Muslims and Arabs.

But the 2019 uprising that saw Bashir removed from power has brought a chance for peace for people in the Nuba Mountains, and other conflict areas.

Sudanese protesters chant slogans during a rally outside the army headquarters in Sudan's capital Khartoum, April 20, 2019.

The Nuba rebels of the Sudan People’s Liberation Movement-North (SPLM-N) are negotiating with the transitional government, and reviving an age-old issue in Sudan: secularism, or the separation between religion and the state.

“As a guy from [the] Nuba Mountains, I support that,” Dawood said. “We need secularism in Sudan, so we can get out of that nonsense,” he added, referring to the violent military campaign against the Nuba.

For many Nubans, regardless of their religion, the issue of secularism is personal, says professor Guma Kunda Komey, a Christian Nuban who, until recently, was an official peace adviser to Sudan’s Prime Minister Abdalla Hamdok.

“They all see the people killed and bombarded. They were actually victimized under the name of Islam. And of course, it has nothing to do with Islam. But it was the politicization of Islam.”

“They all see the people killed and bombarded. They were actually victimized under the name of Islam. And of course, it has nothing to do with Islam. But it was the politicization of Islam,” he explained.

He says SPLM-N is using the opportunity of Sudan’s transition period to address what is sees as Sudan’s fundamental vice, and a barrier to national unity.

Earlier this year, the government and SPLM-N signed a principles agreement, declaring that Sudan has no state religion. 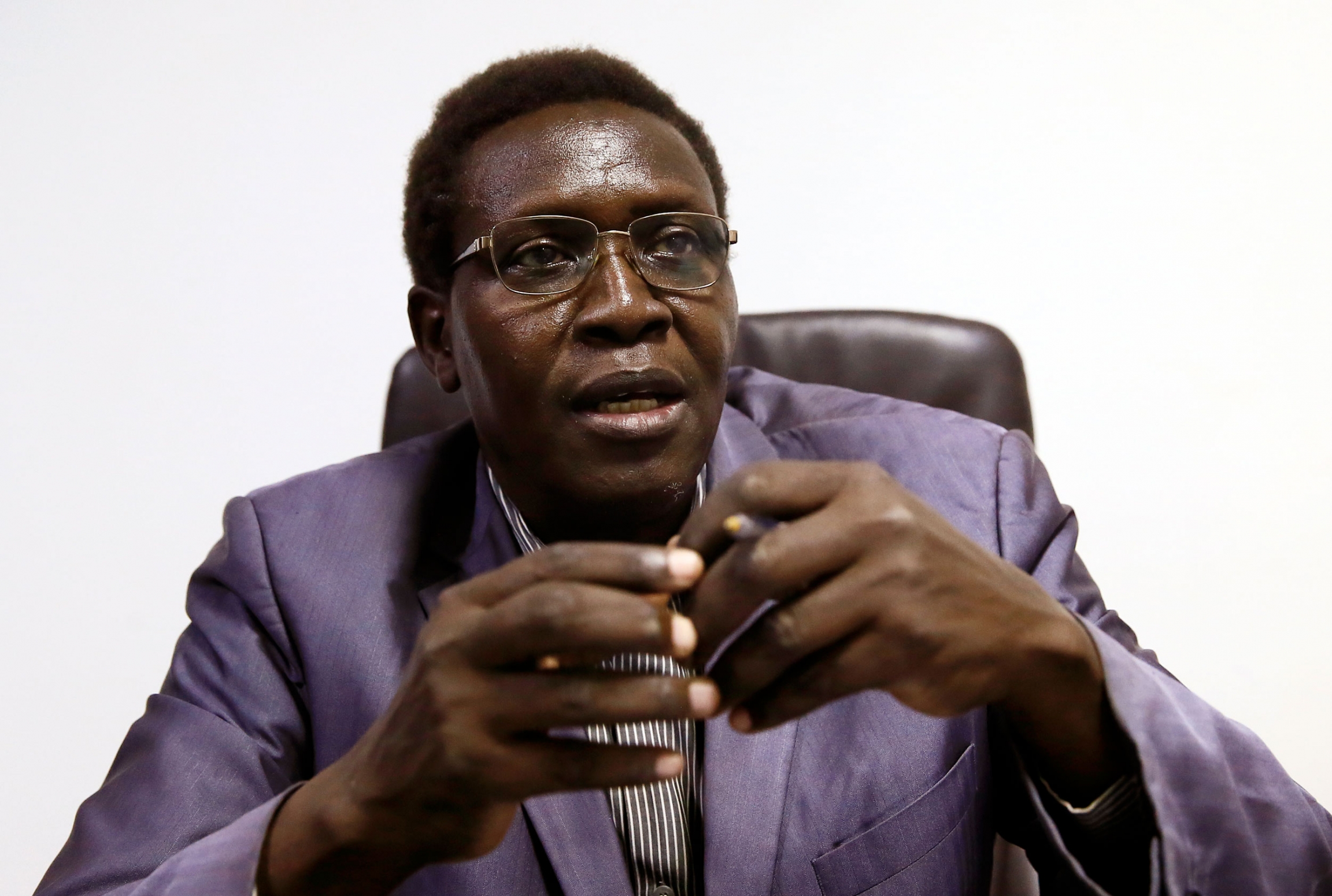 Guma Kunda Komey speaks during a meeting at his office.

The declaration was essentially a baseline for future negotiations, which recently stalled in June. Still, it signals a pivotal shift from the mindset of the previous regime, Komey said.

“The state of mind [that] the majority are Muslim in Sudan, and therefore, the governing system should be based on Islam, is something governing all parties,” but climaxed under Bashir, he said.

Related: In the wake of Chadian President Idriss Déby's death, a transitional military council will lead the country

The consequences of these policies, which failed to account for Sudan’s diversity, came to a head 10 years ago, when Christians in the south voted to secede and form South Sudan.

“One of the main reasons that actually separated the country [of] South Sudan was the unwillingness of the previous regime to repeal Sharia law from the country. That would actually have saved the country.”

“One of the main reasons that actually separated the country [of] South Sudan was the unwillingness of the previous regime to repeal Sharia law from the country. That would actually have saved the country,” he argued.

Many people from Nuba fear there’s a risk of other parts of the country breaking away, or of ongoing conflict, if Sudan is not able to take religious ideology out of government affairs.

As a government peace adviser, Komey said he brought in experts from Turkey, Nigeria and other countries with large or majority-Islamic populations (but secular constitutions) to meet with members of Sudan’s government.

“That actually opened minds that Sudan, which is majority Muslim, can still go secular without endangering people,” he said.

But in Sudan’s public sphere, secularism remains a provocative and emotional word for ordinary people.

“The meaning of secular has become corrupted in Sudanese politics, because it is equated with the anti-religion movement,” Komey explained. 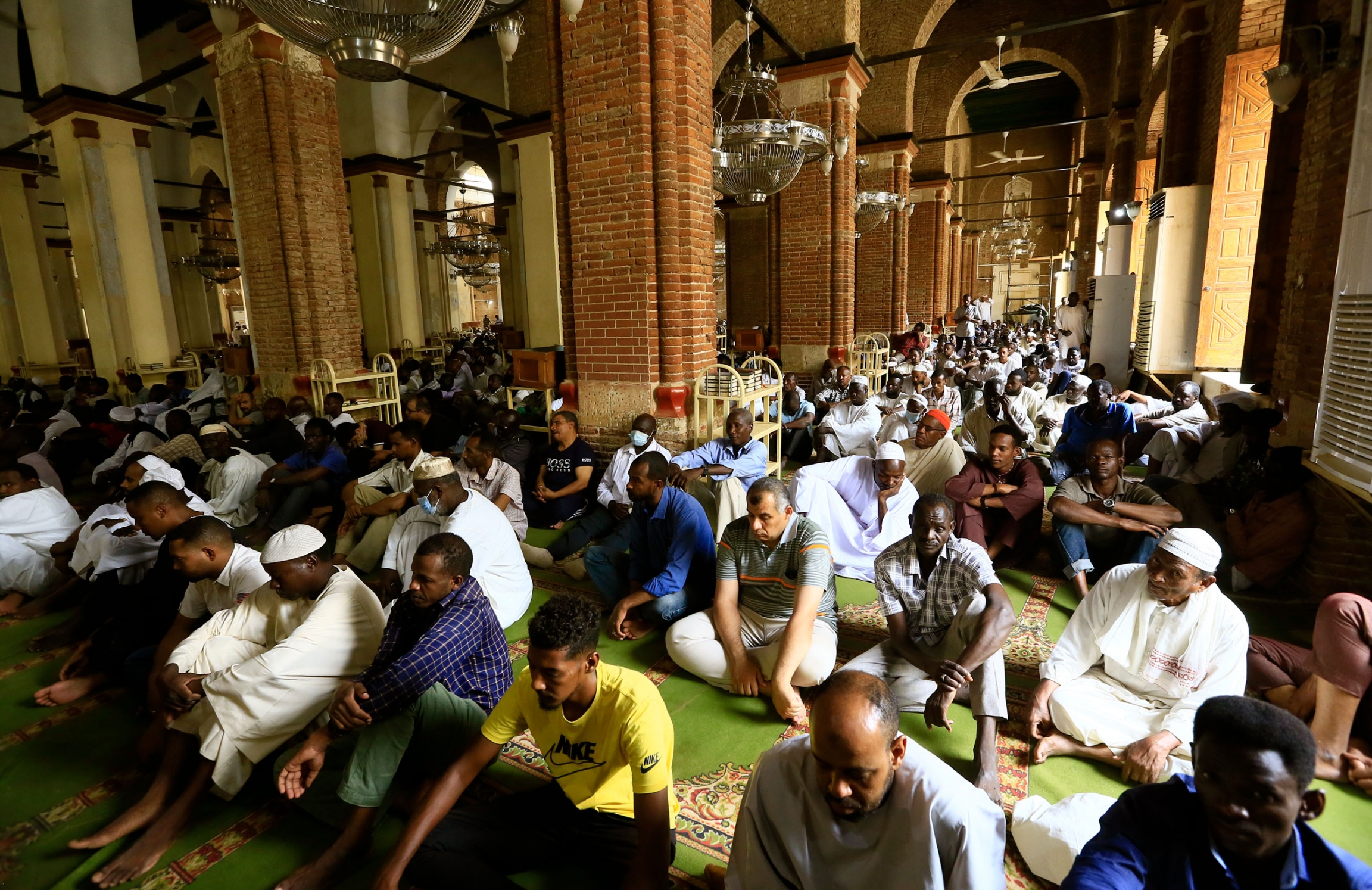 People gathered for Friday prayers at the Grand Mosque in Khartoum, Sudan.

Indeed, at the Grand Mosque in downtown Khartoum, secularism is a hot-button and divisive issue. Some support it, others don’t.

“Because we are Muslims, we all accept Islam. They can negotiate but they can’t decide. As Muslims, we won’t accept it,” said Sadiq Mohammed Ali, a businessman who prays there.

Ali adds that if the former government made mistakes, they should correct them — not change the system altogether.

He argues that only an elected government has the power to do that, not the transitional one, which is meant to steer the country to elections in a few years.

“Any issue regarding the future direction of the country should be left to a government mandated by the people.”

“Any issue regarding the future direction of the country should be left to a government mandated by the people,” said professor Hassan Elhaj Ali Ahmed, political scientist at the University of Khartoum.

He argued that the transitional government is going down a slippery slope by trying to “de-Islamicize” the country so quickly.

“Are we going to see a complete overhaul of our education system? Our judicial system? Our economic system?” Ahmed said.

Indeed, since 2019, the new government has pushed fast-paced social, legal and economic reforms, taking the mass popular protests against Bashir as a mandate to uproot elements of his reign.

But Ahmed warns that if the government makes too many changes on social and identity issues, they risk a backlash from religious conservatives.

“We have some aspects of society where there is a great influence of religion still going on. And people in Sudan, significant people, are religious by nature,” he said.