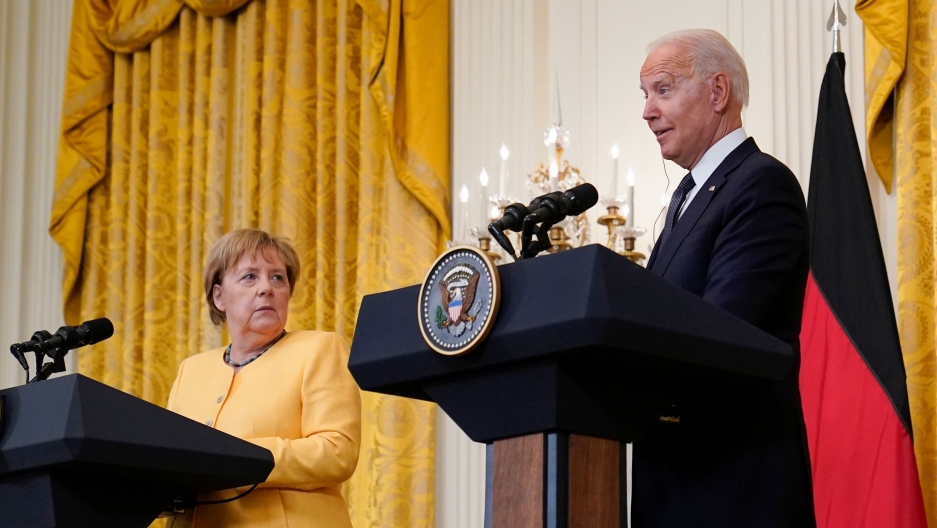 President Joe Biden and German Chancellor Angela Merkel during a news conference in the East Room of the White House in Washington, July 15, 2021.

The United States and Germany have announced a deal to allow the completion of a controversial Nord Stream 2 Russian gas pipeline to Europe without the imposition of further US sanctions. The agreement aims to stanch fears about European dependence on Russian energy, but it was immediately assailed by critics who said it doesn't go far enough.

Under the terms of the deal Wednesday, the US and Germany committed to countering any Russian attempt to use the pipeline as a political weapon. And, they agreed to support Ukraine and Poland, both of which are bypassed by the project and fear Russia's intentions, by funding alternative energy and development projects.

"The United States and Germany are united in their determination to hold Russia to account for its aggression and malign activities by imposing costs via sanctions and other tools," they said in a joint statement that covered Nord Stream 2 as well as Russia's support for separatists in Ukraine.

"Should Russia attempt to use energy as a weapon or commit further aggressive acts against Ukraine, Germany will take action at the national level and press for effective measures at the European level, including sanctions, to limit Russian export capabilities to Europe in the energy sector," it said.

The Nord Stream 2 project has posed a major foreign policy dilemma for the Biden administration. US officials from both parties have long feared that it would give Russia too much power over European gas supplies. But the pipeline is almost completed and the US has been determined to rebuild ties with Germany that were damaged during the Trump administration.

Poland and Ukraine expressed their displeasure over the decision to allow the pipeline's completion and said the efforts to reduce the Russian security threat were not sufficient.

"This decision has created a political, military and energy threat for Ukraine and Central Europe, while increasing Russia's potential to destabilize the security situation in Europe, perpetuating divisions among NATO and European Union member states," the Polish and Ukrainian foreign ministers said in a joint statement.

The agreement is not a clear political win for either President Joe Biden or German Chancellor Angela Merkel, an unabashed supporter of the pipeline who will step down later this year. For Biden, he risks appearing weak as it relates to Russia, and Merkel's governing party faces a serious challenge from Germany's Green Party, which opposes the pipeline, in September elections.

Still, the two sides committed to supporting a $1 billion fund for Ukraine to diversify its energy sources, of which Germany will provide an initial $175 million grant. And, Germany guaranteed that it would reimburse Ukraine for gas transit fees it will lose from being bypassed by Nord Stream 2 until 2024, with a possible 10-year extension.

The Kremlin said Russian President Vladimir Putin spoke with Merkel on Wednesday and they discussed the possibility of extending a deal on transit of Russian gas via Ukraine after 2024.

In a nod to Poland, Germany also agreed to sign onto the "Three Seas Initiative," an EU and US-promoted scheme that aims to boost investment, infrastructure development and energy security among the countries bordering the Baltic, Black and Adriatic seas. The German government, the statement said, would help to contribute up to $1.7 billion of European Union funding for the initiative through 2027.

Despite the agreement, there remains strong bipartisan opposition to the pipeline in Congress, as well as in Ukraine and Poland, and like the Trump administration before it, the Biden administration also says it opposes the pipeline. US officials have said sanctions won't stop it.

The top Republican on the House Foreign Affairs Committee, Rep. Michael McCaul of Texas, said he had no doubt Russia "will use the Nord Stream 2 pipeline as a weapon of coercion against Ukraine and transatlantic energy security as soon as it is operational. Promises to invest in future Ukrainian energy projects and ambiguous threats of consequences won't change that reality."

"I am not yet convinced that this agreement — or any bilateral agreement — can sufficiently provide assurances to our European allies and minimize the considerable economic impact and security implications of this pipeline's completion," Shaheen said in a statement.

The State Department's third-ranking official, Under Secretary of State for Political Affairs Victoria Nuland, categorically denied reports that Ukraine had been warned against publicly complaining about the agreement and noted that the State Department's counselor, Derek Chollet, was visiting both Kyiv and Warsaw this week to inform them of the deal. She told lawmakers on Wednesday that the deal was the best way to deal with the situation.

In another effort to appeal to Ukraine the White House announced that Biden would welcome Ukrainian President Volodymyr Zelenskyy to Washington on Aug. 30. An invitation for "later this summer" had been announced in June before Biden met Putin in Geneva, but a date had not been set until Wednesday.

"The visit will affirm the United States' unwavering support for Ukraine's sovereignty and territorial integrity in the face of Russia's ongoing aggression in the Donbas and Crimea, our close cooperation on energy security, and our backing for President Zelenskyy's efforts to tackle corruption and implement a reform agenda based on our shared democratic values," the White House said.

Biden's approach to Ukraine is also a sensitive political subject. Former President Donald Trump's attempt to pressure Zelenskyy to dig up dirt on Biden and his son led to Trump's first impeachment. He was later acquitted by the Senate.

Nord Stream 2 has been a topic of intense debate between US and German officials for some time and it was a major agenda item during Biden's meeting with Merkel last week. Like the Trump administration before it, the Biden administration regards the pipeline as a threat to European energy security and has imposed sanctions on some of those involved in building it.

Nuland said the US continues to oppose the pipeline but said Biden had waived sanctions against the German company constructing the pipeline and its top executives because the penalties would have been counterproductive to broader US interests.

She and others have defended the waivers, saying they can be rescinded at any time and that threat actually gives the US more leverage. Biden administration officials have said repeatedly that the pipeline was a foregone conclusion by the time the president took office. That argument has been scoffed at by pipeline opponents.