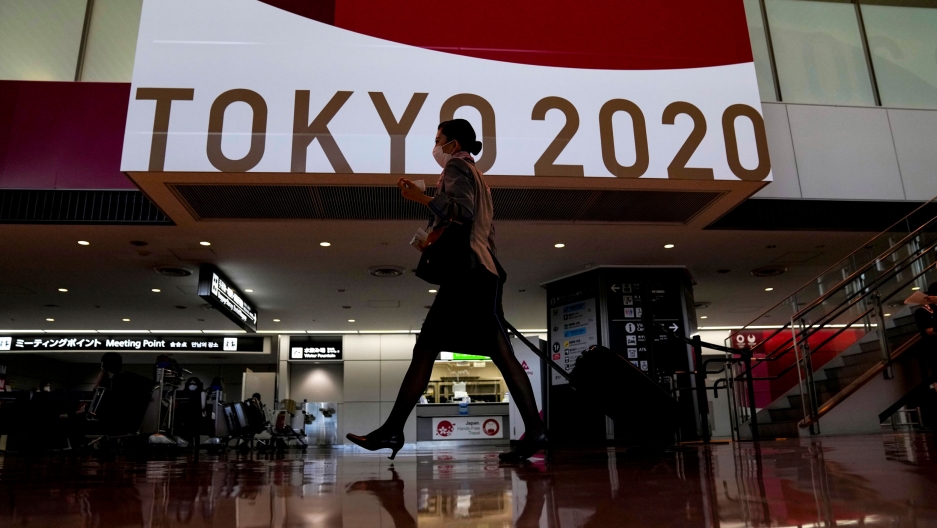 A flight attendant walks by a display of Tokyo 2020 Olympics at Narita International Airport, July 15, 2021.

Olympics
The director of the opening ceremony for the Tokyo Olympics was fired on Thursday over accusations of a Holocaust joke he made many years ago. The organizing committee for the games dismissed Kentaro Kobayashi, just one day before the pandemic-delayed opening ceremonies are set to take place. Kobayashi allegedly used the Holocaust in a joke he made during a comedy show in 1998. The scandal is just the latest for the controversy-plagued games that has included allegations of bribes paid to International Olympic Committee members and multiple forced resignations.

Iran
Iran has begun bypassing the Strait of Hormuz after opening its first oil terminal in the Gulf of Oman. The $2 billion project is part of an effort to lessen Iran’s dependency on its main oil export terminal in the Persian Gulf and allow Iranian tankers to avoid the vulnerable and narrow Strait of Hormuz, where tensions with the United States and others often flare up. Iranian President Hassan Rouhani called the project “strategic” and suggested the new facility could eventually export as much as 1 million barrels of oil per day.

Norway
Church bells rang out on Thursday as thousands of people gathered at events across Norway marking 10 years since neo-Nazi, right-wing extremist Anders Breivik set off a bomb in Oslo, killing eight people, before traveling northwest where he shot dead another 69 people — mostly teens — on Utoya island. Jens Stoltenberg, Norway's prime minister in 2011, at the time of the attacks, said at Oslo Cathedral that, “10 years ago we met hatred with love, but the hatred is still there.” Breivik was sentenced to 21 years in prison.

After the revolution, a secular Sudan? 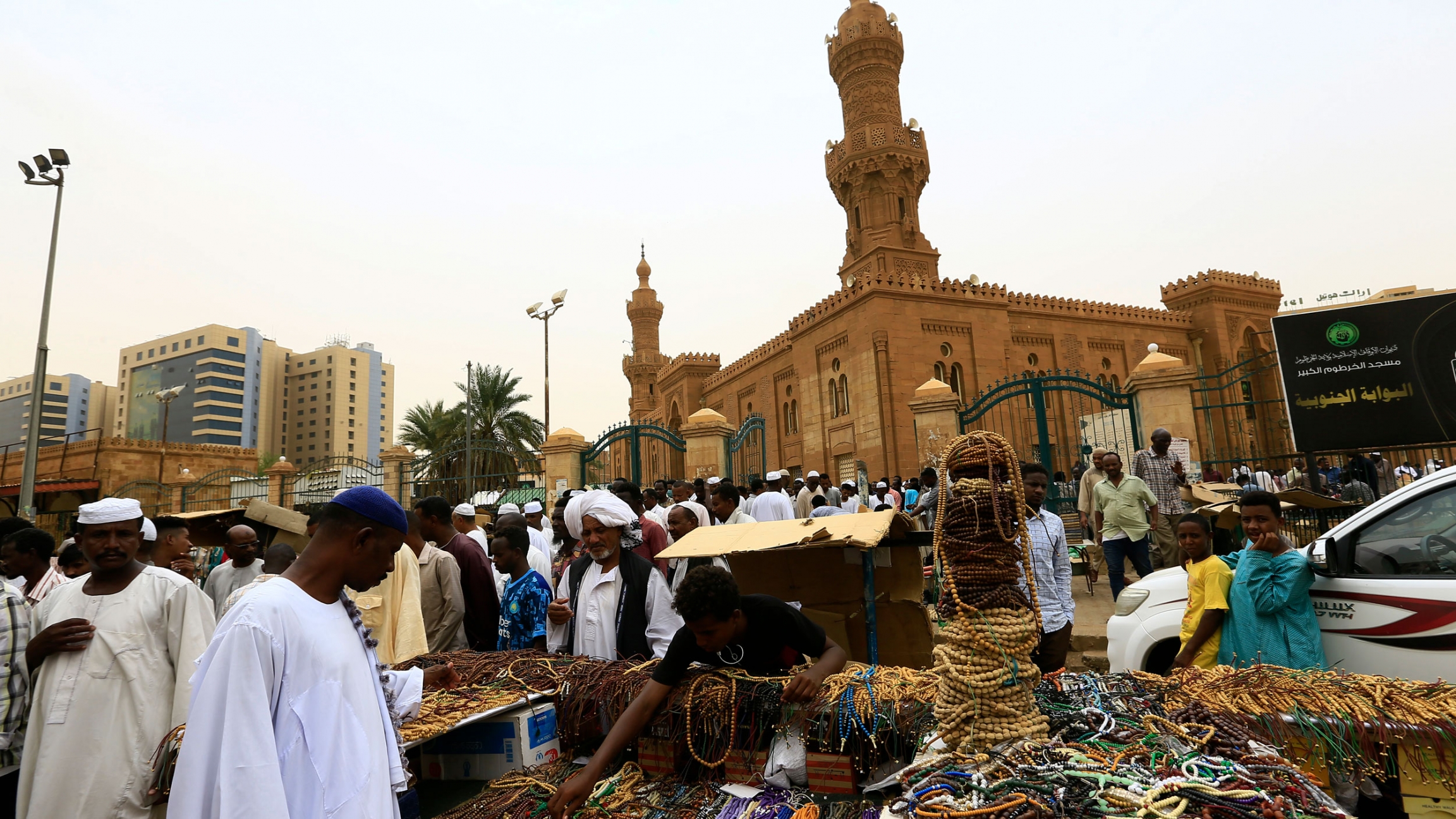 A vendor sells his wares outside of the Grand Mosque in Khartoum, Sudan.

The Nuba rebels of the Sudan People’s Liberation Movement-North are negotiating with the transitional government, and reviving an age-old issue in Sudan: secularism, or the separation between religion and the state. 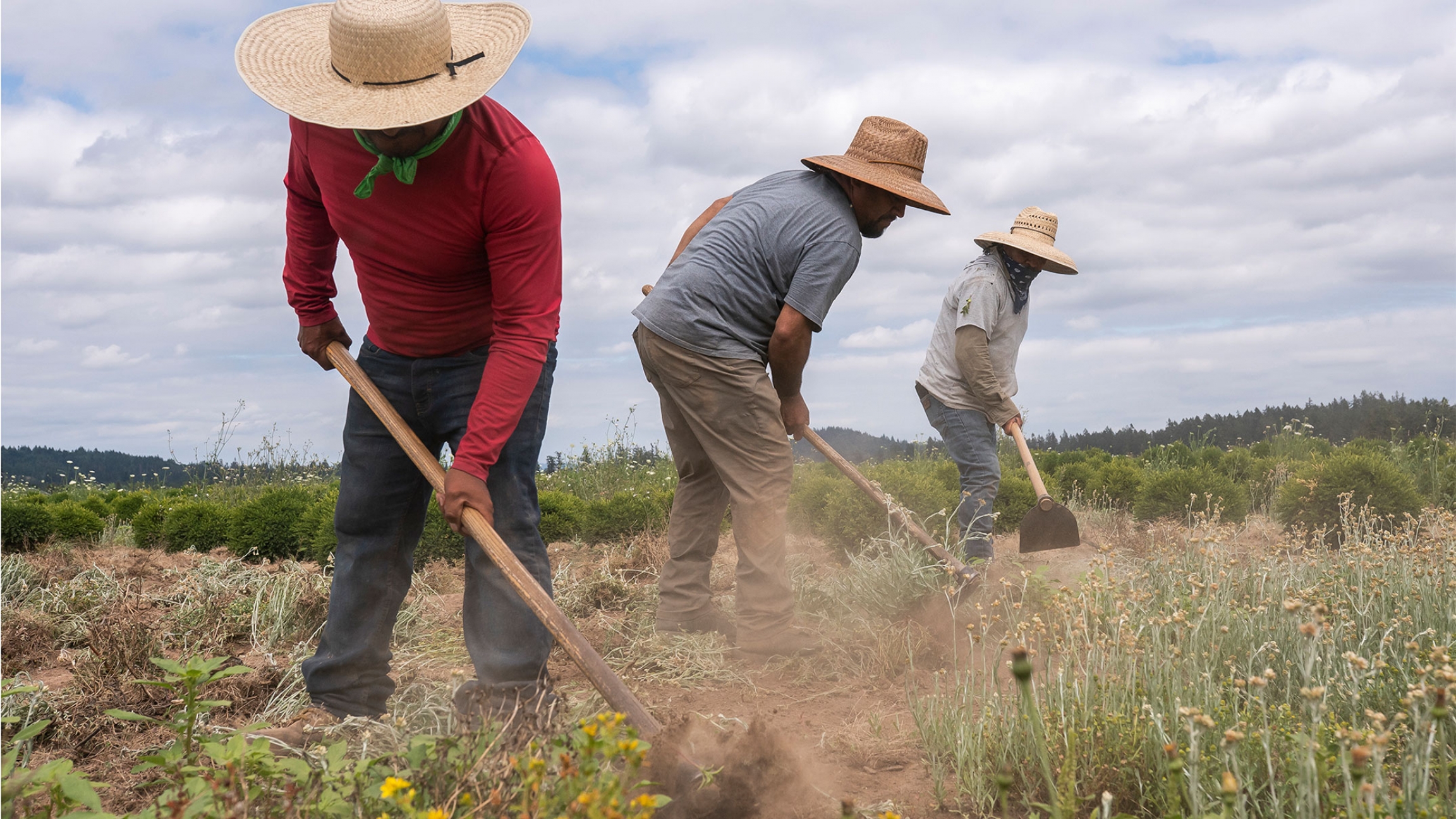 Farmworkers are 35 times more likely to die from a heat-related death than other occupations. Roxana Chicas, a nurse and assistant professor at Emory University School of Nursing in Georgia, told The World's host Marco Werman that more needs to be done to protect farmworkers' rights.

"[F]armworkers are 35 times more likely to die from a heat-related death, compared to other occupations, and we have documented that they sometimes work with a fever ... many of them are chronically dehydrated," Chicas said. "They suffer from heat-related illness symptoms. Some of them are even suffering from acute kidney injury."

Dakota Camacho wanted to understand the complexities of the Chamorro people's history, and in the process, developed a unique hip-hop style. You can take a listen for yourself! ( 🎧) 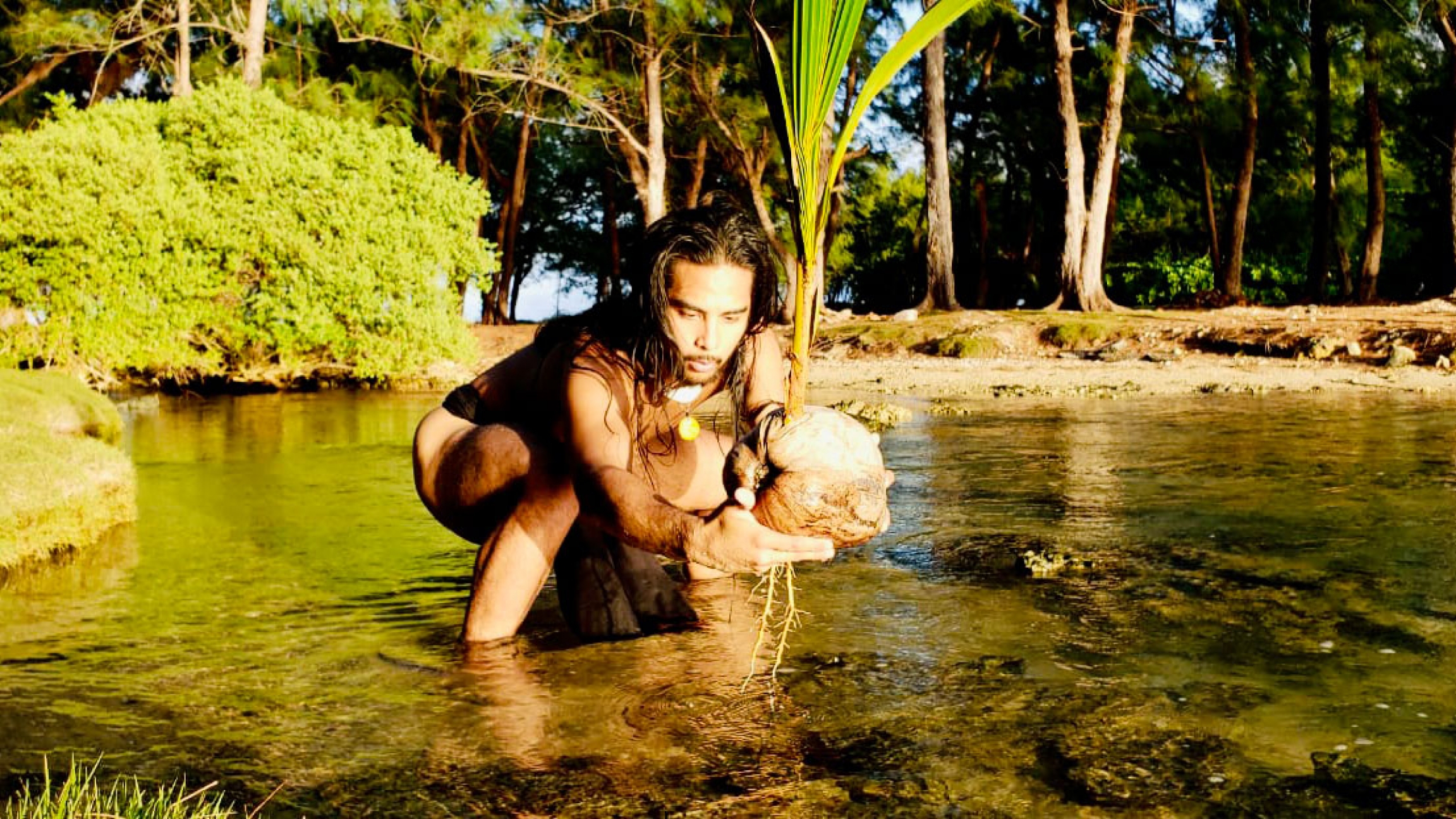 Dakota Camacho is a Seattle-based dancer and musician with roots in Guam. Their quest to understand their ancestral history led to the development of a unique hip-hop style. 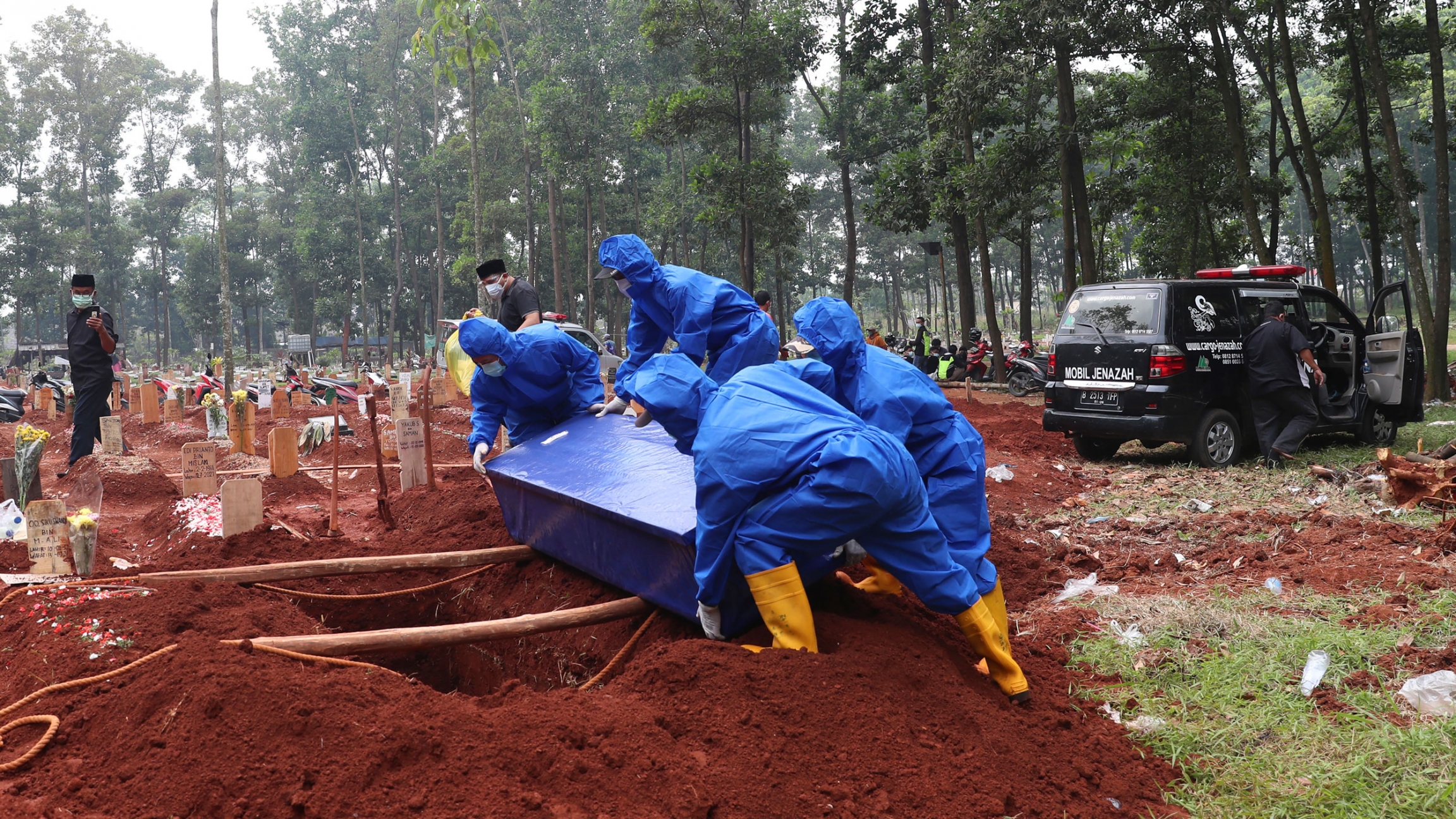 Workers in protective suits carry a coffin containing the body of a COVID-19 victim to a grave for a burial at Cipenjo cemetery in Bogor, West Java, Indonesia, Wednesday, July 14, 2021.

COVID-19 is tearing through Indonesia, where the total case count is nearing 3 million and the infection rates have skyrocketed since mid-May. And today, UNESCO announced it is revoking Liverpool’s World Heritage status, over concerns about the city's waterfront redevelopment plans. Also, a rocket attack in Kabul, near the presidential palace, is yet another reminder of the worsening security situation in Afghanistan, with most US troops having already left. And, Seattle-based artist Dakota has roots in Guam. By researching the island's history, Dakota developed a unique hip-hop style.