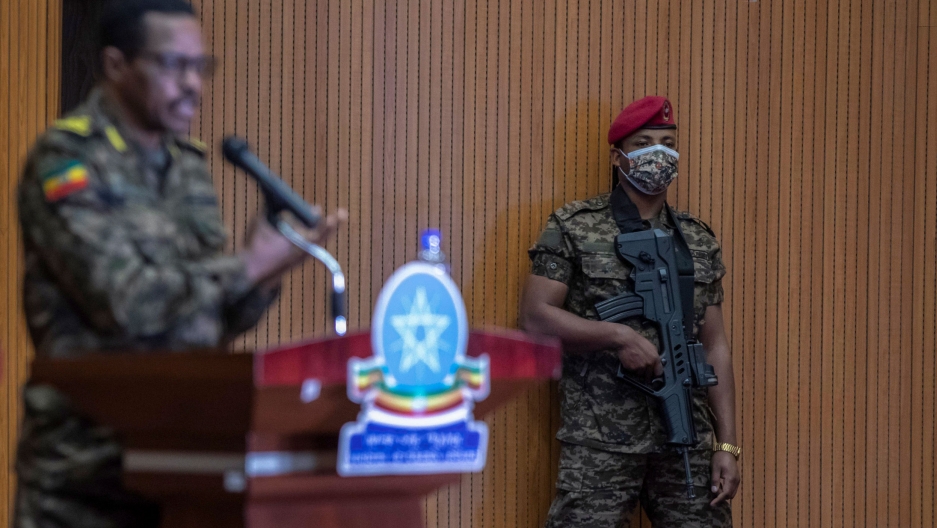 A member of the military stands guard as Lieutenant-General Bacha Debele of the Ethiopian National Defense Force (L) gives a joint press conference with State Minister of Foreign Affairs and Spokesperson for the State of Emergency Taskforce Redwan Hussein about the current situation in the country's northern Tigray region, in the capital Addis Ababa, Ethiopia, June 30, 2021.

Tigray conflict
The government of Ethiopia has said it could re-enter the Tigray region, just days after pulling out its troops and declaring a unilateral ceasefire. The Tigray People’s Liberation Front’s, which has made territorial gains in the embattled region, has rejected the ceasefire, calling it a “sick joke,” and has vowed to chase down Ethiopian and Eritrean troops that joined forces in the nearly eight-month war. The Tigray forces' spokesman, Getachew Reda, said that there will be no negotiations until communications, transportation and other services destroyed by the war are restored.

Canada heat wave
Dozens of people have died in western Canada amid a scorching heat wave that has set record high temperatures. While the deaths are still under investigation, authorities believe that the heat is a contributing factor in dozens of sudden deaths of mostly senior citizens. Canada broke its own record for a third straight day on Tuesday — reaching 121.3 F in Lytton, British Columbia. A dome of static high-pressure hot air stretching from California to the Arctic territories has created the heat wave over western parts of Canada and the US.

North Korea COVID-19
North Korean leader Kim Jong-un admonished top officials at a specially-convened Politburo meeting for failures in COVID-19 prevention tactics that have caused a “great crisis” in the country. In the remarks, reported by state news agency KCNA, Kim added that they "caused a grave incident that has caused a great risk to people and the nation's safety." The rare comments could signal an outbreak in North Korea, a country that has claimed to have had no infections of the  novel coronavirus.

The politics of Ireland’s enduring support for Palestinians 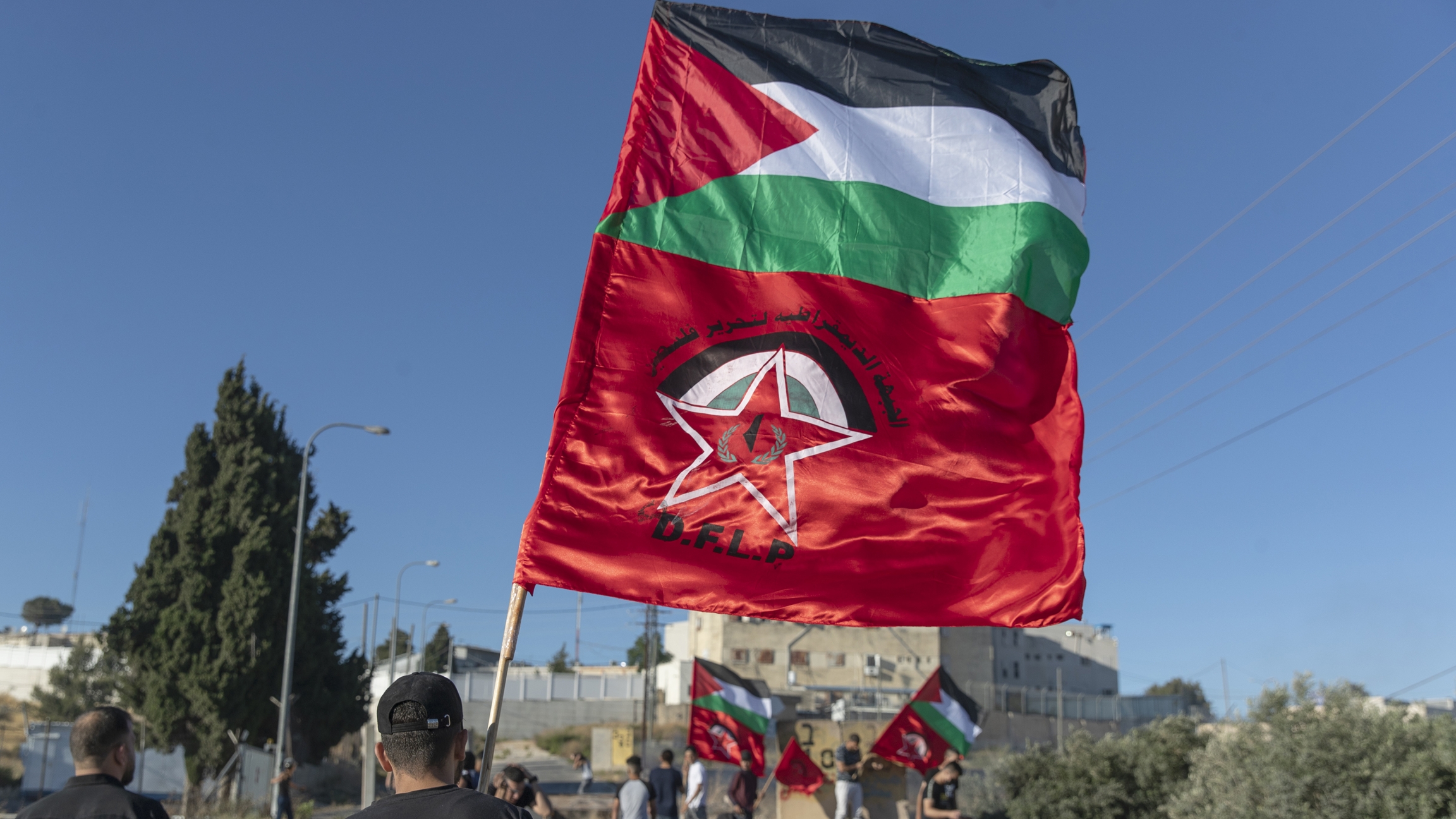 Palestinian protesters fly Palestinian flags and flags of the Democratic Front for the Liberation of Palestine, DFLP, during clashes with Israeli soldiers at the entrance of the Jewish settlement of Beit El near the West Bank city of Ramallah, June 15, 2021.

Ireland has become the first European Union country to declare that Israeli settlements in the Palestinian territories amount to de facto annexation. The vote in the Irish Parliament followed a motion by Sinn Féin party lawmaker John Brady, who said it reflected the “concern of the Irish people at the plight of the Palestinian people.” Irish Foreign Minister Simon Coveney said the unanimous vote was a “clear signal of the depth of feeling across Ireland.” 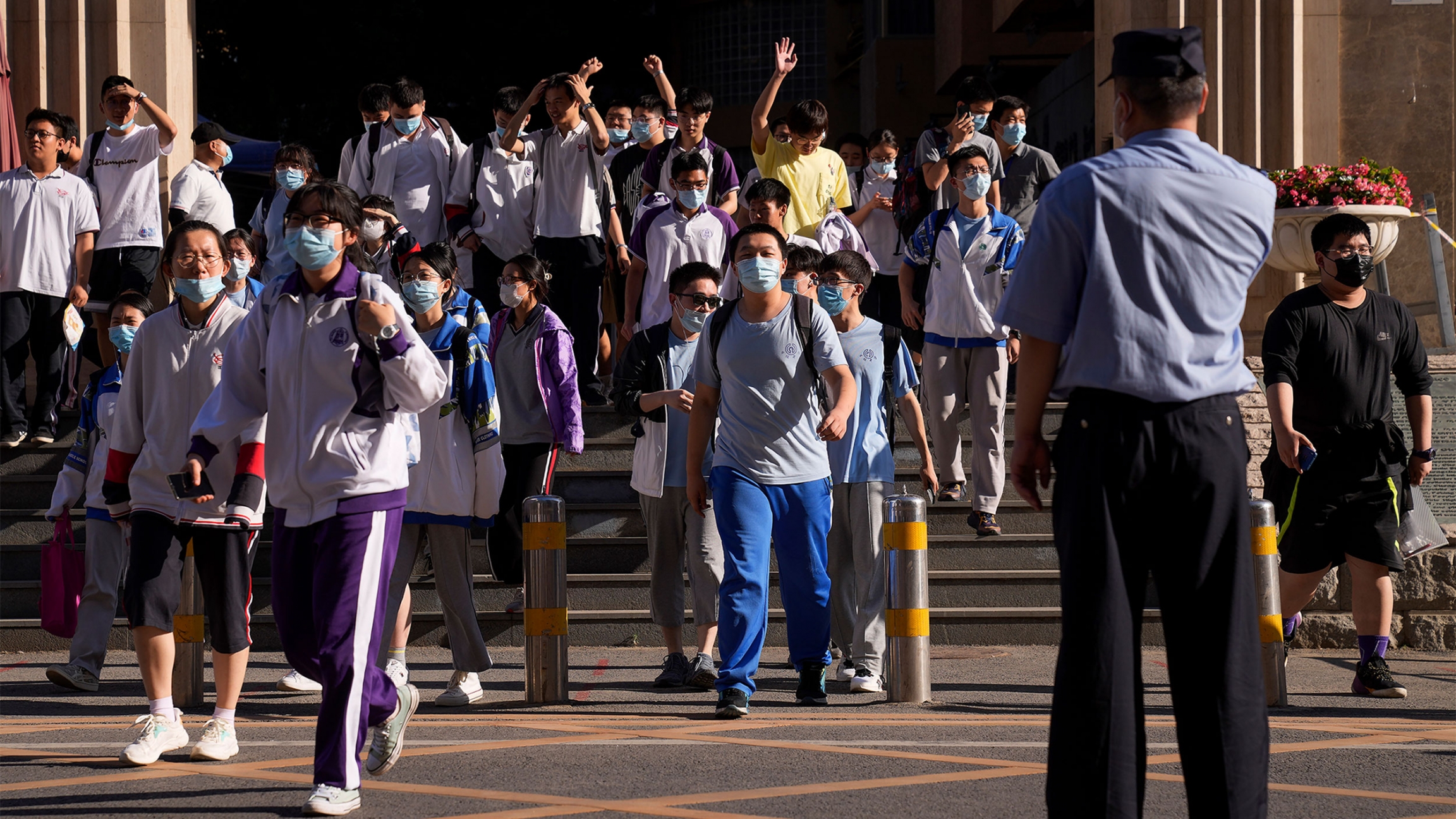 A police officer watches students, some wearing face masks to help curb the spread of the coronavirus, leave the school after concluded their China's national college entrance examinations, known as the gaokao, in Beijing, June 10, 2021.

The new TV show, "A Little Dilemma," follows two families in their different approaches to their children's education, giving real families in China something to relate to and reflect upon. The results of the Gaokao, China’s high-pressure college entrance exam, were released last week, with a record number of students sitting for the test this year. The show attempts to turn parents’ anxiety about the exams into entertainment.

Authorities have recovered paintings by Pablo Picasso and Piet Mondrian that were stolen from the National Gallery in Athens, Greece, nearly a decade ago. They were found in a gorge after a builder admitted to stealing them in an overnight raid. But then in an unfortunate twist, Picasso's "Head of a Woman" painting slipped to the floor while being displayed at a news conference!

Recovered Picasso painting slips on to the floor during news conference https://t.co/W3KrOsxIWj

Listen: Afghans pick up arms against the Taliban 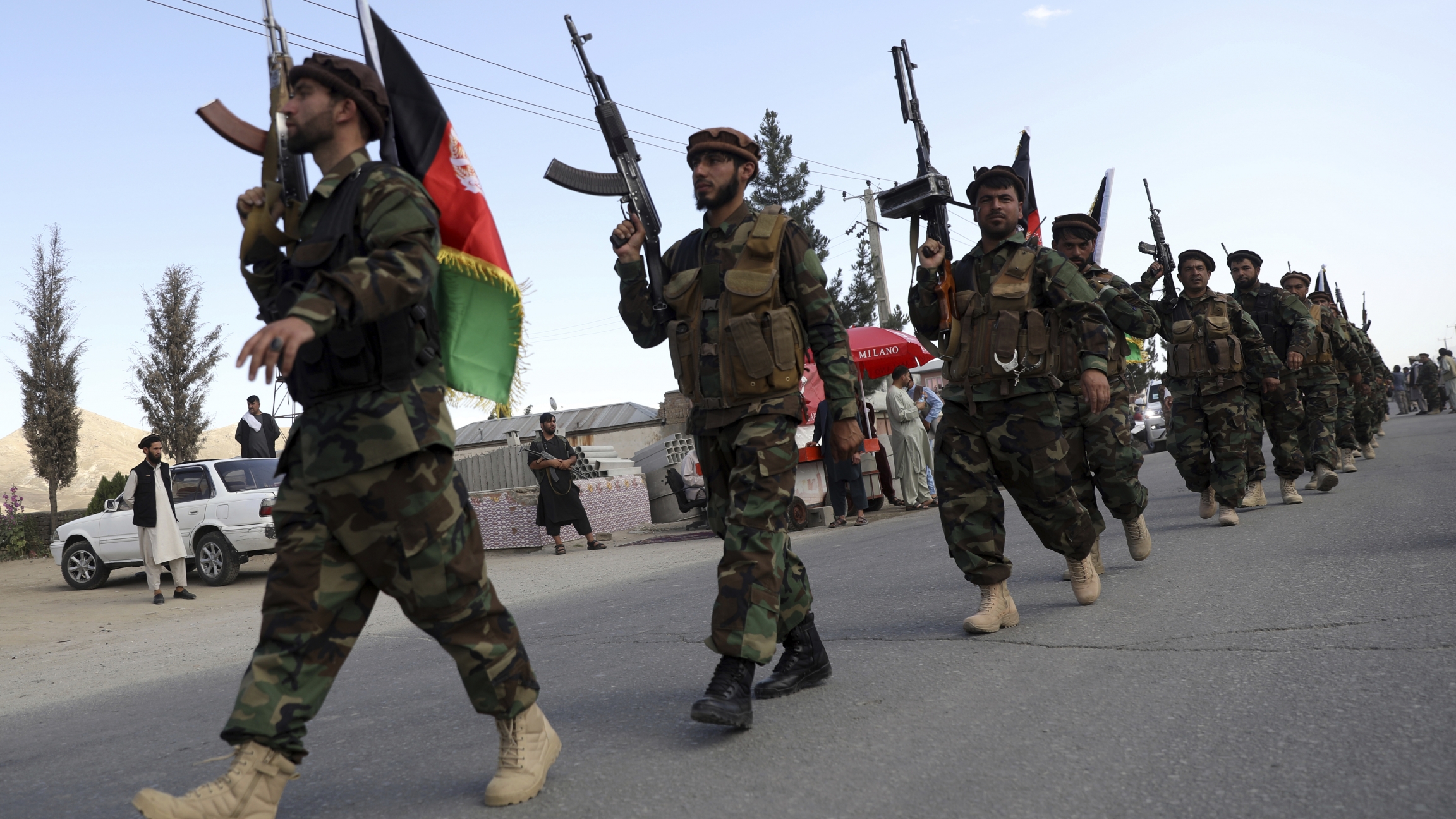 Taliban fighters have taken over several districts since the US announced its unconditional troop withdrawal. To counter the insurgents, some Afghans are taking up arms. And, Ethiopia declared a unilateral ceasefire in the Tigray region on Monday, putting an end to nearly eight months of fighting that pushed hundreds of thousands into starvation. Also, Guam's surplus of vaccines — and hotel vacancies — has inspired "Guam AirVnV."