Palestinian theater artist Amir Abualrob got an unexpected welcome when he landed at the Dublin airport in Ireland two years ago.

Abualrob was stopped at border control — an Irish customs official asked how long he was planning to stay.

Abualrob said he produced documents proving he had the right to stay for 15 days. The official asked if he had any interest in staying longer. Abualrob said he’d love to, and with that, the official added an extra five days to his visa and waved him through, adding: “Welcome to Ireland.”

When the Irish Parliament (Dail) voted unanimously to condemn the building of Israeli settlements in the Palestinian territories last month, calling it a “de facto annexation,” Abualrob said he was overjoyed. He'd heard about Ireland's strong support for Palestinians while growing up at the Jenin refugee camp in the Palestinian-controlled West Bank.

Related: 'Apartheid' is used to describe Israel's control over Palestinians

“You know, that's an honor. Honestly, as Palestinians in this country, we are respected and to do this action, I felt so proud.”

The vote in the Irish Parliament came about following a motion by Sinn Féin party lawmaker John Brady. The Irish member of Parliament said his motion reflected the “concern of the Irish people at the plight of the Palestinian people.”

“The memory and the consequence of colonization lives in the very marrow of our bones."

“The memory and the consequence of colonization lives in the very marrow of our bones,” Brady said.

Irish Foreign Minister Simon Coveney said the unanimous vote was a “clear signal of the depth of feeling across Ireland.”

The following day, the Irish tricolor was raised above city hall in Ramallah, in the West Bank.

Related: Biden is 'no savior' for Palestinians, should hold Israel 'to account' 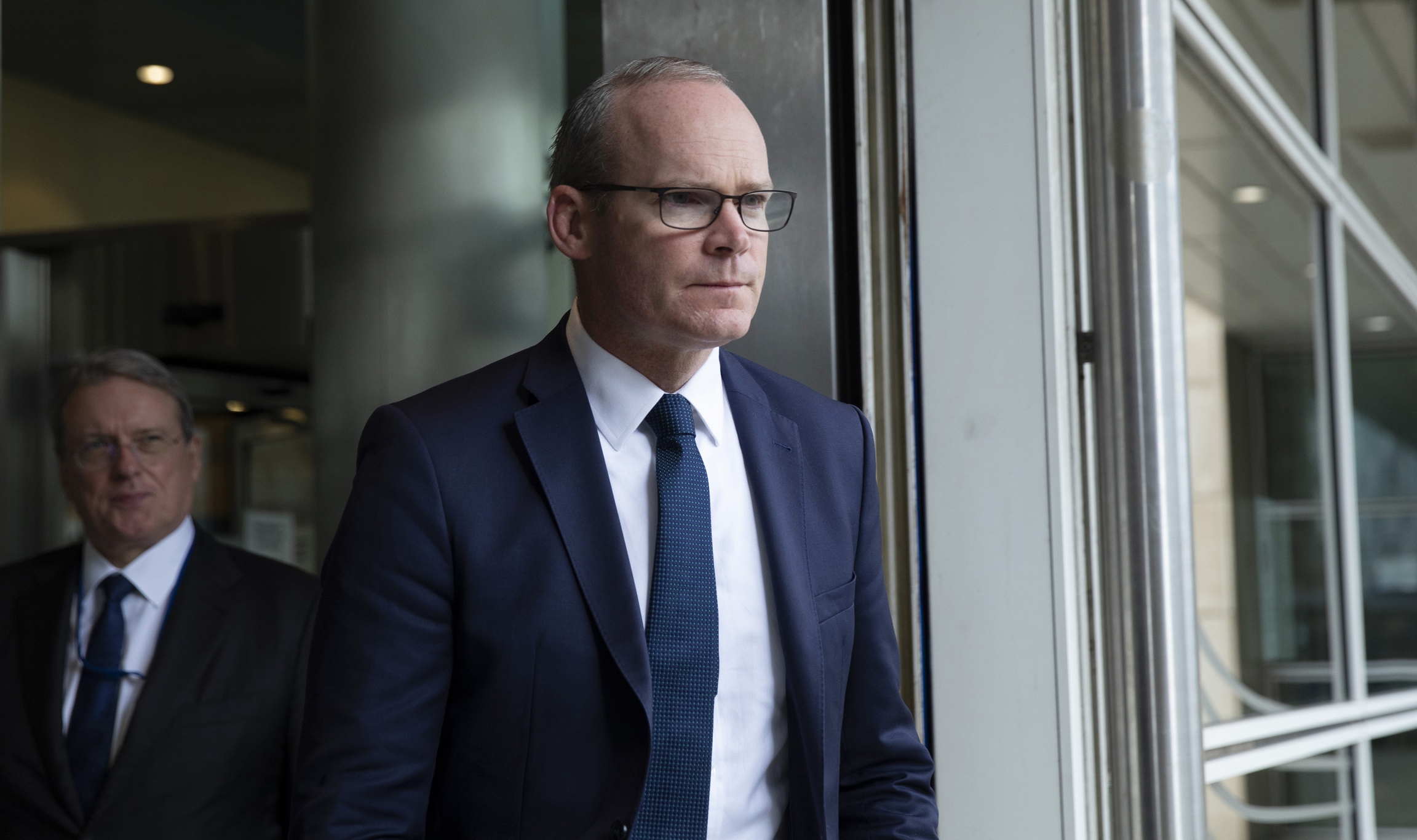 In this Friday, Sept. 27, 2019 file photo, Irish Foreign Minister Simon Coveney leaves EU headquarters in Brussels. Ireland’s parliament has on Wednesday, May 26, 2021, passed a motion describing Israeli settlements in Palestinian territories as “de facto annexation’’ — some of the strongest language ever offered by a European Union nation on the issue.

Up until the 1930s, there was a certain amount of sympathy in Ireland for the Zionist movement, aimed at the establishment of a Jewish state.

Rory Miller, a professor of government at Georgetown University in Qatar, said Irish support for the Zionist cause was “primarily and overwhelmingly because it was seen as a similar battle to remove British colonialism as was going on in Ireland.”

Both sides recognized the other as dispossessed. In the late 1930s, Irish sympathies began to shift.

Miller, also the author of “Ireland and the Palestine Question 1948-2004,” said when most of the Zionist movement endorsed the British proposal for partition of the Palestinian territories in the late 1930s, it changed Ireland's thinking.

For Irish leaders, partition was an absolute anathema, he said.

“Now, you have the Zionists on the same side as the British, and the Arab inhabitants of Palestine were now seen as the victims of this colonialist struggle."

Then-Prime Minister Eamon De Valera denounced the proposed partition as cruel and unjust — and a reminder of Ireland’s own division by the British. 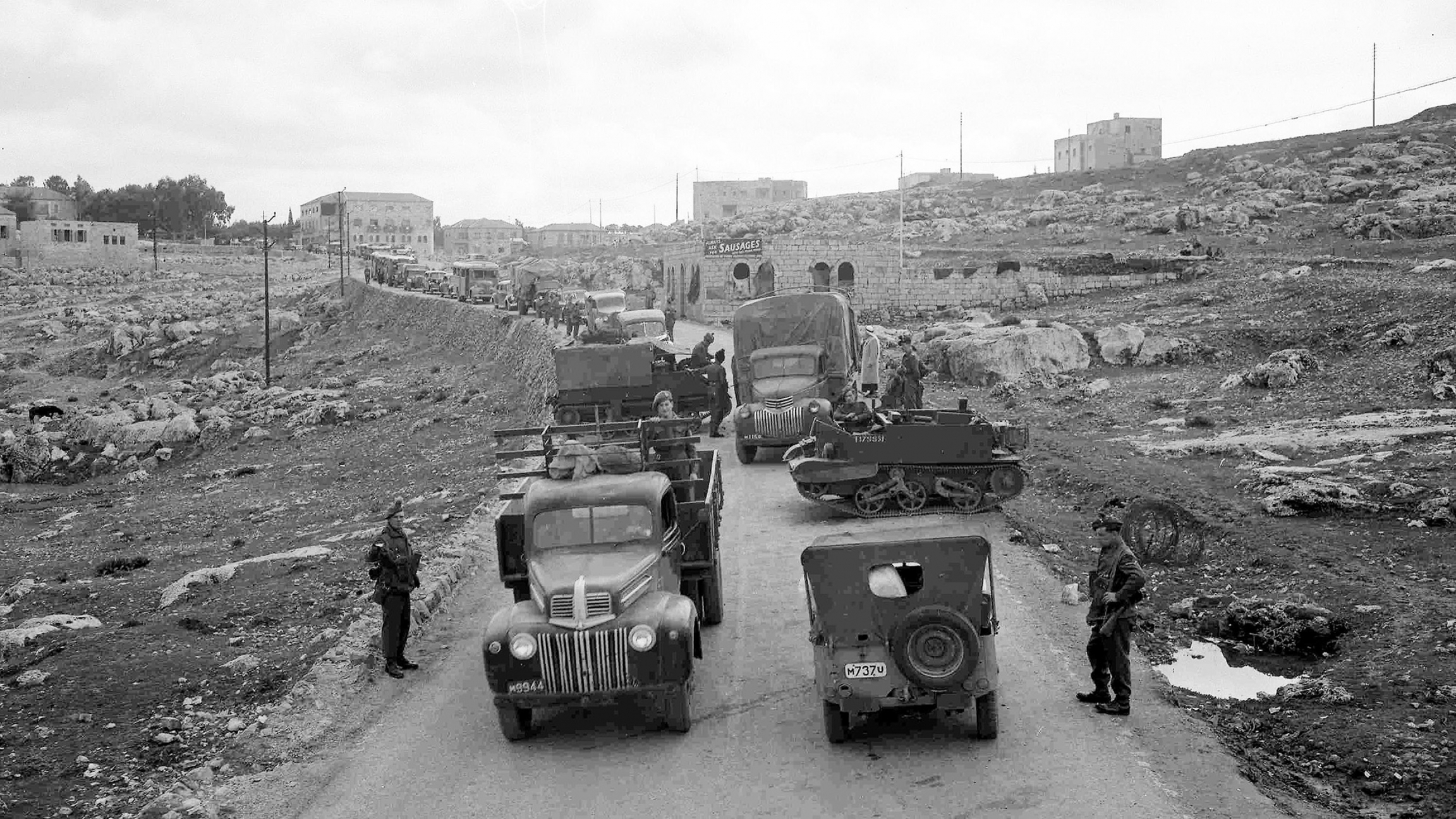 A line of vehicles, stretching for almost a mile, waits to pass through a road block on the main road from Jerusalem to Tel Aviv, Feb. 6, 1947. The road block is manned by members of the Royal Irish Fusiliers.

The Catholic Church played a part, too. Miller said the church did not accept Israel's control over Jerusalem once it was declared an independent state in 1948, and the Irish government fell in line with that perspective.

But it was after the 1967 war when Israel occupied the West Bank and Gaza that Irish support for Palestinians really intensified. From the late 1970s, Irish troops were deployed in the region as part of a United Nations peacekeeping force.

Related: The blockade on Gaza hampers life and reconstruction

Vincent Durac, associate professor of Middle East studies at University College Dublin, said with tens of thousands of Irish men and women serving as soldiers in the area, in particular on the border with Israel, their experience influenced opinion back home.

The view appears to be largely pro-Arab, pro-Palestinian, Durac said.

Irish political party Sinn Féin has long been an outspoken defender of the Palestinian cause. The left-wing party, once shunned for its ties with the Irish Republican Army, now holds considerable sway in mainstream politics. In the 2020 Irish general election, the party won the popular vote and the second-highest number of seats in Parliament.

Durac said he suspects Sinn Féin's popularity may have influenced the centrist ruling coalition to support the motion condemning Israel.

But not everyone in Ireland agrees with the government’s position.

Former Minister of Justice Alan Shatter, who is Jewish, said the political debate around the issue was “toxic” and passing the motion was “a sad day” for the Irish Parliament.

Shatter, who is now retired, said with no Jewish lawmakers in Irish Parliament today, it gives members free rein to say what they like and he views some recent comments as anti-Semitic.

Shatter said he understands why governments would criticize Israeli tactics and, at times, he has done so himself. But some political statements made by Irish lawmakers were unacceptable, he said.

“You even had members of the Dail referencing Israel as replicating the conduct of Nazi Germany. This is rhetoric that you expect in the Iranian Parliament. You don't expect it in the Irish Parliament.”

Ireland has a small Jewish community with less than 3,000 people.

The former justice minister said many have been rattled by the government’s position on Israel.

Reports of incidents of anti-Semitism have risen in Europe since violence erupted in the Gaza strip in May. Shatter said he’s not aware of any physical attacks against Ireland’s Jewish community but worries that comments made in Parliament could stoke anti-Semitic behavior.

“The sort of rhetoric may sound smart to catch a news headline, but it's dangerous. It's damaging. And my concern is that one day, it's going to result in some tragedy in Ireland.”

The Ireland Palestine Solidarity Campaign wants the government to enact the Occupied Territories Bill that would ban imports from illegal Israeli settlements in the Palestinian territories.

Aisling Micklethwaite, the vice-chair of the campaign, said this would show the Irish government is serious about the motion it passed.

Sinn Féin has also called for the expulsion of the Israeli ambassador from Ireland. Professor Durac at University College Dublin said this is not going to happen without EU consensus, and it is highly unlikely EU member states would agree to it.

Former Justice Shatter said Israel was somewhat taken aback by Ireland’s parliamentary motion. But he also said that “Israelis regard Ireland as the state in Europe which is most hostile to Israel.”

The Irish motion may have little actual impact but it is symbolic.

“The fact that you have an EU member that is making these statements publicly on a political level that has good connections and good influence in Washington is not to be dismissed."

“The fact that you have an EU member that is making these statements publicly on a political level that has good connections and good influence in Washington is not to be dismissed,” Miller said.

Abualrob, the Palestinian theater artist in Dublin, said the past few months have been tough. Watching the outbreak of violence in the region in May was heartbreaking, he said.

His family, who still lives just outside the West Bank town of Jenin, were not personally affected, but he still worries and would like to return home one day.

“I really miss Palestine because, you know, all my memories, everything that I belong to, it's there.”

But for now, Abualrob said he’s content to live in a place that makes him feel welcome.