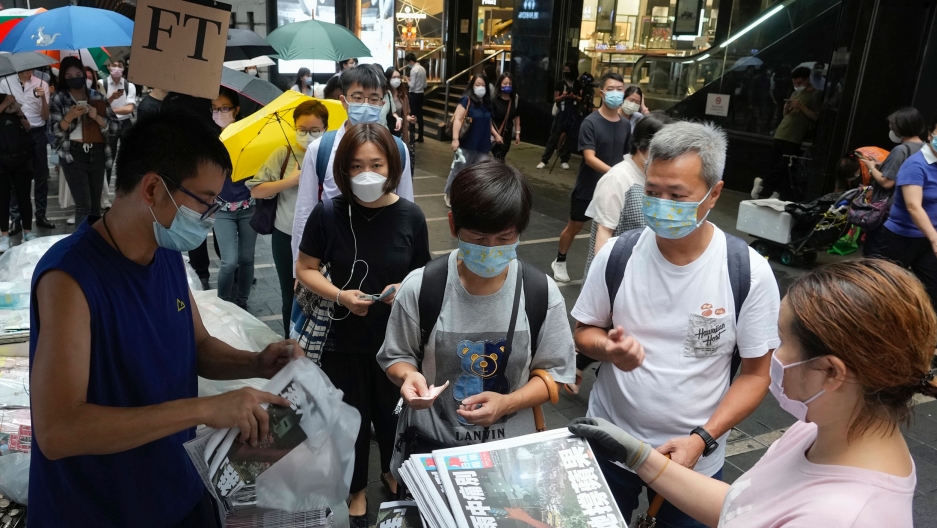 People queue up for last issue of Apple Daily at a newspaper booth at a downtown street in Hong Kong, June 24, 2021.

Marking another sign of China's tightening grip on Hong Kong, the final edition of the city's last remaining pro-democracy paper sold out in hours Thursday, as readers scooped up all 1 million copies of the Apple Daily.

Across the densely populated metropolis, people lined up early in the morning to buy the paper, which in recent years has become an increasingly outspoken critic of Chinese and Hong Kong authorities' efforts to limit the freedoms found here but not in mainland China. The paper was gone from newsstands by 8:30 a.m.

The newspaper said it was forced to cease operations after police froze $2.3 million of its assets, searched its office and arrested five top editors and executives last week, accusing them of foreign collusion to endanger national security.

"This is our last day, and last edition, does this reflect the reality that Hong Kong has started to lose its press freedom and freedom of speech?" an Apple Daily graphic designer, Dickson Ng, asked in comments to The Associated Press. "Why does it have to end up like this?"

The paper printed 1 million copies for its last edition — up from the usual 80,000. On the front page was splashed an image of an employee in the office waving at supporters surrounding the building, with the headline "Hong Kongers bid a painful farewell in the rain, 'We support Apple Daily.'"

While pro-democracy media outlets still exist online, it was the only print newspaper of its kind left in the city.

The pressure on the paper reflects a broader crackdown on Hong Kong's civil liberties, ramped up after massive antigovernment protests in 2019 unsettled authorities. In response, they imposed a sweeping national security law — used in the arrests of the newspaper employees — and revamped Hong Kong's election laws to keep opposition voices out of the legislature.

The result is that dissenting voices have been almost completely silenced in the city long known as an oasis of freedoms on mainland China's doorstep. The increasing restrictions have come despite China's promise to protect Hong Kong's civil liberties for 50 years after the city's 1997 handover from Britain.

The closure of Apple Daily raises the specter that other media outlets — though none as outspoken — will become even more cautious, such as the more than 100-year-old English-language South China Morning Post. The paper, while identified with the political and business mainstream, has thus far continued to report on controversial issues in Hong Kong and on mainland China, even after its owner, internet business titan Jack Ma, dropped from sight last year after publicly criticizing Chinese government policies.

"Without Apple Daily, Hong Kong is less free than it was a week ago. Apple Daily was an important voice, and it seems unlikely that any other media outlet will be able to fill its shoes, given growing restrictions on free speech and freedom of the press," he said.

Taiwan's Cabinet agency responsible for China issues also lamented the paper's closure as a heavy blow to media freedom in Hong Kong. The island is a self-governing democracy that split from mainland China in 1949 but that Beijing continues to claim as its territory.

"This shows the international community that the Chinese Communist Party, in its exercise of totalitarian political power, will stop at nothing to use extreme means to wipe out dissenting opinions," Taiwan's Mainland Affairs Council said in an emailed statement. "Humankind's quest for freedom, democracy and other universal values will not be lost to history, but history will remember the ugly face of the power behind the suppression of freedom."

Beijing has dismissed such criticism as interference in its internal affairs, and Foreign Ministry spokesperson Zhao Lijian on Thursday lashed out at foreign officials who have criticized the legal actions against Apple Daily.

"Press freedom is not an excuse of impunity and whoever disrupts Hong Kong has no extrajudicial privileges," Zhao told reporters at a daily briefing.

On Wednesday night, over 100 people stood outside Apple Daily's office building in the rain to show their support, taking photographs and shouting words of encouragement.

Inside the building, associate publisher Chan Pui-man told staff who gathered around the newsroom to big applause: "You've done a great job, everyone!" Chan was one of the five arrested last week.

In the early hours of Thursday, residents in the city's Mong Kok neighborhood in the working-class Kowloon district began lining up hours before the paper hit the stands.

Apple Daily's Hong Kong website contained only a notice on Thursday that read: "We are sad to inform you that Apple Daily and Next Magazine's web and app content will no longer be accessible at 23:59, 23 June 2021, HKT."

"We would like to thank all of our readers, subscribers, advertisers, and Hongkonger(s) for your loyal support," the notice read.

A similar message was posted on its news app.

In the wake of the announcement of the paper's closure, British Foreign Secretary Dominic Raab said authorities were using the national security law to curtail freedom and punish dissent, calling the paper's closure "a chilling demonstration of their campaign to silence all opposition voices."

German Foreign Ministry spokesperson Maria Adebahr said the closure was "another sign that pluralism, freedom of opinion and freedom of the press in Hong Kong are subject to erosion."

Last week's arrests of the Apple Daily employees represented the first time the national security law had been used against journalists for something they published.