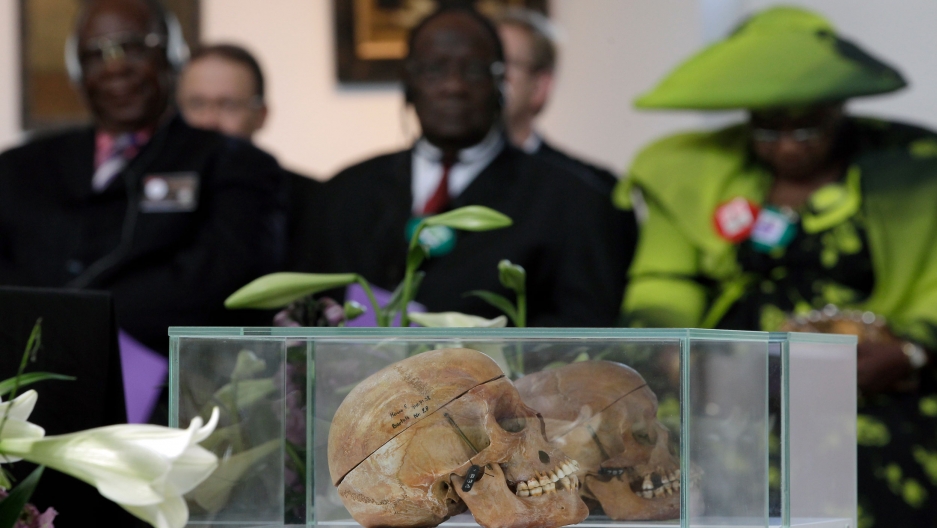 Skulls of Ovaherero and Nama people are displayed during a devotion attended by representatives of the tribes from Namibia in Berlin, Germany. Germany has reached an agreement with Namibia that will see it officially recognize as genocide the colonial-era killings of tens of thousands of people.

Germany-Namibia
Germany on Friday formally acknowledged that it committed genocide in the colonial-era killings of tens of thousands of people in Namibia. After five years of talks on the events that unfolded between 1904-1908, while Germany was a colonizer in Namibia, Foreign Minister Heiko Maas said Germany will offer financial support of $1.3 billion, largely on development projects, and has officially asked for forgiveness over the massacres.

Russia-Belarus
Moscow banned French and Austrian passenger airlines from flying over Russian airspace on Friday in an apparent retaliation over bans on European Union carriers entering Belarus’s airspace. French and Austrian carriers were seeking alternative routes to bypass Belarus. The Russia escalation follows European Union bans on Minsk after Belarus’ President Alexander Lukashenko’s diverting of a flight on Sunday to the capital, and the arrest of opposition activist and journalist Roman Protasevich.

AG Garland moves on hate crimes
US Attorney General Merrick Garland announced in a memo on Thursday new steps to combat the growing number of hate crimes in the US. Garland plans to expand funding, and offer additional resources to states for tracking and investigating hate crimes. The attorney general also created a new role in the Justice Department focused on hate crimes, coordinating with prosecutors and acting as a central “hub,” among other measures.

Lawsuits bring attention to caste discrimination in the US 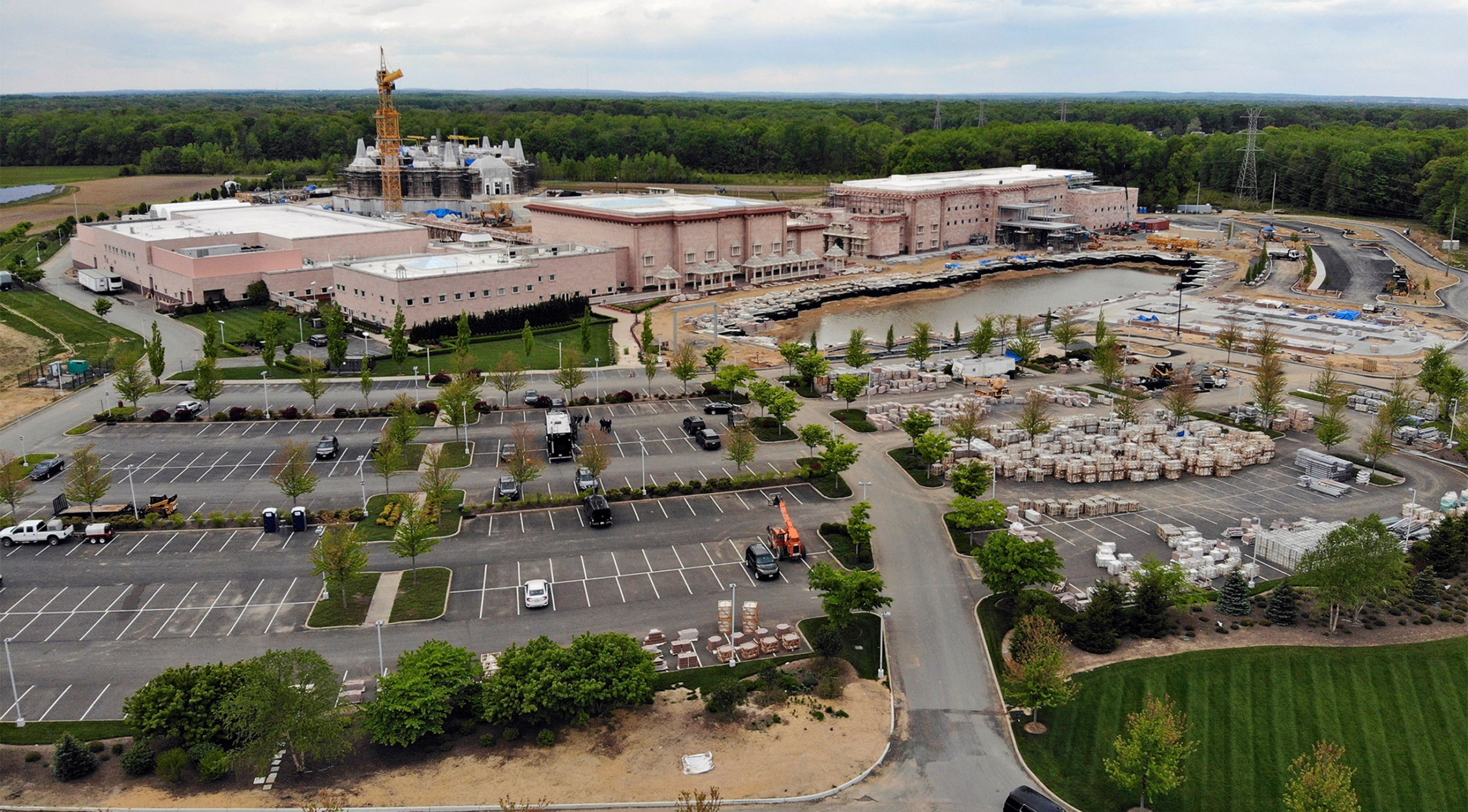 A view of the BAPS Shri Swaminarayan Mandir in Robbinsville Township, New Jersey. A lawsuit claims workers from marginalized communities in India were lured to New Jersey and forced to work more than 12 hours per day at slave wages to help build a Hindu temple, May 11, 2021.

People across the US are divided over whether caste should be added as a protected class under anti-discrimination policies. This month, lawyers representing lower-caste workers building a temple for a Hindu group in New Jersey filed a lawsuit claiming they were forced to work for less than $2 an hour. And in California, student leaders are pushing to pass resolutions recognizing caste as a protected category on their campuses. 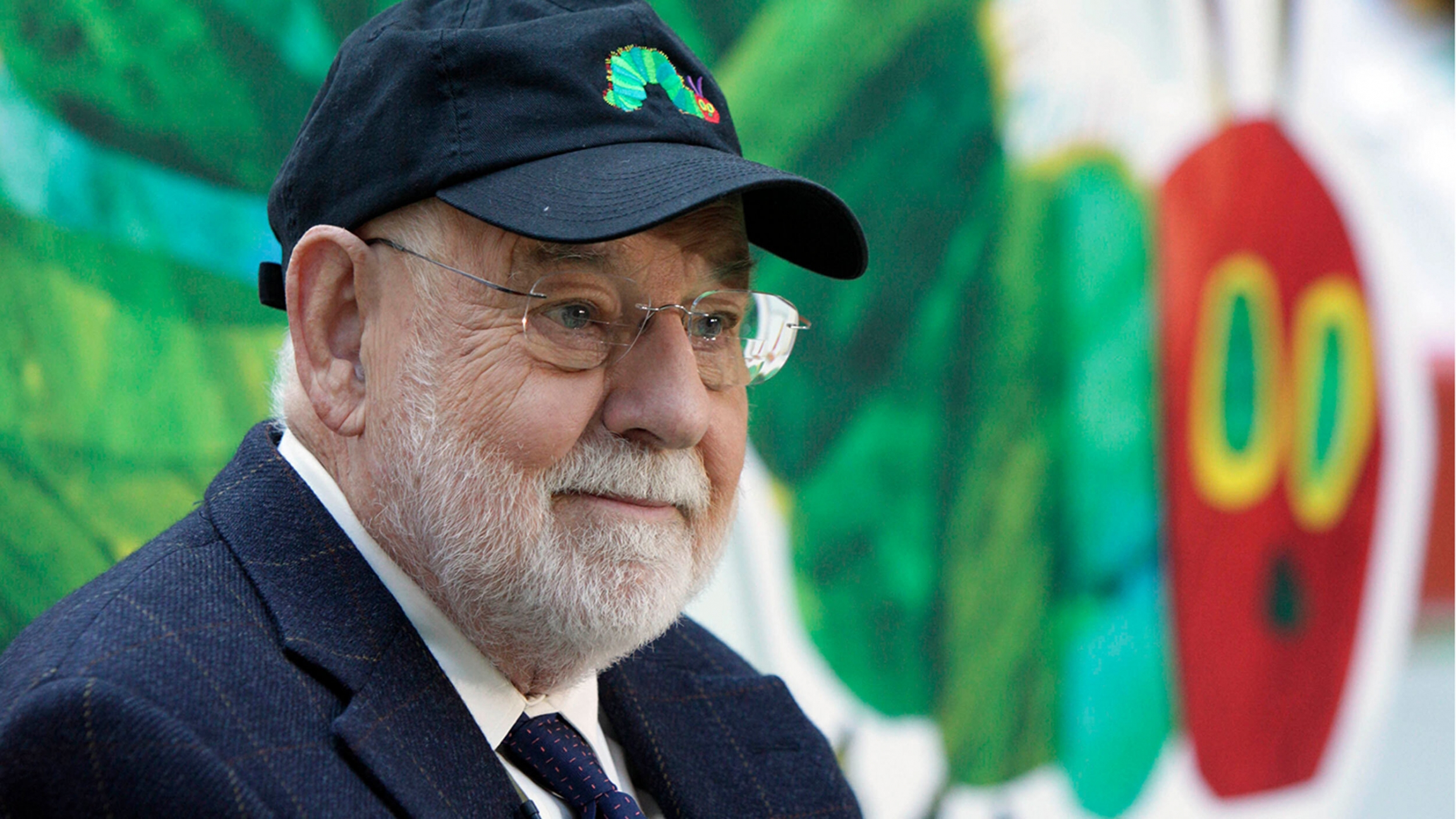 Eric Carle, author and illustrator of the children's book “The Very Hungry Caterpillar” and other works died on Sunday at the age of 91. Despite the joy evident in his work, his early life was marked by traumatic events. The World's Carol Hills spoke with Michelle Martin, Beverly Cleary professor for children and youth services at the University of Washington, about his life and work.

"Some of the reasons why he has so many books about small insects is that he says that his father taught him to look closely at things and really to pay attention" Martin said.

There may be hope in reversing deforestation. The Atlantic rainforest in eastern Brazil is providing a possible blueprint for what it takes to create a successful forest restoration program.

The Institute for Ecological Research has worked with conservation groups to plan regrowth in places that help connect the habitats of endangered species, allowing them to rebound — like the rare  black lion tamarin monkey. Learn more about this in our Big Fix segment. 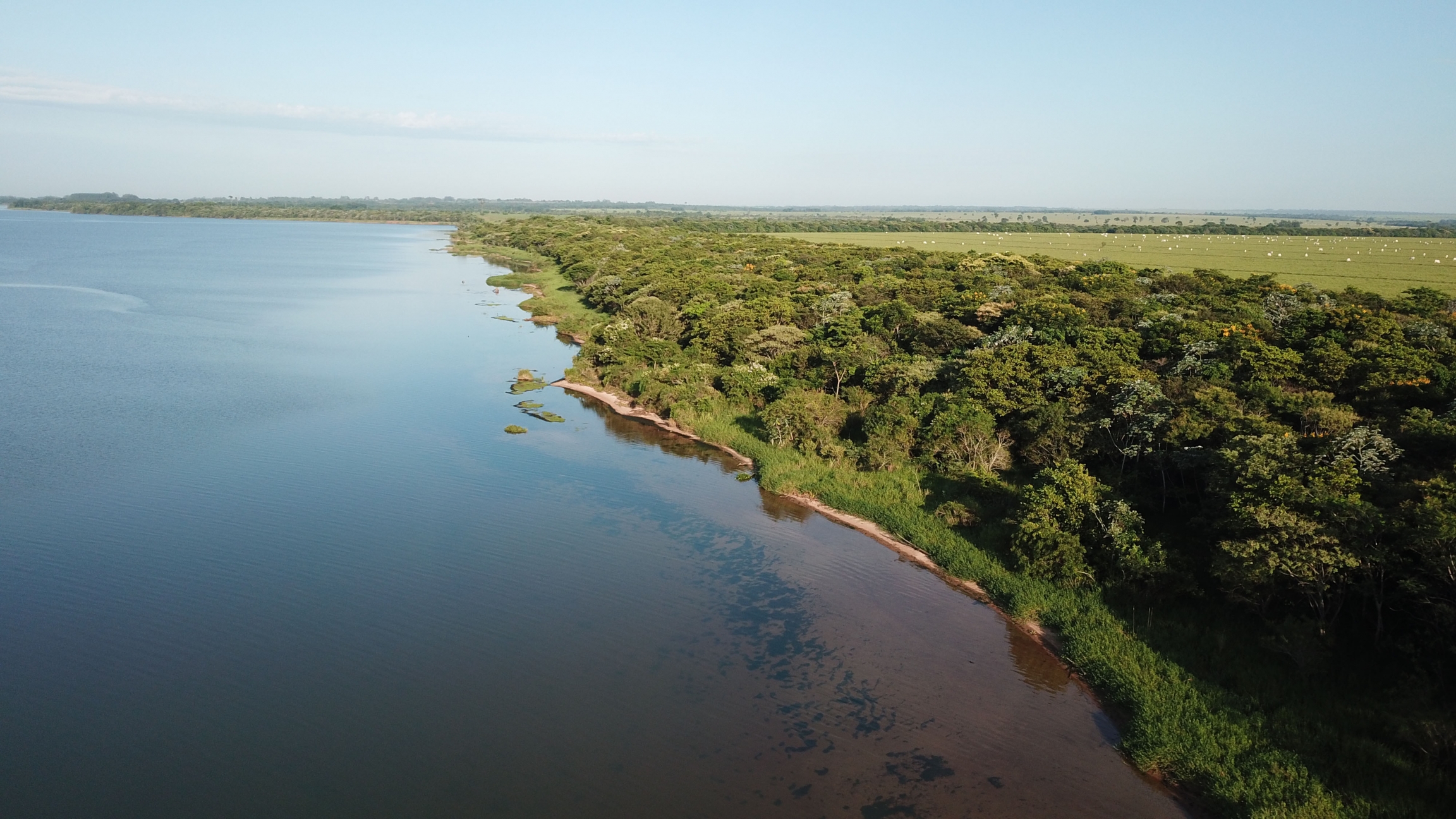 The Atlantic rainforest in Brazil is a beacon for global forest restoration. 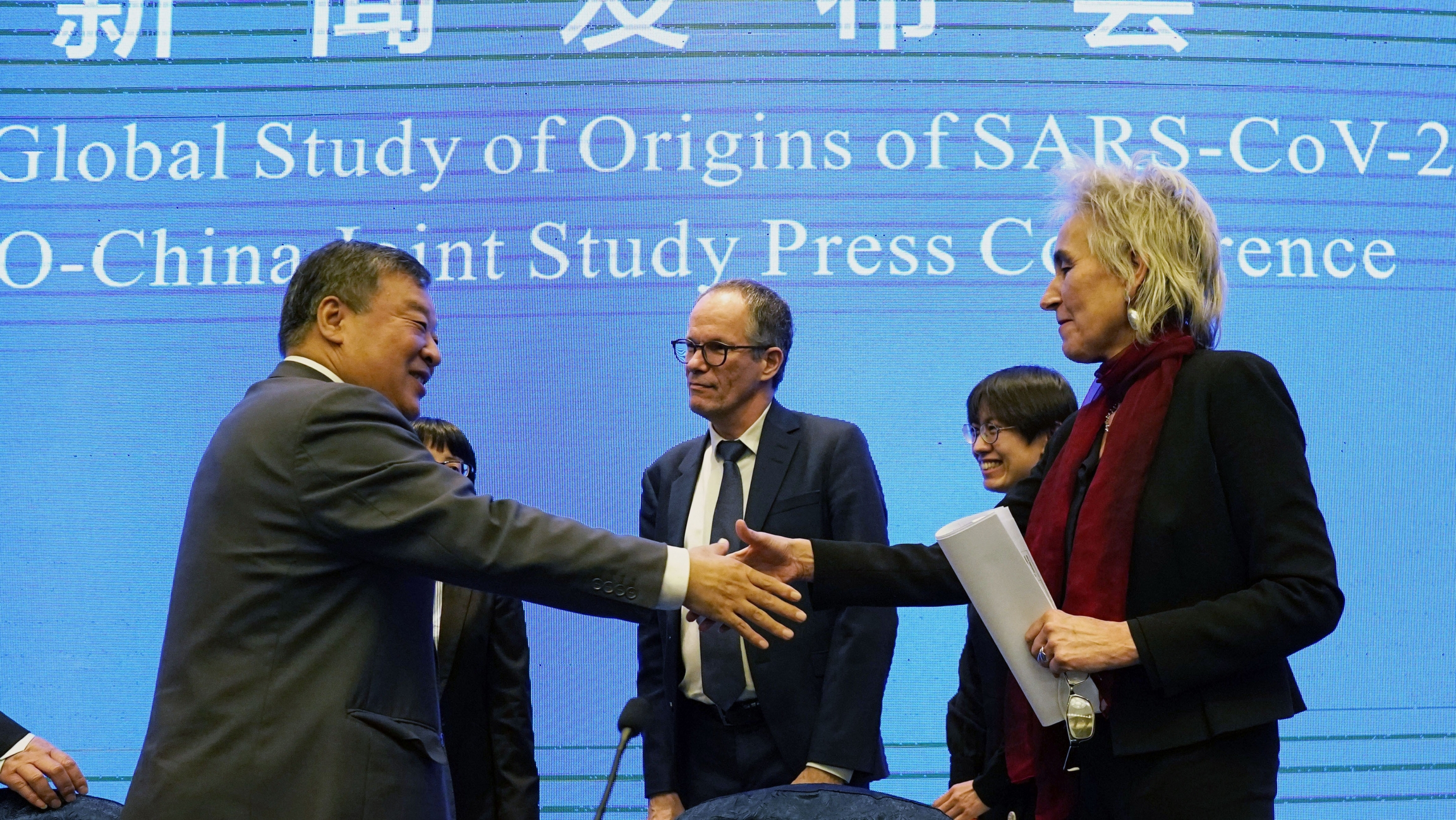 Marion Koopmans, right, and Peter Ben Embarek, center, of the World Health Organization team say farewell to their Chinese counterpart Liang Wannian, left, after a WHO-China Joint Study Press Conference at the end of the WHO mission in Wuhan, China, Feb. 9, 2021.

A group of prominent scientists in the field of virology are calling for an independent investigation to explore the origins of COVID-19. This week, protesters in Iraq took to the streets again to demand an end to a wave of assassinations and intimidation by Iran-supported militia groups. Also, the Biden administration has redesignated Temporary Protected Status — or TPS — to Haitians living in the US. And, The World remembers Eric Carle, beloved author of the famous children’s book, “The Very Hungry Caterpillar,” who died this week.