Shahin Hazamy was barely a teenager when he started filming the police with his iPhone back in 2010.

“Little by little, I started getting attention from people on social media,” said Hazamy, who was raised in the working-class Paris suburb of Cergy-Pontoise.

Today, the 25-year-old brands himself as a “ghetto journalist,” and has built a reputation for sharing videos of police violence on his popular Instagram page.

Related: A year after George Floyd’s murder, New Zealand reckons with its own police reform

“Police violence isn’t anything new, but the fact we can film it has put more power in the hands of citizens like us."

“Police violence isn’t anything new, but the fact we can film it has put more power in the hands of citizens like us,” Hazamy said.

One year after the death of George Floyd sent shockwaves around the world, there have been calls to reform France’s police force, amid accusations of racism and violence.

“Our phones are our only weapon to protect us."

“Our phones are our only weapon to protect us,” said Hazamy’s wife, Morgane, who works alongside her husband.

According to France’s national ombudsman, Black and Arab men are 20 times more likely to be randomly stopped by the police.

That’s why, Shahin Hazamy said, “the police shouldn’t be surprised if our first instinct is to start filming when they approach us. ... We are afraid.” 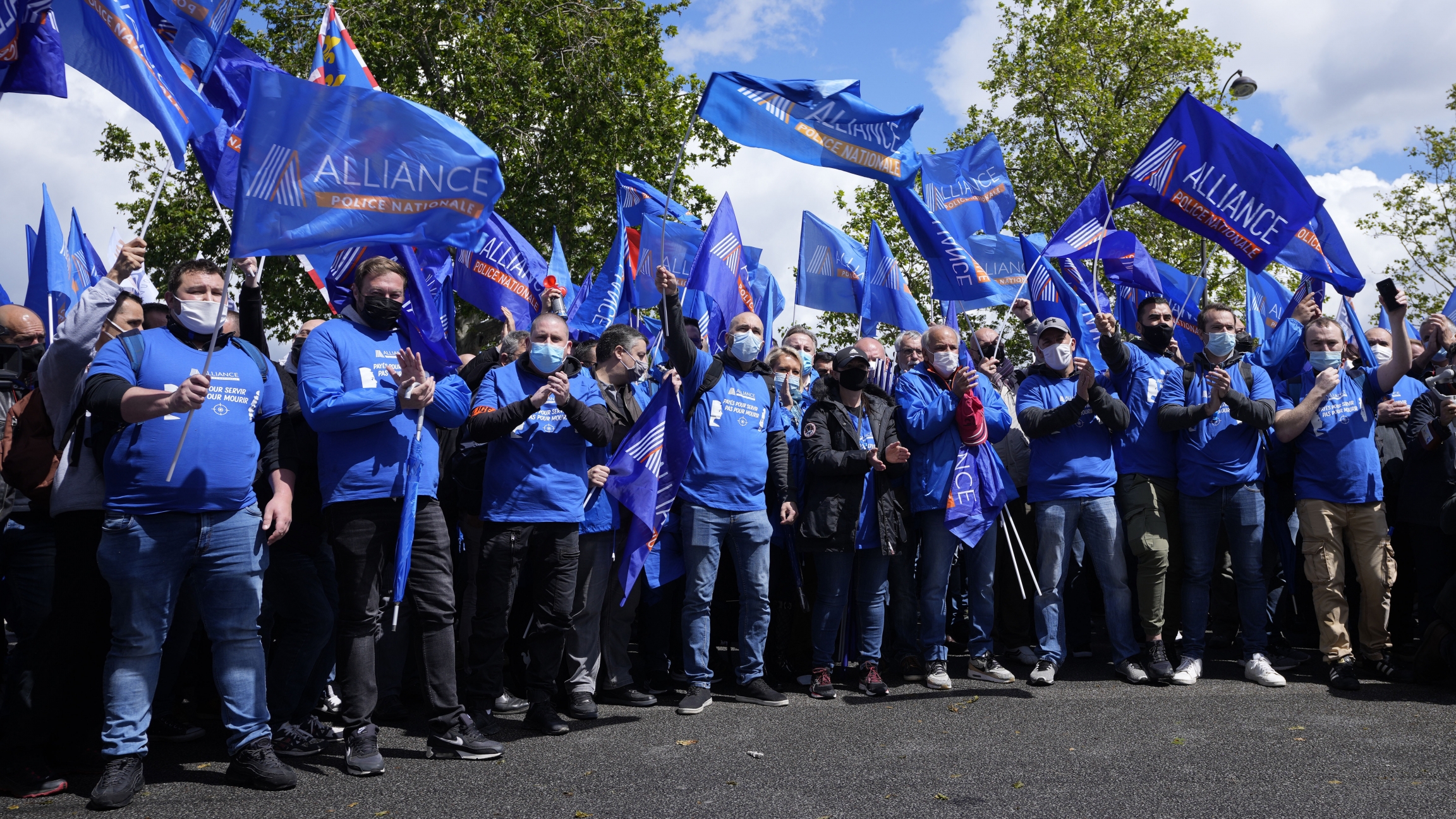 French police officers demonstrate sWednesday, May 19, 2021 in Paris. French police, feeling angry, vulnerable to attacks and useless, are holding an unusual demonstration Wednesday outside parliament to press for a law that protects the protectors.

But many police say they’re afraid, too.

Last week, thousands of police gathered in front of France’s National Assembly, calling for protection after the recent deaths of two officers.

According to France’s Interior Ministry, the number of police officers injured on duty has nearly doubled in the last 15 years — more than 6,000 were injured in 2019 alone.

Both sides say they need more support from the government, which has been caught walking a difficult tightrope in the run-up to next year’s presidential elections.

In a show of solidarity with the police, France’s Interior Minister Gérald Darmanin made an appearance at last week’s protest.

“There is nothing more normal than showing one’s support for the police in a republic,” Darmanin said during the demonstration.

Taking things a step further, Darmanin is also now suing a politician from an opposition party for defamation, after she criticized last week’s police protest.

When he entered the force in 1998, he remembers the police force doing more to focus on building bridges between officers and young kids — something he says has been cast aside over the years.

“Once Nicolas Sarkozy became president in 2007, he overhauled the system entirely. ... His argument was that the police should be less focused on sports and more focused on law and order.”

“Once Nicolas Sarkozy became president in 2007, he overhauled the system entirely,” Couvy said. “His argument was that the police should be less focused on sports and more focused on law and order.”

Couvy said that today, on the one hand, he can understand certain criticisms of policing tactics. But sharing videos on social media, like Shahin Hazamy does, can put officers in danger.

“I have no problem with someone filming a police intervention gone wrong,” Couvy said. "But when you share the face of an officer on social media, people go after them. My colleagues have received death threats ... there is something to be afraid of.”

Last year, lawmakers presented a bill that would require anyone sharing videos of police on social media to blur out their faces in order to protect the officers’ identities.

But earlier this month, the bill was ruled unconstitutional.

Related: Report: Police treatment of African Americans in the US amounts to crimes against humanity

Shahin Hazamy said if police officers behaved better, then maybe they wouldn’t need to be so worried about whether their faces are blurred or not.

“Maybe then we wouldn’t have to film them and denounce their racism and aggressive tactics,” Hazamy said.

The police union, meanwhile, insists systematic racism isn’t an issue in the force.

Differences aside, police and citizens agree that it’s the government that’s failing them.

Both sides say they need more support from those running the system.