On Thursday, the residents of the poor Jacarezinho favela in the north end of Rio de Janeiro woke up to the sound of gunshots.

All told, it was the deadliest Rio de Janeiro police operation — ever.

At least 25 people were killed, including one police officer; three people were injured and two passengers were hit by stray bullets on a passing train.

Civil police said they had prepared the raid for 10 months, with plans to arrest 21 members of a criminal gang accused of enticing children and adolescents into drug trafficking. They said they detained 10 people, followed all protocols, and didn’t celebrate the high death count.

For residents, the day was a nightmare. They want answers. The United Nations has also called for a prompt investigation. 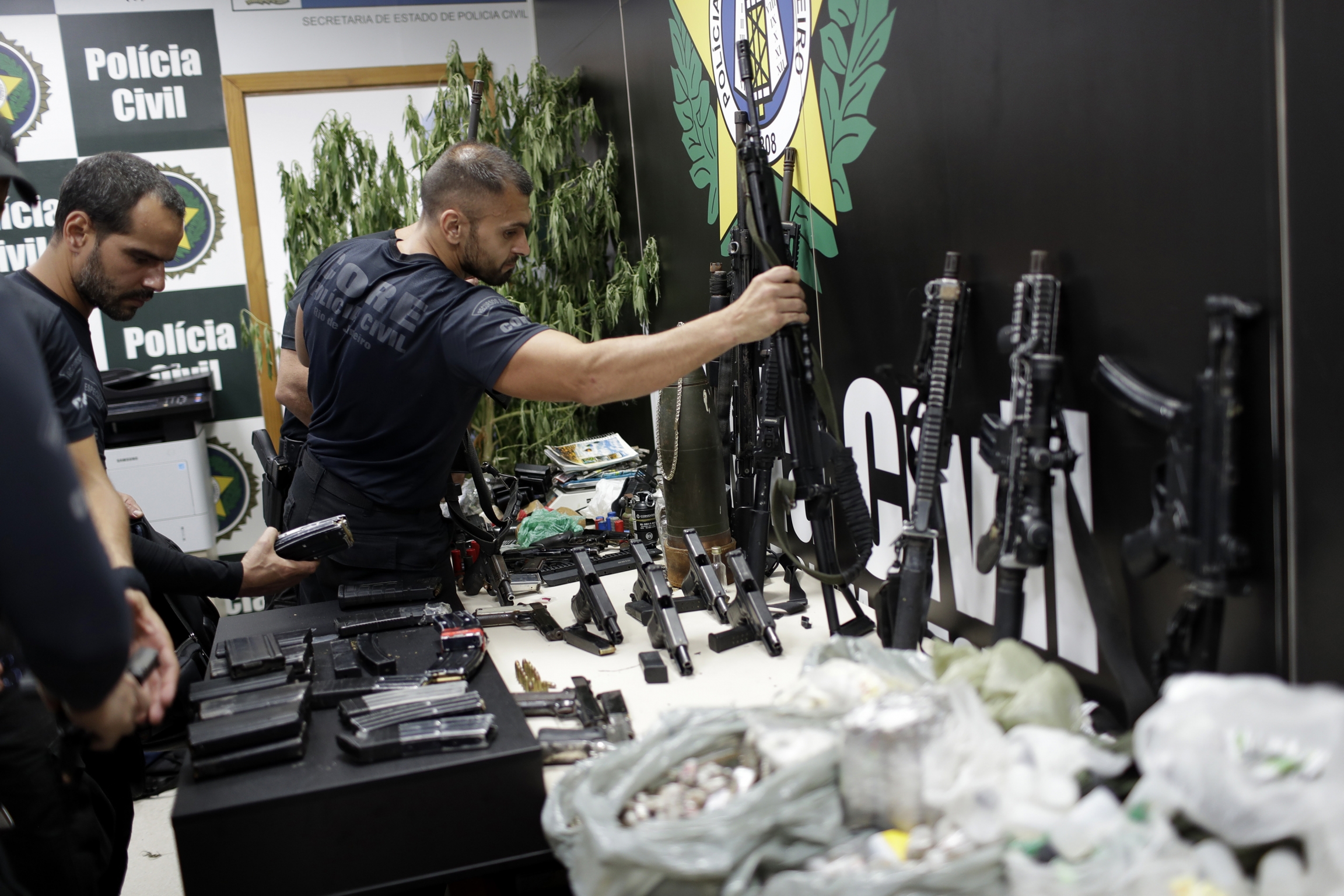 Weapons and drugs seized during a police raid are displayed for the press at city police headquarters in Rio de Janeiro, Brazil, May 6, 2021.

On Thursday morning, police helicopters hovered over the neighborhood.

“That’s a problem,” says a man off camera, in a video posted on Twitter by the local Jacarezinho media team Labjaca. “Those guys are shooting down on the neighborhood from up above.”

About 200 officers participated in the police raid.

“We are stuck inside, suffocating from the tear gas, and we can’t go out,” one resident posted on Twitter.

As the hours passed, the body count rose.

When the bullets stopped flying, residents poured out from their homes onto the streets in protest.

“Murderers!” dozens of young women shout in a video livestreamed over social media. They marched through the narrow streets of the neighborhood chanting: “Justice, justice, justice.”

“They pointed the gun at me and said I was going to die,” said a woman who said her son was killed. In a video shared online, women beside her keep repeating “killers, killers.”

‘This is a war scene’

“This is not democracy,” said Joel Luiz Costa, a lawyer who grew up in Jacarezinho, and who spent the afternoon witnessing the aftermath and collecting testimonies from residents.

In a Twitter video, he speaks to the camera, his eyes bloodshot from tears. “This is a war scene,” he said. “And we don’t deserve to live in a war scene. It’s not fair. What kind of a Mother’s Day are people going to have?”

Calls for investigations have echoed across the city, from local officials to members of the city’s public defenders.

"We had a slaughter in Jacarezinho today and it needs to be investigated.”

“We don’t have the death penalty in Brazil, and therefore it’s not up to the police [to] decide who should die and who should live in our society,” said Rio de Janeiro Legislative Assembly member Renata Souza, in an impassioned video over social media. “We had a slaughter in Jacarezinho today and it needs to be investigated.”

The Rio de Janeiro ombudsman’s office, which investigates human rights abuses in the city, was also on the scene.

“There’s a climate of fear, anxiety and huge sadness in the favela,” said director Guilherme Pimentel, at a press conference on Thursday evening. “What happened today was beyond the absurd. It’s really important to investigate what happened.” 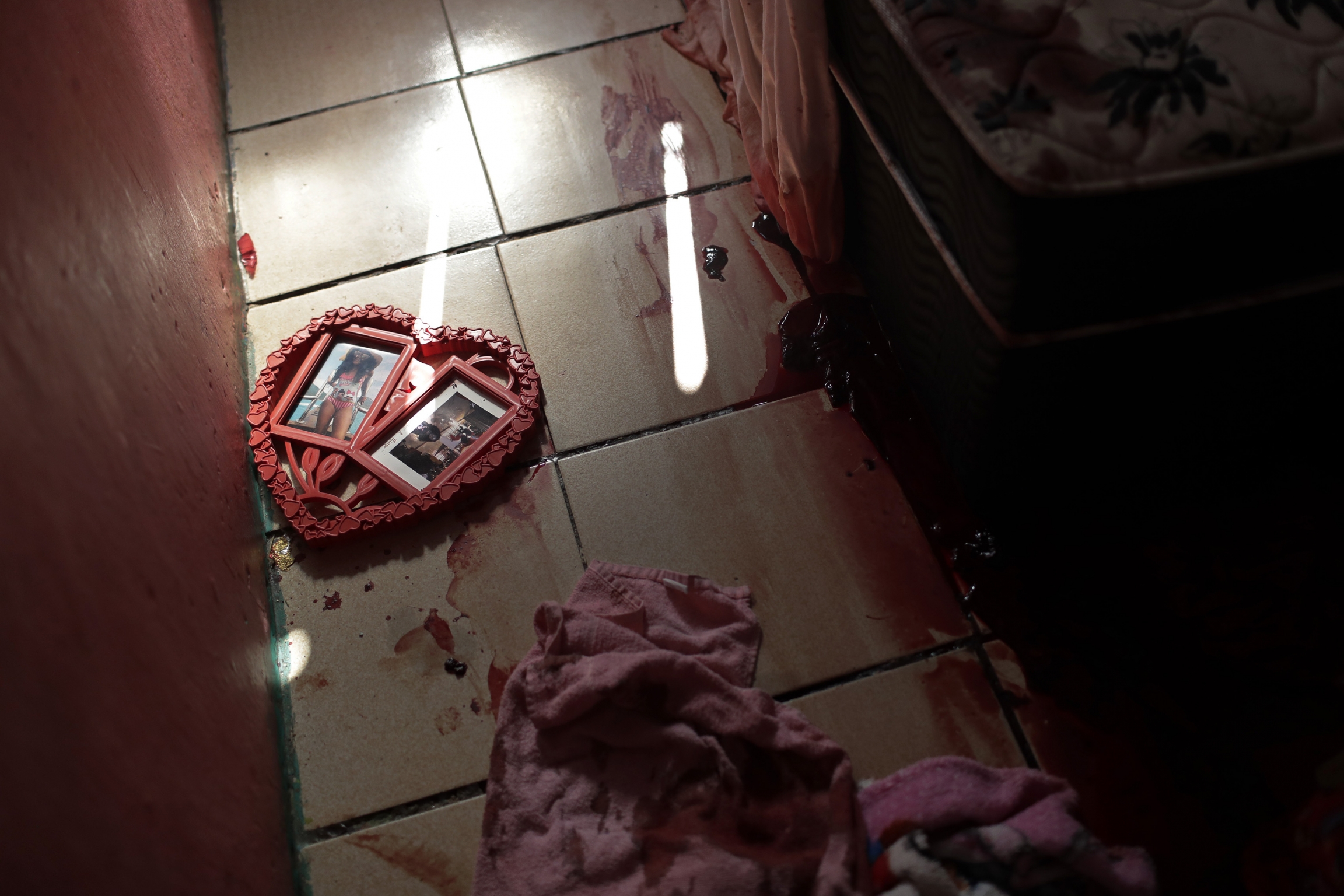 Blood covers the floor and a picture frame in a shape of a heart, inside a home during a police raid targeting drug traffickers in the Jacarezinho favela of Rio de Janeiro, Brazil, May 6, 2021.

A history of police violence

This was not the first violent police operation in Rio’s favelas. They’ve happened for years. According to the figures, police in Rio killed roughly 150 people each month in 2021.

But the police raids shouldn’t actually be taking place. Last June, due to the pandemic, Brazil’s Supreme Court banned all Rio de Janeiro police operations in poor communities, except in the most extreme circumstances.

The impact in the following months was unprecedented. Police killings dropped by 66%. The number of violent and nonviolent crimes also sank, according to a paper released last month by Jessie Bullock, a PhD candidate at Harvard University.

“In some ways, it’s actually surprising how effective it was initially in the first 90 days after the ruling, and the more time passes, we see the police gradually disrespect the ruling."

“In some ways, it’s actually surprising how effective it was initially in the first 90 days after the ruling, and the more time passes, we see the police gradually disrespect the ruling,” said Bullock.

She said that Rio’s police justify their violence as a necessary means for securing the city.

“They think the only way to fight trafficking and to decrease organized crime is with these types of operations, and fighting force with force,” she said. “This is even something that Bolsonaro himself campaigned on, the ‘fight force with force’ slogan.”

Police say they’ve done everything by the books. Critics say that — in a twisted way — that’s true.

“The police are acting totally normal. Totally normal. ... It’s so absurd. In April, there was a public hearing about police operations in the favelas. The same day there were raids in two different favelas.”

“The police are acting totally normal. Totally normal,” said Fabiana da Silva, who works with the Rio de Janeiro human rights ombudsman office and grew up in a favela in northern Rio de Janeiro. “It’s so absurd. In April, there was a public hearing about police operations in the favelas. The same day there were raids in two different favelas.”

Why, then, do violent police raids continue, despite the Supreme Court ban?

“It continues to happen because the rest of society sees no value in the lives of the people living in these communities,” said Silva. “So, the brutality is justified by the press as an exception, and not the rule.”

The Supreme Court has set a date for later this month to discuss the Rio de Janeiro police operations. Many hope the calls for investigations lead to action, and to accountability for this police raid, and the ones to come.