Her family was displaced, and they were living in a tent in Khan Sheikhoun, in northwestern Syria.

In the early hours of the morning on April 4, 2017, “We were sitting outside, and suddenly, we felt the smell,” Masoud recalled recently, speaking from a rehabilitation center in Turkey. “And I felt my heart sink. And I couldn’t breathe.”

“We went inside, closed the door,” she said. “But we could still smell the odor.”

Masoud, who later fled to Turkey with her family, said that thinking about that day makes her sad.

At least 89 people died and about 500 were injured in the chemical attack — one of at least 336 carried out during the civil war in Syria. A fact-finding mission from the Organization for the Prohibition of Chemical Weapons reported that “sarin or a sarin-like substance was used.” The United Nations found the Syrian government responsible for the attack.

Masoud and her family survived the chemical attack but she says the exposure to sarin, and possibly some other chemicals, had a lasting impact on her and her baby. She’s not alone — other women in Syria who were pregnant and endured chemical attacks have similar stories, but reporting on the issue is extremely limited in light of the war. Studies on the link between chemical attacks and deformities in babies and other health impacts are lacking.

But Masoud is certain that the chemical attack is to blame for what happened afterward. She was about a month into her pregnancy at the time and recalls gasping for air. Masoud fainted and was foaming at the mouth.

This wasn’t Masoud’s first pregnancy. She has two healthy daughters, Salam, 7, and Wiaam, 5. Both pregnancies went without complications. But this one, she said, felt different.

“The baby’s pulse was weak, and it wasn’t moving as much.”

“The baby’s pulse was weak, and it wasn’t moving as much,” she said.

Doctors confirmed her suspicion during an ultrasound. The baby’s limbs had not fully grown. When Fatema was born, her head was swollen “like a balloon,” Masoud said. And sure enough, her limbs had not developed.

“I felt like this is a test from God,” Masoud said before breaking down, crying.

“I think there are more cases similar to this,” said Hisham al-Saleh, manager of the National Syrian Project for Prosthetic Limbs, a nongovernmental organization in Turkey that was started by a group of Syrian doctors.

Saleh and his colleagues at a rehabilitation center in Turkey where Masoud brings her daughter said they have noticed at least three babies like Fatema in the past few months. The similarities are striking, they said: All three children’s mothers were pregnant at the time of the chemical attack in Khan Sheikhoun. Each child was born with similar deformities.

Saleh suspects there are more cases that are not reported.

“Some of them might be living in camps in Syria and might be in the same situation. We don’t know about them simply because they can’t reach centers like ours because of the ongoing war.”

“Some of them might be living in camps in Syria and might be in the same situation,” he said. “We don’t know about them simply because they can’t reach centers like ours because of the ongoing war.”

Most of the children don’t survive because of the severity of their deformities, Saleh said.

There is no comprehensive and scientific research that links birth defects in Syrian babies with exposure to chemical attacks, according to Dr. Sawsan Jabri, who used to teach pulmonary diseases at Damascus University and now lives in the US.

“The use of chemical weapons, in general, is internationally prohibited,” Jabri said. “So, we are not able to link or to find any scientific data that explain what’s going on.”

Jabri said it is difficult to conduct research in Syria due to the war and the Syrian government’s opposition to any research that might shed light on its atrocities. Lack of financial support is another reason, she added. 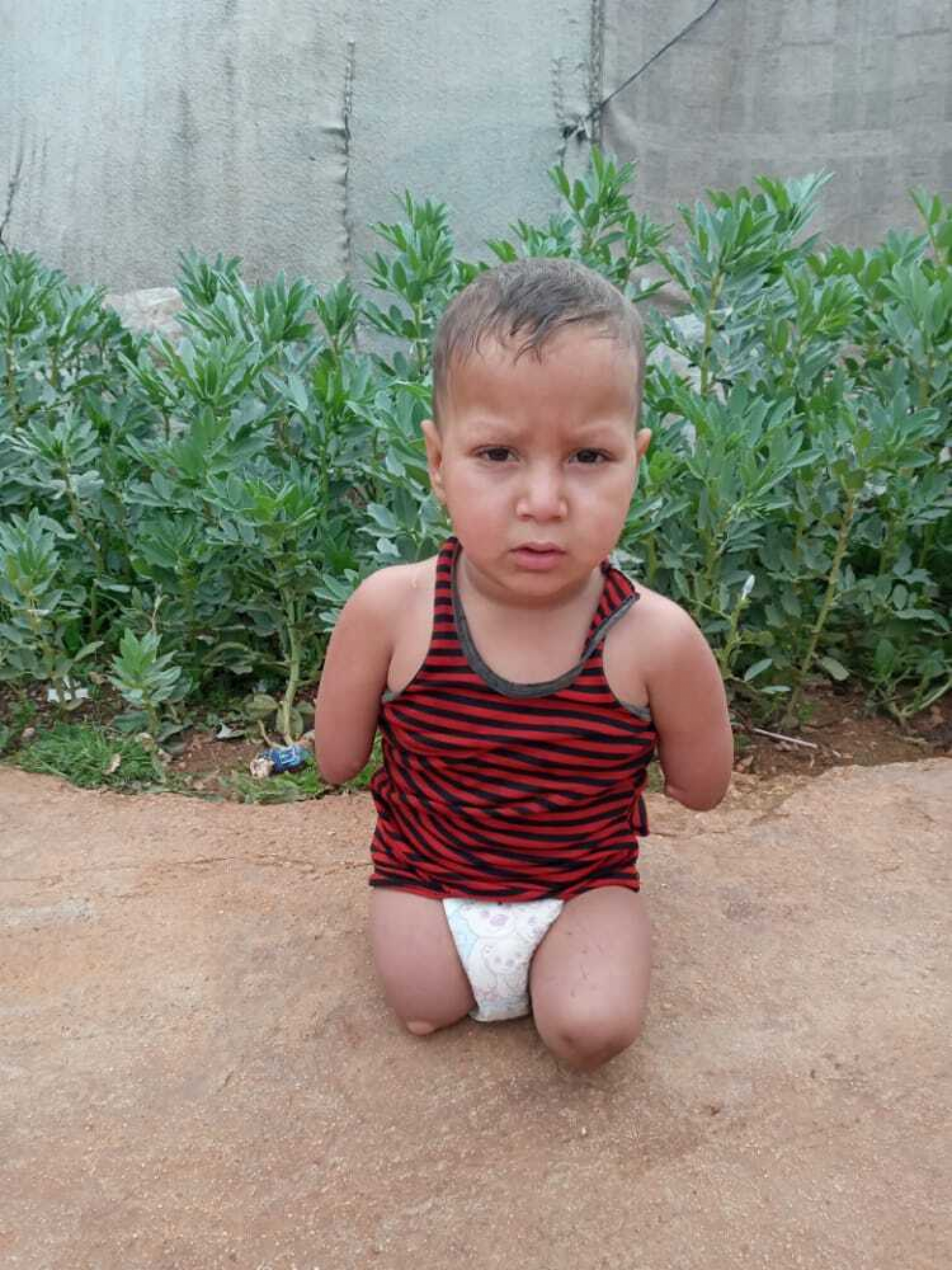 Four-year-old Assef al-Ablo, whose parents lived in the Khan Sheikhoun area in Syria, where the 2017 chemical attack took place, was born without limbs.  His father, Muhamed al-Abdo, believes the chemicals caused the deformities in his son.

Yet, in 2014, Jabri heard from a doctor who was living and working in the city of Moadamyah, in southern Syria. The city had come under a ferocious chemical attack the previous year.

“He saw a lot of miscarriages, stillbirths, birth defects among those who [were] exposed to the chemical attack,” Jabri said.

The two teamed up to conduct a small, observational study. They studied 211 pregnant women between September and November 2014. Out of the 211 women, 110 had previous exposure to chemical attacks and the rest were not exposed.

They published their findings in 2015 in the medical journal The Lancet: “There were 49 miscarriages (45%) in the exposed group (38 in the first trimester, 11 in the second trimester) compared with 14 (14%) in the non-exposed women. The usual proportion of known pregnancies ending in spontaneous miscarriage is 10–15%,” the report says.

“Yes, we have immediate effect, which is the massive death, the massacre that’s happened on that day, but still there were some kind of long-term consequences of the chemical attack.”

“Yes, we have immediate effect, which is the massive death, the massacre that’s happened on that day, but still there were some kind of long-term consequences of the chemical attack,” Jabri said.

Dr. Mohanad al-Khatib was a dentist in Syria and has reported similar findings. When the war began, he decided to volunteer at a field hospital. Khatib, who now lives in Turkey, said he personally helped deliver at least 13 babies with severe deformities in the span of one year after the chemical attack in Moadamyah.

“Doctors typically found out about the deformities when they did ultrasounds,” he said. “In most cases, the babies didn’t survive.”

Khatib shared three photos he took that showed newborns with severe birth defects. One had an arm growing out of its neck.

“This was so difficult to see,” Khatib said, “but there was so much death around us that we didn’t have time to digest what we witnessed.”

Masoud’s daughter Fatema, who survived the chemical attack in Khan Sheikhoun, is now 4 years old. The initial swelling of her head has subsided. But she still requires constant attention. For example, if Masoud puts her down even for a few seconds, she starts to cry.

Masoud and her husband, Zayed Ali Doaymes, said there are no other disabilities or deformities in their families. But Masoud’s sister, who also became pregnant around the time of the chemical attack, had a baby who died shortly after birth because she was missing bones, they said.

Fatema’s father says he has no doubt that the chemical attack in Khan Sheikhoun impacted her daughter’s health.

“I’m sure not a hundred percent, but a thousand percent [sure],” he said.

He wants the international community to investigate and bring those responsible to justice.

To Jabri, who conducted the small study on pregnant women, the testimonies of parents like Doaymes and Masoud are a wake-up call.

“I hope there will be more studies on the link between the chemical exposure and pregnancy outcome or consequences,” she said. “There must be more extensive studies on that issue.”

Sarin remains in the environment for a long time, so more information is needed to learn about what it’s possibly doing to the health of those who survived the attacks, she said.