Back home in Afghanistan, Rahima Yousefi was a security guard at a women’s prison. Today, she’s on the lookout for dangerous COVID-19 rumors circulating at the refugee camp where she’s waiting out her asylum application.

“Some people don’t believe in COVID-19. They say it is something fake, and there is no coronavirus. But I always tell them to take it seriously, put on their mask[s], and wash their hands.”

“Some people don’t believe in COVID-19. They say it is something fake, and there is no coronavirus. But I always tell them to take it seriously, put on their mask[s], and wash their hands,” Yousefi told The World through an interpreter in April, just outside the Lesbos tent site where she and more than 7,000 others live in close quarters.

Related: As Cyprus' leaders convene for peace talks in Geneva, some Cypriots say 'expectations are low'

Like most places around the world, conspiracy theories about the COVID-19 vaccine have been spreading here, too.

“My son … watched a video on Facebook that says that we should never do the vaccination for COVID-19 because it will make us mad — crazy,” she said, giggling at the absurdity of the claim.

Despite the false rumors, Yousefi and other asylum-seekers at the camp say they’re interested in getting vaccinated against COVID-19. But, for now, they and thousands of asylum-seekers who live in refugee camps across Greece, will have to wait. 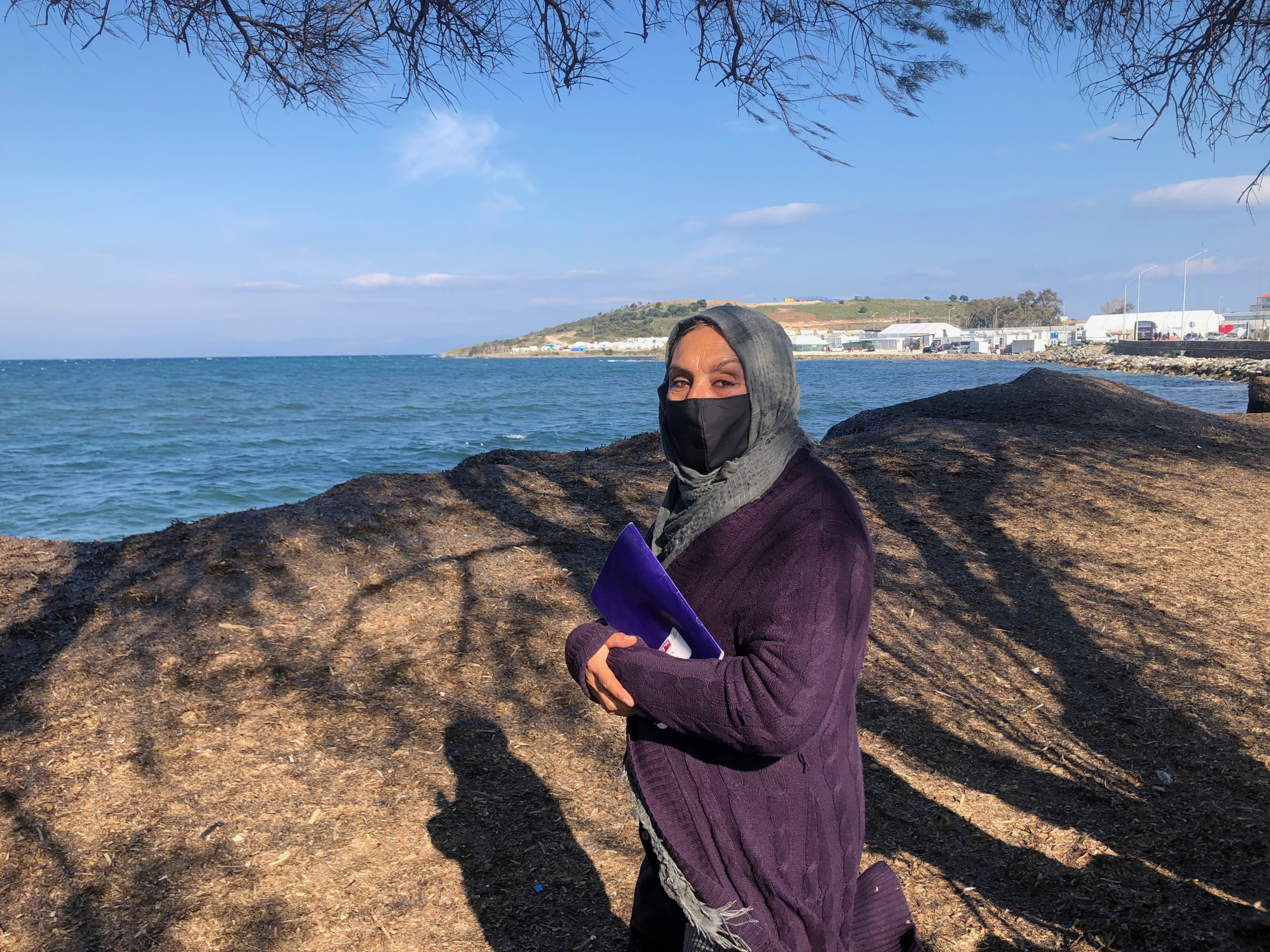 Rahima Yousefi, an Afghan asylum-seeker, has been debunking COVID-19 rumors at the refugee camp where she lives, on the Greek island of Lesbos.

Greek officials made assurances early on that the more than 35,000 people who live in refugee camps on the Greek islands and the mainland would be accommodated by the country’s vaccine rollout plan. But more than four months into the inoculation drive, and with approximately 10% of the nation’s population fully vaccinated, a plan for asylum-seekers has not been finalized.

Related: 'People are being abandoned in the middle of the sea': Claims that Greece pushes back migrants to Turkey are rising

Most European countries are vaccinating on the basis of presence on their territory, according to experts, but in Greece, access is tied to legal status. People need to have a social security number, known as AMKA, to sign up for the jab. After facing backlash for effectively shutting out of the vaccine program many immigrants and third-country nationals, the government said it would issue temporary social security numbers to those who qualify.

“There was that political decision early on from Greece to not make an issue of this — despite the generally quite alarming policies of the government on [migration] issues.”

“There was that political decision early on from Greece to not make an issue of this — despite the generally quite alarming policies of the government on [migration] issues,” said Catherine Woollard, director of the European Council on Refugees and Exiles (ECRE), a network of 107 nongovernmental organizations across Europe.

But institutional and practical difficulties, along with political considerations, “mean that it hasn't happened in practice,” she said.

“It’s a frustration... Public health is a state responsibility, and the state needs to take the initiative to reach everybody,” said Dr. Apostolos Veizis, executive director of INTERSOS, a nongovernmental organization that works with asylum-seekers in Greece and other European countries.

The United Nations, as well as activists and NGOs, have urged governments around the world to make COVID-19 vaccines available to asylum-seekers, refugees and other vulnerable populations.

The Greek migration minister, Notis Mitarakis, said in March that he saw “no reason” to expedite vaccinations for asylum-seekers.

“Data shows that the migration camps are not facing an issue of morbidity or spread of COVID-19, and thus, do not fall into any special category,” Mitarakis reportedly told state media.

Veizis, who’s a member of an advisory group working with the Greek Ministry of Health to coordinate a plan for asylum-seekers, says he’s been pushing to make asylum-seekers in camps a priority because their living conditions put them at greater risk of contracting the virus.

At dozens of refugee camps across Greece, social distancing can be difficult, if not impossible, and running water and personal protective equipment, such as masks, is scarce, he said.

Veizis said there is a proposal in the works that would allow officials to coordinate vaccine drives for asylum-seekers across Greece and give the jab to those who want it.

“It’s a good idea. When and how — that’s another question.”

“It’s a good idea. When and how — that’s another question,” he said.

Key ministries involved with the initiative, including the Greek Ministry of Health and the Ministry of Migration, did not respond to requests for comment on the timeline of the vaccine rollout for asylum-seekers.

Local media, citing unnamed officials, report that the vaccine drive for asylum-seekers will get underway in late May.

Meanwhile, the only asylum-seekers eligible for the vaccine are those who live in campsites located in popular tourist destinations. The Greek government is in the middle of an ambitious effort to vaccinate people on the Aegean islands as the country gears up to fully reopen to tourists in mid-May.

At the refugee camp on Leros island, where approximately 300 people live, authorities played a message over the camp’s loudspeaker recently, to inform residents they could sign up for the COVID-19 vaccine. But nobody registered.

Catharina Kahane with ECHO100PLUS, an NGO on Leros, said there had been no official campaign to get asylum-seekers educated on the vaccine.

“Basic information: What is the vaccine about? How does it work? What kinds of vaccines there are? Nobody told them,” Kahane said. “There is a huge lack of information.”

Kahane turned to a WhatsApp group and asked fellow NGO workers to send her vaccine information in Farsi, Arabic and Somali, the main languages that are spoken at the camp on Leros.

“We immediately used it. We printed it out and had folders and were walking through the camp and around the camp and gave it to people,” she said.

Some people were skeptical, Kahane said, but there was one argument for getting the vaccine that seemed to really resonate with asylum-seekers.

“I told them: ‘In the future, you won’t be able to travel without this. And it will exclude you from public life.’”

“I told them: ‘In the future, you won’t be able to travel without this. And it will exclude you from public life,’” she said, adding that many asylum-seekers want to leave the island and Greece once they’re granted refugee status.

Kahane is concerned about outreach when vaccines become more widely available for asylum-seekers in the country. Many are weary of trusting Greek authorities who are frequently accused of mistreating migrants.

According to a poll conducted by Greece’s National Organization for Public Health (EODY), 40% of asylum-seekers who responded said they were willing to get vaccinated against COVID-19. Greek officials reportedly plan to launch an awareness campaign, including through WhatsApp, a messaging app popular among asylum-seekers.

Experts say Greece may be lagging behind other European countries on vaccine distribution and outreach.

Varying degrees of inclusion around the world

“In terms of the vaccine, and the distribution and access to vaccines across Europe, the situation is actually better than expected,” Woollard, with ECRE said, adding that asylum-seekers in several countries have been able to access vaccines along with the general population.

In Germany, she said, “very quickly people who were being hosted, accommodated in centers, were vaccinated because there was an understanding that this was an environment where the risk of contagion existed.”

Serbia has started vaccinating the residents of migrant and refugee camps, where social distancing is a challenge. The Balkan nation had secured a range of Covid-19 vaccines, including China’s Sinopharm and Russia’s Sputnik V. pic.twitter.com/ai2KtMRj6G

Switzerland and Portugal are also providing vaccinations in migrant reception centers, according to the European Asylum Support Office, an EU agency.

Belgium, France and the Netherlands are among the countries issuing information on COVID-19 vaccines in several languages, while Switzerland has been running a television campaign in more than a dozen languages.

But across the world, millions of asylum-seekers and migrants have been excluded from COVID-19 vaccination schemes, according to a WHO review of more than 100 countries obtained by The Guardian newspaper.

Woollard and other activists and NGO workers are also concerned about other populations falling through the cracks, including the undocumented, internally displaced, and the Roma, Europe’s largest minority.