Iraqi photographer Yousif Al Shewaili, 21, sitting on a bench by Lesbos' main port in Mytilene, points to the spot where a boat carrying him and other migrants arrived in 2018.

“It was just a beautiful, beautiful moment,” he said.

Shewaili, who's now a recognized refugee, fled Baghdad and made the journey from Turkey to Greece in a dinghy along with dozens of other asylum-seekers.

Midjourney, the boat sprang a leak. Children were screaming, and Shewaili feared everyone aboard would drown.

“I couldn't help anyone. So, I put my face on my backpack, and I started crying.”

“I couldn't help anyone. So, I put my face on my backpack, and I started crying.”

Luckily, help came. The dinghy was spotted by the Greek Coast Guard, which took the migrants aboard their vessel and brought them to land.

This is how authorities are supposed to respond when they encounter people at sea — especially people in distress. 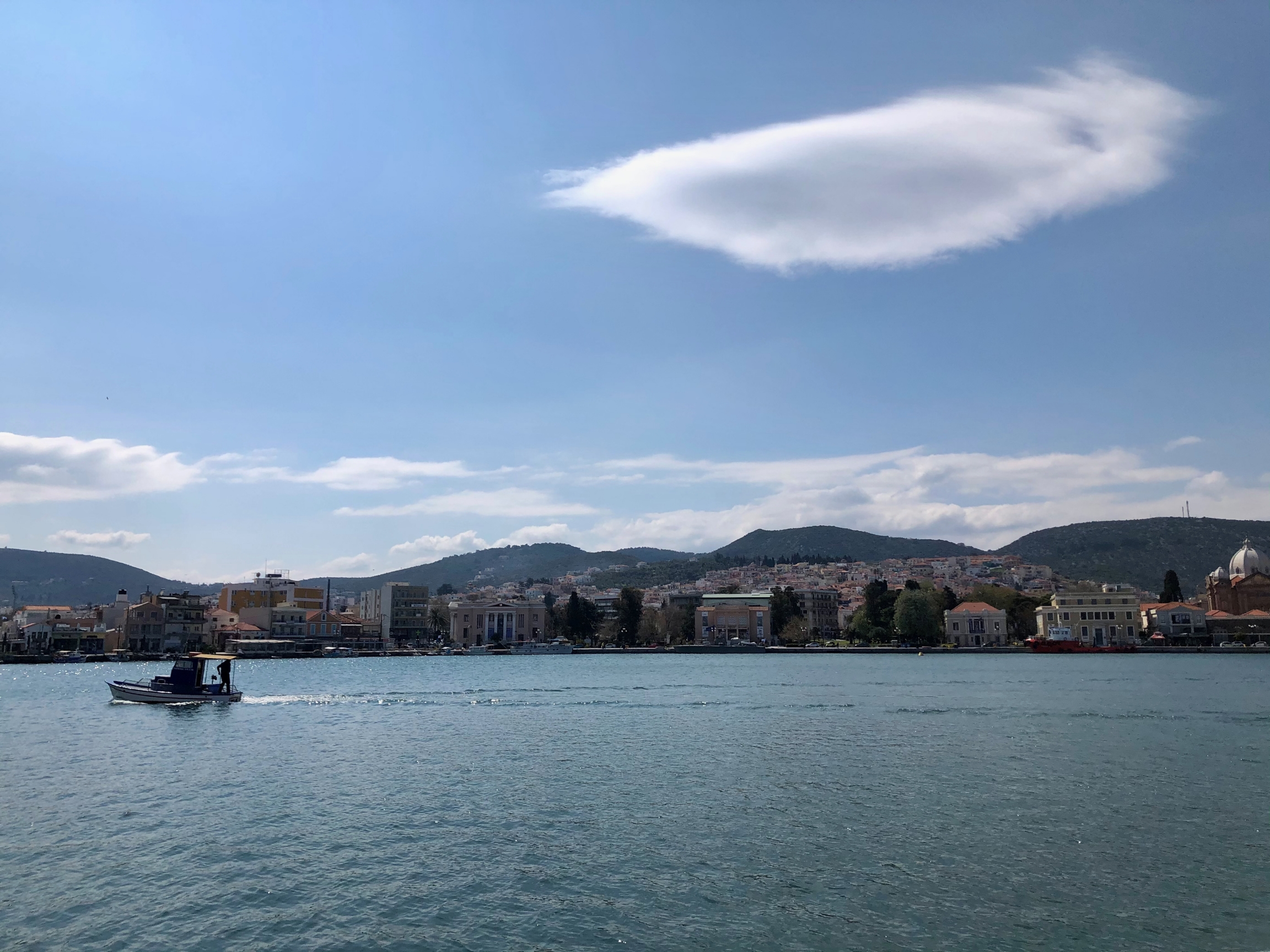 A boat is shown in the Aegean Sea from the port of Mytilene on the Greek island of Lesbos.

But increasingly, migrants and advocates claim, Greek authorities are illegally pushing back to Turkey people who are making the journey to Greece in the Aegean Sea. Greek authorities have strongly denied claims of pushbacks. Evidence and pressure, though, are mounting.

“What the Greek government is doing — and what we have documented them doing through testimonies, through evidence sent to us by survivors — is that people are being abandoned in the middle of the sea.”

“What the Greek government is doing — and what we have documented them doing through testimonies, through evidence sent to us by survivors — is that people are being abandoned in the middle of the sea,” said Lorraine Leete, coordinator for Legal Centre Lesvos, a nonprofit that’s documenting pushbacks and providing legal support to survivors.

In the last year, the organization has filed four cases with the European Court of Human Rights regarding pushbacks in the Aegean.

While some migrants describe being intercepted and turned back at sea, others claim they were forcefully removed once they made it to land, and put on boats back to Turkey. There are also reports of pushbacks on land along Greece’s northern border.

Allegations of pushbacks are not new. Organizations such as Aegean Boat Report have been tracking them for years.

But in the last year, “there has been an increase in the systemic practice of pushing people back,” Leete said, partly because of a failure to implement a deal between the European Union and Turkey.

Under the 2016 EU-Turkey deal, Turkey agreed to close its borders and stop asylum-seekers from coming into Europe in exchange for EU funds. Ankara also agreed to take back people whose asylum applications were rejected in Greece. But that’s not happening.

“As a result, we see that, unofficially, Greece has been stopping people from coming, has been pushing people back to Turkey because it cannot officially deport people,” Leete said.

‘Asylum is a human right’

“I never imagined this would happen here,” said Shewaili, the Iraqi refugee, who is now working on documenting pushbacks. “I never imagined that when they see people with life jackets, with nothing in their pockets in the middle of the sea, they [would] push them back and they leave them for dead.”

He worked as an interpreter for Legal Centre Lesvos, and more recently, has been tracking pushback cases on his own.

“It's just inhuman[e], illegal and a project of death.”

“It's just inhuman[e], illegal and a project of death,” he said of the practice. 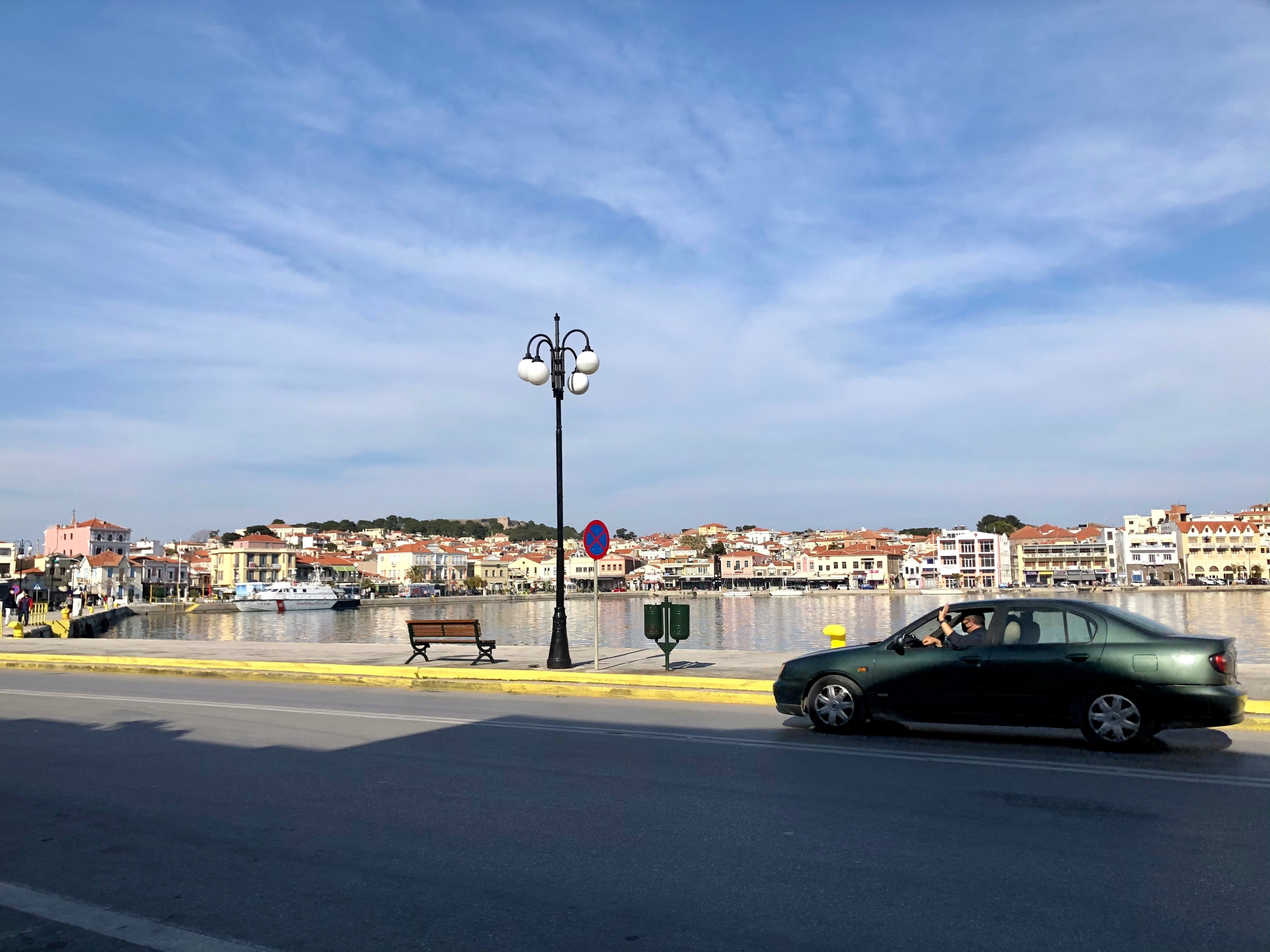 A car drives along the seaside near the port of Mytilene on Lesbos, Greece.

“The officers of the Hellenic Coast Guard who are responsible for guarding the Greek and European sea and land borders … [work] around the clock with efficiency, a high sense of responsibility, perfect professionalism, patriotism, and also with respect for everyone’s life and human rights,” the Hellenic Coast Guard said in a statement to The World.

In their email, they also alleged that the Hellenic Coast Guard has been “systematically and methodically” targeted by nongovernmental organizations and other organizations and that the vast majority of reports are based on unsubstantial reports and unreliable sources.

Related: The EU proposes certificates to ease travel during the pandemic. Not everyone is on board.

“We strongly deny that the Greek Coast Guard has [ever been] involved in pushbacks,” Greek Migration Minister Notis Mitarakis said at a press conference in March, where he also described reports of pushbacks as “fake news.”

There are also allegations that Frontex, the EU’s border agency, has been involved in illegal pushbacks of migrants.

An internal probe, whose findings were released in March and were widely criticized, found no substantial evidence linking Frontex to pushbacks. Other investigations, including one by a European Parliament committee, are ongoing.

Meanwhile, major humanitarian organizations, including the UN’s refugee agency, are sounding the alarm on the issue.

“The fact is that the frequency of reports is increasing. [That] deserves attention and mobilization by everyone.”

“The fact is that the frequency of reports is increasing,” said Mireille Girard, UNHCR’s representative in Greece. “[That] deserves attention and mobilization by everyone.”

Since the beginning of 2020, the agency has been looking into approximately 300 cases of reported pushbacks in Greece and passing along information it’s been able to verify to Greek authorities so they can conduct formal investigations.

One example is a case from mid-February, whose details UNHCR has been able to substantiate by speaking with witnesses and survivors and reviewing other evidence.

“What we know is that several families of Afghan nationals arrived on Lesbos,” Girard said. 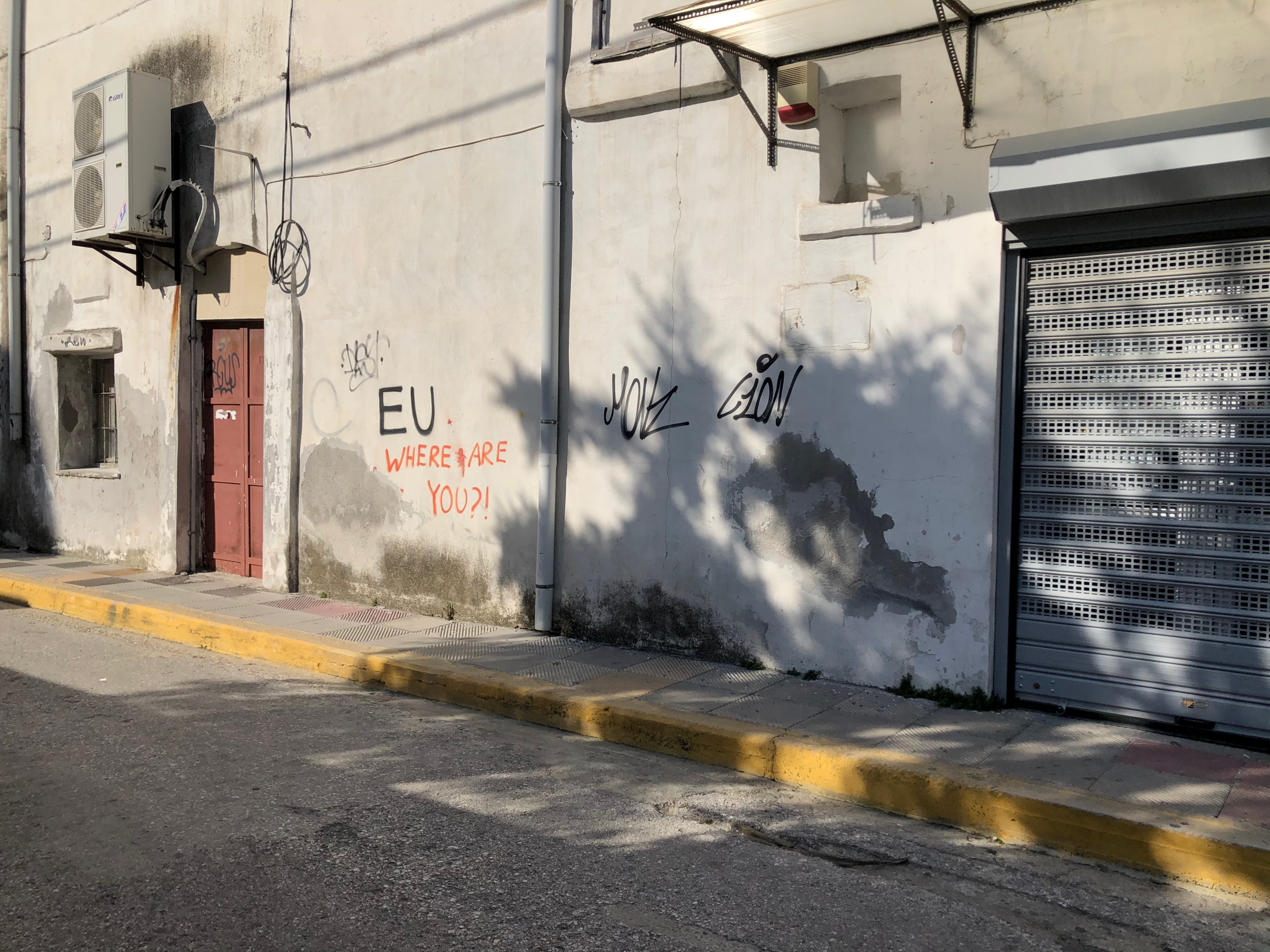 Graffiti sprayed on a building in Mytilene, Lesbos.

Thirteen people, including four children, presented themselves to the authorities and were put in a reception area with new arrivals. But overnight, they were forced into a van and driven to a port.

Once there, they were taken out to sea on a speedboat, put on a life raft without life jackets and left adrift. The people were later rescued by the Turkish Coast Guard.

“It's very important that Europe upholds the principle on which it's founded and its own asylum policy, meaning that people should be received with dignity at borders and they should have a chance to explain their claim if they're seeking protection,” Girard said.

“Asylum is a human right. It’s an imperative norm of human rights,” she added. “When there are indications that there may have been a pushback, this needs to be looked at very formally and seriously because this is illegal.”

“In cases [where] we receive written comments from actors like UNHCR, we do take them seriously,” Greek Migration Minister Mitarakis said at the March press conference, adding that there have been a number of independent investigations but that none of them have found authorities violating EU or international laws.

The EU’s top migration official, Home Affairs Commissioner Ylva Johansson, who sat beside Mitarakis at the press conference, said Greek authorities “can do more when it comes to investigating these alleged pushbacks and to clarify them.”

“You see this atmosphere, this climate of impunity … spreading.”

“You see this atmosphere, this climate of impunity … spreading,” said Tineke Strik, a member of the European Parliament from the Netherlands, with the Greens group.

Strik is on the parliamentary committee currently investigating Frontex’s role in pushbacks and other human rights violations.

Strik pointed to a recent statement by one of Europe’s top officials. During a visit to Greece last year, European Commission President Ursula von der Leyen thanked Greece “for being our European shield.”

Strik said she took the comment to mean: “You’re doing a good job because you keep the migrants out,” adding, “And as long as this is the message, member states feel free to go on with violations.”