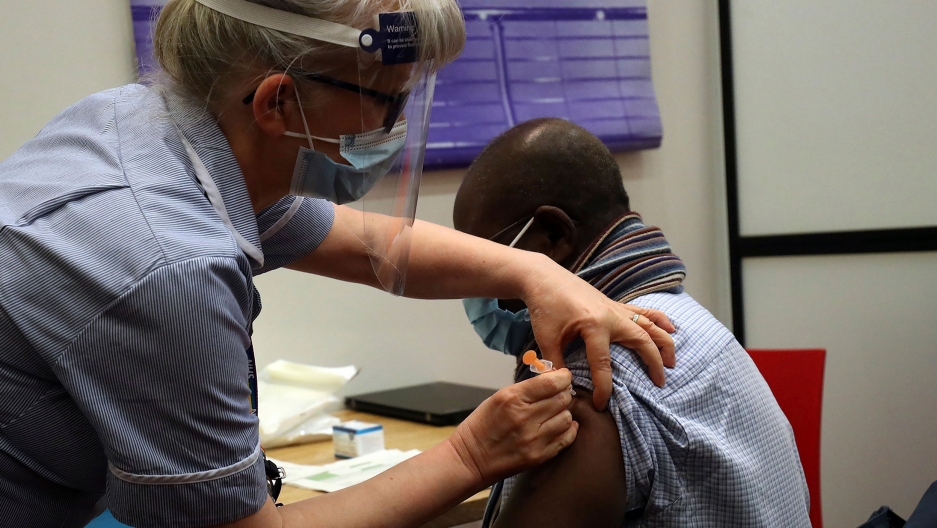 A man receives an injection of the AstraZeneca vaccine at the mass vaccination program in Newcastle Upon Tyne, England, Jan. 11, 2021.

The number of countries in Europe putting a halt to their rollout of the AstraZeneca coronavirus vaccine continues to grow. Even as countries across the European Union impose new restrictions to prevent the spread of COVID-19 and the bloc struggles with inoculation campaigns, Germany has joined France, Italy and Spain in suspending its use of AstraZeneca over concerns of blood clots in some recipients. The UK-based pharmaceutical company has said there is no evidence that the vaccine is to blame.

The World Health Organization is expected to meet on Tuesday to review the AstraZeneca jab but the group has also warned against halting use of the vaccine. Critics have raised additional concerns that an abundance of caution may further set the EU’s vaccination efforts back.

AstraZeneca is the least expensive of the three vaccines approved for use in Europe. And, it only requires refrigerator temperature so it can be stored for a couple of months. Health officials in Germany have called for further investigation into the blood clot cases. “Today’s decision is a purely precautionary measure,” said German politician Jens Spahn. 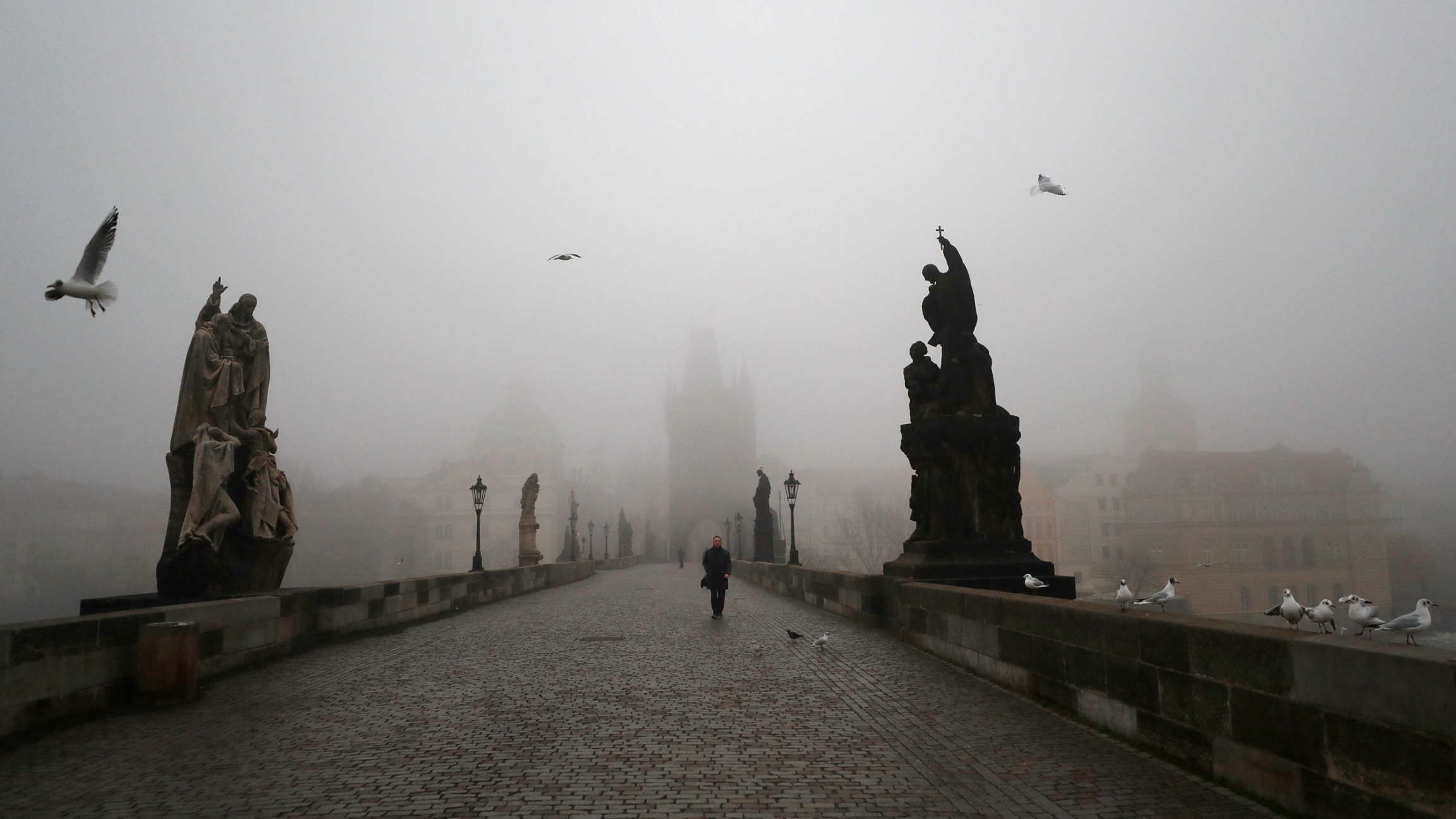 A man walks across the medieval Charles Bridge in Prague, Czech Republic, Feb. 24, 2021. The Czech government has decided to further tighten restrictive measures amid a surge of a highly contagious coronavirus variant in one of the hardest-hit European Union's nations.

A lot of experts still say the benefits of the AstraZeneca vaccine outweigh the risks. Dr. Barry Bloom, former dean of the Harvard T.H. Chan School of Public Health, told The World’s Marco Werman that the investigation to find a causal link between the AstraZeneca jab and blood clots will be challenging.

“The way WHO has dealt with it is you ask, 'What is the rate we know about heart attacks or strokes or suicide or thrombosis prior in those countries to there being the availability of a vaccine or COVID[-19]?'” Bloom said.

“And the answer is: 'It's very, very low.' And if 3 million people are vaccinated and only 22 got thrombosis, that turns out to be statistically in the same range that would happen if there were no vaccination in the same countries. That is not proof that the vaccine didn't do that. But it certainly is evidence that it hasn't raised the level of thrombosis greater than would be expected if there were no vaccine.”

With a rise in the number of migrants getting apprehended at the US-Mexico border, US President Joe Biden — once critical of Trump-era deterrence policies — is now facing criticism from all sides. Homeland Security Secretary Alejandro Mayorkas suggested the situation at the border is under control but migrants trying to reach the US — including a surge in children — is on pace to hit a 20-year peak. That leaves US border officials without adequate space to house migrants. The uptick in migrant arrivals, coinciding with ongoing challenges of the coronavirus pandemic, raises concerns about the possibility of infections. 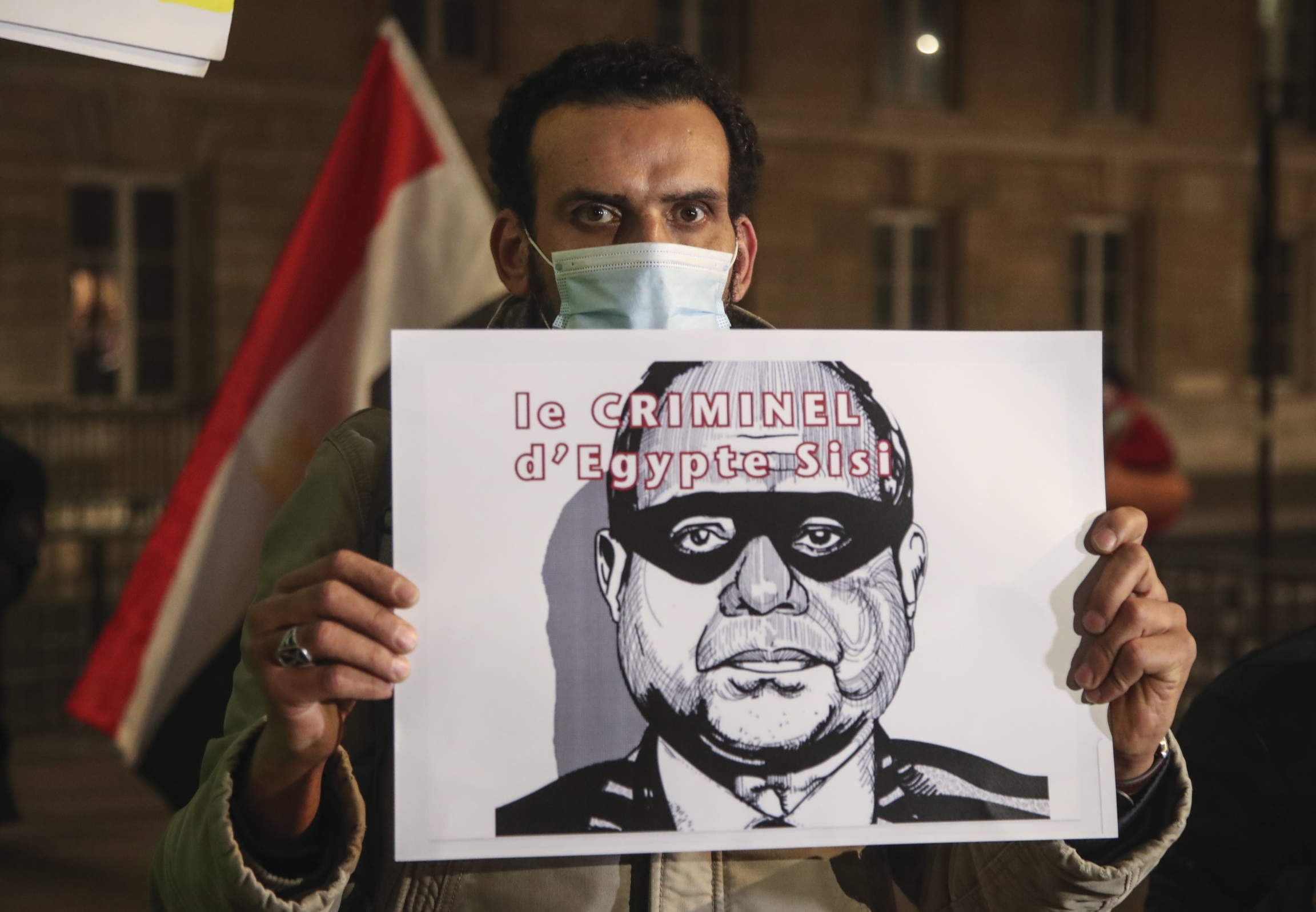 A man holds a placard depicting Egyptian President Abdul Fattah al-Sissi and reads he is a criminal as he stages a protest by the National Assembly in Paris, Dec. 8, 2020.

It was first time the UN council has weighed in on the situation in Egypt in seven years. And, it represented a policy shift by the US, which was among 31 countries that brought a resolution forward.

Until now, “I think there's been a reluctance to criticize Egypt publicly and collectively,” said Kevin Whelan, who represents Amnesty International at the UN in Geneva. But, “I think we're at a moment where the survival of the human rights community in Egypt is at stake.”

With Assad's firm grip on Syria, refugees in Lebanon hesitate to return 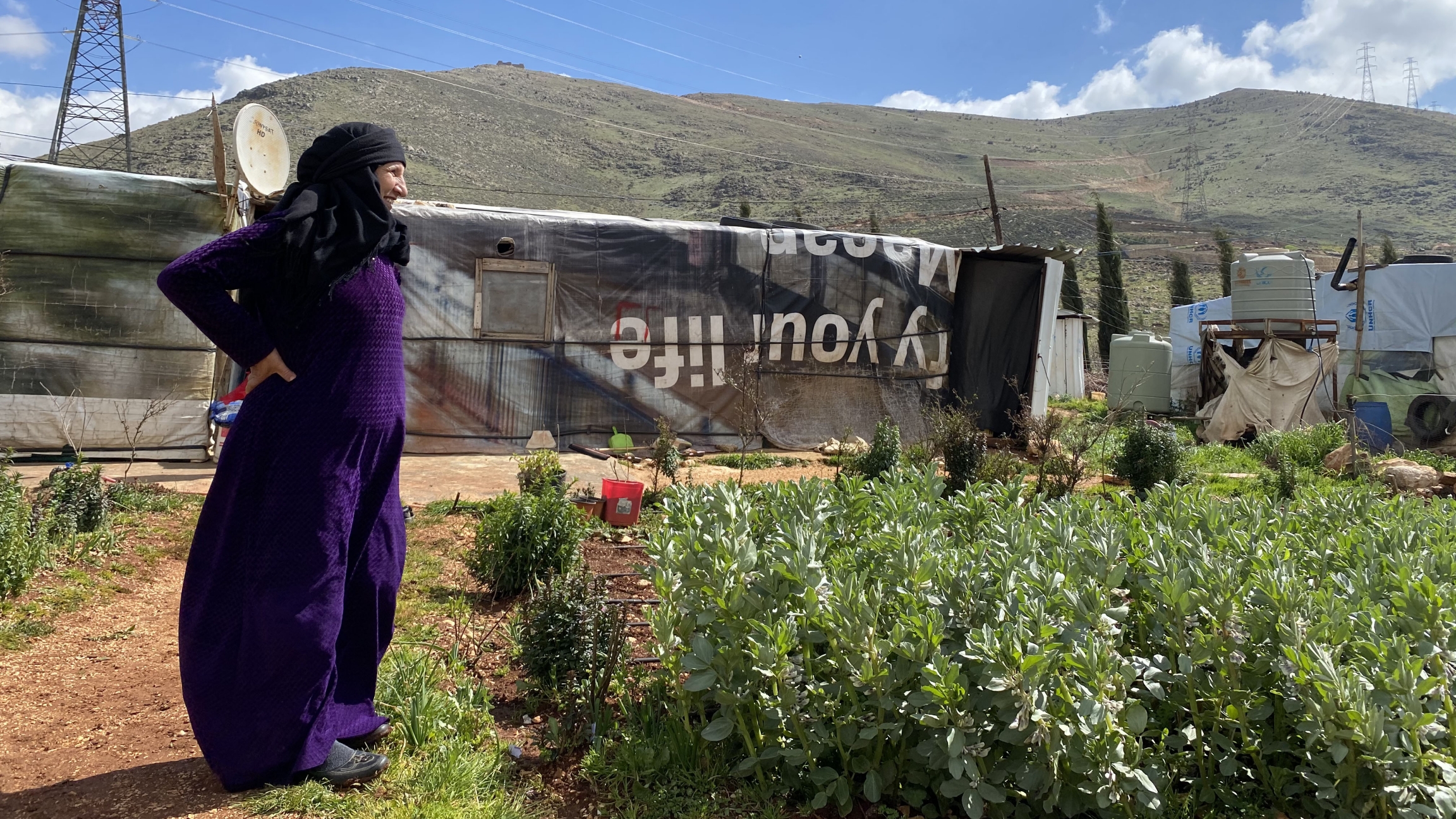 Bashil el-Ahmad stands next to her garden with the mountains behind her marking the Syrian border.

A decade after protesters took to the streets to oppose the Assad family’s rule, President Bashar al-Assad has retaken control of most of the country. But that doesn’t make it any easier to return.

If you happened to be on Valentia Island over the weekend off of Ireland's southwestern coast, you might have seen an unusual sight — an Artic walrus just sitting on the rocks. Alan Houlihan and his daughter spotted the animal and described its size as "astronomical." Many are asking how the large walrus made it so far from home. One theory is that the walrus might have fallen asleep on an iceberg and woke up in Ireland. But scientists suggest it's likely the walrus was in search of food or possibly new breeding grounds.

Listen: 10 years after the popular uprising that led to Syria’s civil war 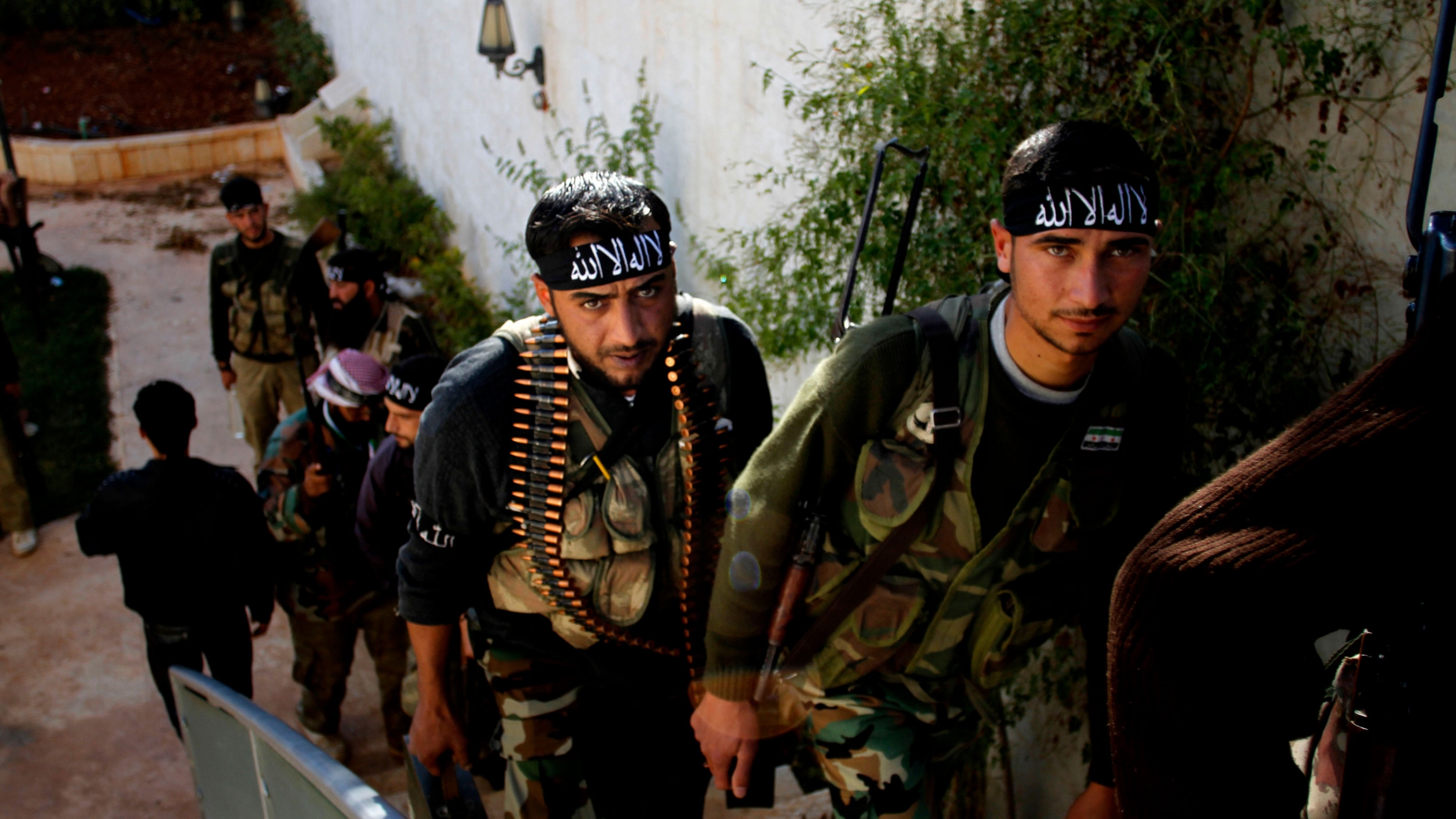 Syrian fighters of The Beloved of Allah brigade hold their weapons before fighting with government forces on the outskirts of Aleppo, November 2012.

As the Syrian revolution and civil war has played out over the last decade, up to 1 million Syrian refugees fled to Lebanon and many have stayed. And, Europe is facing a dangerous, new surge of COVID-19 cases, just as Italy, France and Germany suspend use of the AstraZeneca vaccine. The Grammys changed its category Best World Music Album to Best Global Music Album. What’s with the change in thinking?