From her tent, Bashil el-Ahmad can see the Syrian border — a mountain range about a mile into the distance — sloping down to the informal camp in the Lebanese town of Majdal Anjar where she lives with about 70 other Syrian families.

Kids play on the dirt roads between the tents. A few try out a makeshift seesaw made from a wooden beam balanced over cinder blocks. Most children here are too young to remember their country. Others were born in Lebanon and have never even been to Syria.

A decade after protesters took to the streets to oppose the Assad family’s rule, President Bashar al-Assad has retaken control of most of the country. But that doesn’t make it any easier to return. 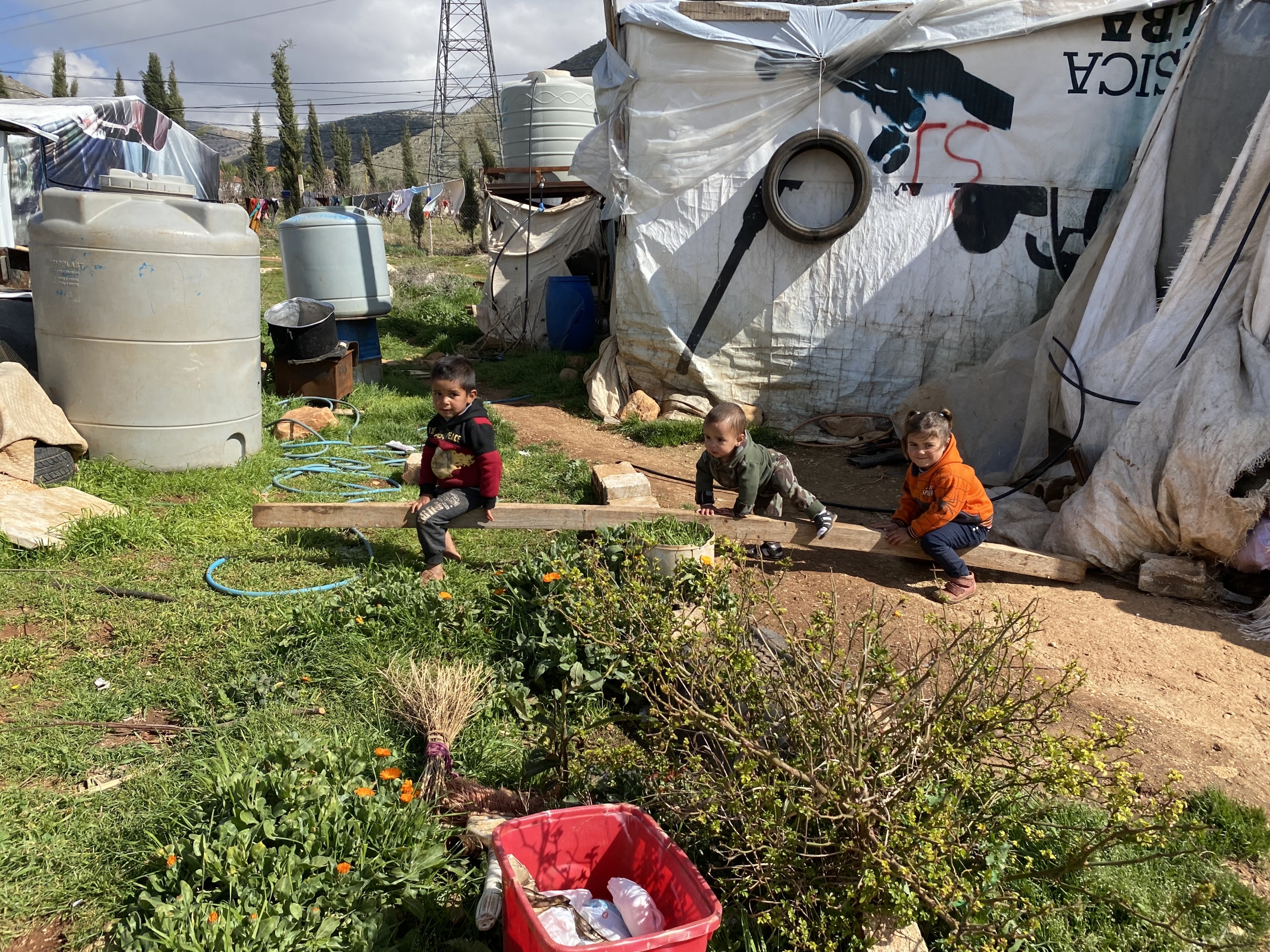 Kids play on a makeshift seesaw in an informal camp where 70 Syrian refugee families live near the Syrian border. The mountains behind mark the border with Syria.

Ahmad escaped seven years ago after a rocket hit her neighbor’s house, killing him.

More than 11 million people have been forced to flee their homes due to conflict in Syria, and more than a million have been pushed out of the country.

“I fled the bullets,” said Ahmad, who described them as “falling like rain” on her village.

She escaped with her husband and seven daughters. They first went to the Syrian city of Aleppo, and then to the Lebanese border.

“We couldn’t bring anything,” she said.

Like most Syrian refugees, Ahmad thought she would just escape the fighting for a few months, or maybe a year, but seven years later, she remains in Lebanon. She can see the Syrian border — but she can’t return home.

Instead, she lives in a home made of plastic sheets stretched over wooden beams. Old car tires help hold down the roof.

Ahmad lit up as she described her house in Syria, with several bedrooms, a living room, a kitchen and two bathrooms. It was made of concrete, she said. Her husband had a job and her daughters went to school. 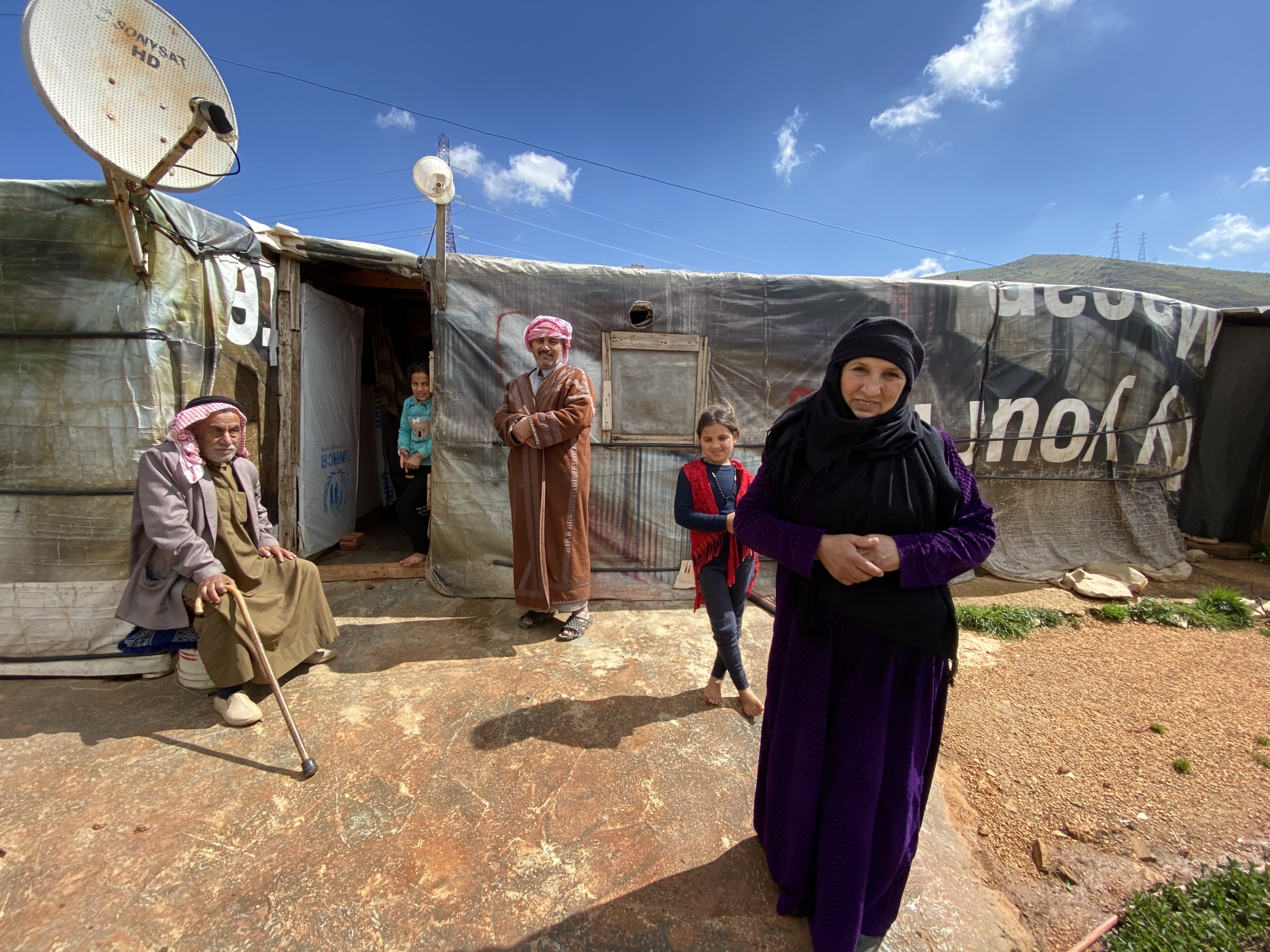 Bashil el-Ahmad in front of her tent with her family. The mountains behind mark the Syrian border.

Not long after she left Syria, her sister sent her a photo of their home.

“There was nothing left,” she said.

Even the olive trees had been cut down.

A few tents away, Ali Hamoud describes his own escape from Syria. He, his wife and their seven children were smuggled over the mountain range under the cover of darkness. Like Ahmad, his house was destroyed, and he came with nothing to Lebanon.

“When things settle down I will go back."

“When things settle down I will go back,” Hamoud said. 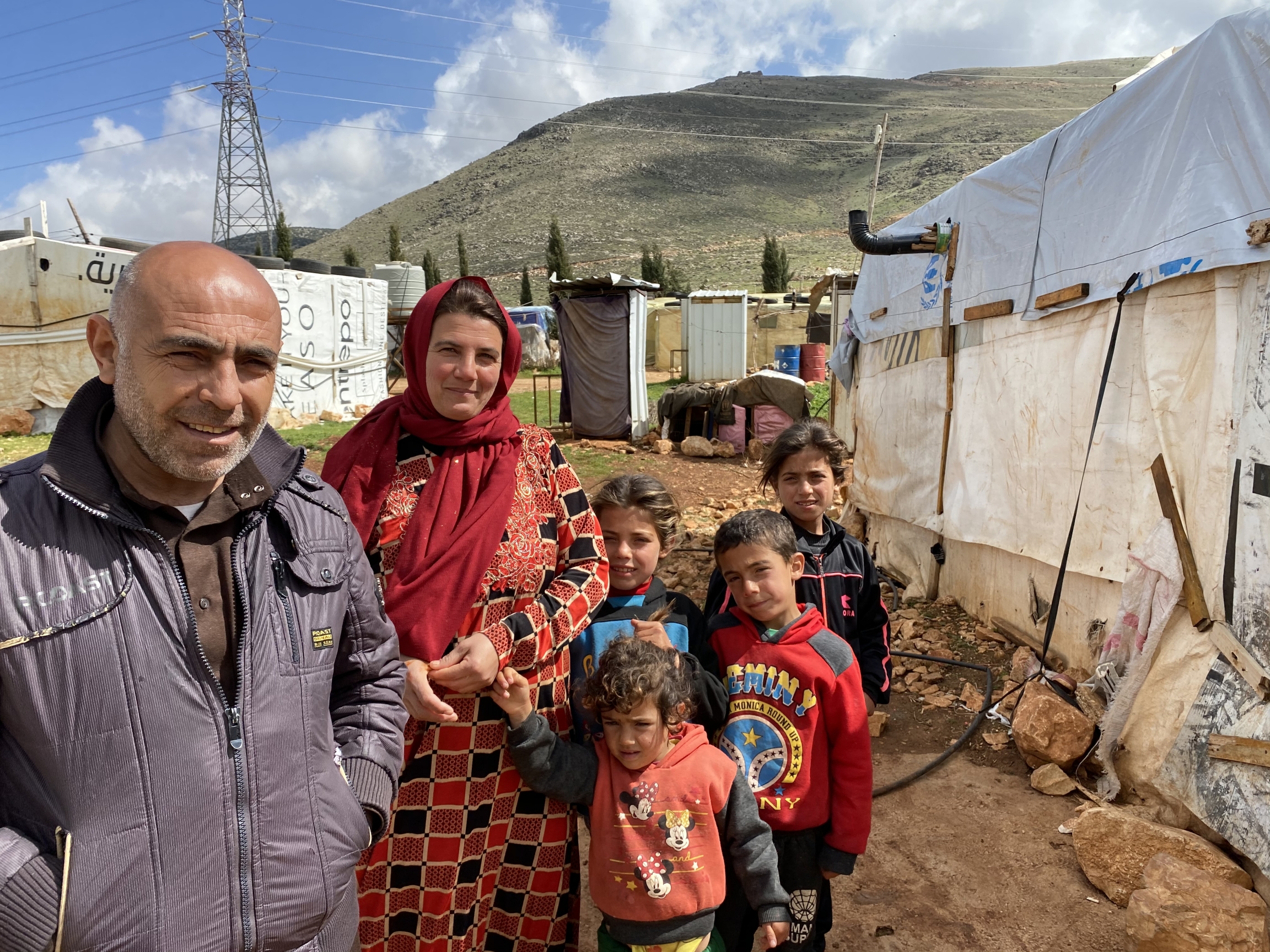 Ali Hamoud stands in front of his tent with his family. The mountains behind mark the Syrian border.

The fighting in Syria has settled down — including in Hamoud’s village. But Hamoud said militias still run rampant, and his oldest son could be conscripted into the Syrian army if they return. Also, his home is still in ruins, and he doesn’t know how he would get the funds to rebuild it.

“There are some people that are living for the hope they will go back to Syria, and there are people who say, ‘No way I will go back to my home,’” said Khaled Abou Haykal, a project manager with Basmeh and Zeitooneh, an organization that provides food, shelter and other assistance both to Syrian refugees and the local Lebanese community. 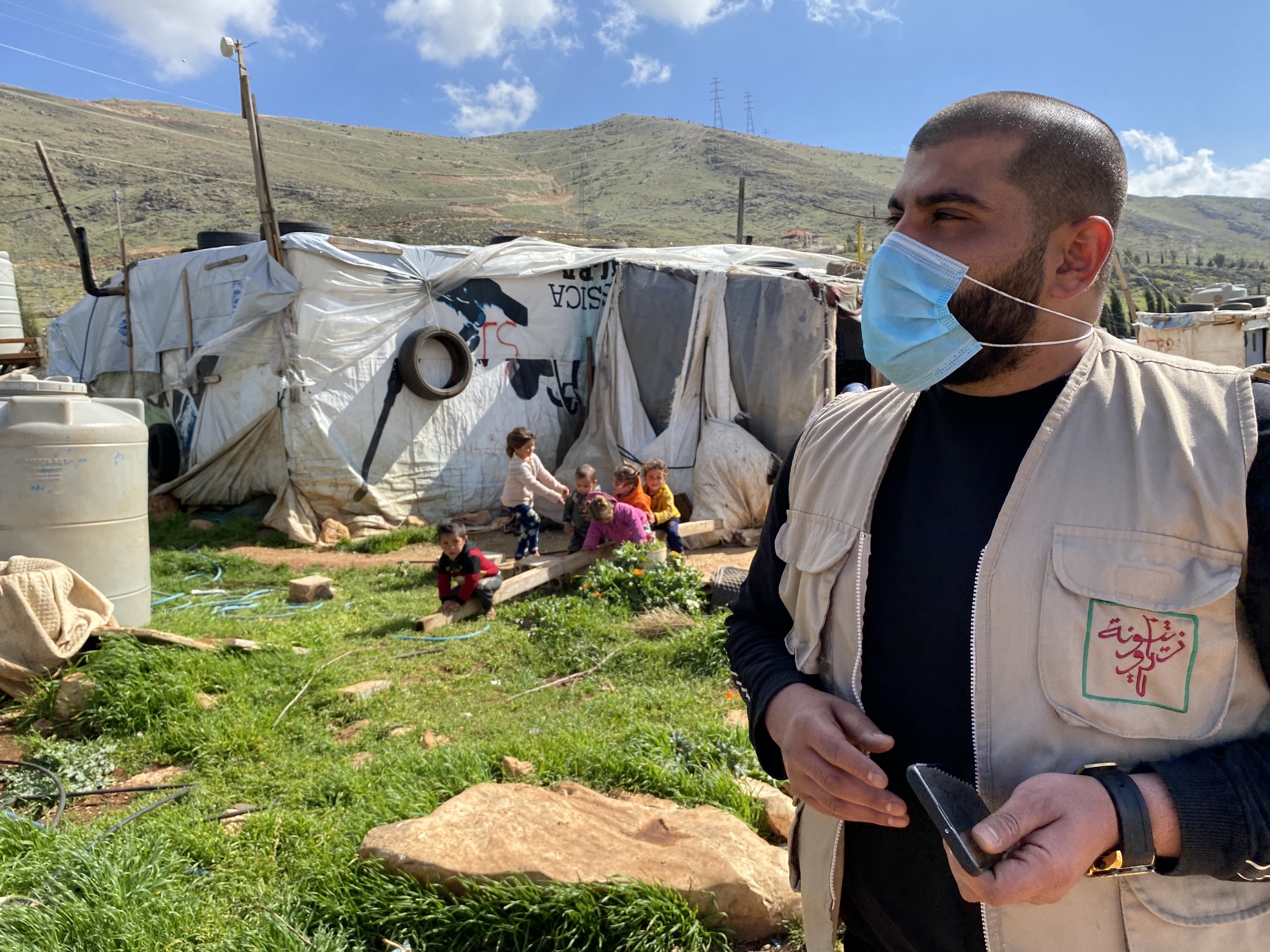 Khaled Abou Haykal, a project manager with Basmeh and Zeitooneh, in an informal refugee camp near the Syrian border.

“In 2011, the people here welcomed Syrian refugees. But now, there is a lot of tension between Syrians and Lebanese,” Abou Haykal said.

Those tensions are in part because Lebanon is suffering its own economic crisis. The country has seen mass inflation and a sharp increase in poverty and unemployment.

“There is a big competition for job opportunities.”

In some places, like Majdal Anjar, Syrian refugees outnumber the local population. Here, there are 25,000 Lebanese residents and 40,000 Syrian refugees.

Hamoud lost his job as the crisis hit Lebanon, and the cost of everything is going up. He doesn’t know how much longer he can afford to stay. He said despite his fears, he might decide to return to his land in Syria.

“I’ll put a tent until I fix the house,” Hamoud said. 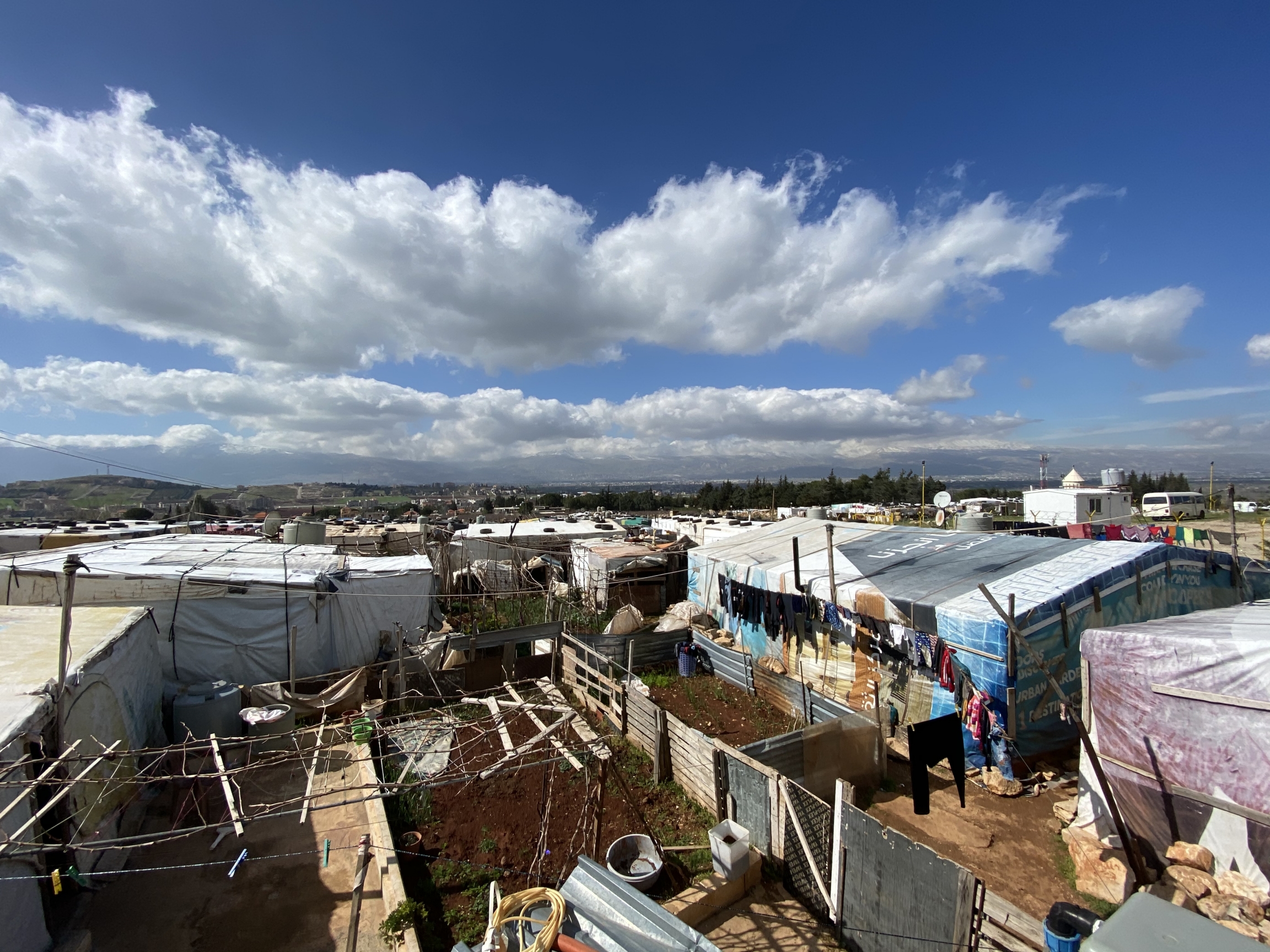 An informal camp in Lebanon, where 70 Syrian refugee families live near the Syrian border.

Ahmad is less desperate to go back.

“I saw death with my own eyes," she said.

Now, she says she needs to know her daughters will be safe if they go back. In the meantime, Ahmad is literally putting down roots. Outside her tent, she planted a small herb garden, vegetables and beans to supplement the aid her family receives as well as flowers that remind her of the garden she once had in Syria.

Hassan Harfoush contributed to this report.