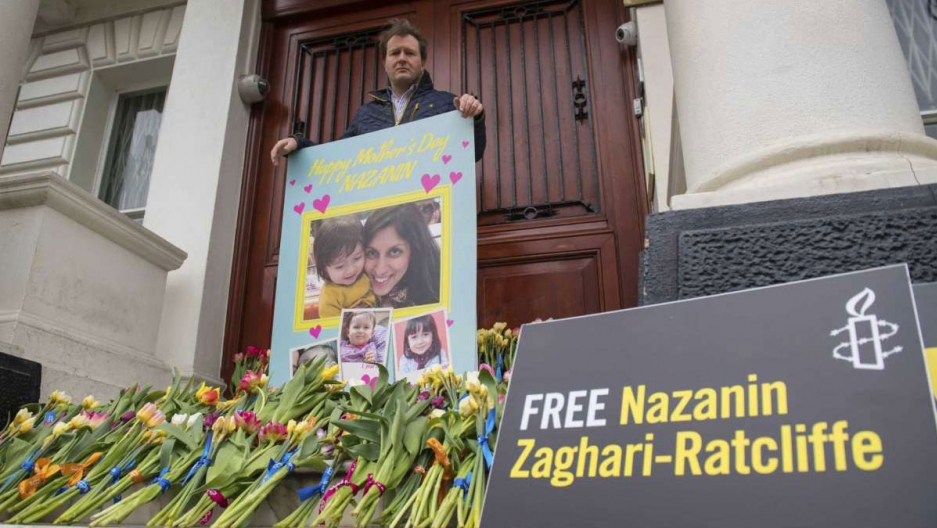 Richard Ratcliffe, the husband of British charity worker Nazanin Zaghari-Ratcliffe poses for a photo with a giant Mother's Day card and flowers left on the steps of the Iranian Embassy, in London, March 31, 2019/

Despite serving her sentence, Zaghari-Ratcliffe is now facing a new trial and cannot yet return home to London.

The twists and turns of Zaghari-Ratcliffe's years-long case have sparked international outrage and strained already fraught diplomatic ties between Britain and Iran.

Zaghari-Ratcliffe was allowed to remove her ankle monitor and leave house arrest but her future remains uncertain amid a long-running debt dispute between Britain and Iran and rising regional tensions.

"It feels to me like they have made one blockage just as they have removed another, and we very clearly remain in the middle of this government game of chess," her husband Richard Ratcliffe said.

Iranian state-run media reported that she has been summoned to court on March 14 over murky new charges, including "spreading propaganda," which were first announced last fall. Her trial was then indefinitely postponed, stirring hopes for her return home when her sentence ended. Authorities released her on furlough last March due to surging coronavirus pandemic, and she has remained in detention at her parent's home in Tehran since.

Zaghari-Ratcliffe, 43, was sentenced to five years in jail after being convicted of plotting to overthrow Iran's government, a charge that she, her supporters and rights groups vigorously deny. She was taken into custody at the airport with her toddler daughter after visiting family on holiday in the capital of Tehran in 2016. At the time, she was working for Thomson Reuters Foundation, the charitable arm of the news agency.

The United Nations has described her arrest as arbitrary, and reported that her treatment, including stints in solitary confinement and deprivation of medical care, could amount to torture.

British Prime Minister Boris Johnson welcomed the removal of Zaghari-Ratcliffe's ankle tag but called for her to be allowed to return home.

"Her continued confinement remains totally unacceptable," he said on Twitter. "She must be released permanently so she can return to her family in the UK, and we continue to do all we can to achieve this."

The latest setback in Zaghari-Ratcliffe's case comes as Britain and Iran negotiate a spat over a debt of some 400 million pounds ($530 million) owed to Iran by London, a payment the late Iranian Shah Mohammad Reza Pahlavi made for Chieftain tanks that were never delivered. The shah abandoned the throne in 1979 and the Islamic Revolution installed the clerically overseen system that endures today.

Ratcliffe, who for years has campaigned vocally for his wife's release, has said that Iran was holding Zaghari-Ratcliffe as "collateral" in the dispute. Authorities in London and Tehran deny that Zaghari-Ratcliffe's case is linked to the repayment deal. But a prisoner exchange that freed four American citizens in 2016 saw the US pay a similar sum to Iran the same day of their release.

Her case has also played out against rising tensions over Iran's tattered atomic deal with world powers. Since former US President Donald Trump unilaterally withdrew from the deal in 2018, Iran has been accelerating its breaches of the pact by enriching more uranium than allowed, among other actions. Tehran is seeking to press the other signatories to the deal, including Britain, to help offset the economic devastation wrought by American sanctions.

As for Zaghari-Ratcliffe, exactly what will happen next weekend in court remains uncertain. Her family and supporters fear the worst.

"We don't know how to interpret being summoned ... Is it that they're just going to finish off all the paperwork and release her and give her passport back? Or Is it that they are going to whack her with that second sentence?" her sister-in-law Rebecca Ratcliffe told UK's Sky News.

The uncertainty means "there are a few more sleepless nights ahead of us," she added.

In what the UN has criticized as an "emerging pattern," Iran frequently has arrested dual citizens in recent years, often using their cases as bargaining chips for money or influence in negotiations with the West, something Tehran denies.

Several other dual nationals, including at least one other British citizen and three Americans, remain in prison. Iran refuses to recognize dual nationality, so detainees like Zaghari-Ratcliffe cannot receive consular assistance.

Meanwhile, with her ankle tag off for the first time, Zaghari-Ratcliffe spent the afternoon visiting her grandmother and the family of one of the other British Iranians held in prison, her husband said.

"It's a mixed day for us," Ratcliffe added. "She is having a nice afternoon, has turned her phone off and is not thinking about the rest of it."

By Amir Vahdat and Isabel Debre/AP