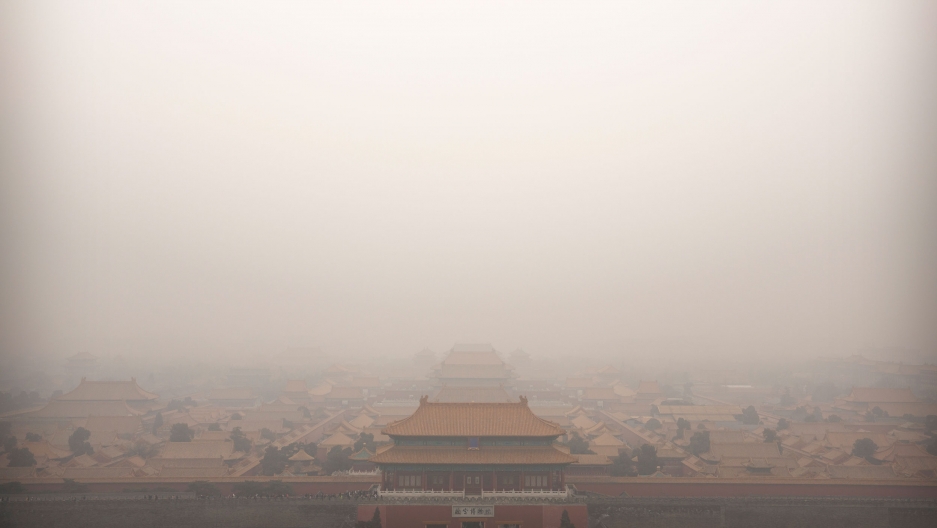 China's Forbidden City on a day with high levels of air pollution in Beijing, Jan. 2020.

China announced moderate new energy and climate targets on Friday at its ceremonial National People's Conference that give little sign that it will step up its pace in combatting climate change.

On a smoggy day in Beijing, Premier Li Keqiang said the country will reduce carbon emissions per unit of economic output by 18% over the next five years.

The meeting is China's highest-profile political event of the year, where the ruling Communist Party unveils new policies and legislation.

The 18% target is the same as in the previous five-year economic plan. The country uses carbon emissions per unit of economic output, or carbon intensity, instead of absolute emission reduction targets.

"We were very keen to see what the 14th five-year plan would say about how to actually get there, or maybe even more ambitious targets," said Dimitri de Boer, chief representative of ClientEarth, an environmental law charity. "What we've seen of the actual plan is that there is a target on reducing carbon intensity by 2025 but we can't tell what exactly that means in total emissions."

In September, President Xi Jinping announced that China would aim for carbon neutrality by 2060, and a peak in emissions by 2030. The carbon neutrality announcement led many to expect there would be sharper targets.

Government planners offered a few more specifics in a summary of the new five-year plan. It sets a target for non-fossil energy to account for 20% of total energy consumption by 2025, which will require further investment in solar and wind energy. It did not mention any ban on new coal projects, which experts say would be a significant step.

China obtains 60% of its power from coal and is the world's biggest source of climate-changing industrial pollution. As a result, its carbon intensity is higher than any other country.

Climate change experts say the new plan does not include indicators previously given by the government, such as a 5-year GDP target, which would set more concrete limits since carbon intensity is calculated using GDP.

Lauri Myllyvirta, lead analyst at the Centre for Research on Energy and Clean Air in Helsinki, said the lack of such concrete numbers could be good because it could offer the government more flexibility in pursuing green policies.

Many are waiting to see whether the government will unveil more detailed regulations on carbon-intense industries such as steel and cement manufacturing later this year.

Although the new target continues the same pace as the previous five-year plan, experts say achieving it will be harder given earlier gains.

The country achieved a 18.6% reduction in the last five-year period.

"It should be more challenging than in the last five years because you are doing better … the marginal cost will be higher," said Zou Ji, president of Energy Foundation China, a charity dedicated to sustainable economic development.

Whether China will pick up its pace remains to be seen.

"This is very gradual progress at best," said Myllyvirta. "It's much more of continuing business as usual."