Protesters across Spain have taken to the streets to demand rapper Pablo Hasél’s release from prison.

He was arrested last Tuesday for language glorifying terrorism and insulting the Spanish monarchy.

In a series of tweets and lyrics, Hasél has defended the violent actions of the now-defunct armed organizations ETA and Grapo; wished for the death of the Spanish royal family; and called former King Juan Carlos I a “mafia boss,” among other things.

Hasél’s supporters say that his nearly three-year prison sentence is an attack on freedom of expression in Spain.

Thousands of people across the country have joined in the protests, waving signs and erupting in chants of “liberty for Pablo Hasél.” But at night, some protests turned violent, with people looting stores, burning trash bins and throwing rocks at police who shot back with foam bullets. 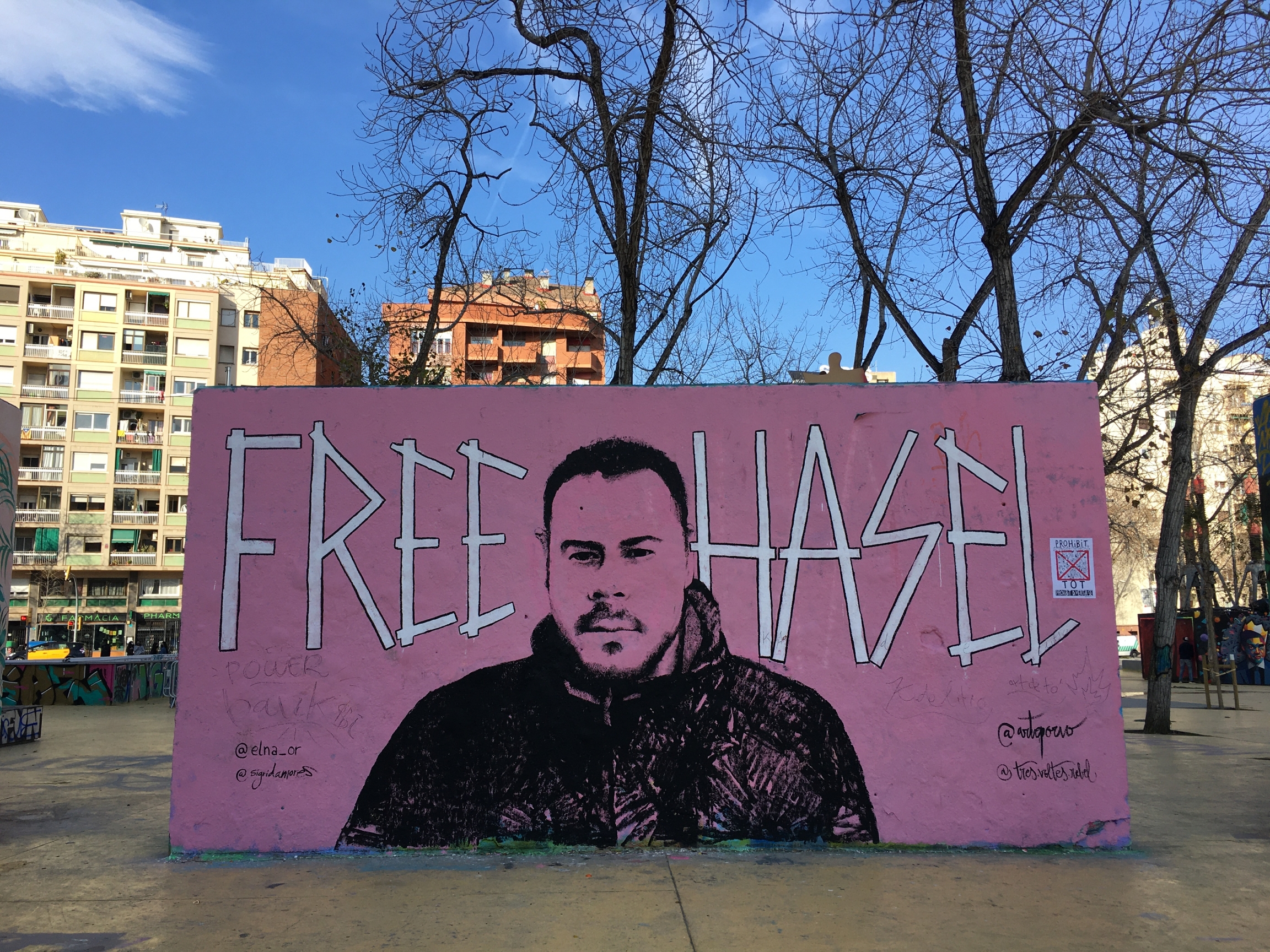 Protesters across Spain have taken to the streets to demand rapper Pablo Hasél’s release from prison and murals like this one have gone up across the country. This one from downtown Barcelona was painted earlier in the month, before the rapper's recent arrest.

More than 100 people have been detained, and dozens of protesters and police officers have been injured. One woman at a Barcelona protest lost her eye.

Over the past week, hundreds of artists — including Spanish filmmaker Pedro Almodóvar and actor Javier Bardem — signed petitions calling for his release.

Hasél, whose real name is Pablo Rivadulla Duró, was not a famous rapper until he began to face legal trouble.

He was convicted in 2015 for song lyrics he shared online but didn’t serve prison time. Hasél was separately convicted in 2018 for his rhetoric in tweets and lyrics; he appealed the case, but it was upheld by Spain’s top court last month, prompting his recent arrest.

Hasél has also separately been accused of assaulting a journalist and threatening a witness in a previous trial — but the appealed verdicts are still pending.

Related: The movement to restore the memory of Spain’s forgotten women artists

In early February, authorities gave Hasél 10 days to turn himself in, but he resisted, barricading himself at the University of Lleida with more than 50 of his supporters.

Now, Hasél is the first person since Spain’s transition to democracy in the 1970s to go to prison for speech-related offenses punishable under the country’s anti-terrorism law, multiple sources say. But he’s not the first to be convicted.

Between 2011 and 2017, at least 119 artists, journalists and social media users have been condemned under such a crime, according to an Amnesty International report.

One of the most high-profile cases involves the rapper Valtònyc, who was given three years in prison for his lyrics that also glorify terrorism and insult the Spanish crown. He wrote these songs when he was just 18 years old. He went into self-exile in Belgium in 2018, when he was 24.

“They’re trying to scare us to limit our creativity. And that makes me angry because at the end of the day, the right to our own opinions and to create our own art is the only thing we have left.”

“They’re trying to scare us to limit our creativity,” said Valtònyc, whose real name is Josep Miquel Arenas Beltrán. “And that makes me angry because at the end of the day, the right to our own opinions and to create our own art is the only thing we have left.”

In Spain, 14 rappers have been sentenced to prison for their lyrics — though all but Valtònyc and Hasél are waiting on their appeal verdicts. Valtònyc says that’s the highest number of convicted rappers in a single country in the world.

“I’d like to ask Americans if they would think it normal for Snoop Dog to go to jail for having a music video where he pretend-shoots a clown dressed as Donald Trump,” Valtònyc said. “Or for Madonna to go to jail for suggesting she’d like to put a bomb in the White House.”

Joan Queralt, professor of criminal law at the University of Barcelona, says Hasél’s writing and actions are seen by many as provocative, but in a democratic society, that shouldn’t be enough of a reason to send someone to jail.

Related: Abortion is a protected right in Spain. But the govt blocked a website that provides abortion info and pills.

“We have to differentiate between two things,” Queralt said. “The cases Hasél faces for voicing his opinions and those he faces for public misconduct.”

Queralt says that legally speaking, Hasél’s past cases should not have been taken into account when Hasél was arrested last week.

He says that Hasél and many other individuals are facing jail sentences because of outdated legislation meant to fight back against Spanish terrorist groups at the height of domestic terrorism in the early 2000s.

“We have a court system that’s meant to review terrorism cases, but with the lack of domestic terrorism, they’re now focusing on those who they claim to praise terrorism.”

“We have a court system that’s meant to review terrorism cases, but with the lack of domestic terrorism, they’re now focusing on those who they claim to praise terrorism,” Queralt said.

Yet, left-leaning artists seem to be disproportionately affected, he added. Just three days before Hasél’s arrest, around 300 Nazi sympathizers filled the streets of Madrid doing the fascist arm salute and chanting anti-Semitic slogans. So far, none of them have been prosecuted for their actions.

“The system is fundamentally conservative,” Queralt said. “And there’s a long tradition of authoritative leadership in Spain.”

Related: Under quarantine, the first talking film made by a woman in Spain resurfaces

Miquel Darder and Berta Tuset were at the protest together in Barcelona the night that 32-year-old Hasél was taken into custody by authorities. Darder and Tuset said that Spaniards are fed up with the government arresting people for voicing their beliefs.

Tuset pointed to the arrests of nine Catalan leaders who organized an independence referendum in 2017 deemed illegal by Madrid, and seven others who went into self-exile.

“I won’t believe any promises made by politicians to change the country’s criminal code. Not unless I see some real actions.”

“I won’t believe any promises made by politicians to change the country’s criminal code,” Darder chimed in, adding, “Not unless I see some real actions.”

The country’s democracy, the two agreed, has “fascist” origins. It was reestablished in the late 1970s after nearly 40 years of dictatorship under Francisco Franco who carried out a massive repression campaign against political dissidents and executed tens of thousands of politicians, labor union members and Catalan nationalists.