“I felt all the emotions like … I was nervous, I was happy, I was ready, I was not ready,” she recalled.

Ready or not, she had to begin and so she set off to climb Mount Ama Dablam in Nepal with her team in the darkness.

It was a long, technical climb, she said, and they all needed to stay focused. The subzero temperatures, wind, low oxygen at those heights and physical exhaustion didn’t help. One small mistake could cost them their lives.

There was one point when things started to look up.

“I saw the sun [...] I was seeing all the colors. It was like between orange and yellow … and it was like … I forgot everything.”

“I saw the sun [...] I was seeing all the colors,” she said. “It was like between orange and yellow … and it was like … I forgot everything.”

It was then, at around 11 a.m., on Jan. 14, Harthy became the first Arab woman to reach the summit of Mount Ama Dablam — about 22,000 feet — according to mountain records.

At that moment, she said, “I felt real happiness.”

Harthy is one of a growing number of Arab women who are following their dreams of climbing mountains despite resistance from their families and society. And while the coronavirus pandemic has slowed down climbing season in many parts of the world, Arab women mountaineers are still setting records.

Harthy, who works for the Ministry of Education in Oman and was formerly a geography teacher, says she got interested in mountaineering in 2017. That’s when she met Khalid al-Siyabi, an information technology expert who, in 2010, became the first Omani man to reach the summit of Mount Everest.

Siyabi trained and mentored Harthy for two years. Harthy climbed mountains in Oman, ran long distances and swam. And all that time, she kept her dream a secret.

“Sometimes, people … they kill your dreams if you start talking about [it]. I didn’t want to listen [to them say] ‘yes, you can or you cannot.’ I [didn’t] want to evaluate my dream,” she said. 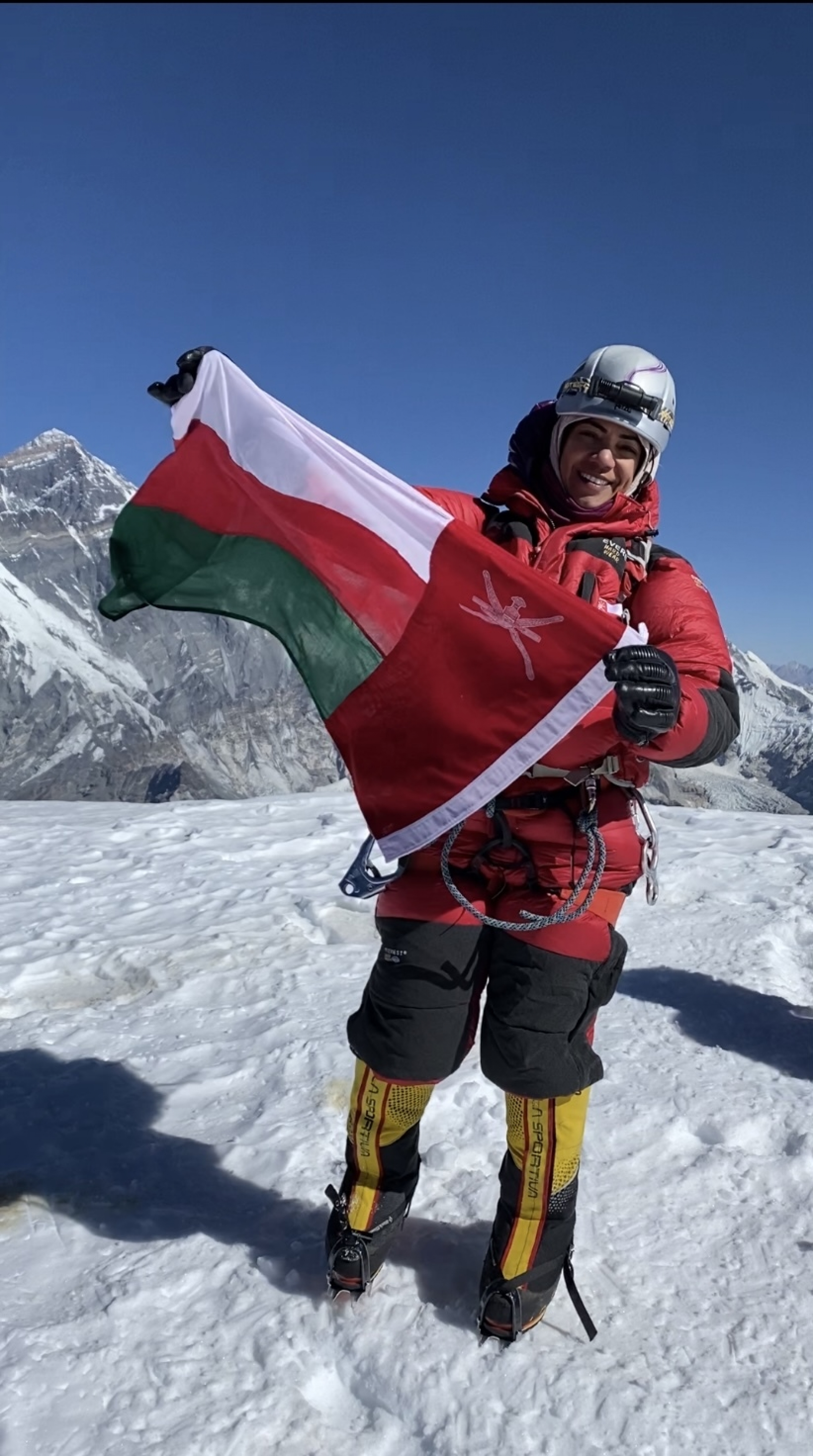 Omani climber Nadhira al-Harthy at the summit of Mt. Ama Dablam in Nepal on Jan. 14, 2021.

In 2019, only two weeks before her Everest expedition, Siyabi died suddenly. Harthy was heartbroken but she kept climbing.

Sisterhood in the mountains

Harthy was part of a group of four Arab women who teamed up to climb Mount Everest together.

One of them was Mona Shahab, who is Saudi Lebanese and describes herself as a lover of mountains and the outdoors.

“People ask me, ‘Mona are you married?’ I’m like, “Yes, married to the mountains. I’m in a polygamous marriage, literally.” I love the mountains.”

“People ask me, ‘Mona are you married?’ I’m like, “Yes, married to the mountains. I’m in a polygamous marriage, literally.” I love the mountains,” she said from Saudi Arabia.

Shahab said she too, faced criticism and even outright hostility about her passion for climbing.

She remembered the time in 2012 when she and a group of her friends wanted to climb Mount Kilimanjaro. They were raising funds for a cancer center in Saudi Arabia, she said, and a local publication wrote about their trip.

“The comments online were horrible,” Shahab said. “They were horrific. Basically, [they were] condemning our parents and [telling them] you guys are not good Muslims, and how can you let your daughters go with men and all that.” 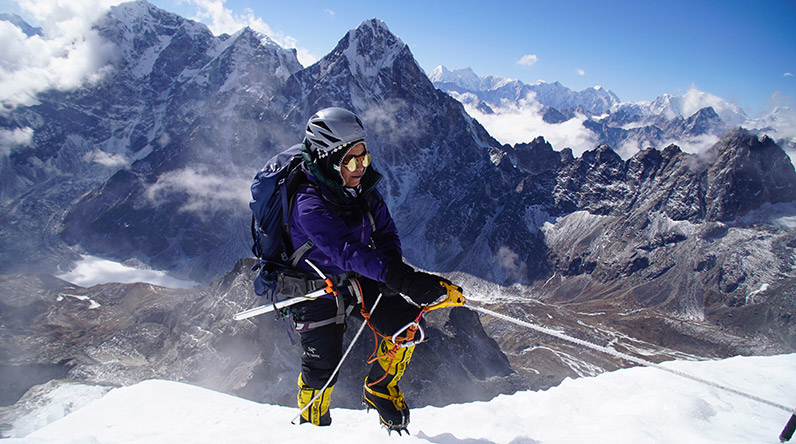 One businessman, she said, went as far as writing a letter to the local governor, demanding that their passports be taken away, and saying that they should be temporarily banned from travel.

“I was bothered not for me but I know my parents, especially my father … these comments bothered him,” she said. “It’s not like he’ll change his mind but it’s all about what’s the society going to say in the end.”

Shahab stuck with it. She climbed Kilimanjaro and Everest.

She went to the Netherlands for a few years to study clinical psychology, and now she is back in Saudi Arabia, getting ready for her next big climb — Denali in Alaska.

“I’m going to be training in Saudi. Thank God, Saudi is not as flat as the Netherlands. People are like, ‘How do you train for a mountain in Saudi?’ I’m like, we do have sand dunes and we do have some mountains in the western parts of Saudi.”

“I’m going to be training in Saudi,” Shahab explained. “Thank God, Saudi is not as flat as the Netherlands. People are like, ‘How do you train for a mountain in Saudi?’ I’m like, we do have sand dunes and we do have some mountains in the western parts of Saudi.”

She went on: “Basically, what I do is I take a tire and I have a harness on me or my backpack and I tie the tire and I pull it up sand dunes, up and down. Because [with] Denali, what you’re doing is pulling a minimum of 60 kilograms [about 132 pounds] on a sled.”

Joyce Azzam from Lebanon was another member of the Everest team in 2019. She became the first Lebanese woman to climb Everest and complete the seven tallest peaks on every continent. 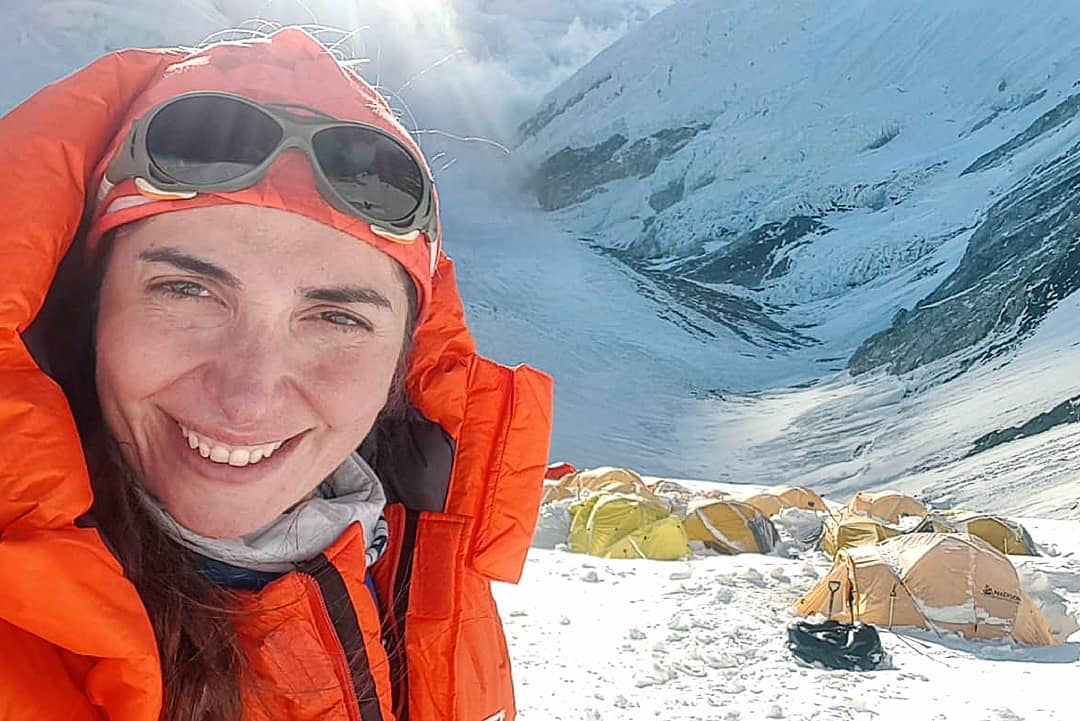 Joyce Azzam at Camp III while climbing Mt. Everest in May 2019.

Just like the other mountaineers, her path to success didn’t come easy.

Azzam was born in 1984 when her country was in the middle of a war.

“I remember missiles and bombings and fleeing and, you know, it was an aggressive childhood,” she said.

Growing up, she had big dreams, she said, but those dreams didn’t align with what her family and society deemed acceptable.

“It was as if I didn’t have the permission to dream. Because of my gender and because of my social class. Because … you know … like … why [do] you want to pay $100,000 [in total costs] to climb a mountain?” Azzam recalled.

Azzam went on to get a scholarship and study in Italy. She now has a PhD and specializes in the conservation of historical sites.

She waited tables and found sponsors to pay for gear, training, travel and all the rest. At the same time, she worked hard to convince her family that climbing mountains was a worthy passion.

Related: This doctor treated hundreds in an underground hospital in Syria known as 'The Cave'

In 2016, Azzam almost abandoned her project of completing the seven summits. The stress of training, studying and planning an extreme altitude climb was getting to be too much.

Then, she said, she saw an article in the news about Raha Moarrak, the first Saudi woman to summit Mount Everest — she was on her way to finishing the seven summits.

“She gave me this big motivation. I was like, wow, I am going to do this, too!”

“She gave me this big motivation,” Azzam recalled. “I was like wow, I am going to do this, too!”

To Azzam, a big part of climbing is “to inspire each other and to find sisterhood on the mountains.”

Azzam’s perseverance paid off. In 2019, after reaching the summit of Mount Everest, the last one on her list of seven summits, she called up her parents on a satellite phone.

“I was very emotional because they told me ‘we are proud of you. And we are sorry for all the adversity you had to go through,’” she said.

For her, hearing those words was “better than climbing [to] the top of the world.”

For these women, mountaineering is not just about the accolades and the public recognition. It’s about challenging mindsets and opening new opportunities for younger generations.

Azzam compared it to lead climbers who open up trails in the mountains.

“They sweat more than the people who are behind, but what they do, there’s the pleasure of opening the trail,” she said.