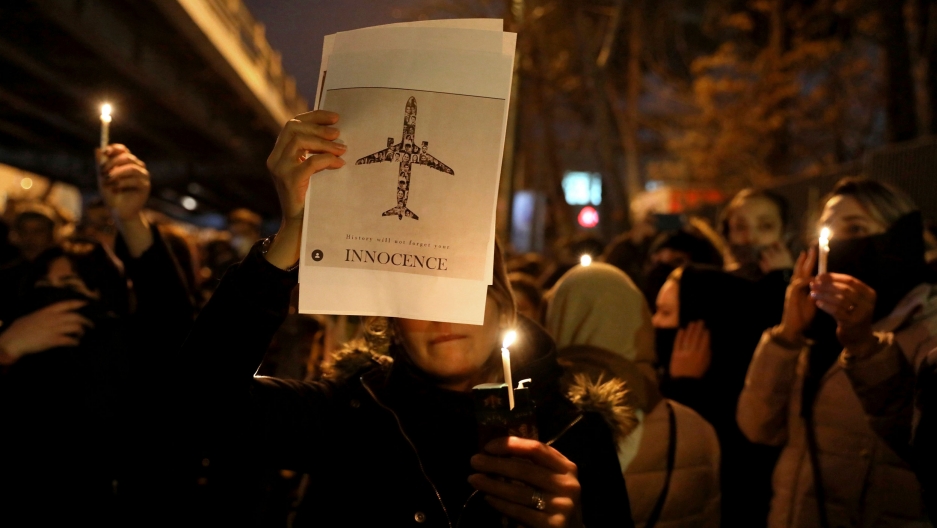 People gather for a candlelight vigil to remember the victims of the Ukraine plane crash, at the gate of Amri Kabir University in Tehran, Iran, Jan. 11, 2020.

When Navaz Ebrahim learned that a Ukrainian plane had fallen from the sky near Iran's capital, she didn't realize her older sister was on the flight. They had just spoken on the phone. Niloufar had promised her, like she always does, that everything was going to be alright.

As news spread of the jetliner that burst into flames and plunged to the ground, killing all 176 on board, Ebrahim called her mother in Tehran, desperate to hear that her 34-year-old sister and brother-in-law, newly married in the northern mountains of Iran, had taken any other plane home to London. Then her mother checked the flight number.

A year after Iran's military mistakenly downed Ukraine International Airlines Flight PS752 with two surface-to-air missiles, the answers that have emerged from the disaster only seem to lead to more questions.

Officials in Canada, which was home to many of the passengers on board, and other affected countries have raised concerns about the lack of transparency and accountability in Iran's investigation of its own military, while grieving families allege harassment by Iranian authorities.

"Without knowing what really happened to them, we're stuck in that same horrible night," said Ebrahim, who lives in Dallas, Texas. "We haven't received anything close to the truth."

The shootdown ignited an outburst of unrest across Iran, deepened public mistrust in the government and further damaged Iran's relations with the West. 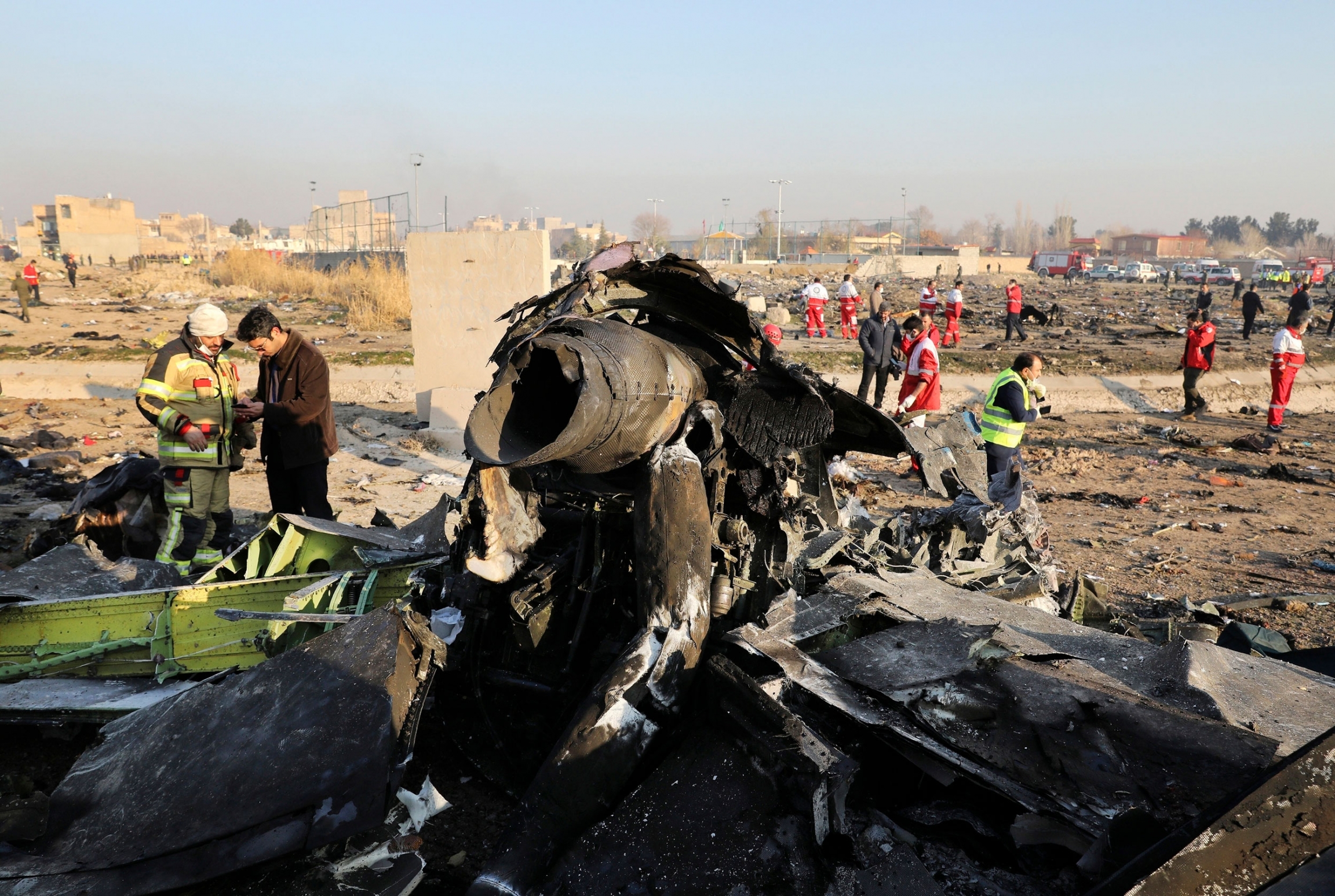 Debris litters the scene where a Ukrainian plane crashed in Shahedshahr southwest of the capital Tehran, Iran, Jan. 8, 2020.

After three days of denial in the face of mounting evidence, Iran admitted its own aerial defense forces downed the plane by mistake. Just hours before the crash, Iran had fired ballistic missiles at American bases in Iraq in retaliation for the US drone strike that killed Iranian general Qassem Soleimani in Baghdad. The strike pushed Washington and Tehran to the precipice of war.

On alert and fearful of American reprisals even as commercial air traffic were allowed to continue, lower-level officers mistook the Boeing 737-800 for a US cruise missile, authorities later reported. After receiving no response from higher command, a missile operator opened fire in violation of protocol.

The civilian airliner, bound for the Ukrainian capital of Kyiv, exploded. The bodies of the passengers — including 82 Iranians, 57 Canadians and 11 Ukrainians — were burned beyond recognition and strewn across a field near the village of Shahedshahr just outside of Tehran. They were students, recent graduates, newlyweds, doctors, parents and children. The youngest was a 1 year-old girl.

In the immediate aftermath, Iran denied international accusations of the shootdown and tried to clear the crash site. Bulldozers rolled into the farmland, sweeping up the plane's debris, according to accounts in a Canadian government report released last month. Local villagers picked over the wreckage, pocketing valuables. Ebrahim saw nothing of Niloufar's wedding gifts, gold coins and jewels, but received her brother-in-law's wallet, intact and empty.

"Clearing the site is very unusual, and absolutely against ICAO procedure of cataloguing every piece of evidence," said Jeffrey Price, a professor of aviation at the Metropolitan State University of Denver, referring to the UN's civilian aviation arm.

Further undermining its credibility, Iran refused to hand over the plane's black boxes — flight data and cockpit voice recorders — for over six months. Multiple families said the cellphones of their loved ones were either withheld or returned with memory chips removed, raising questions cited in the Canadian report about whether Iran had found evidence that passengers recorded videos or tried to call those on the ground in their final moments.

When the cover-up fell apart, security forces cracked down on protesters who thronged the streets, outraged at the tragedy and their government's deception.

Families were not allowed to hold candlelit vigils and their requests for private burials were denied. Instead, authorities plastered the coffins with messages reading: "Congratulations on your martyrdom!"

Plainclothes officers were seen among mourners at funerals across Iran, and those attending the services were later summoned for interrogation at government intelligence offices.

Within weeks, families in Iran and Canada say, virulent campaigns against them began. Hamed Esmaeilion, the Toronto-based spokesman of the victims' family association, said a dozen relatives across Canada reported harassment, ranging from hateful messages and threatening phone calls to suspicious cars tailing them at vigils or parking in front of their homes at night.

Canadian police say they are investigating cases of "harassment, intimidation and foreign interference" in the country.

From Edmonton, Canada, Javad Soleimani, whose wife was on the plane, said Iranian authorities repeatedly threatened him, calling to demand he take down his Instagram posts that blamed the Iranian government for funeral disruptions and harassment of outspoken relatives.

When Esmaeilion, 43, whose wife and 9-year-old daughter perished in the tragedy, circulated a petition online saying Iranian airspace could not be considered safe, he received death threats. A number he'd never seen before called him and a man's voice said: "Let's talk about the last moments of your wife and daughter."

When asked about the harassment allegations, Alireza Miryousefi, a spokesman at Iran's mission to the United Nations, said that Iran has "made every effort to alleviate as much as possible the pain and suffering of the families" and that "any suggestion otherwise is plain false."

Iran has yet to release its final investigation report on the shootdown, which is now under review by Ukraine. So far, official explanations have left foreign authorities and aviation experts unsatisfied, with Canada's special adviser to the prime minister calling Iran's narrative "difficult to accept" and lacking in proof.

An interim report from Iran's Civil Aviation Organization, published in July, focused on a "107 degree error" in an antiaircraft defense unit's radar system. The misalignment caused the operator to believe that the Ukrainian plane, climbing gradually to 8,000 feet as it departed from Tehran's Imam Khomeini Airport, was instead a small, low-flying cruise-missile hurtling toward the city.

"The level of incompetence required for someone to shoot down that plane is actually beyond belief," said Justin Bronk, a research fellow in air power at the Royal United Services Institute for Defense and Security Studies, noting the radar display's miscalibration does not explain other discrepancies in altitude, speed and size.

The UN's aviation agency recently urged Iran to speed up its investigation. The Ukrainian deputy prosecutor has criticized Iran's lack of cooperation. Last week, Iran's foreign ministry announced those responsible for the crash would be indicted within the month and its Cabinet promised to pay $150,000 for the families of each victim.

Most families have rejected the sum, seeing it as an attempt to close the case.

"I cannot walk away before knowing the truth and seeking some justice on her behalf," said Kourosh Doustshenas, whose 38-year-old fiancee, an immunologist living in Canada, was killed in the shootdown. His voice broke. "I cry because I still don't know why she had to die like this."