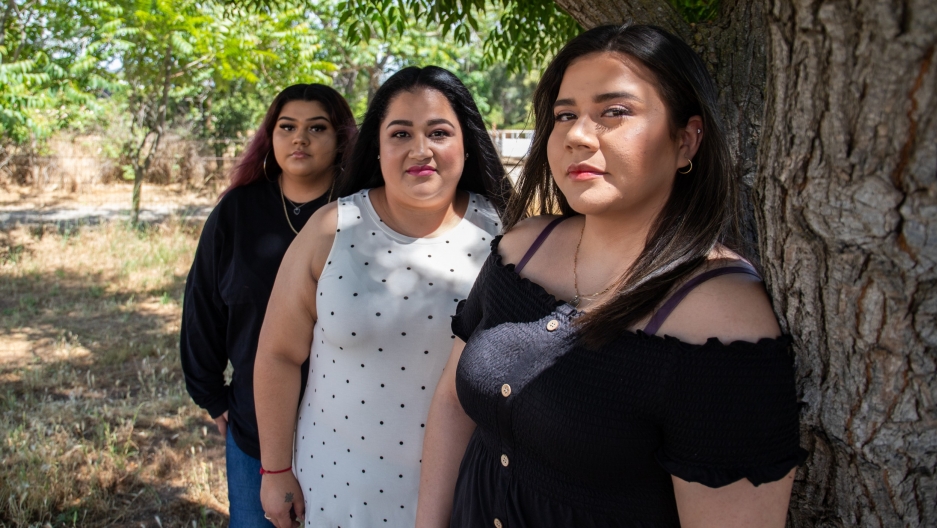 Marlene Herrera with her mother and sister in Valley Center, California, during summer 2020.

On US election night, 18-year-old Marlene Herrera was at her father’s house trying to keep a low profile. Though she was excited to vote in her first election, Herrera knew that her vote for Democratic candidate Joe Biden wasn’t in line with the rest of the household.

“My dad’s house, they have a very different political view than me,” she said, referring to the Nov. 3 vote. “So while everyone was rooting for the other side, I wasn’t.”

Herrera’s father, born in the United States, supported President Donald Trump — as did her Mexican immigrant grandparents. They liked his pro-business stances. So did her 16-year-old younger brother, though he couldn’t vote himself. In order to maintain the peace, her stepmother applauded Marlene’s decision to keep her voting decision quiet.

But Herrera wasn’t able to completely hide her political views.

Related: We followed eight young Latino first-time voters all year. Here’s how they view the 2020 election

“My grandfather kept coming out while the counting was still coming in and saying ‘Trump won,’ ‘Trump won,’ in Spanish, and I was just like, ‘No, he didn’t. It’s not done yet, stop listening to your news,'” she said.

Herrera’s parents split up when she was young and she divides her time between their households. While her father’s side of the family supported Trump, her mother’s side was mostly rooting for Joe Biden. In the days after the election, as Herrera watched the votes get counted while staying at her father’s house, she was keeping in close touch with her mom.

“My mom and I were messaging each other like, ‘Have you seen the election?’ and the minute that Pennsylvania turned and cleared the way for Biden, my mom was the first one to call me,” she said.

That call, which came on Saturday morning, woke her up. In San Diego, where Herrera lives, people took to the streets to celebrate Biden’s victory. Since then, Herrera hasn’t really discussed the election with her father’s side.

‘Hard for me to understand’

The split sides of Herrera’s family aren’t unique in US Latino households. A third of Latinos usually vote for Republicans,  and Trump was able to attract an even greater share of their votes in this election.

That left a lot of people wondering why — especially because of Trump’s anti-immigrant rhetoric. For four years, Trump had directed vitriol toward newcomers and introduced policies that made life more difficult for refugees and others seeking legal status in the country.

Herrera has felt the impact of anti-immigrant rhetoric in her own high school, from xenophobic comments to perceptions that she couldn’t actively participate in discussions of current events. But she was slowly coming to terms with her own family’s support of Trump.

“The main thing that surprised me most was my grandparents, considering the fact that they did come here as immigrants. And the whole hate that was sparked around the community because of Trump — it’s kind of hard for me to understand how they could vote [for him],” she said.

“The main thing that surprised me most was my grandparents, considering the fact that they did come here as immigrants."

“Everything they’ve gone through to stay in this country, to have their green card. How could you do that? But at the end of the day, it comes down to perspective,” Herrera added.

Reflecting on her grandparent’s choices, Herrera realized that a lot more impacts people’s political choices than just their identity. They live with Herrera’s father, who manages a grocery store. He has seen his hard work pay off. While he still works long hours, often coming home too exhausted to even eat, his work has led to economic stability for his household and a belief that in the United States, hard work can lead to prosperity.

But unlike her brother, who lives full-time with her father, Herrera hasn’t had the same lived experiences. A lot of her life was spent with her mom and her younger sister.

“I grew up in a single-mother household, my mom getting food stamps, getting government help,” she explains.

Her experience has shaped her own politics, with the government providing assistance to her mother — caring for two young daughters while holding multiple jobs. Herrera believes in the type of social safety net that many Democratic candidates support.

While Herrera voted for Biden and hopes his administration will bring relief to people hurting disproportionately during the COVID-19 pandemic, her original choice for president was Bernie Sanders, who proposed vast expansion in government assistance for working families and making university tuition-free.

Yet, in this year’s presidential election, more Latinos in California voted for Trump than in 2016. Herrera didn’t see this filter down to the Latino youth vote, however.

For the most part, the young people she knew were adamantly opposed to Trump. And while they weren’t supporting Biden wholeheartedly, they were still motivated to vote against Trump.

Her mother’s side of the family — including two aunts that live with her mother — didn’t all vote in this year’s election. Some were too busy with work, Herrera said.

“It was something or another on why they didn’t vote,” she said. One family member had just moved in from Arizona, and didn’t register to vote in California. She understood that with several kids to take care of, as well as jobs, her aunts didn’t have a lot of free time.

During the pandemic, Herrera’s world has grown smaller. She’s still waiting to attend college in-person, where she plans to study psychology. Her first year at San Francisco State University has been virtual, and she’s grown frustrated not being able to meet her peers. She hopes to soon broaden her horizons in the world of higher education.

Until then though, she’s trying to come to terms with how her own family has experienced this year’s election, and how their own lives  — as Mexican Americans, workers, and parents — have shaped their votes.

But that hasn’t stopped her entirely from trying to change people’s minds.

“It’s so hard to change a perspective,” she said. “I know I get frustrated. It’s just such a big split between both sides of my family.”