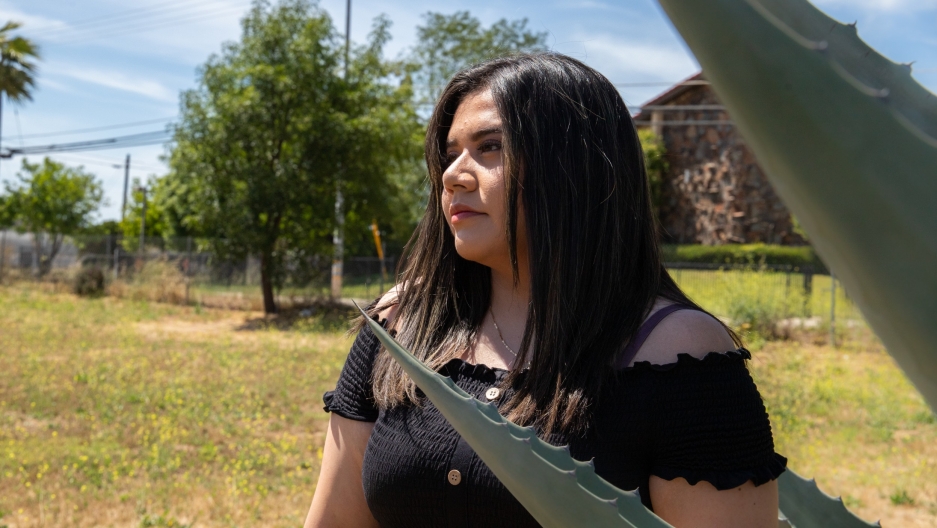 Marlene Herrera, in front of her home, is proud to be voting for the first time in federal, state and local elections.

For months, 18-year-old Marlene Herrera has been anticipating this moment. Recently, she finally got to open up the envelope sent to her from the state, revealing her double-sided ballot.

“It feels so weird grabbing it because I was like, okay, this is actually happening now. I actually have to fill in bubbles,” Herrera says as she looks over her choices.

Compared to some other parts of the country, voting by mail in California has been fairly easy. By order of the governor, this year all ballots were automatically mailed to voters. To vote, Herrera just needs to put hers back in the mailbox — no postage necessary.

Related: We followed eight young Latino voters all year. Here's how they view the 2020 election.

Herrera has spent the past few weeks living at her aunt’s house in Valley Center in San Diego County. She's helping take care of her young cousins while also attending her first year of college virtually. Casting her vote is her chance to have her voice heard — and she’s not taking that responsibility lightly.

Herrera has been researching the candidates because she’s not only voting for president and other political representatives this year — but also on state policies as far-ranging as rent control, affirmative action and labor protections for gig workers.

She flips over her ballot to take in everything she’s about to vote on.

“There’s judicial races, there’s one for Valley Center Parks and Recreation, its board of directors, which is funny to me because I didn’t know Valley Center had parks,” she says, laughing. Valley Center, in northern San Diego County, is mostly desert and farms.

‘Look after my white people’

The first choice on the ballot — the presidency — is the easiest for her. She fills in the bubble for Democratic candidate Joe Biden. After watching the first presidential debate, she says, she’s seen enough of President Donald Trump.

“He was kind of just [saying], ‘let me talk, let me talk.’ He should have been more respectful, he should have given [Biden] his two minutes, at least,” Herrera says.

She was also shocked when the president campaigned shortly after his COVID-19 diagnosis.

“He’s putting other people at risk at this point. It wasn’t handled correctly to begin with. Now he’s returning to the White House without a mask on.”

“He’s putting other people at risk at this point. It wasn’t handled correctly to begin with. Now he’s returning to the White House without a mask on,” she says.

Related: This Latina teen says the pandemic will mark her generation — and shape her vote

Some of Herrera's relatives are voting for Trump, and she’s tried to understand why. One conversation with a Trump-supporting family member left her was unconvinced by his arguments.

“He’s like, ‘Think about it this way: He’s going to want to help his people first before he helps anyone else.’ I think that made sense to him, but for me, that line bothered me a lot,” she says. “If you’re an American, you’re an American. It shouldn’t be, ‘I’m going to look after my white people.’ That shouldn’t be the case. That’s racism.”

That sentiment has stuck with Herrera these past four years, during which she's often felt as if she had to hide her true identity while in high school.

“I went to a very white school,” she said. “It made me so scared to speak up because I was a minority, and I think when [Trump] became president it made me watch what I said. I kind of just went into a corner where I didn’t want anyone to be against me and see in a certain light. Looking back, I regret doing that. I wish I would have spoken more.”

She also wishes she spoke out more about the treatment of migrant children in the custody of Customs and Border Protection.

“You never want to see kids in that situation, ever. They’re kids, they’re people. They should have at least a toothbrush or toothpaste, clean water, somewhere to shower,” she says.

Herrera sees her vote as half against Trump and half in support of Biden’s policies. Biden was never really her candidate — Vermont Sen. Bernie Sanders was.

“I’m very much hoping Biden holds true to his words. I don’t want another four years of unfulfilled promises,” she says.

Herrera wasn’t able to vote for Bernie Sanders earlier in the race, before he dropped out. She was still 17 — and not yet eligible to vote — when California’s presidential primary took place. Now she’ll be able to help other first-time voters in that situation. If approved by California voters, Proposition 18 on her ballot would allow 17-year-olds to vote in the state's primaries if they’ll turn 18 by the general election.

“As someone who was 17 for most of 2020, not being able to give some sort of voice, before the general election, was very frustrating,” she says. “As a 17-year-old, I was keeping up with the presidential thing. Why wouldn’t we be given that vote?”

Another major proposition on the California ballot this year is Proposition 22. It would overturn a new state law and roll back labor protections given to delivery and ride-hailing workers for companies such as Uber, Lyft, and DoorDash — politically powerful corporations that have spent millions supporting the proposition.

Herrera has been inundated with advertising in favor of Proposition 22, but is letting the experience of her own friends and family guide her choice. She is voting “no.”

Related: As polls open in Arizona, Biden wins this Latina's vote with his health care platform

After some more research on the other propositions, Herrera completes her ballot.

In February, Herrera had said she was determined to make sure her vote mattered. She now feels like it does and wants young people to change the direction of the country.

Over the next few days, she’ll be able to track her ballot online all the way to the county registrar’s office to make sure it gets counted. “Wow, this has been a ride,” she says.