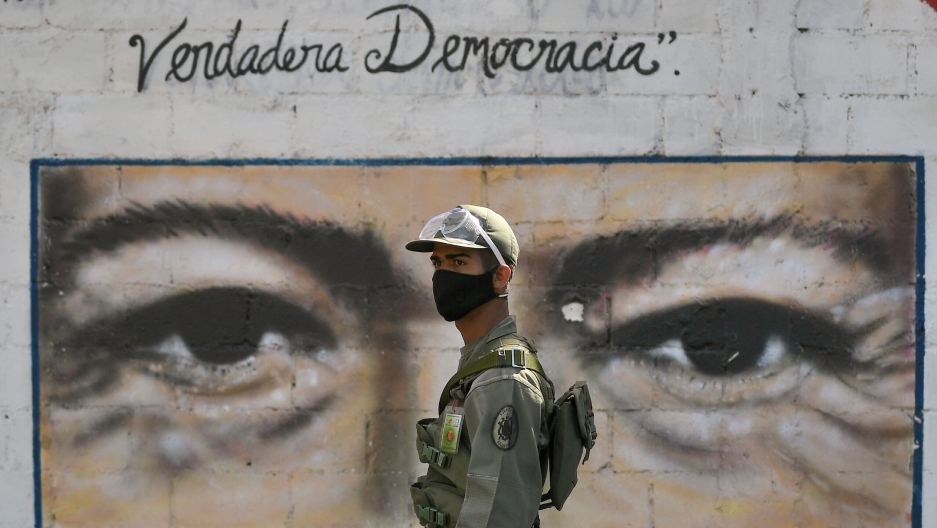 A soldier guards a voting poll at a school that has the eyes of the late President Hugo Chávez painted on a wall during elections to choose members of the National Assembly in Caracas, Venezuela, Sunday, Dec. 6, 2020.

In an election boycotted by Venezuela's most influential opposition politicians and widely criticized internationally as being fraudulent, President Nicolás Maduro's political alliance claimed a sweeping victory Monday in congressional elections.

The win gives Maduro control of the last major branch of government outside his grasp. It plays out in the waning days of the Trump administration, which leaves office with Maduro firmly entrenched despite its efforts to bring about his departure through diplomacy and sanctions.

"We have recovered the National Assembly with the majority vote of the Venezuelan people," Maduro said in a televised address. "It's a great victory without a doubt for democracy."

Maduro's United Socialist Party of Venezuela and allied parties captured 67% of seats in the National Assembly in Sunday's election, said Indira Alfonzo, president of Venezuela's National Electoral Council. Just 31% of the 20 million registered voters participated in the election, she said.

The National Assembly has been led by US-backed politician Juan Guaidó, who has pressed to oust Maduro for nearly two years and end Venezuela's deepening crisis. He's backed by Washington and dozens of nations that consider Maduro's presidency illegitimate.

The election's outcome, however, appears to weaken both Maduro, who's accused as overseeing a fixed vote, and Guaidó, whose legal claim to the presidency hinges on his role as National Assembly head, while his own popularity fades after failing to oust Maduro.

The opposition boycott stems from a Supreme Court ruling this year appointing a new election commission, including three members who have been sanctioned by the US and Canada, without participation of the opposition-led Congress, as the law requires.

The court also removed the leadership of three opposition parties — including Guaidó's — appointing new leaders the opposition accuses of conspiring to support Maduro.

A small number of opposition parties not associated with Guaidó have held dialogue with the government and participated in the election. Critics say this allowed Maduro to maintain the semblance of a valid contest.

Maduro campaigned for his party's candidates — including his son and wife — promising to finally silence the right-wing opposition, which he accuses of inciting violent street protests and inviting US sanctions.

The election comes amid uncertainty over the impending change of US administration. Like outgoing President Donald Trump, President-elect Joe Biden has called Maduro a "dictator," though it's unclear what approach he'll take toward Venezuela's crisis.

Despite Venezuela's political turmoil, voting took place with no apparent problems in Caracas, where polling places were operated by civilian militia members and armed soldiers alongside election workers.

As a light flow of voters entered the polls, long lines of drivers throughout Caracas waited to fuel up their cars as the oil rich nation struggles to produce gasoline to meet domestic demands.

Guaidó's opposition movement is holding its own referendum over several days immediately after the election. It will ask Venezuelans whether they want to end Maduro's rule and hold new presidential elections.

"Although I cannot promise a magic solution today, I can tell you with certainty and security: You are not alone. We will not give up," Guaidó said in a video message. "We are going to give everything until we win."

Surveys indicate that neither Maduro nor Guaidó are popular among Venezuelans at a time the nation's economic and political crisis is deepening despite having the world's largest oil reserves.

Karol Teran, a nurse and single mother on her way to work in Caracas, said she didn't vote because it would have no impact. The election is controlled, she said.

"I don't feel like wasting my time, giving these people the opportunity, so I simply don't vote," she said. "We're tired of all this. I'm tired of all of this. It's not easy."

She was still considering whether to participate in the opposition's referendum.

More than 5 million people have fled the country in recent years, the world's largest migration after that of war-torn Syria. The International Monetary Fund projects a 25% decline this year in Venezuela's GDP, while hyperinflation diminishes the value of its currency, the bolivar, now worth less than a millionth of a dollar on the free market.

Maduro, the hand-picked successor to the late President Hugo Chávez, won a second term in 2018. But his political adversaries and scores of nations, including the US, reject his legitimacy, alleging the vote was rigged and his most popular challengers were banned.

Guaidó, 37, vowed to oust 58-year-old Maduro early last year — basing his claim to the interim presidency on his leadership of the National Assembly, whose term legally ends in early January under the constitution.

The Trump administration and other countries led support of Guaidó and have said they will continue to support him in the absence of what they consider fair elections.

Washington has hit Maduro and his political allies with sanctions, and the US Justice Department has indicted Maduro as a "narcoterrorist," offering a $15 million reward for his arrest.

US Secretary of State Mike Pompeo said that Sunday's election was fraudulent.

"The results announced by the illegitimate Maduro regime will not reflect the will of the Venezuelan people," he said on Twitter. "What's happening today is a fraud and a sham, not an election."

International bodies like the European Union have refused to send observers to Sunday's election, saying the conditions for a democratic process don't exist.

Maduro's government invited sympathetic international observers, former Presidents Evo Morales of Bolivia and Rafael Correa of Ecuador. Others included a group of men who identified themselves as Turkish lawmakers.

At a polling place in Chacao, an opposition stronghold of Caracas, 68-year-old resident Luisa Fermin shouted at the observers, calling the election "theatrics" that she wouldn't validate with her vote.