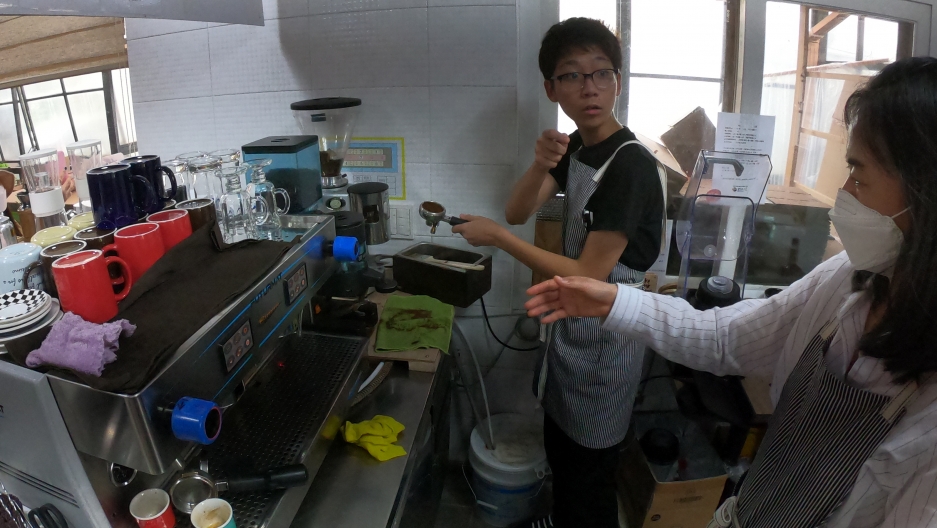 Baek Jae-wook is a teenager with an autism spectrum disorder and earned barista certifications from the Jayeondo Cafe in Incheon.

When Choo Kyeong-jin, who lives in Seoul, South Korea, first heard about the coronavirus outbreak at a local psychiatric ward in February, it triggered a visceral reaction. Health authorities say the cluster afflicted all 102 patients and led to eight deaths.

“All I could think about was that it could have been me,” said 51-year old Choo, who for much of the past two decades has lived in a sprawling institutional care facility with hundreds of other people with disabilities.

Choo is paralyzed from below his neck — the result of a 1997 motorbike accident. He says his then-wife “abandoned” him at a group home, and for years, he thought he’d spend the rest of his life “locked up” inside one of these centers.

He now lives with a full-time caregiver in a subsidized apartment in Seoul. Choo says he hasn’t gone out much this year because he’s worried about catching COVID-19. But, he thinks he’s still better off here than back in the institution.

“In that kind of place, no matter how you try to protect yourself, you could still catch the coronavirus.”

“In that kind of place, no matter how you try to protect yourself, you could still catch the coronavirus,” he said. 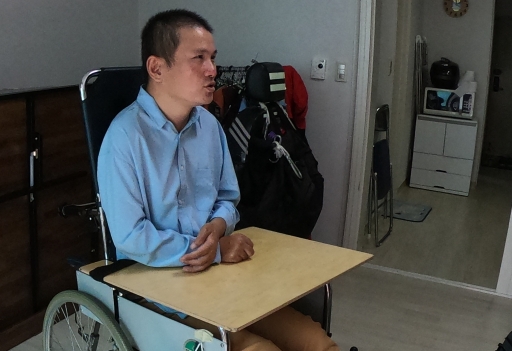 Choo Kyeong-jin lived with hundreds of other people with disabilities in a long-term care center for 15 years and now advocates for deinstitutionalization.

Since the pandemic’s start, international rights groups and public health advocates have made the same warnings. And, following a string of COVID-19 deaths at a South Korean psychiatric hospital, rights activists there are again calling for these centers to close — they say these facilities were already dehumanizing and are now even more dangerous.

In April, as the first wave of the coronavirus spread across many countries, the  United Nations cautioned that people with disabilities who live in residential care facilities face heightened risk of infection due to underlying health conditions and inability to socially distance, and they are more likely to experience “human rights violations, such as neglect, restraint, isolation and violence.”

Related: Will there be a monument to victims of the coronavirus pandemic?

Official data on how the pandemic has impacted this global population is scarce, but reports in the US and UK media as well as from international advocacy organizations suggest a disproportionate infection and death rate.

In South Korea, the pandemic has added new momentum to a movement that has for years pushed for the complete deinstitutionalization of people with physical, developmental and mental health disabilities from congregate centers. Rights activists there say the country’s institutional care system already denies its residents opportunities to be active members of society and now makes their lives even more precarious.

The Korean government has recently implemented new policies that could lead to less reliance on institutions to care for those with disabilities. But, some say reforming the residential care system alone isn’t enough to address the greater challenge of making society more inclusive.

For Choo, having the power to take oneself out of the care system is the first step toward inclusion. He says life at his former institution was dictated by routine — he had no control over the most basic of daily tasks, like when to wake up or what to eat.

In 2016, he was finally discharged, in part thanks to new disability rights laws, but largely because of his own determination.

“Institutions need to be closed. People with and without disabilities should live together in the community.”

“Institutions need to be closed,” said Choo, who now protests against institutionalization. “People with and without disabilities should live together in the community.”

Around 25,000 people with a physical or cognitive disability live in assisted living centers, government data shows. But unlike Choo, who could advocate for his own release, many others cannot. That’s according to Seo Won-sun at the Korea Disabled People’s Development Institute.

He says most institutionalized people have a developmental impairment and cannot make that decision for themselves — they’d need a relative or guardian to sign off. But others are completely cut off from their families; some relatives go as far as to change their addresses and telephone numbers so they cannot be found, he explained.

“This is the tragic history of disability,” he said.

Seo says many Korean families continue to send loved ones with disabilities to long-term care centers because the cost for at-home care could be prohibitively expensive and government support for assistive services is lacking.

Some other observers say this financial pressure underscores the stigma of disability in Korea.

People who cannot demonstrate their economic “productivity” are regarded as “useless,” said Byun Jae-won, policy director at Solidarity Against Disability Discrimination, a group in Seoul that assists people who’ve been discharged from the long-term care system and offers job training and educational courses.

“Families feel burdened by disabled children, that the child makes them unable to survive in the jungle,” Byun said. “This is why some think it safer to keep their disabled children in institutions.”

And for some families, like his, a disabled child is an embarrassment.

“My mother always told me that I am a shame to the family,” said Byun, who uses a pair of crutches while walking.

Byun, 27, said that he contracted a spinal disease as an infant, but was never institutionalized, though he speculates his mother, whom he no longer speaks with, might have preferred that.

“She’d say, I want you to just stay at home and be invisible.”

After decades of relying on the private sector and charities to care for people with severe disabilities, the Korean government is doing more to help those living outside the system.

Seoul has increased support for independent living and last year launched a program that integrates private housing with medical services in communities.

But, Jang Hye-yeong, a National Assembly lawmaker from the progressive Justice Party, suggests that instead of regarding deinstitutionalization as just “getting people out of institutions,” efforts should also focus on “preventing more people from going in.”

“Complete social integration is the only real solution to the institutional care system.”

“Complete social integration is the only real solution to the institutional care system,” said Jang, 32, whose 2018 documentary film, “When You Become An Adult,” followed her efforts to remove her sister, Hye-jeong, from a residential care home where she had lived for 18 years. The two now live together in Seoul.

She says those changes should start with desegregating the educational system.

“Not everyone has experience living with someone who has a disability,” she said. “If children with and without disabilities study together in the same classes, then as they grow up, they will think it’s natural to be together.”

Improving social integration also requires bringing down economic and employment barriers that prevent many people with disabilities from living independently, some advocates say.

Only 34.9% of people with disabilities have jobs, according to a survey published by Statistics Korea earlier this year. And there is no law that requires employers to pay the minimum wage to disabled workers.

Some parents worry that their children who have a developmental disability will be left behind. So last year, a small group of families from Incheon, a city west of the capital, created jobs for their kids.

Standing behind the Jayeondo Cafe’s counter, Baek Jae-wook placed freshly ground beans into the portafilter of a commercial espresso machine. While the coffee brewed, he scooped ice into a plastic cup and poured the Americano over the cubes.

A deadly coronavirus outbreak inside a closed psychiatric ward at the Cheongdo Daenam Hospital in North Gyeongsang Province has increased calls for the deinstitutionalization of people with disabilities in South Korea.

Baek, 15, is one of five teens with autism who’ve earned barista certifications here. While he’s eager to show off his degree, which is framed and rests on a bookshelf in the cafe, Baek shied away from answering direct questions.

Hong Joo-yeon, his mother, says the cafe isn’t just a barista training program — it’s a kind of therapy for these children.

“A cafe is one of the most interpersonal kinds of businesses that someone can work in,” said 52-year-old Hong.

“Here, my son can meet people who aren’t in his family, take their orders, listen to them and improve his ability to communicate,” and the community can get to know people with autism, she said.

Hong says she never considered sending Baek to live in a care home. She speculates that some parents institutionalize their children because they don’t realize their capabilities and also because some feel uneasy about having a child with a disability.

“I’m not embarrassed by my son,” Hong said. “I tell other parents of kids with autism that they shouldn’t feel ashamed about their child’s disability.”

This report was supported by the National Geographic Society’s Emergency Fund for Journalists.

Kwon Min-jin contributed to this story.