The pandemic has hit Mexico hard. The country ranks fourth — behind only the US, Brazil and India — in confirmed deaths from COVID-19. The head of the World Health Organization, Dr. Tedros Adhanom Ghebreyesus, said Monday that Mexico is in “bad shape,” and that the rise in cases and deaths was “very worrying.”

The virus has been bearing down especially hard on the country's medical personnel, with deadly consequences. Mexico never got its first wave fully under control, and cases are once again surging after months of stagnation. Health care workers here haven't had much of a break.

"We are really tired,” says Dr. Lorena Guerrero, an infectious disease fellow at the National Institute of Health Sciences and Nutrition in Mexico City. “All the health care professionals are really tired of treating patients with COVID[-19] nonstop."

Beyond the exhaustion, medical professionals are also getting sick. Government data shows the virus has killed more than 2,000 Mexican health care workers since March. Guerrero co-authored a research paper on COVID-19 mortality among medical workers in Mexico City and found many reasons for the deaths. Among them were high rates of comorbidities, not enough access to personal protective equipment (PPE), and inadequate testing to detect COVID-19 infections. 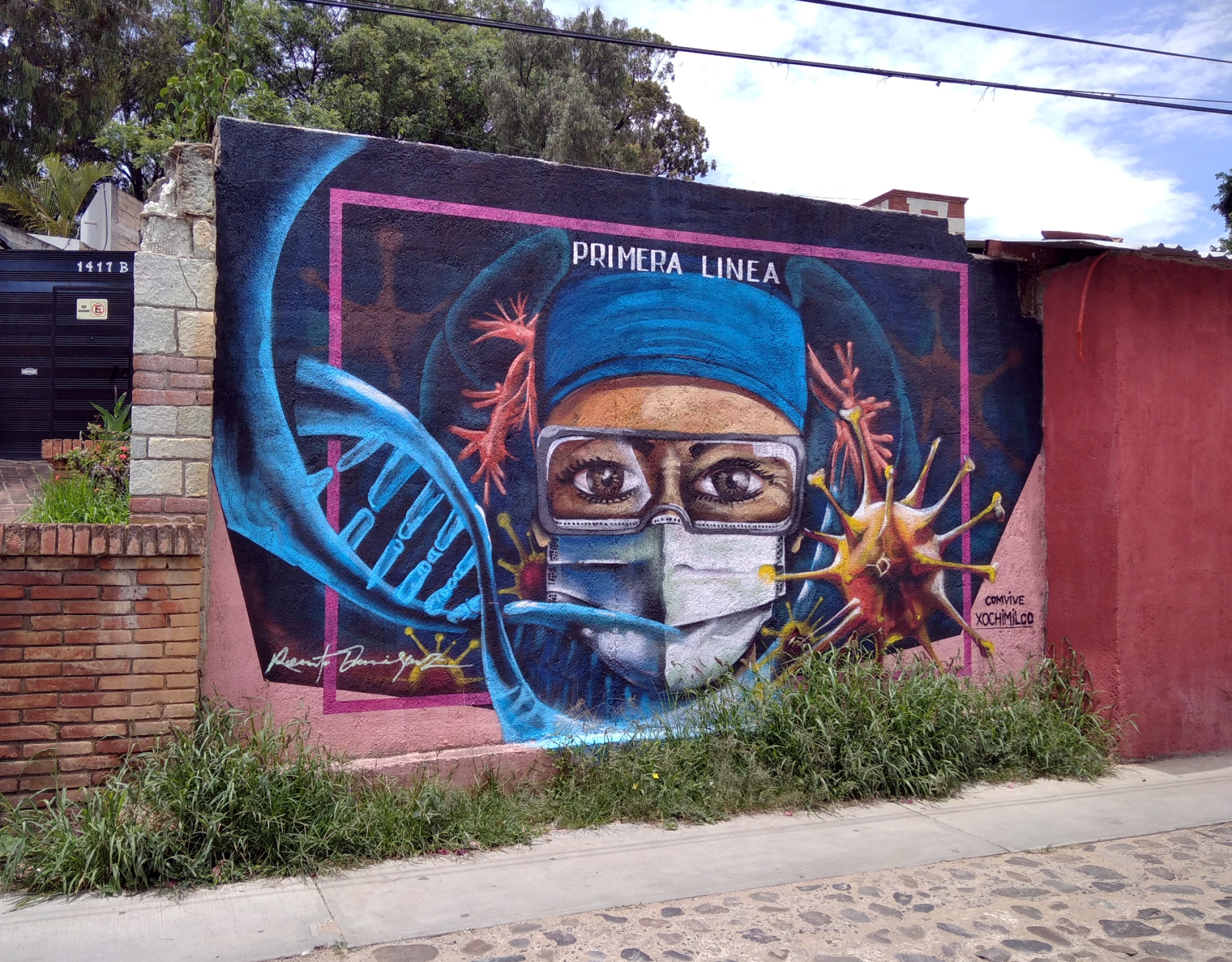 A mural near a federal IMSS hospital in Oaxaca City, Mexico, commissioned by a neighborhood organization to honor healthcare workers fighting the pandemic.

The leader of Mexico’s coronavirus task force, Deputy Health Secretary Dr. Hugo López-Gatell, has repeatedly dismissed the need for mass testing, arguing the pandemic is “immeasurable." The task force has used a methodology called “sentinel surveillance,” which restricts outpatient testing to a small sample of people who report to clinics with COVID19-like symptoms. López-Gatell argues that results from these samples reveal the dimensions of the larger outbreak without using the resources needed to mass test.

Sparse testing means sparse knowledge of who is actually infected with the coronavirus, and that can lead to uncontrolled spread. As a result, medical personnel can unknowingly come into close contact with patients carrying the virus.

“If you didn't think you were treating a patient with COVID[-19], you didn't get the equipment,” she says. “And that's a problem, because sometimes you don't know who has COVID[-19] and who doesn't until they have symptoms."

Guerrero works at one of Mexico’s top hospitals and says it has ample PPE supplies and access to tests with quick results thanks to an on-site lab. But that’s not the case at many smaller hospitals, particularly those where COVID-19 patients and people with more routine problems receive treatment in the same building.

A September report by Amnesty International showed Mexico led the world in the known number of health care workers who have died from the virus. Since then, deaths among medical professionals in the country have averaged nearly eight per day.

Mexico’s chief epidemiologist, Dr. José Luis Alomía, defended the government’s management of the pandemic at a recent press conference. He suggests official data on health care worker deaths may paint an exaggerated picture of workplace risks. “What the epidemiological surveys don’t show is if the person was actively working,” he remarked. Months ago, the government offered paid protective leave to public sector health care workers in high-risk categories.

However, not all medical personnel on leave from public hospitals stay home. Guerrero points out that it’s common for physicians in Mexico to maintain private practices, “so you cannot say entirely that they are at their house or at their home without risk. They are probably — or they could be — working with COVID[-19] patients in other institutions.”

Doctors make up nearly half of the 2,031 Mexican health care workers known to have been killed by the virus.

Several health care workers in Oaxaca would only speak to The World off the record due to concerns of professional reprisals. They say hospital-issued protective gear is sometimes sub-standard and they often have to spend their own money on N95 masks, face shields and even hand sanitizer. A couple of hospital staffers said colleagues who are supposed to be on protective leave are sometimes called in to cover shifts when staffing is short.

In light of the challenges facing health care workers, volunteers are stepping in to help.

“We coordinate with 911,” says Josué Martínez, a volunteer paramedic in Oaxaca with the ARVU Brigade. The group has an ambulance, and volunteers are mainly active on weekends. “We’re mostly on standby to help with accidents like car crashes, collisions or falls within homes.” 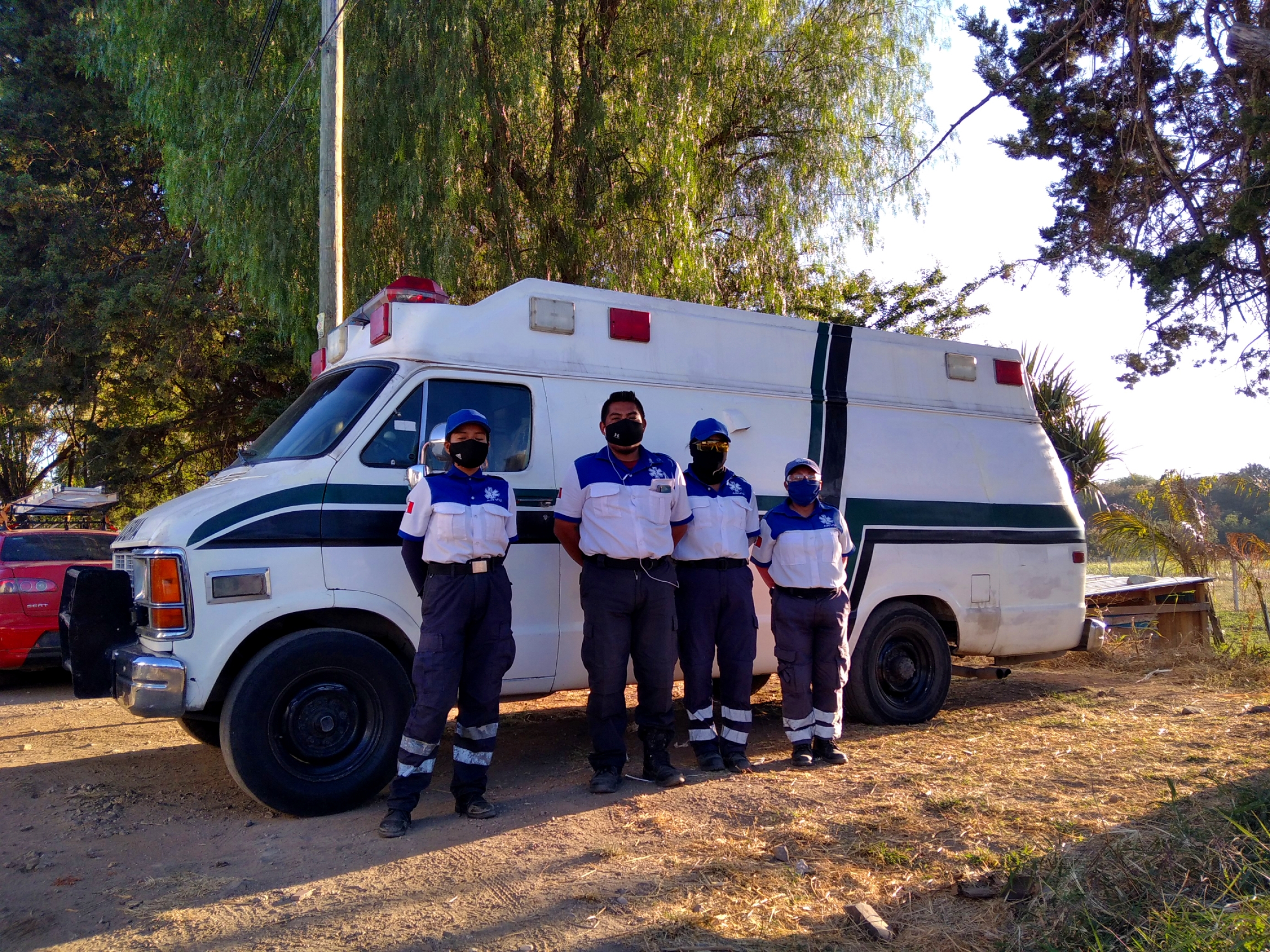 Josué Martínez and other members of the Brigadas ARVU volunteer paramedic crew park their ambulance by the side of the highway and ask for donations at stop lights when they're not responding to accidents or administering first aid.

During their downtime, the volunteers in uniform park their ambulance and ask for spare change donations at traffic lights to cover the costs of gasoline and first-aid materials.

Others help out by volunteering from home. Arturo Erdely is a mathematician and statistics professor at the National Autonomous University of Mexico, or UNAM. Every night he compiles, updates and tweets easy-to-read graphs based on data released by the federal Health Secretariat.

“With the same official data I try to offer graphs that are different from those the authorities present to offer other angles or perspectives that aren’t shown in the official graphs,” he notes.

The hashtag he uses, #YoTengoOtrasGraficas, translates to “I have other graphs.” He’s become a trusted data analyst for health care workers, journalists and his Twitter followers.

Erdely is also a member of Salvemos con Ciencia, or Let’s Save with Science, a recently formed organization of medical professionals, scientists and others with STEM-related profiles. The group includes doctors who volunteer for remote consultations and share expertise.

“First thing I would say is to test,” Dr. Lorena Guerrero says. “Increase the numbers of tests everywhere — at schools, at work, at the hospitals. Second recommendation would be to make sure that everyone knows how to use their face masks.”

After months of grueling work and loss, it’s clear the best way to help health care workers is to change the conditions that are making them sick. But lightening that load isn’t up to them. It’s a social contract that will require large-scale institutional effort, political will and disciplined participation from the general public.