In southern Mexico City, halfway up one of the mountains that encircle the city, Fernando Lozano and Dalia Davila open the gate to their tortilla shop every morning and fire up the oven to get ready for the lunchtime rush.

Lozano and Davila, partners in life and in business, estimate they supply about 440 lbs. worth of tortillas every day to restaurants and neighbors hungry for one of the staples of the Mexican diet.

And their La Abuela tortilla shop, named “the grandmother” in Spanish, has begun providing another basic service this year: Wi-Fi internet and television viewing for students who otherwise have no other means of accessing online education during the pandemic.

“The kids in our neighborhood are our kids, and we don’t want our kids to fall behind,” Davila told The World.

Related: Pandemic learning in Mexico requires thinking outside the screen

About 2.5 million students have dropped out since the country’s public schools have remained closed nationwide since the beginning of the coronavirus pandemic in March, according to Mexico’s undersecretary for higher education, Luciano Concheiro Bórquez.

In Mexico City, the country’s largest metro area, about 40 percent of all households don’t have access to a broadband internet connection or TV at home, according to the most recent government data from 2015.

Teachers in the state of Oaxaca have handed out their own materials to students. And one teacher in the state of Chiapas outfitted a roving wireless router for pupils to access the internet. 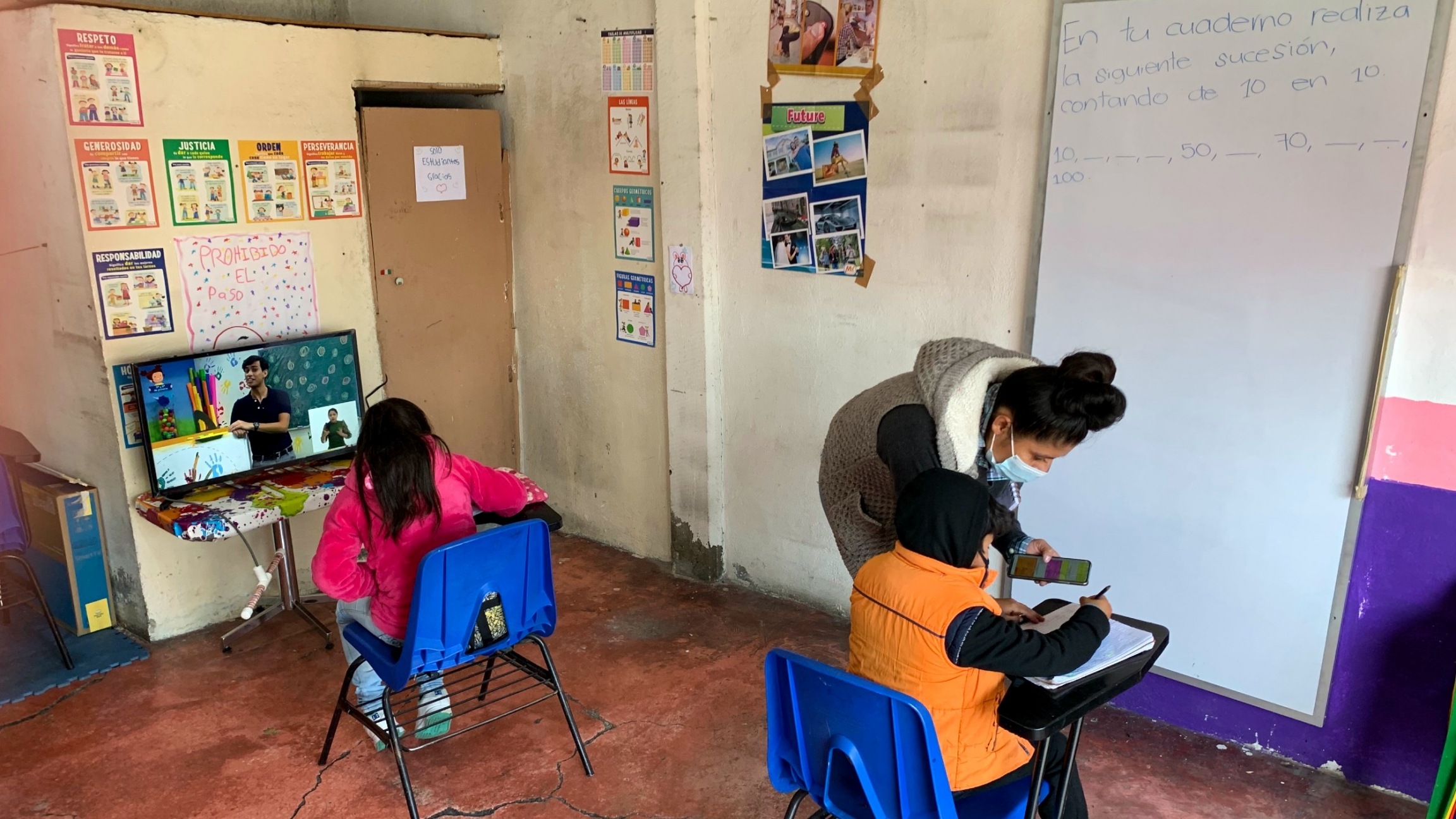 Dalia Davila, co-owner of La Abuela tortilla shop, helps Axel Carreño and Maria de la Luz Carreño at a space for students to use the internet and television for schooling.

Lozano and Davila have been grieving a family tragedy since February, when their seven-month-old infant, Leo, died of heart complications. So when the pandemic arrived, they began looking for ways to deal with their loss.

First, they handed out food to neighbors in need. When they realized many children in their neighborhood in the Mexico City borough of Tlalpan did not have access to the Internet — and thus were shut out of school — they began letting kids sit in their pickup truck and connect to their Wi-Fi to do their homework.

“Our baby died, and I was letting myself die,” Davila said. “Now we want other kids to have what he would have had.”

Davila’s neighbors were quickly overrun with empathy, hope and solidarity, she said. The owner of the convenience store next door closed his sidewalk to allow students to enjoy a pandemic version of physical education, and the owner of the hardware store down the block gave them food.

"The kids in our neighborhood are our kids, and we don’t want our kids to fall behind."

Eventually, Lozano and Davila set up a makeshift classroom. They received an anonymous donation and used the money to rent an empty storefront across the street, hooking it up with a television and a whiteboard. They also gave a few kids smartphones. 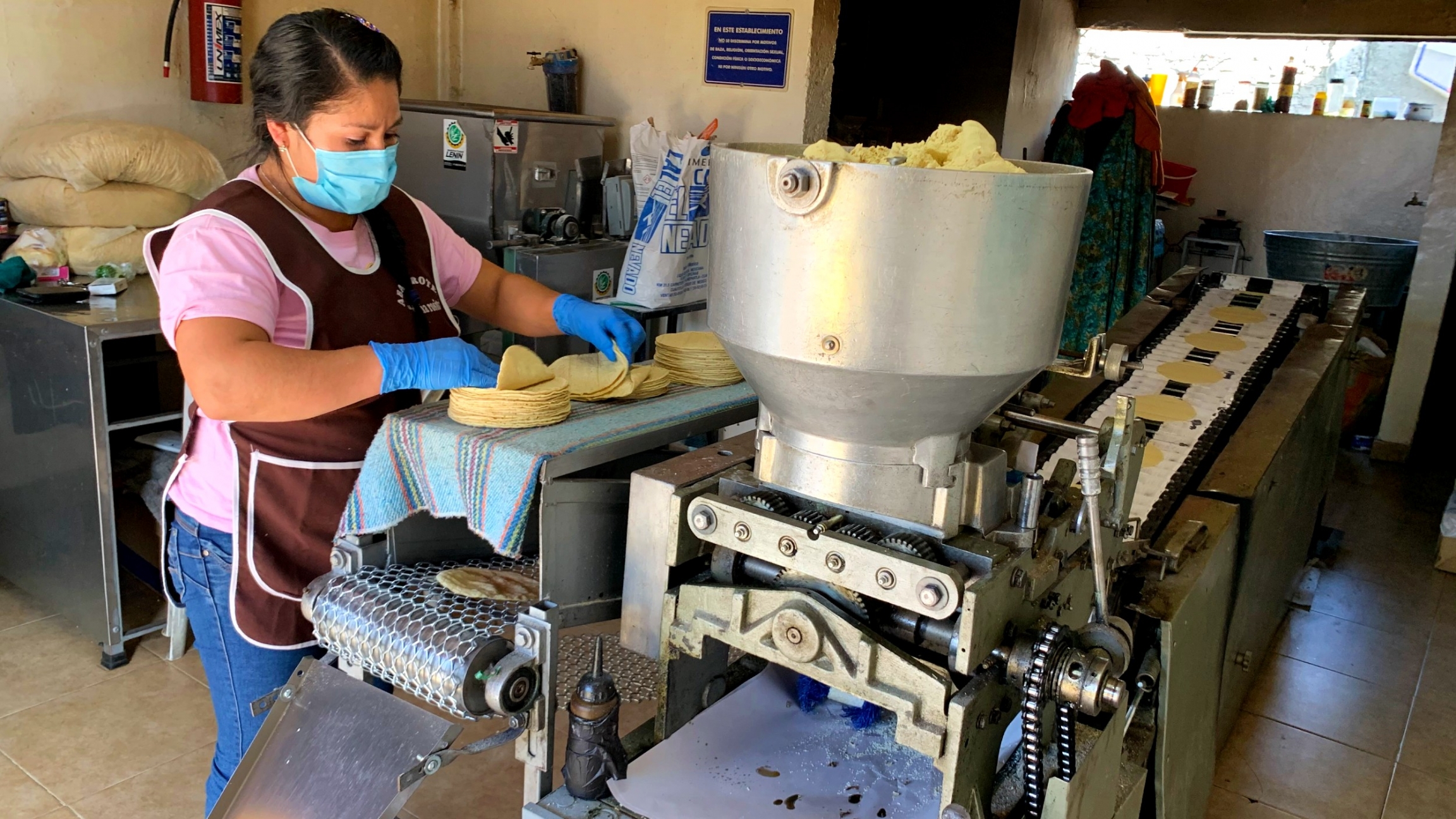 Marta Hernandez stacks tortillas coming out of the oven at La Abuela.

One mother who lives three blocks away, Dominga Ortiz, said her family has faced problems even more basic than her two daughters’ schooling. She works as a housekeeper and her husband as an electrician. But gigs have been scarce during the pandemic, she said. Sometimes they have no food to put on the table.

“We’re not the only ones,” Ortiz said. “A lot of people are going through a tough time.”

On a recent morning, 11-year-old Maria de la Luz Carreño and her two siblings received an English-language lesson from a volunteer tutor on basic greetings and how to count up to 20. Carreño delighted in learning a new language, but she missed math class at her school, she said.

Carreño’s favorite part of math was learning to multiply and divide, and to add and subtract with decimals. Yet, of course, she wanted to spend time with her classmates Yadira, Fernanda, Dulce and Alessandra, she said.

It’s been hard to stay in touch, Carreño added, and she doesn’t know how her classmates are managing to study. In the meantime, school for her is across the street from La Abuela tortilla shop.