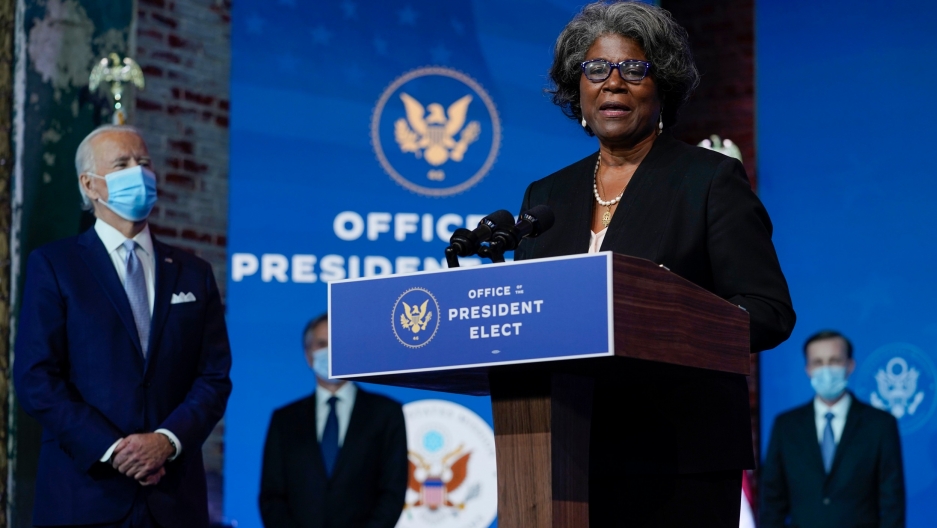 President-elect Joe Biden's pick to be US ambassador to the UN did not take what might be considered a typical path to international diplomacy.

Related: Blinken will 'repair some of the damage' to US diplomacy, says John Brennan

Linda Thomas-Greenfield grew up in segregated Louisiana, where the local Ku Klux Klan burned crosses in people's yards. Her father left school in third grade to help support his family. Her mother had an eighth-grade education.

She described her early days at Louisiana State University in a recent TEDx talk: "I was harassed in my dormitory. I had a world-renowned historian use the N-word regularly in a classroom. One of my professors gave me an F in a class, and when I asked why he had given me the F, he said to me, 'If you don't know the answer to that question, you don't need to be here.' But what he didn't understand was that failure was not an option for me."

Going on to excel in the US foreign service, Thomas-Greenfield spent 35 years there. She served as US ambassador to Liberia and directed the Bureau of African Affairs.

US ambassador Johnnie Carson often crossed paths with Thomas-Greenfield in his work as assistant secretary of state for African Affairs, as well as the US ambassador to Kenya, Zimbabwe and Uganda. Carson knows well about the adversity that Thomas-Greenfield often faced as she climbed the ladder in her career in the foreign service.

He spoke with The World's Marco Werman to share details on Thomas-Greenfield's appointment and the qualities his colleague possesses that will likely help her restore ties with global allies.

Marco Werman: Why do you think President-elect Biden's team chose Linda Thomas-Greenfield for this coveted position?

Amb. Johnnie Carson: She's capable, collegial and she's politically savvy. She is deeply respected for her views on the Hill, both among Democrats and Republicans. She will bring back a level of dignity and respect to the leadership at the UN mission. And I think that many of our partners there will welcome her diplomatic prowess and skills.

Linda Thomas-Greenfield's early years, as I mentioned, were full of adversity. Attending Louisiana State University when David Duke — who would go on to become the grand wizard of the KKK — was a student there at the time. How did those years impact her worldview?

Ambassador Linda Thomas-Greenfield is not easily rattled and very difficult to push around. She maintains her values and her principles and is willing to stand up and speak out when pushed the wrong way, or in the face of adversity.

She was stationed in Rwanda, notably in 1994, during the genocide there. And in her TEDx talk, she describes how she was almost caught up in the killing there, after being mistaken for a local Rwandan: "I was confronted by a glazed-eyed ... young man who had been given instructions to kill a woman by the name of Agathe. And he thought that I was Agathe. And interestingly, I didn't panic. I was afraid. Don't get me wrong. But I didn't panic. And I looked that young man in the eyes and I asked him his name and I told him mine. I wanted him to know my name because if he killed me, I wanted him to know the name of the person he'd killed." And, just a note to that: Agathe Uwilingiyimana— the woman she was mentioning — was eventually killed.

The person that that young man was trying to kill was in the adjacent house where Linda was staying. And she was, in fact, the country's prime minister. She died. So Linda faced death. And not many people come face-to-face with death overseas in front of armed men from a different military. Her life could have been taken not only in that instance but also as she was in one of the lead cars in a convoy leading out of the country with American citizens and embassy employees.

If confirmed, Ambassador Thomas-Greenfield would have a lot of work to do to change minds at the UN. The Trump administration has cut its UN contributions, withdrawn from agencies and global treaties. What will be her approach, do you think?

I think she will go about rebuilding ties with our closest allies. She will not be pushing an America-alone agenda. She will be working on behalf of an administration that believes that America is and should be a part of the responsible global community. There's no doubt in my mind that she'll work hard to restore American dignity and commitment to the importance of the United Nations as an instrument of helping to advance global peace and security, but also helping to advance a better world for everyone.