In early October, French President Emmanuel Macron unveiled the details of an upcoming law aimed at fighting what he called “Islamist separatism.”

In the aftermath of two recent, gruesome terrorist attacks in France, Macron said that Islam “is in crisis all over the world."

But the idea remains the same.

In essence, Macron wants the religion of Islam to fit with French republican values.

Related: Does the spirit of 'Je Suis Charlie' endure in France today?

“We need French intellectuals, French imams and French academics to interpret and to disseminate a modern interpretation of Islam,” said Hakim El Karoui, a Paris-based political consultant who has written extensively about the threat of Islamist extremism and the need to create a “French Islam.”

Many of El Karoui’s ideas have been incorporated into the proposed law, which will be debated in the French Parliament in early December.

Among other things, the law would monitor international funding coming into French mosques, crack down on online hate speech and create a special certificate program for French imams.

Karoui believes the majority of French Muslims would support the law.

In 2016, he conducted a survey of French Muslims and found that nearly half of them say they feel well adapted to French society. He calls them the silent majority.

“[Many French Muslims] consider religion a private matter. Their silence is included in the French model. This is the challenging thing. We have to help them to speak."

“They consider religion a private matter. Their silence is included in the French model. This is the challenging thing. We have to help them to speak,” Karoui said.

Karoui encourages this “silent majority” to make it clear to the rest of France that those committing extremist acts in the name of Islam are an aberration. 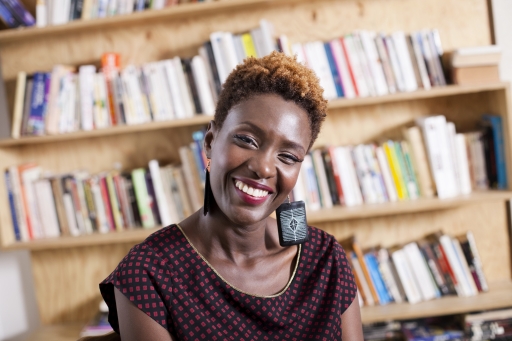 Rokhaya Diallo, a French journalist and filmmaker, disagrees with the notion that Islam itself needs reforming.

“Religion belongs to people who have faith and we have laws ... it’s not up to politicians, to the government to intervene and try and reframe a religion,” Diallo said.

At a time when France is under a national lockdown for COVID-19, and grappling with the grief from terrorist attacks, Diallo says Macron should be focused on bringing the country together — not singling out a religious minority, which she fears is only leading to more violence.

“Certain people are trying to use the momentum to evict people ... minorities who are speaking out against racism, against Islamophobia, to disqualify them," Diallo said.

She cites a recent protest organized by Génération Identitaire, a far-right organization described as a white nationalist group.

After last month’s attack at a church in Nice, the group immediately took to the streets waving banners that said: “Islam Get of Europe.”

At a market in the working-class Paris suburb of Bagneux, you’re just as likely to hear Arabic as French.

Most of the people The World spoke with at the market identified as Muslim.

The majority said they hadn’t heard much about this so-called separatism law.

“What is separatism?” one man responded when asked his opinion about the law.

A woman picking fruit nearby interjected.

“It’s a new law,” she said. “But it’s not really clear. It's pretty confusing, actually.”

The woman, who gave her name as Djamila, says she’s not sure if she’s for or against the law. But she really doesn't like the word “separatism.”

“This is what we say this for places that want to claim independence,” Djamila said. “It doesn't make sense here. French Muslims don’t want to be independent from the state. This word separatism gives the wrong impression.”

While the latest version of the bill no longer uses the word separatism, it’s still swirling around in people’s minds. 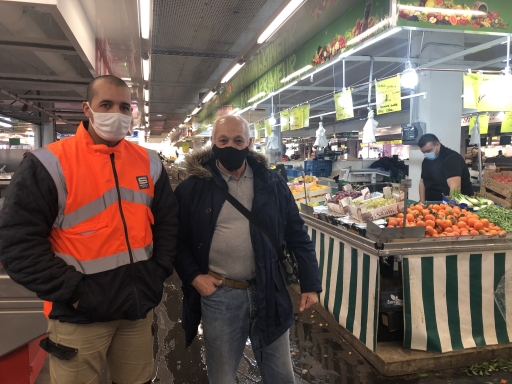 Abdel Hakim (left) and his friend Djilali, say the French government should be less preoccupied with the country's Muslim population and focus on responding to the coronavirus pandemic.

In another corner of the market, two men drank tea and shared a snack.

One of them was 30-year-old Abdel Hakim. He’s Algerian but has been living in France for more than half his life.

“In France, a lot of people love to hear what they want to hear — not what the person in front of them is actually saying,” Hakim said.

And Macron, he says, is no exception.

“I think Muslims are this country’s biggest preoccupation. We know we've never been liked and we never will be. So, we just continue to live our daily lives and don't think about politics too much.”

Regarding the proposed law, Hakim says he doesn’t think his opinion matters. Macron will do what he wants.

The president, Hakim said, “will have no trouble finding an audience to tell him exactly what he wants to hear about Islam.”