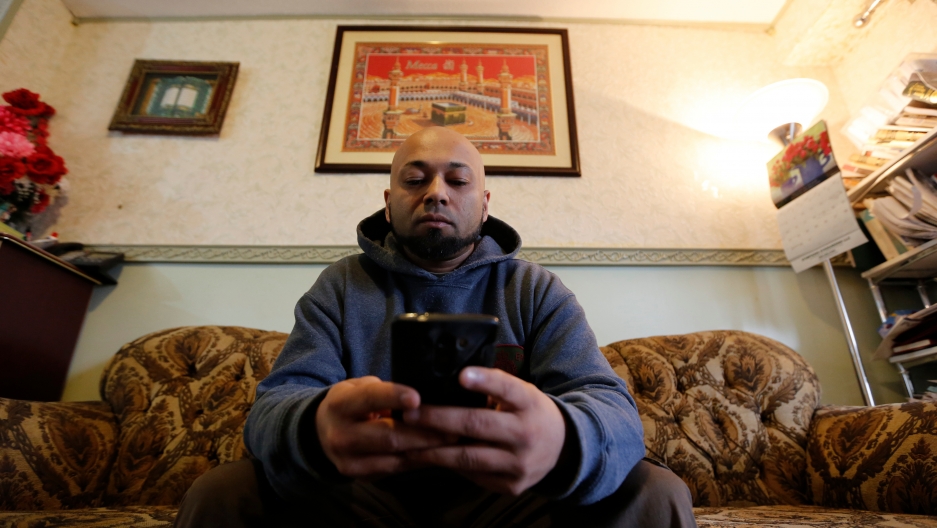 Mubin Shaikh, a former Taliban sympathizer who studies Muslim interventions in counter-radicalization, sits at his home in Toronto, May 15, 2016.

When Chérif Chekatt opened fire last month in the French city of Strasbourg at one of the most famous Christmas markets in Europe, five people were killed and about a dozen were injured.

The 29-year-old Strasbourg native with Moroccan roots was no stranger to authorities. He had spent several years in and out of prison and had a criminal record nearly as long as his age — 27 convictions for theft and violence in France, Germany and Switzerland.

It was during his time in prison that authorities believe he showed signs of practicing an extreme form of Islam, according to French Deputy Interior Minister Laurent Nunez, and put him on a watchlist designating him as potentially dangerous. During the Strasbourg attack, witnesses heard him shout “Allahu akbar” or “God is great” in Arabic, the Islamic affirmation of faith frequently yelled out by Islamic militants during terrorist attacks. CNN also reported that he had pledged allegiance to ISIS.

The pattern of prison radicalization is becoming all too common in Europe, warned Interpol’s Secretary-General Jürgen Stock in a speech to the Anglo-American Press Association of Paris on Dec. 19, 2018, shortly after the Strasbourg attack.

As hundreds of fighters return to France from fallen ISIS strongholds in Syria and Iraq, France faces a daunting task: Nearly 20,000 people are believed to be listed in government files as posing a potential security risk, including radicalization. Security agencies are especially concerned when convicts are released after having spent only a short amount of time behind bars.

“We could soon be facing a second wave of other Islamic State-linked or radicalized individuals that you might call ISIS 2.0,” Stock said. 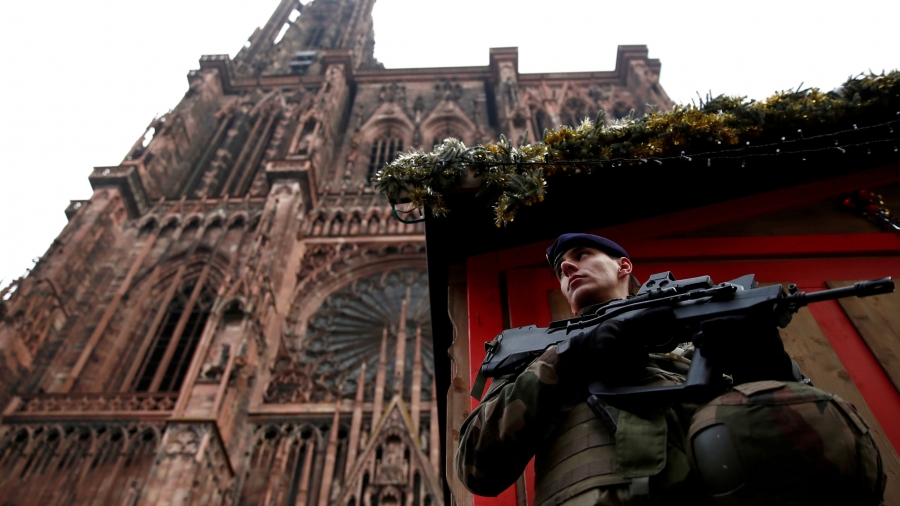 A French soldier stands guard near a closed wooden barrack shop at the traditional Christkindelsmaerik in front of the Cathedral the day after a shooting in Strasbourg, France, Dec. 12, 2018. The gunman, Cherif Chekatt, later shot dead by police, had shown signs of being radicalized by Islamic militants while in prison.

Related: British Parliament wants to shut down extremist content online — at what cost?

Prisons as 'incubators' for radicalization

Prisons can be “incubators” for radicalization, said Stock, head of the international police organization, at last month's press conference.

In some cases, prisons can be a place where convicts seek a form of redemption in religion and might drift toward a brand of radical Islam, believes Thomas Renard, a Belgian terrorism expert and researcher at the Egmont Royal Institute for International Relations in Brussels.

In other cases, Renard believes inmates “become friends with influential jihadis who recruit them ... while still others just seek the protection of a powerful group in prison, which can be the jihadi.” Renard is referring to those who hold extremist, Islamic views and believe in using violence to achieve religious and political ends.

But he was quick to caution against sounding the alarm over radicalization in prison. “We are not talking of entire prisons ‘radicalizing.’” Out of the 70,000 inmates in France, approximately 1,600 have been convicted of terrorism offenses or have been suspected of being radicalized, representing only 2 percent of the overall prison population.

Still, the Strasbourg shooter is just one in a line of convicted terrorists who are suspected of having developed extremist views while in jail. Anis Amri, the perpetrator of the 2016 Berlin Christmas market lorry attack, was a drifter from Tunisia who spent time behind bars for petty crimes in Italy and emerged with an extremist ideology.

Some European countries have recently increased their efforts to curb the spread of extremism in prisons.

In February 2018, the French government announced it would isolate extremists from the rest of the prison population by creating 1,500 separate spaces. France would also double the number of prison evaluation centers that monitor radicalization from three to six.

Mubin Shaikh, a former extremist who later went undercover to fight terrorism, believes much more needs to be done. 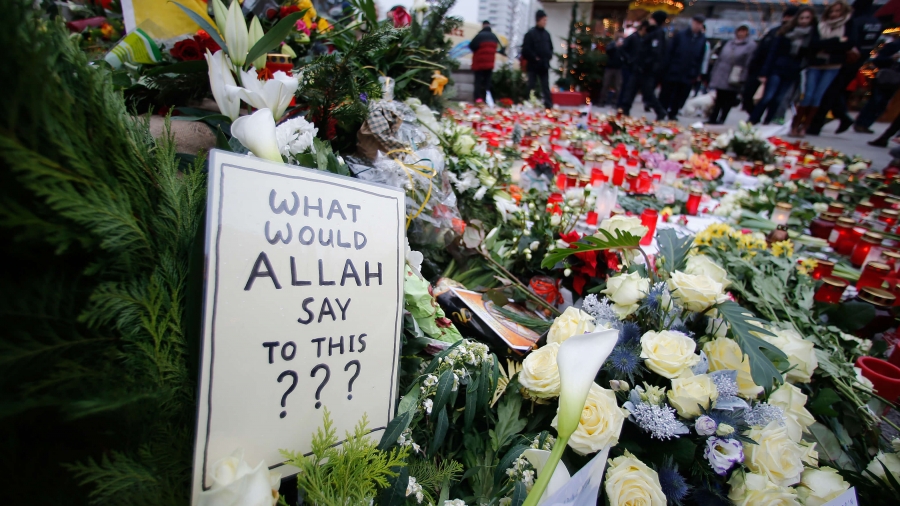 A card is placed next to flowers and candles, near the Christmas market at Breitscheid square in Berlin, Dec. 23, 2016, following an attack by Anis Amri, who ploughed his truck through a crowd at the market, killing 12 people. Amri was thought to have been radicalized with Islamic militant ideology while serving time for petty crimes in Italy.

“We lack programs to deal with this specific issue in prisons,” said Shaikh. “An individual who is incarcerated in prison, what kind of programs do they have access to? There’s not enough.”

Shaikh was born and raised in Toronto and struggled with his identity as a teen — clashing between his Canadian culture and that of his family’s Indian, Muslim background. In 1995, while in his 20s, he decided to “get religious” by going to Pakistan with Tablighi Jamaat, an Islamic missionary group.

Shaikh says an encounter with the Taliban, prior to their takeover of Afghanistan, led him to feel "enamored" with their views — that the way to bring about change is through jihad, or violent acts.

Related: He traveled to Syria to study Islam. He came back de-radicalized.

When Shaikh returned to Canada, he preached the same beliefs as the hard-line Islamic movement. Although he claims to have never carried out terrorist attacks himself, Shaikh admits that he fantasized about attacks in the West.

But after the terrorist attacks in the US on Sept. 11, 2001, he says his worldview began to unravel, leading him to eventually abandon his ideology for good. From 2004 to 2006, he worked undercover with the Canadian Security Intelligence Service to fight terrorism and was instrumental in bringing down the Toronto 18, an al-Qaeda inspired terrorist group.

According to Shaikh, more social programs need to be implemented in order to root out what he calls a “deviant interpretation” of Islam. In his view, introducing Islamic scholars who can communicate and openly debate with inmates would be effective in counseling and mentoring them.

“Thoughts precede action. How do you justify shooting random people in the street? Ideologically, they justify it by saying ‘they are infidels, infidels deserved to be killed.' That is a single line of argument that you have to attack,” Shaikh said, referring to the term used to describe nonbelievers — in this case, non-Muslims.

He said in order to attack this line of argument, Muslim scholars should explain scripture to inmates and show them that “Islam absolutely prohibits vigilante killing.” Shaikh also said the teachings relate to doing good and helping others should be emphasized.

While 9/11 was Shaikh’s wake-up call, his extremist views fully transformed after spending time in Syria with Islamic scholars for two years, from 2002 to 2004, just before he went undercover with the CSIS.

Related: For Sudan, breaking ties with its radical past is a ‘delicate balancing act’

“I felt I needed to study Islam more,” Shaikh said of the reason for his trip. While there, he realized that his interpretation of his religion was not aligned with the beliefs of the scholars under whom he studied. His worldview would soon completely shift.

Shaikh also believes in the importance of intelligence gathering within prisons through, for example, reliance on other inmates. In other words, jailhouse snitches — people in the prison system who are rewarded for providing intel on those suspected of having become radicalized.

But Shaikh said ultimately it was through the help of Islamic scholars who debunked his radical interpretations of the Quran that he finally changed his ideology. Religious figures who consulted and mentored Shaikh led to the complete abandonment of his extremist beliefs.

“Maybe we need more God in the prisons,” he said.