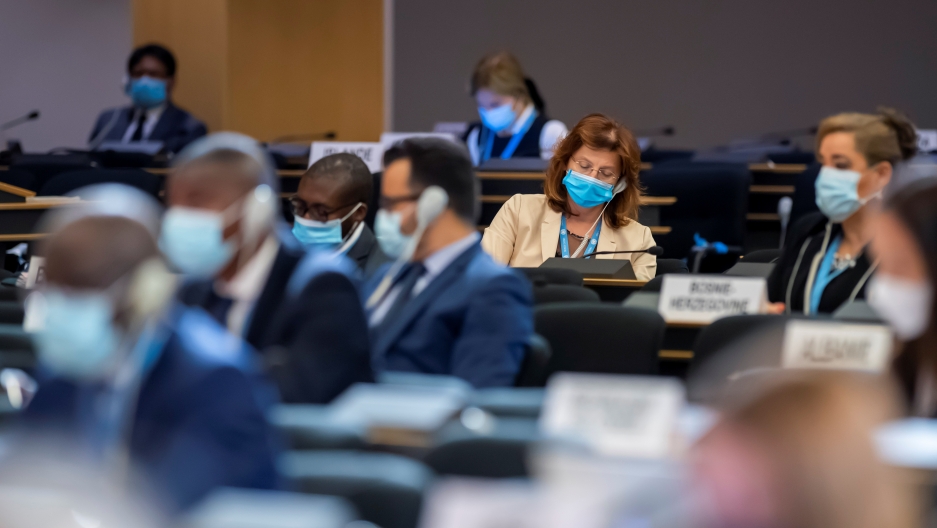 Delegates, wearing masks, listen to speeches during the 45th session of the Human Rights Council, at the European UN headquarters in Geneva, Sept. 14, 2020.

As the US finds itself at a crossroads between one president and another, the United Nations is conducting its regular review of where the US stands on human rights. The UN does a Universal Periodic Review every 4 1/2 years with each of its 193 member states.

Related: An American journalist was murdered in Turkey. Why didn’t the US investigate?

“As we witness a time of unprecedented degradation of human rights by authoritarian governments around the world, it is more important than ever to stand up to defend human rights and fundamental freedoms,” the US ambassador to the UN, Andrew Bremberg, said in his Nov. 9 presentation to the Human Rights Council on behalf of the Trump administration.

That’s how the Trump administration would like to be remembered, said JoAnn Kamuf Ward, director of the Human Rights in the US Project at Columbia Law School.

“There has been this ongoing narrative by Trump that the US remains a global human rights leader, while at the same time, we’ve seen the exact opposite.”

“There has been this ongoing narrative by Trump that the US remains a global human rights leader, while at the same time, we’ve seen the exact opposite,” she said.

This is the US’s third Universal Periodic Review. It’s supposed to be a rare opportunity for member countries to evaluate each other on progress toward the global body’s founding principles of human rights. The result is a set of recommendations by the evaluating countries. And while those recommendations aren't enforced, said Nicoletta Zappile of the Geneva-based group UPR Info, they did a study that shows they are surprisingly effective.

Representatives from the evaluating countries talked fast during the recent Human Rights Council meeting — they only got a minute each — and often prefaced by saying “with all due respect,” before picking the Trump administration’s narrative apart, listing the many ways the US doesn’t live up to its human rights obligations. Russia mentioned a big one: the Trump administration’s withdrawal from the UN Human Rights Council.

“The decision of the US to withdraw from the Human Rights Council showed once again the US reluctance to have a civilized conversation with the global community on human rights,” the Russian representative said.

Countries also talked about the US’s ongoing use of the death penalty, and its failure to address gun violence, gender pay disparities, housing discrimination, or universal health care, especially during the COVID-19 pandemic. The evaluating countries recommended the US to close Guantanamo, rejoin the Paris climate agreement, lift sanctions on members of the International Criminal Court and improve conditions for migrants. Nearly all the countries said that the US should take steps to investigate and punish police misconduct.

Conservatives see those recommendations as inherently flawed because they believe the UN is biased and politicized, said Brett Schaefer at the Heritage Foundation. He questioned a Human Rights Council that includes members accused of gross human rights violations, like China.

“For countries with such serious human rights problems to be so easily elected to sit on the Human Rights Council tells you a lot about how seriously other member states take the issue of human rights, and the desire that they have to actually advance human rights standards and principles in an objective way,” he said.

The Trump administration responded to some of the recommendations, including the comments about George Floyd. They said the protests following Floyd’s death this past spring led to “lawlessness.”

“It was with alarm and disbelief this year that we saw violent anarchists that we saw people set fire to other communities, kill innocent people and target law enforcement officers.”

“It was with alarm and disbelief this year that we saw violent anarchists that we saw people set fire to other communities, kill innocent people and target law enforcement officers,” said James McCament, deputy undersecretary at the US Department of Homeland Security, at the review.

JoAnn Kamuf Ward, of Columbia Law School’s Human Rights Institute, said that despite the Trump team’s presentation, the UN recommendations may still be an important roadmap for President-elect Joe Biden as he plans to rejoin the Human Rights Council and the global community.

“It will be really important when we have a new administration to be prepared with some really concrete and measurable actions [that are] aligned again with the globally recognized norms,” she said.

The Biden administration will ultimately be the one to accept or reject the recommendations since the US has until March 2021 to consider them.