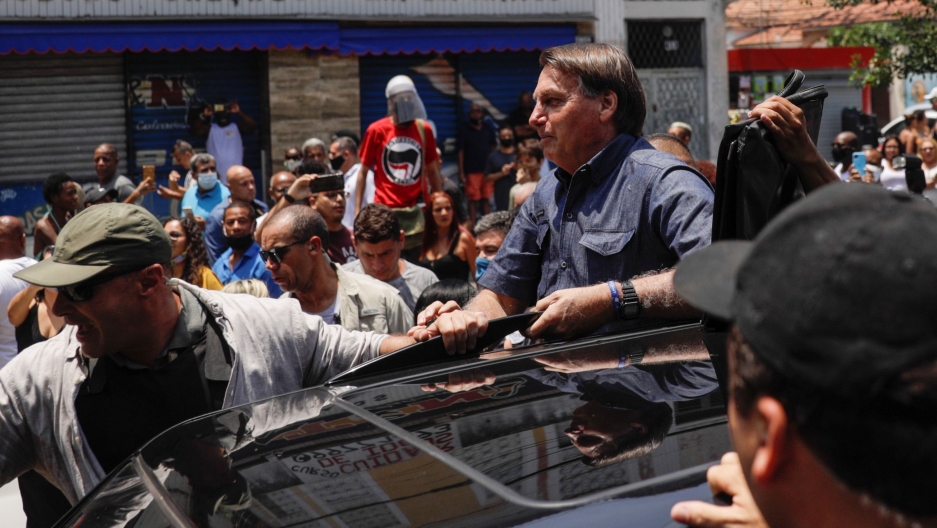 Marta Dalla Chiesa voted with her #EleNão T-shirt on. It was a bold move. Ele não means “not him” in Portuguese. The phrase was the rallying cry of the spontaneous, women-led campaign against the 2018 candidacy of Jair Bolsonaro that ignited millions to action.

Related: US election could have profound effect on Bolsonaro's Brazil

Two years ago, wearing a T-shirt like that to the polls could have drawn slurs, verbal attacks, or even a physical assault from an avid Jair Bolsonaro supporter, as violence and hate crimes spiked around the country. At this election, though, the political climate seemed to shift. Brazilians, voting for mayors and city councilors across the country, seemed to favor experienced politicians from traditional parties, a move that may damage reelection hopes for President Jair Bolsonaro.

A record number of LGBTQ candidates ran for local offices. Chiesa was pleased to see many victories for these candidates despite Jair Bolsonaro’s openly homophobic slurs and rhetoric, which the president was spouting even last week.

“I think we do have a bit more understanding from society that moved on from him, despite what his rhetoric is,” she told The World over WhatsApp, while the vote count was underway.

And Chiesa said she didn't get any flak for her shirt.

“I didn’t get any comments. I didn’t get any looks. So, for me, that’s a good sign,” said Chiesa, owner of the travel company Brazil Ecojourneys and the former president of the Brazilian LGBT Tourism Association.

Monica Benicio was one of those candidates who were able to celebrate on Sunday. She is the widow of the late, Black City Councilwoman Marielle Franco, whose killing in 2018 sparked nationwide protests and a Black Lives Matter movement in Brazil.

Even Pink Floyd’s band member, Roger Waters, sent an impassioned appeal to vote on her behalf. Benicio won a seat on the Rio de Janeiro City Council in Sunday’s local elections, receiving nearly 23,000 votes. She’s considered the council’s first openly lesbian Rio de Janeiro representative and is one of a number of LGBTQ candidates who secured seats around Brazil, including two transgender women who garnered some of the highest numbers of votes in São Paulo.

Duda Salabert is the city councilwomen who received the most votes in the history of Belo Horizonte, today, in #Brazil's local elections. She is a teacher, transvestite, vegan & environmental activist. https://t.co/PFW9PaKwpe

It may be a sign of Bolsonaro's waning influence. During his almost daily Facebook Live events in November, Bolsonaro encouraged supporters to vote for numerous candidates, most of whom lost. In São Paulo, Bolsonaro’s pick, Celso Russomanno, came in a dismal fourth place after leading early polls.

One centrist party openly rejected Bolsonaro’s support for a mayoral candidate in a city in northern Brazil, saying it was “unwise” considering what was happening to “candidates supported and identified with Bolsonaro.” That candidate also came in fourth.

“It seems Bolsonaro has lost his charismatic political power. 2020 has squashed the popularity of the president, which should increase the political difficulties for Bolsonaro for the coming years ahead of the 2022 presidential elections.”

“It seems Bolsonaro has lost his charismatic political power,” said Jacques Mick, a political scientist at the Federal University of Santa Catarina. “2020 has squashed the popularity of the president, which should increase the political difficulties for Bolsonaro for the coming years ahead of the 2022 presidential elections.”

It doesn’t help that Bolsonaro no longer has a party. He left his Social Liberal Party late last year, with plans to form a new far-right party, which he called Alliance for Brazil. But he couldn’t get it registered fast enough to compete in this year’s elections.

That didn’t dissuade dozens of supporters from trying to cash in on his name. More than 40 candidates registered to run in local elections with Bolsonaro in their names — Brazilians are allowed to include their nicknames on the ticket.

Among them was a candidate named “Rafa Bolsonaro Supporters,” who held an hourlong Facebook Live event on Saturday from the back of a pickup truck. He was part of a caravan riding in support of his campaign for city council in a hillside town near Rio de Janeiro. In the video, he wears a blue shirt with the silhouette of Bolsonaro’s face etched across the front.

There was even a “Donald Trump Bolsonaro” in a small town in southern Brazil, though a local electoral court disqualified him from running because he couldn't prove that he was actually known by that name.

That, however, doesn’t mean the country's political right is losing speed.

“Even though the icon of the right, President Bolsonaro, has been defeated or his candidates did not do well, in general, the right is well-positioned, with even more robust compositions than the left at this moment.”

“Even though the icon of the right, President Bolsonaro, has been defeated or his candidates did not do well, in general, the right is well-positioned, with even more robust compositions than the left at this moment,” Mick said.

But the election wasn’t a blowout for the right. Despite media reports to the contrary, the Workers’ Party held ground. The progressive Socialism and Liberty Party, PSOL, which grew out of the Workers Party in the early 2000s, picked up important seats across the country. And it tripled its city council members in São Paulo.

Supporters cheered for PSOL mayoral candidate Guilherme Boulos, the leader of the Homeless Workers' Movement after he voted on Sunday. Boulos is headed for a runoff with center-right incumbent Mayor Bruno Covas.

Boulos has been on the receiving end of a campaign of attacks and fake news looking to smear his reputation. So has Manuela D’Avila, a young, charismatic Communist Party candidate, who is also headed for a mayoral runoff election in Porto Alegre, the southernmost state capital.

“For all of you listeners, I’m so sorry that you have been victims of this campaign of so many attacks, so many lies, so much disqualification and so much machismo. This is political gender violence. That’s what us women call what I am being subjected to.”

“For all of you listeners,” she told supporters last week, “I’m so sorry that you have been victims of this campaign of so many attacks, so many lies, so much disqualification and so much machismo. This is political gender violence. That’s what us women call what I am being subjected to.”

D’Avila is fairly high profile — she was the vice-presidential candidate for the left against Jair Bolsonaro in 2018. Last week, a regional court ordered that 91 links to false claims about her be taken down from social media sites.

According to reports, fake and misleading posts about D’Avila were shared 529,075 times over social media.

“Manuela personally became the target of a campaign of attacks, lies, and defamation throughout the campaign,” said Marcelo Kunrath, a sociologist at the Federal University of Rio Grande do Sul. “This type of dirty campaign continues to be very attractive for some groups in the electoral process in Brazil.”

It’s a sign that even if Bolsonaro’s influence is waning, the smear tactics that were rolled out in his presidential campaign and used by the far-right are still being employed. And they are likely to continue as Brazilians look toward the runoff elections later this month and to 2022 when Bolsonaro will do his best to win a second term.