In mid-August, dozens of Kayapó Indigenous warriors blocked a highway in Brazil’s Amazonian state of Pará, demanding action from the government to stop the spread of COVID-19 in their territories and condemning a recent influx of outsiders.

People seeking to log, mine or seize Indigenous land have dramatically increased deforestation in Kayapó areas during the pandemic.

A week after the protest, gunmen attacked a checkpoint established by another group of Kayapó to protect their village. The outlaws fired 30 shots, though no one was harmed.

Despite the increase in tensions, Brazilian officials say they’ve been working to defend Indigenous peoples and have delivered thousands of hygiene kits and basic food baskets.

“We are protecting Indigenous communities and stopping outsiders from entering their lands and convincing them not to leave their territory,” General Alexandre Ribeiro, the commander of the military’s COVID-19 operation, told state TV in June.

But many Indigenous peoples say they have been neglected by the Brazilian government during the pandemic.

‘Not even a mask’

“In the beginning, our communities didn’t even receive medicine. Not even a mask. And sometimes medical teams went to communities and infected our people,” said Mario Nicacio, who helps lead the Network of Indigenous Organizations of the Brazilian Amazon (COIAB), one of the largest Indigenous umbrella groups in the region.

By the end of May, the country’s Indigenous agency, FUNAI, had spent only 18% of its funds allocated for protecting native communities from COVID-19.

According to a report released last month by Brazil's Socioeconomics Studies Institute, the government has actually spent less on Indigenous health care during the pandemic than it did last year during the same period.

“Our conclusion is that we are facing a paralysis of the state, but a paralysis that is constantly denied by the administrators,” said Leila Saraiva, one of the study’s authors. “It’s shocking, because we know how serious this is for Indigenous communities.” 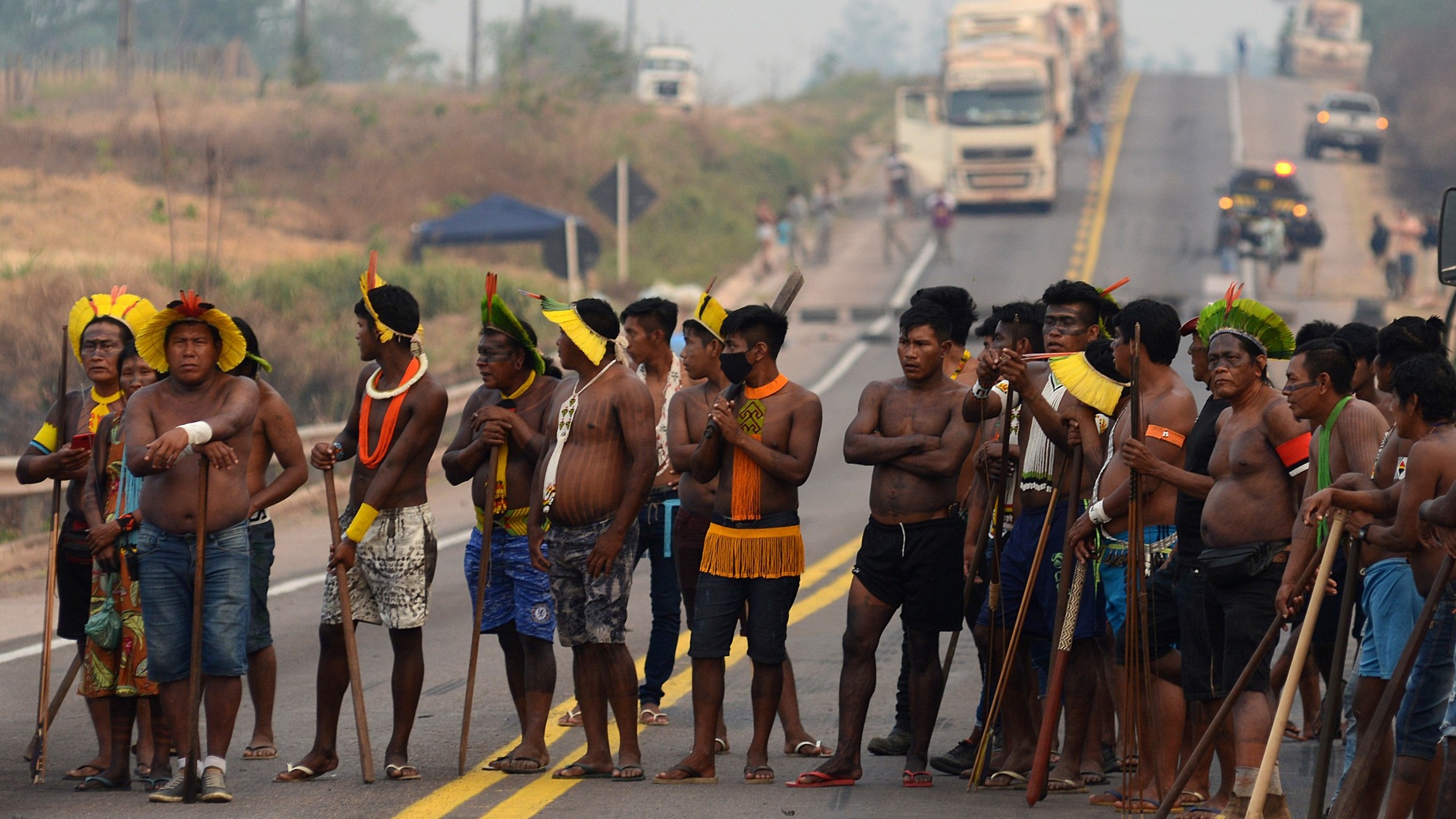 Indigenous groups in Brazil remain vulnerable to the spread of the coronavirus, which has driven them to take matters into their own hands.

Meanwhile, Brazil’s Supreme Court has been demanding action from the government to protect indigenous communities from both COVID-19 and outsiders looking to profit from the land.

“We are all in agreement that we had to deal with the question of the invasions, and we need to remove them. And we will focus energy on a plan with a possible schedule to achieve those goals,” Justice Luis Barroso said in August.

This week, Barroso approved a government plan to set up health checkpoints along roads into many Indigenous areas to slow the spread of the virus and block outsiders. But the government says implementation won’t happen until December.

‘Spreading in the air’

Meanwhile, Brazil’s Indigenous communities have been forced to take action since the beginning of the pandemic. COAIB began rolling out its COVID-19 emergency plan just weeks after the virus arrived.

“We acquired personal protective equipment, medicine and even quick tests for COVID-19,” Nicacio said. “We had to buy them, because the federal government was not yet testing Indigenous people. And we have been setting up primary health clinics in communities.”

They also helped spread the word across communities about how to defend against the virus.

“We acquired personal protective equipment, medicine and even quick tests for COVID-19. We had to buy them, because the federal government was not yet testing Indigenous people.”

“We’ve been here since 4:00 a.m., after we made the decision to close our road into the community, in order to defend against this virus that has been spreading in the air and across the world,” said Pataxó chief Jovino Braz, in a YouTube video posted in May.

In the clip, he’s joined by nine members of the village, who have created what they call a “sanitation barrier.” It’s essentially a checkpoint, where they only let people pass who they trust. The Indigenous villagers are all wearing face masks, and they’re armed with bottles of soap and detergent, to make sure visitors are disinfected before they pass.

Barriers like this have been erected by native communities across Brazil.

APIB, the country’s largest Indigenous organization, has launched its own emergency plan and an international campaign to mobilize support and funds for its COVID-19 defense work.

“We want to create alternative places where infected people can be isolated,” said Sônia Guajajara, a well-known Indigenous activist and the leader of the organization, during a three-hour live launch of the publicity effort on August 9. “We need to guarantee primary medical attention in the communities so that our people don’t have to be taken to the hospitals in the city.”

The problem — as she and many others point out — is that Brazil’s Indigenous peoples aren’t just facing COVID-19. They’re also confronted by land invasions, deforestation, massive forest fires and constant challenges with government officials to assert their rights.

But they say the strength of the planet depends on their survival. And they have promised to fight.

“We will not be silent,” Nicacio said. “Indigenous lives are at stake.”