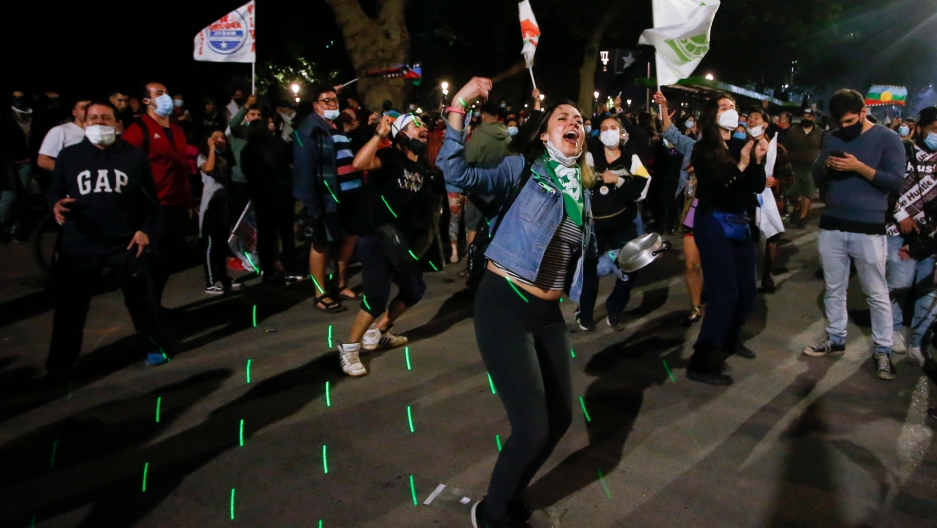 People gather at Plaza Italia on the day Chileans voted in a referendum to decide whether the country should replace its 40-year-old constitution, written during the dictatorship of Gen. Augusto Pinochet, in Santiago, Chile, Oct. 25, 2020.

Voters in Chile turned out Sunday and overwhelmingly approved of having a constitutional convention draft a new charter to replace guiding principles imposed four decades ago under the military dictatorship of Gen. Augusto Pinochet.

The country's conservative government had agreed with the center-left opposition to allow the vote after the outbreak of vast street protests that erupted a year ago in frustration over inequality in pensions, education and health care in what has long been one of South America's most developed nations.

The Electoral Service said Sunday night that with nearly all polling stations reporting, about 78% of the 7.4 million votes counted favored drawing up a new constitution, while just under 22% were opposed. About 78% supported having the charter be drafted by a convention of 155 elected citizens rather than a convention with half its members elected citizens and half members of congress.

In a speech to the country, center-right President Sebastián Piñera said acknowledged the victory for those seeking a new charter but cautioned it is only the start of a long process.

"It is the beginning of a path, which together we will have to go through to agree on a new constitution for Chile," said the president, who had opposed having a new constitution though he had conceded earlier in the day that it likely would be supported by voters.

The special convention would begin drafting a new constitution that would be submitted to voters in mid-2022.

As Piñera spoke, thousands of people celebrated in a central square of the capital used for festivities and protests. Similar gatherings were held on the outskirts of Santiago.

"What happened in the social outburst is now reflected in the outcome of the plebiscite," said one celebrant, Paulina León. "I was part of the marches a year ago and I have to take care of my decision and help build a dignified constitution."

Felipe Caviedes also joined in, saying that "I am part of the social diversity that was marginalized 30 years in this country and now, at last, we can create it ourselves. Now there are real changes coming."

Chile's current constitution was drafted by the dictatorship of Gen. Augusto Pinochet, and was sent to voters at a time where political parties had been banned and the country was subject to heavy censorship.

It was approved by a 66%-30% margin in a 1980 plebiscite, but critics say many voters were cowed into acceptance by a regime that had arrested, tortured and killed thousands of suspected leftist opponents following the overthrow of an elected socialist government.

"I think that many people went to vote out of fear," said political scientist Claudio Fuentes, who wrote a book about that plebiscite titled, "The Fraud."

"The current constitution has a flaw of origin, which is that it was created during the military dictatorship in an undemocratic process," said Monica Salinero, a 40-year-old sociologist who supports drafting a new charter.

The free-market principles embodied in that document led to a booming economy that continued after the return to democracy in 1990, but not all Chileans shared.

A minority was able to take advantage of good, privatized education, health and social security services, while others were forced to rely on sometimes meager public alternatives. Public pensions for the poorest are just over $200 a month, roughly half the minimum wage.

Luisa Fuentes Rivera, a 59-year-old food vendor, said hopes that "with a new constitution we will have better work, health, pensions and a better quality of life for older people, and a better education."

But historian Felipe Navarrete warned, "It's important to say that the constitution won't resolve the concrete problems. It will determine which state we want to solve the problems."

Claudia Heiss, head of the political science department at the University of Chile, said it would send a signal about people's desires for change, and for a sort of politics that would "allow greater inclusion of sectors that have been marginalized from politics."

Conservative groups fear the revamp could go too far, and endanger parts of the constitution that have helped the country prosper.

"The people have demonstrated saying they want better pensions, better health, better education. and the response of the political class" is a process that won't solve the problems and will open a period of uncertainty," said Felipe Lyon, 28-year-old lawyer and spokesman for the group "No, Thanks" that opposes the change.

The decision to allow the vote came after hundreds of thousands of Chileans repeatedly took to the streets in protests that often turned violent.

The vote was initially scheduled for April, but was delayed due to the COVID-19 pandemic which has killed some 13,800 Chileans, with more than 500,000 people infected by the new coronavirus.

Officials trying to ensure voters felt safe barred infected persons or those close to them from the polls, and long lines formed at voting places. Voters had to wear masks — dipping them only briefly for identification purposes — and brought their own pencils.