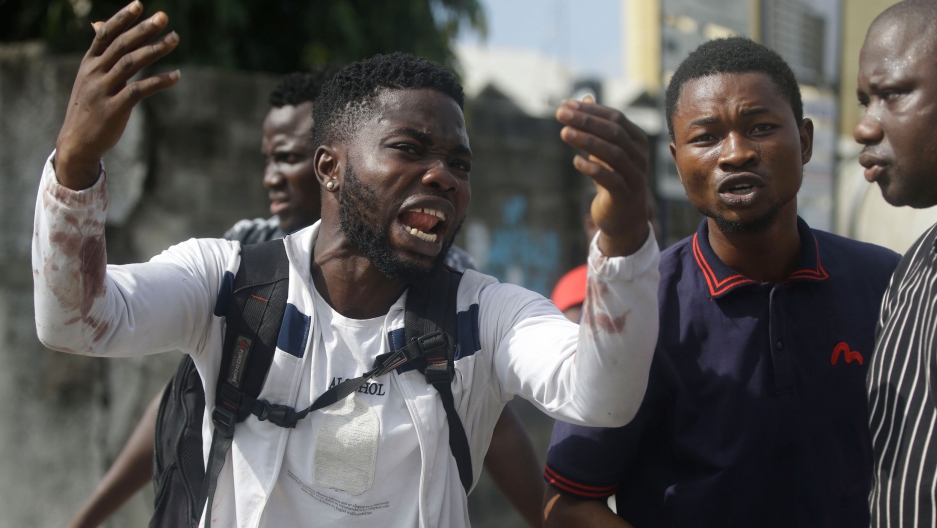 A protester reacts while speaking to the Associated Press near Lekki toll gate in Lagos, Nigeria, Oct. 20, 2020.

Nigerian protesters defied a curfew on Wednesday demanding an end to police brutality as gunfire rang out, a day after shots were fired into a crowd of demonstrators singing the country's national anthem. That disturbing turn drew global outrage.

It's not clear if any protesters were killed in Tuesday night's shooting at the Lekki toll plaza in the West African country's sprawling commercial capital. Lagos' governor said many were injured but no one was killed, but Amnesty International had earlier said there were fatalities and that it had "credible but disturbing evidence" that security forces were responsible.

Gunfire reverberated across Lagos on Wednesday, including at the Lekki toll plaza, where young demonstrators were rallying again despite an order for everyone to stay off the streets until further notice. At the sound of the shots, some protesters could be seen running away, though it wasn't clear if the crowd was fired upon.

Police also fired tear gas at one point, and smoke could be seen billowing from several areas in the city's center. Two private TV stations were forced off the air at least temporarily as their offices were burned.

Demonstrations and gunfire were also reported in several other Nigerian cities, including the capital city, Abuja.

Young people have taken to the streets for more than two weeks after anger over heavy-handed policing flared in response to a video of a man being beaten, apparently by officers with the Special Anti-Robbery Squad, known as SARS.

In response to the #EndSARS movement, the government announced it would disband the unit, which Amnesty International says has been responsible for many cases of torture and killings. But that has failed to satisfy demonstrators, who are now demanding more widespread reforms to end human rights abuses committed by security forces of all stripes and pervasive government corruption.

Though Nigeria has massive oil wealth, and is one of Africa's largest economies, many of its 196 million people face high levels of poverty and lack of basic services — because of rampant graft, according to rights groups. Nigerians have flooded Twitter in recent weeks with accounts of the everyday indignities and outright abuse they face, from being regularly shaken down by police for bribes to beatings and even killings.

But their demands for better governance drew new attention both inside and outside the country after videos were posted on social media in which gunfire could be heard echoing over protesters as they sang the national anthem at the Lekki toll plaza in the darkness Tuesday night. After the shots, people can be heard running away.

It's not clear who was firing, but Amnesty International accused the police and military of using excessive force against the demonstrators. It did not say how many people were killed, but it has previously blamed 10 deaths during the protests on Nigeria's security forces. There have also been widespread reports of the youthful protesters being attacked by armed gangs, who the demonstrators say are sent by the police.

The Lagos governor Wednesday confirmed more than 20 injuries from the Lekki shootings, but said that no one had been killed. He said he went to hospitals and mortuaries throughout the city.

Speaking in a televised address, Gov. Obajide Sanwo-Olu said he has ordered an investigation into the actions of the military at Lekki plaza, an indication that the army may be responsible.

"This is with a view to taking this up with a higher command of the military and to seek the intervention of Mr. President in his capacity as a commander in chief to unravel the sequence of events that happened yesterday night," he said.

"This is the toughest night of our lives as forces beyond our direct control have moved to make dark notes in our history, but we will face it and come out stronger" the governor tweeted earlier Wednesday.

He had also warned on Twitter that the protests against police brutality had "degenerated into a monster that is threatening the well-being of our society."

Nigeria's military, however, denied responsibility for the Lekki shootings, posting a tweet that labeled several reports as fake news.

President Muhammadu Buhari — who has said little about the protests engulfing his country— did not mention the Lekki shootings but in a statement Wednesday issued a call for calm and vowed police reforms.

Buhari's statement said the dissolution of the SARS unit "is the first step in a set of reform policies that will deliver a police system accountable to the Nigerian people," and said his government is committed to "the implementation of lasting police reforms in Nigeria."

Nigeria's spiraling crisis has drawn international attention, including from US presidential candidate Joe Biden who denounced the shootings.

"I urge President Buhari and the Nigerian military to cease the violent crackdown on protesters in Nigeria, which has already resulted in several deaths," wrote Biden. "My heart goes out to all those who have lost a loved one in the violence. The United States must stand with Nigerians who are peacefully demonstrating for police reform and seeking an end to corruption in their democracy."

Before the shootings at Lekki, Nigeria's police statement warned that security forces would now "exercise the full powers of the law to prevent any further attempt on lives and property of citizens."

The Inspector-General of Police said it was deploying anti-riot police across Nigeria and ordered forces to strengthen security around correctional facilities.

The curfew in Lagos began Tuesday afternoon and most businesses and shops are closed across the city, but the demonstrators are erecting barricades in the streets. The curfew was announced after a police station was burned down in the city and two people were shot dead by police.

Lagos has been the center of the protests, with demonstrators at times blocking access to the airport and barricading roads leading to the country's main ports.

By Sam Olukoya and Lekan Oyekanmi/AP