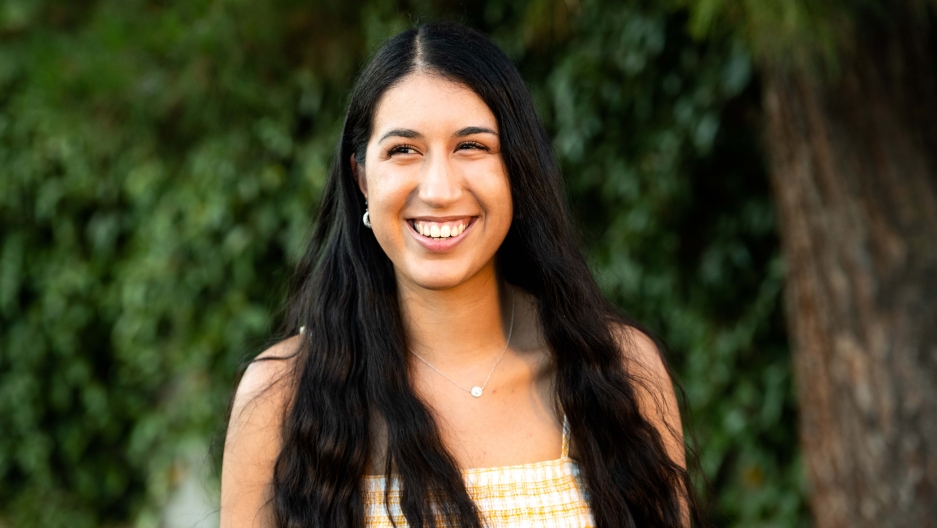 Adela Diaz, who will be a first-time voter in 2020, is shown at home in Phoenix.

Early voting kicked off on Wednesday in Arizona, a battleground state in an election like no other. Both parties are making their final push for voters, with Republicans knocking on doors and Democrats hosting virtual events.

But among the state’s Latino voters, pollsters say, both parties have lagged in terms of outreach. Another criticism is that they treat Latinos as a monolithic voting bloc instead of viewing them as individual voters with their own specific issues.

Latino voters are a crucial and fast-growing voting bloc nationwide. Approximately every 30 seconds, a young Latino in the US turns 18 and becomes eligible to vote. Latinos are changing the demographics of states like Arizona, which until recently was a safe bet for Republican presidential candidates. It is now home to some 1.2 million eligible Latino voters, making it the US state with the fifth-highest number of Latino voters. And their choices in battleground states like Arizona could decide the presidency.

Adela Diaz, a 19-year-old Latina in Tucson, has already made up her mind. The first-time voter and college sophomore at the University of Arizona plans to cast her ballot this week for Democratic candidate Joe Biden.

Related: Health disparities are top of mind for this Latina student voter

Earlier this year, she voted for former Democratic candidate Sen. Elizabeth Warren in the Arizona primary. Then, she hoped Sen. Bernie Sanders would win the race for Democratic nominee. Now, Diaz says, she’s not so much voting for Biden as she is against President Donald Trump — whom she says let the US down during the coronavirus pandemic.

“At first, I just assumed America’s got it. We got this. There’s a virus in China. There’s a couple of cases here. Ebola got here. It was fine. I just assumed it was going to be contained, not an issue,” Diaz said.

She says she initially thought the president’s warlike rhetoric from this spring would unite the country against the pandemic.

Instead, she says, Trump worked to divide the country along its fault lines — on everything from race to masks.

“That man can’t represent me. He doesn’t even want to. He would never have me in mind as someone who he’s asking policies and fighting for. He wouldn’t even pretend.”

“That man can’t represent me. He doesn’t even want to,” she said. “He would never have me in mind as someone who he’s asking policies and fighting for. He wouldn’t even pretend.”

The pandemic has changed her life drastically. Back in February, she was attending classes in person. Throngs of students strolled the campus. They filled the seats of the outside patios on their lunch breaks. They played Frisbee on the main lawn. Arizona’s totemic saguaro cacti were showing the first indications of a spring bloom.

Nine months later and all that changed. One million people have died of the virus worldwide, including more than 210,000 in the United States. Adela’s own life was upturned, her college years reduced to an apartment, a packed schedule of classes on Zoom, and a laptop.

Now, she rarely goes to campus, where even gathering in small groups is banned.

Though Diaz knows who she will vote for, the voters Trump and Biden are fighting for in Arizona are a huge bloc of voters who may still be undecided.

Among Latinos, polls find Biden ahead, sometimes 2 to 1. He has been running an ad in Arizona extolling Latinos in critical industries, saying: “In the midst of this god-awful pandemic, we’ve seen more clearly than ever how much we rely on people with Hispanic roots to keep our country running.”

Diaz has been consistent about what she wants in a sitting president: someone who supports universal health care.

Her roommate, Alexa Basualdo, will ultimately specialize in nuclear medicine. Like Diaz, the Texas native is voting in her first presidential election.

“He was very particular with his vice president candidate,” Basualdo said of Biden. “He was very methodical about it. He really wanted to please the voters. And that tells me that he’s listening to us. So, that gives me some hope.”

With mere weeks to go until Nov. 3, Diaz has never been more clear that she wants Trump voted out after his first term.

She is also hoping for a vaccine.

“But especially I’m hoping that someone who’s in charge of this focuses on low-income areas to distribute it,” Diaz said.

Adela’s been consistent in her wishes during an inconsistent political year: Erasing health inequalities is her top priority.