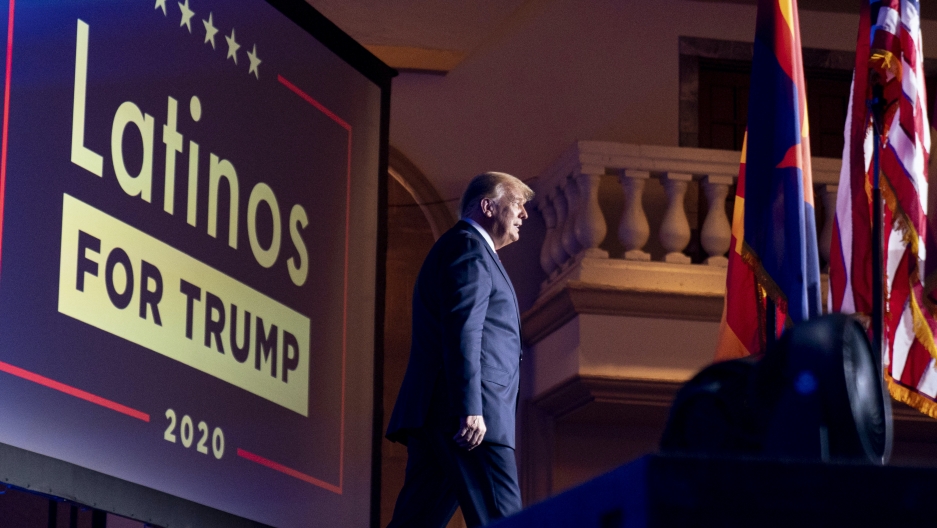 With just weeks left before the 2020 presidential election, both candidates are making a push for Arizona, particularly Latino voters in Arizona.

“From restaurants to places for us to gather, we know that you are the backbone of this state, and we’re deeply grateful to have all of you here today,” she said in her prepared remarks to business owners.

And Monday, President Donald Trump rallied at a "Latinos for Trump" event in Phoenix. It was his fifth visit to the state this year.

Arizona is getting a lot more attention from presidential candidates than it did during the 2016 race. That’s because its voters look very different than they did just a few years ago.

Arizona has 1.2 million eligible Latino voters, making it the US state with the fifth-highest number of Latino voters. Aggressive voter outreach created the state’s largest Latino turnout ever for the 2018 midterm race. Until then, Arizona hadn’t had a Democratic senator in 40 years. Now, even its second Senate seat is a tossup between the two parties.

Related: How Puerto Ricans in central Florida may decide the US election

Chuck Coughlin, a Republican strategist, says Trump is seeking to deepen his support among established Latino immigrants and their descendants in Arizona who are already voting Republican. Trump has already tried to appeal to them at events in Arizona and on the national stage.

“It’s ‘I’m a businessman, I came here legally, this is my American dream.’ It’s going to be that,” Coughlin said of Trump’s pitch to Latinos.

“You’re not having a policy debate here. This is not a high-minded policy debate. It’s ‘That guy locked up children in cages. That guy is evil. He’s awful.’”

Coughlin warns that Trump will need to win Arizona’s biggest county, Maricopa, in order to win the state. But the Republican Party’s once-dominant support among Arizona registered voters has dwindled to half of what it was in 2012.

Meanwhile, Democrats are trying to recreate that 2018 turnout by reaching young voters and women who tend to vote Democratic.

The prominent activist group LUCHA just launched an effort to bring 1 million Arizona voters to the polls this year. Organizer Ricardo Zamudio downplayed criticism that Joe Biden hasn’t been doing enough to attract Latinos. And that he doesn’t have the draw to young Latino voters.

“We may not have the Bernie Sanders or the Elizabeth Warren, but I think we do have the opportunity that otherwise with Donald Trump we wouldn’t have,” he said of previous Democratic candidates that garnered more enthusiasm among Latinos.

The efforts of the Republican Party’s old guard, who were right-wing immigration hawks that dominated Arizona’s politics 10 years ago, led to the recent push to turn the state Democratic.

Adela Diaz, a first-time voter and public health major on an academic scholarship at the University of Arizona, says even before the pandemic, her biggest issue as a voter was a lack of universal health care in the US.

Related: Health disparities are top of mind for this Latina student voter

But she’s less than enthusiastic at the option she faces come Nov. 3.

“I think it’s because the Democratic party is good enough. Not because it’s the one that inspires all of us to go out and vote,” she said.

She’s not impressed. Biden’s plans don’t include a universal healthcare plan — something dear to her.

“I don’t see myself putting a Democratic party sticker on my car. Maybe a 'Feel the Bern' sticker. That’s more up my alley, I guess.”