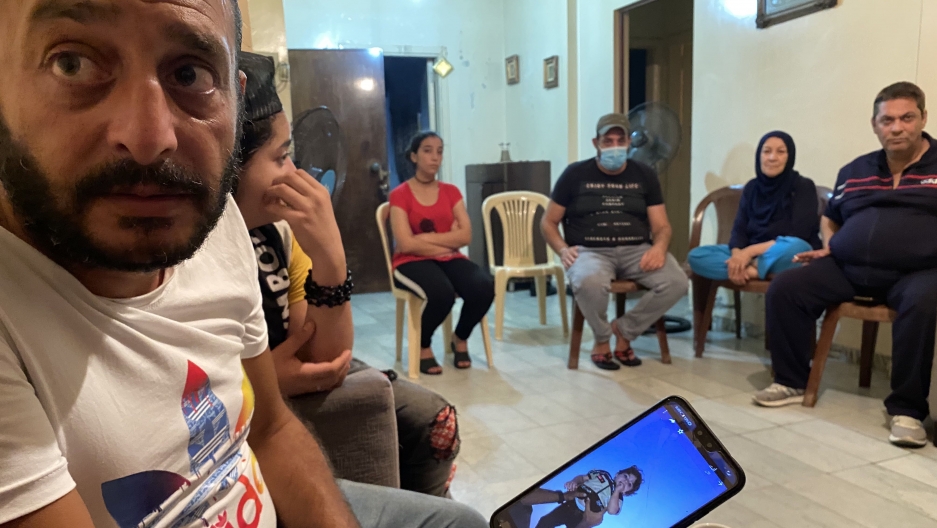 Nazeer Mohammed shows a photo of his 1 1/2-year-old son on the boat to Cyprus.

In early September, Zeinab Kaak and Nazeer Mohammed sold almost everything they owned: their home, television, furniture, household goods, even Kaak’s jewelry — all to raise the 15 million Lebanese pounds, or about $2,000, which smugglers asked for to take them to Europe.

Mohammed had gone down to Tripoli’s beachfront looking for smugglers: “Everyone knows about it. When you walk on the Corniche, you can hear people going. You can see people going. Everyone is doing it.”

He’s talking about the lengths that people are going to escape Lebanon — taking dinghies and small boats to reach Cyprus, an EU nation just 100 miles off of Lebanon’s northern coast.

Until recently, it was mostly Syrian and Palestinian refugees making the trip, but increasingly, Lebanese citizens are filling the boats. It’s difficult to know how many Lebanese have chosen the illicit route by sea, but the United Nations Refugee Agency says at least 18 boats attempted the trip between Aug. 29 and Sept. 14. That’s more than the whole of 2019.

Lebanon is suffering its worst financial crisis in decades. The Aug. 4 blast that destroyed the Beirut port also shattered the last bit of hope many had in their country, and any trust they had left in their leaders.

Half of the Lebanese are now living below the poverty line, and there is little hope in sight. Political paralysis is holding up reforms that could unlock badly needed aid and loans. And in the meantime, people are growing increasingly desperate.

Mohammed used to work as a car mechanic, but it was casual labor. As the financial crisis hit and was compounded by COVID-19, his work dried up.

“People don’t even have money to fix their cars anymore. The small parts that cost [15,0000 Lebanese pounds] before now cost 70,000 Lebanese. People don’t have the money.”

“People don’t even have money to fix their cars anymore,” Mohammed said. “The small parts that cost [15,0000 Lebanese pounds] before now cost 70,000 Lebanese. People don’t have the money.”

The cost of almost everything has gone up, but most salaries have not. Diapers have doubled in price, the cost of bread has also increased, and milk formula has tripled in price.

‘No more safety in Lebanon’

Kaak and Mohammed had long wanted to go abroad, but the Beirut blast was the final push.

“There is no more safety in Lebanon,” Kaak said.

So, on Sept. 7, Kaak, Mohammed and their four children climbed in a boat with dozens of others.

“The first night was fine. The waves were calm,” Kaak said. 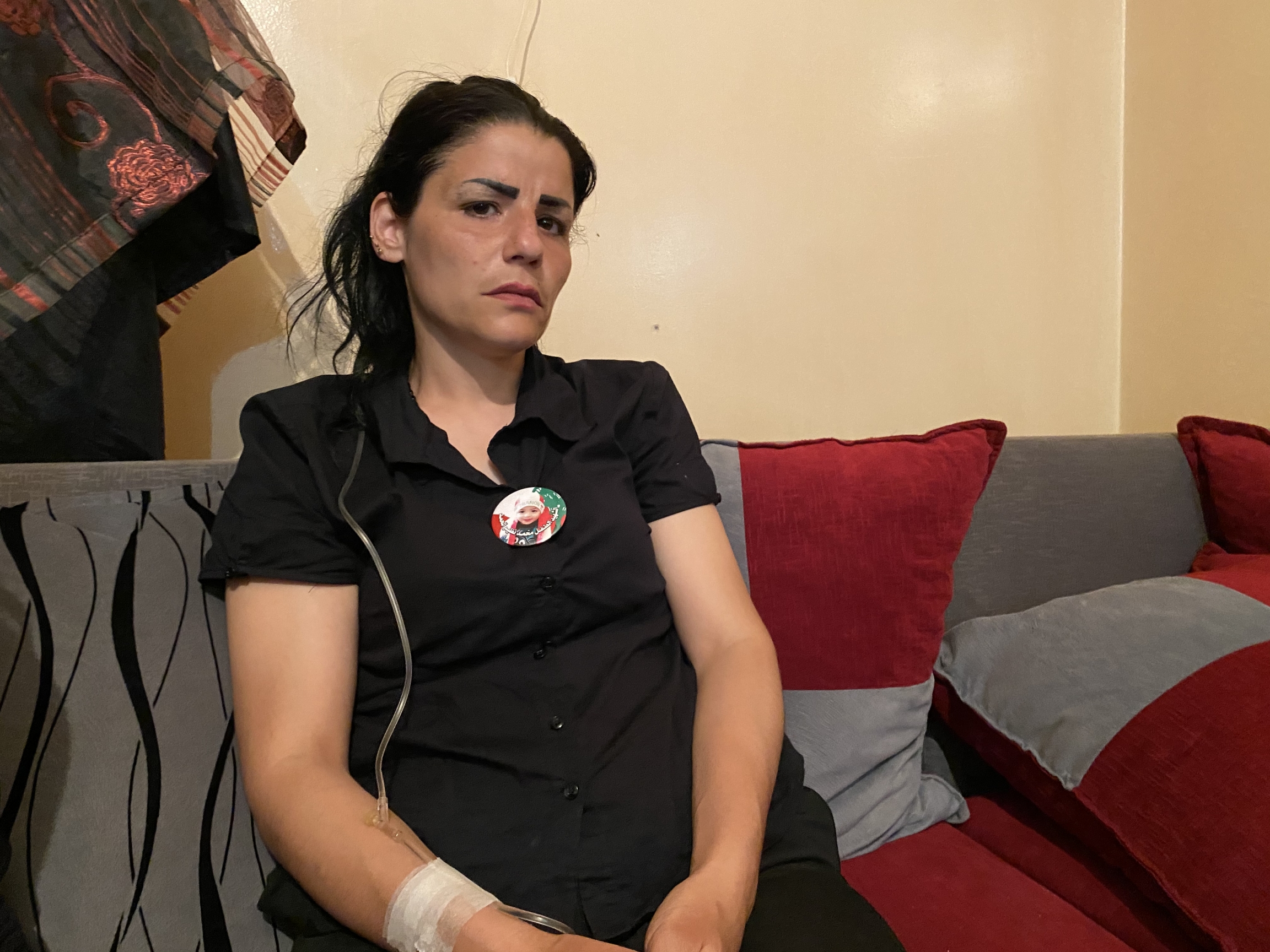 Zeinab Kaak is pictured at her father-in-law’s home in Tripoli.

Mohammed pulled up a photo on his phone of that first day on the boat. In it, he holds their 1 1/2-year-old son in the air. The sun appears just to be rising, and the child’s dark curls are blowing in the wind.

By the afternoon, it was clear they were lost. The smugglers had tasked one of the other migrants with driving the boat.

“They just gave him a compass and said, ‘Go on this specific number,’” Kaak said. “But he didn’t know how to use it.”

They were stranded in the Mediterranean Sea. First, the fuel ran out. Then the food and water. There was no cellphone reception, and no way to call for help. They started filling diapers with seawater, trying to filter it so they could wet their mouths under the beating sun. Kaak could see that their son’s small body couldn’t take the conditions, but there was nothing she could do.

Her husband pulled up a video on his phone from before they tried to go to Cyprus. In it, their son dances around the living room in a shirt with a bunny on it while his family claps to cheer him on.

Kaak broke down at the sound of her son in happier days. She said the others onboard told her it was better to remember him like this and let him go.

She held his body for three days after he died on the boat. His body had begun to bloat. 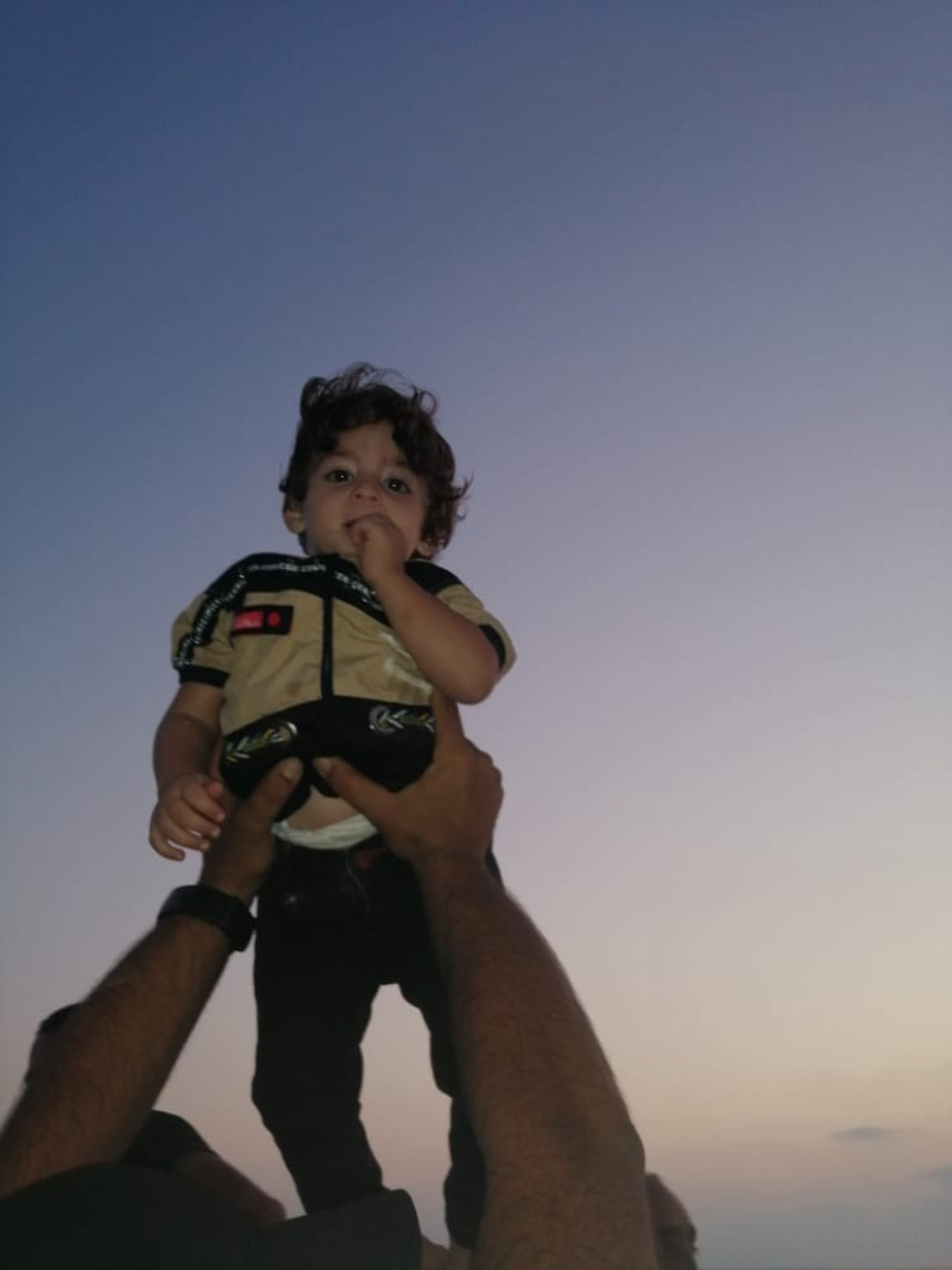 Nazeer Mohammed and Zeinab Kaak’s 1 1/2-year-old son is pictured on the boat to Cyprus.

They wrapped his body in blue jeans and released him into the water. Kaak’s father-in-law said that the blue jeans helped him identify his grandson last week after his body was pulled from the sea.

When another young man passed away on the boat, the migrants attached a note to his body before pushing him overboard.

“We have dead kids, and we don’t have fuel or water. Someone come please and help us … save us.”

“We have dead kids, and we don’t have fuel or water,” the note read. “Someone come please and help us … save us.”

When people on the boat began dying, 24-year-old Mohammed Hosni had jumped in the water and swam off to find help.

His brother, Ali Hosni, said the family was suffering the force of Lebanon’s economic crisis. The brothers took turns driving Ali Hosni's taxi cab, but they only brought home around 50,000 Lebanese pounds a day, worth about $7 now. The whole family chipped in to raise the 5 million Lebanese pounds, about $650, to get Mohammed Hosni a seat on the boat to Cyprus. The plan was he’d get to Europe, get a job and send money back for the family. None of the other five siblings have work. 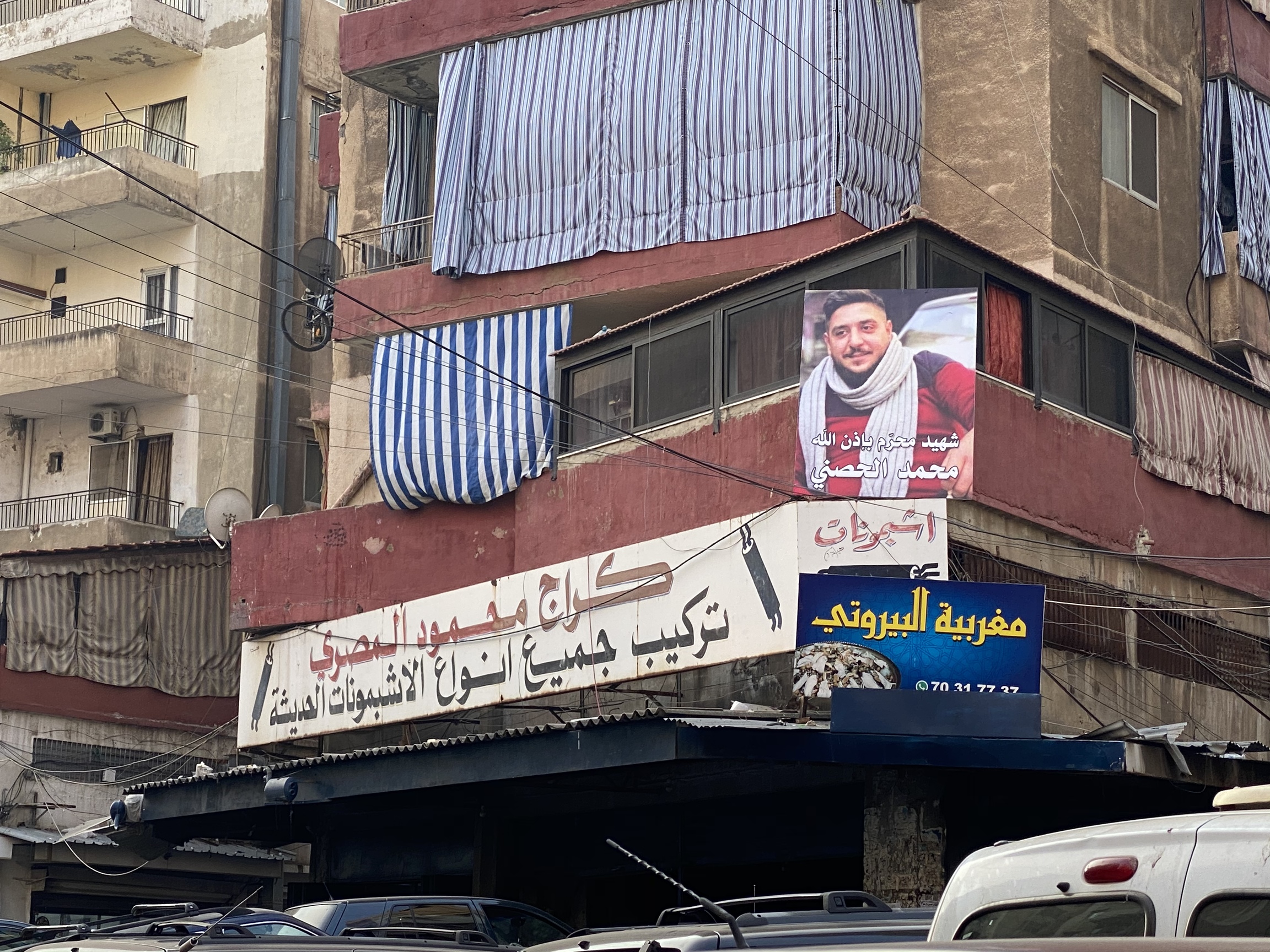 A picture of Mohammed Hosni hangs in the streets of his Tripoli neighborhood.

“That was the plan. Everyone that went there, that was their plan. Find a good job and start sending money to the people here and don’t let them need anything from anyone else.”

“That was the plan. Everyone that went there, that was their plan,” Ali Hosni said. “Find a good job and start sending money to the people here and don’t let them need anything from anyone else.”

Instead, friends and family gathered in the streets to receive his body as it was brought back to Tripoli this month, after being pulled from the water near Beirut.

The day after his body was returned, Mohammed Hosni’s brother, Ali Hosni, held what he calls a wedding, not a funeral. Long tables were set in the center of their street in Tripoli. People gathered around on plastic chairs. Ali Hosni says all his brother wanted was to leave Lebanon for a better place, and in the end, he succeeded.

Both Ali Hosni and Kaak say they don’t blame the smugglers for what happened, but the government who put them in that situation. 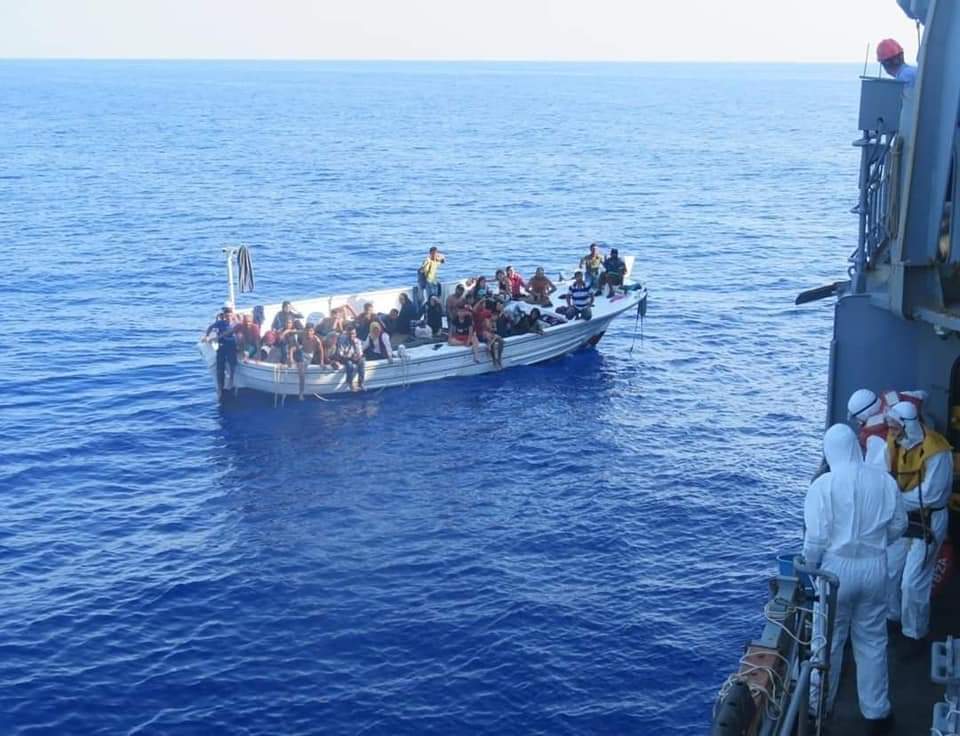 The boat that Zeinab Kaak and Nazeer Mohammed took trying to get to Cyprus was rescued after being stranded at sea.

After eight days at sea, the boat was finally rescued by a Turkish ship and brought to the blasted out port in Beirut. Kaak, who had lost her son, refused to get off the boat.

“I didn't want to come back,” she said. “I kept hanging on to the rails of the Turkish ship.”

Kaak and Mohammed have come back to even less than they had before. No house, no furniture and without their youngest child.

But when asked if she would do it again, Kaak answered quickly: “Yes.”