Republican President Donald Trump, up for reelection in five weeks, has rarely shown concern for climate woes that look increasingly difficult to manage. Instead, he has emphasized an economic agenda that prioritizes more growth and less red tape, rather than actively reducing carbon dioxide emissions that cause global warming.

Democratic challenger Joe Biden, on the other hand, has been offering increasingly ambitious proposals in an attempt to accommodate the progressive wing of the Democratic party. His plan would dramatically limit greenhouse gases, focus on building green infrastructure with union jobs and rejoin the Paris accord — resuming US climate leadership in a crisis that transcends borders.

Here’s where the two stand on the impact of natural disasters, environmental justice, the Green New Deal, carbon tax and the US role in the fight against climate change:

While the US has always suffered from some extreme weather events, especially late-summer hurricanes on the Gulf Coast and fires out West in the fall, the ferocity of these dangerous phenomena has recently intensified. Cyclones appear to pack much more punch and fires — occurring earlier in the year — have ravaged California and other states in exceptionally hot, dry and windy conditions.

Amid unprecedented blazes, farmworkers have had to endure smoky air with a lack of labor regulations to protect them from particulate matter raining down from the skies. Millions of acres have burned down, with the air quality index reaching levels considered highly unhealthy.

During his visit last week to see the devastation wrought by the flames on the West Coast, Trump cited failures by local officials to contain the forestry management problem, and for apparently letting leaves accumulate on the ground. Biden, on the other hand, delivered an outdoor address on Sept. 14 in Delaware, calling his opponent a “climate arsonist.”

“If we have four more years of Trump’s climate denial, how many suburbs will be burned in wildfires?”

Biden has highlighted how the White House demonstrates hostility to science in dealing with both climate change and the coronavirus. Moreover, he ties together these dual challenges with the economy and widespread social justice protests in cities across the US.

“[Trump] fails to protect us from the pandemic, from an economic free fall, from racial unrest, from the ravages of climate change,” Biden said. “It’s clear that we’re not safe in Donald Trump’s America.”

Biden’s running mate, Kamala Harris, is the lead Senate sponsor of the Climate Equity Act, which would provide front-line communities and communities of color more leverage on environmental justice issues. 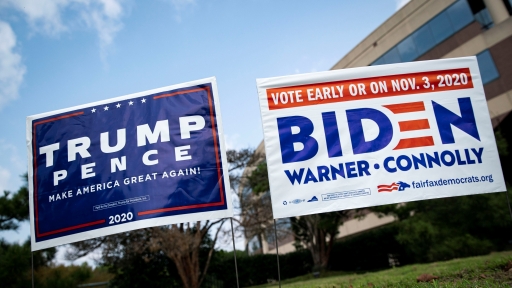 Yard signs supporting US President Donald Trump and Democratic US presidential nominee and former Vice President Joe Biden are seen outside of an early voting site at the Fairfax County Government Center in Fairfax, Virginia, Sept. 18, 2020.

Rather than citing environmental equity, Trump’s campaign website highlights the many areas where he has already rolled back environmental protections. The Department of the Interior has expanded offshore oil and gas drilling in the Gulf of Mexico. The Trump administration has pushed infrastructure projects such as the Keystone XL and Dakota Access pipelines and reversed former President Barack Obama’s moratorium on new leases for fossil fuel development on federal land. Trump has also promoted energy exports to the global market as a big part of enhanced US energy independence.

There are a plethora of other Obama-era regulations that Trump has repealed, including the Clean Power Plan, which Trump said would increase electricity prices for ordinary Americans. Environmental advocates fear his new Environmental Protection Agency rule — known as Affordable Clean Energy — is far weaker than before. The EPA has also rescinded Obama’s methane emissions regulation and is working to relax fuel economy standards. EPA Chief Andrew Wheeler says such moves will continue if Trump is reelected.

In July, the Biden campaign released its $2 trillion climate proposal with a focus on jobs. The plan is broader and envisages quicker implementation than his original vision from 2019. It sets an aggressive new target for clean energy, with electricity carbon-free by 2035 and the whole economy net-zero with greenhouse gas emissions by 2050.

The Democratic candidate sees climate legislation as a massive employment opportunity and the ideal pathway to invest in mass transit, renewable energy and building efficiency. On his campaign website, Biden says he “believes the Green New Deal is a crucial framework for meeting the climate challenges we face.”

Biden would compel the US government to purchase electric vehicles to jumpstart the automotive sector by creating 1 million new jobs in the industry that makes cars and trucks.

As with the federal Green New Deal proposed in 2019 by Massachusetts Sen. Ed Markey and New York Rep. Alexandria Ocasio-Cortez — which stalled due to Republican resistance — Biden would need Congress to go along with his ideas. And the business community could offer stiff resistance to new laws proposed by Biden requiring polluters to bear the cost of their carbon emissions.

Last month, Axios reported that Biden is unlikely to pursue a carbon tax if he’s victorious in November, despite his campaign endorsing such a strategy last year. Rather than imposing a price on emissions, he has embraced mandates, infrastructure investment and equitable job creation as the US struggles to recover from a recession, induced by the pandemic.

Many economists and businesses say that a carbon price would be the most direct and comprehensive way to cut emissions across the board. However, many Democrats now argue that a market-based approach would not entail steep enough emissions reductions.

An increasing number of lobby groups and big corporations have begun to back a carbon tax, but the effort has yet to materialize. One version proposed by the Climate Leadership Council would send funds back to every American in the form of dividend checks. Several notable Republicans, oil companies and environmental organizations support the idea.

If Democrats win control of the Senate, a carbon price bill introduced by Illinois Sen. Richard Durbin could generate bipartisan consensus and end up on the president’s desk.

Trump has set in motion US withdrawal from the Paris climate agreement, but that won’t take place until the day after Election Day.

Trump has set in motion US withdrawal from the Paris climate agreement, but that won’t take place until the day after Election Day. Biden has promised to jump back into the treaty. One prominent subnational leadership drive by cities and states, America’s Pledge, recently stated — perhaps surprisingly — that “non-federal actors have successfully counterbalanced the climate denial and obstruction from the White House.”

Related: The world is watching: 2020 US election will have a big impact on global climate politics

For his part, Biden’s new concepts are more domestic-focused, rather than primarily emphasizing climate diplomacy, ending fossil-fuel subsidies globally, and leaning on China — which just announced at the UN a 2060 net-zero target — to reduce emissions further.

But his plan still focuses on China as the country to beat in developing a high-tech clean energy economy at home. And Biden says he would also rigorously enforce competitive trade rules on Beijing.

With Climate Week NYC again coinciding with the UN General Assembly this week, world leaders and activists are watching to see if the American public will — come November — choose the path of global consensus or give more importance to the economy than to health and the environment.