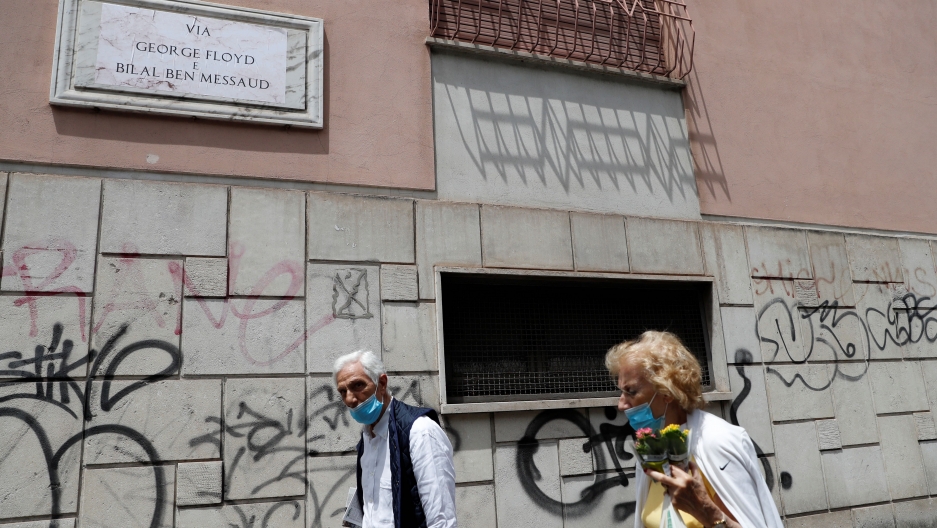 People walk near the former street sign for Via dell'Amba Aradam named after the Battle of Amba Aradam, when colonial power Italy attacked Ethiopia in 1936 — which has been replaced by protesters against racism with a sticker reading, ''Via George Floyd and Bilal Ben Messaud," to honor the death of Floyd in police custody, and migrant Messaud who died after jumping from a quarantined ship near Sicily, in Rome, June 19, 2020.

Willy Monteiro Duarte was born in Rome to parents from Cape Verde. He had just become an Italian citizen, and at 21 years old, was an aspiring chef at a hotel in a town near Rome.

All of that ended on Sept. 6 when he tried to break up a fight — and instead was beaten to death himself.

Italian Prime Minister Giuseppe Conte attended Duarte’s funeral earlier this month, and hundreds marched in a candlelight procession to call for justice for the young Black man. Two white brothers were arrested in Duarte’s death and have been charged with murder, while some believe they should also be charged for committing a hate crime.

The incident has exposed a deep divide among Italians over which crimes should be considered racially motivated.

“In this case, based on the facts that we know, we do not know, in the end.”

“In this case, based on the facts that we know, we do not know, in the end,” said Giulia Perin, an attorney with the Italian Association for Juridical Studies on Immigration, adding that there needs to be concrete evidence of racist motivations to be considered a hate crime.

“This could be done if, for instance, we know at that instant that the boys were shouting, ‘You are Black,’ or something, but that’s not the case.”

Others say Duarte’s death is evidence of growing fascism in Italy, pointing to the hobbies and interests of the brothers accused of Duarte's killing. Gabriele Bianchi, 26, and Marco Bianchi, 24, were into bodybuilding and mixed martial arts. They have pleaded innocent.

“Fascism in Italy has this history of the cult of the male body, of the strong body, of the strong myth of Rome that ruled the world and so on — a myth of domination,” said Marcello Maneri, an assistant professor of sociology at the University of Milan Bicocca who studies race and power.

“These people [the two brothers] acted like they owned the community," he said. “They wanted to patrol their territory. In the end, I think when they saw this Black guy, they thought, ‘We are the people who must control this territory, not him.’”

And that’s a fascist instinct, he said.

“Fascism, as it was developed and implemented and experienced here in Italy, had a very racist dimension to it.”

But “fascism, as it was developed and implemented and experienced here in Italy, had a very racist dimension to it,” said Judith Sunderland, the Milan-based acting deputy director of Europe for Human Rights Watch. She argued the brothers' behavior can be fascistic and racist.

“And it's unfortunate that so much of the conversation has revolved around this insistence on, ‘It’s not racism. It was all these other things, but it absolutely wasn't racism,’” she said, “because that means that people aren't ready for the kind of reckoning that is necessary in order to really address systemic discrimination and racism in our society.”

Last week, Duarte’s family released a statement saying they didn’t want their son’s death to be used as a political tool to talk about racism or fascism. They wrote: “Willy was the victim of cruelty and unjustified ferocity, which had no color or race.”

“I understand. I think I can understand,” said Ariam Tekle of their statement. She’s a daughter of Eritrean immigrants, and her 2017 documentary, “Appointment to the Sailors” (translated to English), explored the lives of children of immigrants in Italy.

Related: Somali Americans share in the grief and pain over George Floyd’s killing

Tekle doesn’t know the Duarte family but speculates they were trying to fend off racist attacks online. She believes if Duarte had died in the US, there would be a larger mainstream discussion about racism.

“For me, it’s obviously a racist act,” she said. “It’s a bit dangerous saying it isn’t racist because it is.”

And, as long as Italians don’t recognize racism, she said, they won’t be able to address it.